Accessibility links
State Of The Union: 7 Takeaways From President Trump's Address The president made the case for his agenda, not bowing to the new divided-government power dynamic in Washington. And he did not appear ready to negotiate to avoid another partial government shutdown. 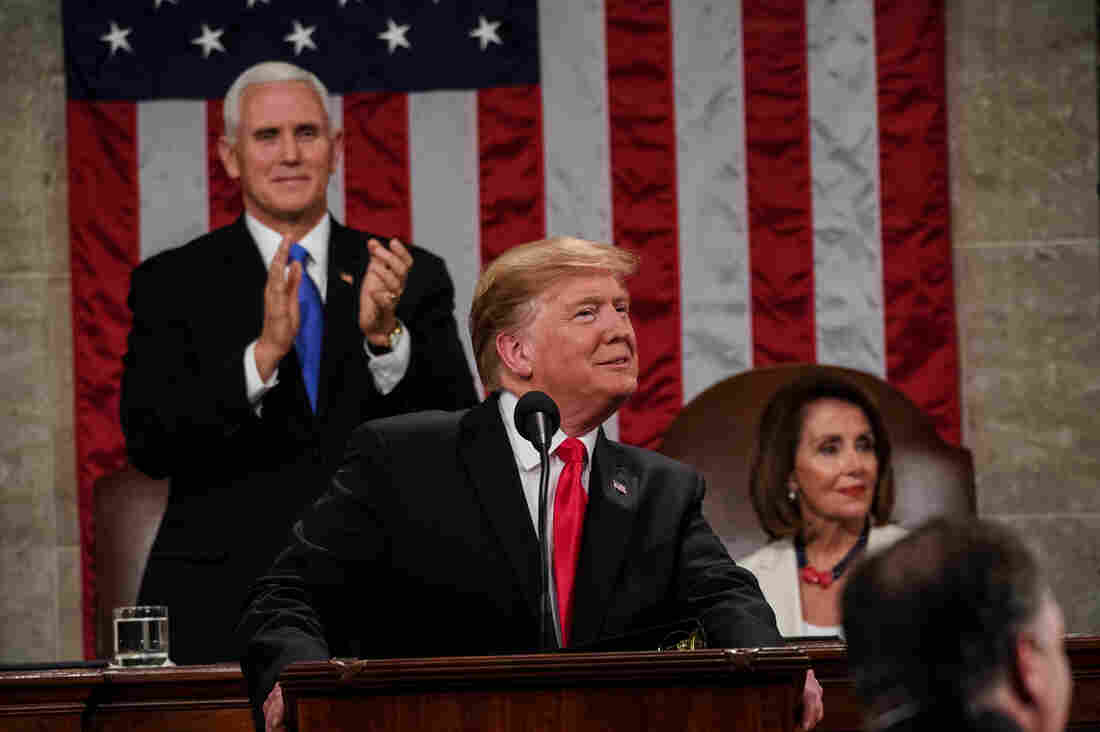 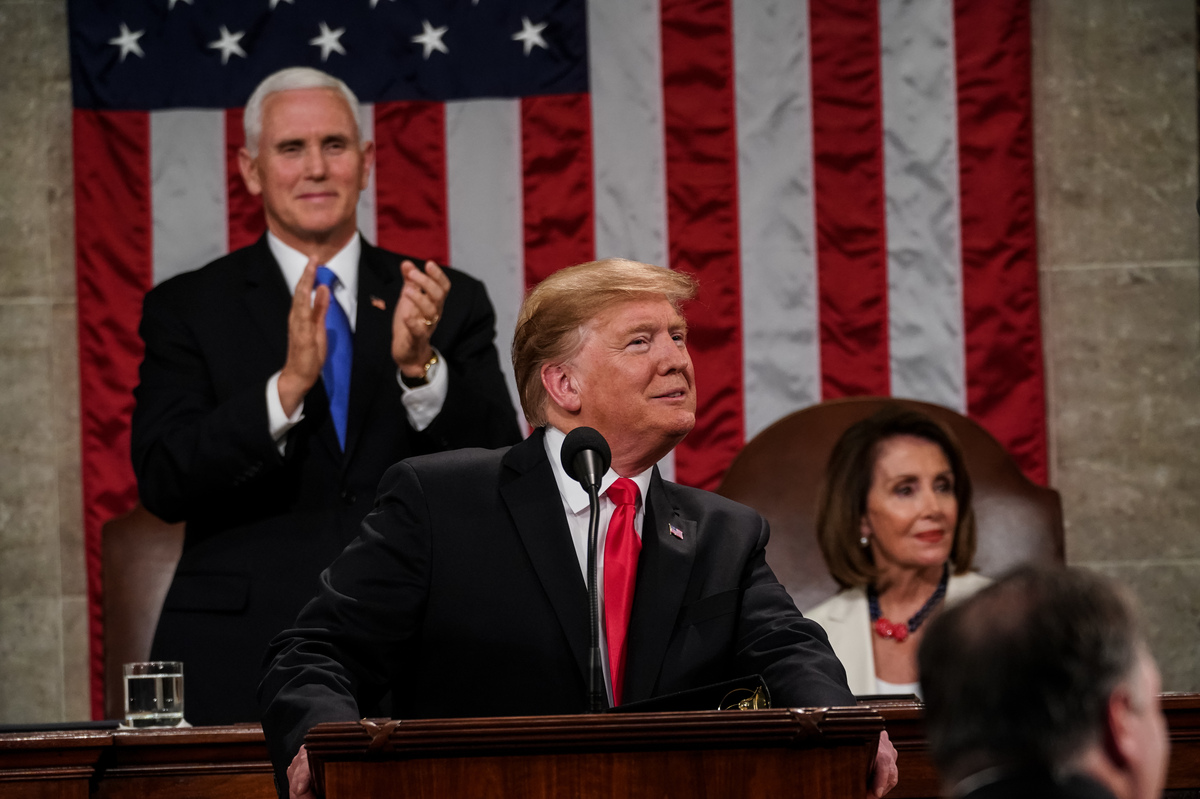 President Trump delivered his second State of the Union address Tuesday with House Speaker Nancy Pelosi, D-Calif., and Vice President Pence behind him.

President Trump delivered a wide-ranging State of the Union address Tuesday night that went an hour and 21 minutes. That's the third-longest ever.

So what should we make of Trump's third address to Congress, and in a year when Democrats are gearing up for a crowded primary to decide who will face Trump in 2020?

1. Trump did not acknowledge the new political reality in Washington

Each of the past four presidents, including Trump, had lost the House at some point during their presidency. And every one of them that came before Trump — Bill Clinton in 1995, George W. Bush in 2007 and Barack Obama in 2011 — nodded to that change.

Not Trump. Instead, he barreled ahead with pitching his agenda.

But the speech went from optimistic vagueries ("Our most thrilling achievements are still ahead") to misleading fears (calling a new caravan of Central American immigrants a "tremendous onslaught" and describing the Southern U.S. border as "very dangerous" and "lawless." NPR fact-checked the claims here.)

And Trump even fired this warning shot at Democrats about whether anything will get done: "If there is going to be peace and legislation, there cannot be war and investigation."

House Speaker Nancy Pelosi, D-Calif., took that as a threat, saying in a statement after the speech: "[H]e threatened the United States Congress not to exercise its constitutional responsibility of oversight."

3. There was news on North Korea

The only real bit of news in the speech was that Trump announced he would be meeting with North Korean leader Kim Jong Un for a second summit Feb. 27-28 in Vietnam. But the president also raised eyebrows, claiming that if he hadn't been elected, "we would right now, in my opinion, be in a major war with North Korea."

4. There wasn't any progress on avoiding another shutdown

The president spent a good chunk of the speech on immigration. He argued in favor of a wall: "Simply put, walls work, and walls save lives."

And he did not seem like someone ready to negotiate on a wall or border security funding to avoid a shutdown.

"My administration has sent to Congress a common sense proposal to end the crisis on the Southern border," Trump said. "It includes humanitarian assistance, more law enforcement, drug detection at our ports, closing loopholes that enable child smuggling and plans for a new physical barrier or wall to secure the vast areas between our ports of entry. In the past, most of the people in this room voted for a wall, but the proper wall never got built. I will get it built."

Trump also did not mention federal workers or the government shutdown in the speech. So it appears, unless something drastic changes, the country is headed for either another partial shutdown or the president will declare a national emergency.

5. He's running; Trump's speech was aimed at creating a choice between himself and Democrats

Big sections of the speech felt like 2020 messaging. He was reinforcing his base, not just in talking about immigration, but he also denounced abortion in some of his strongest language (using the word "execute," for example). It was also strongly pro-Israel and stressed national security.

When he talked about Venezuela, he used it as an opportunity to tie it back to a criticism of Democrats domestically: "Here, in the United States, we are alarmed by new calls to adopt socialism in our country. America was founded on liberty and independence — not government coercion, domination and control. We are born free, and we will stay free. Tonight, we renew our resolve that America will never be a socialist country."

Trump's speech was billed as one of unity, but he subtly inserted campaign slogans and created a binary choice between him and Democrats, between "greatness" and "resistance."

"We must choose between greatness or gridlock, results or resistance, vision or vengeance, incredible progress or pointless destruction," Trump said early on in his address. "Tonight, I ask you to choose greatness."

He came back to that theme at the end with another campaign theme: "I am asking you to choose greatness ... we must keep America first in our hearts."

6. Democratic women were a show of force 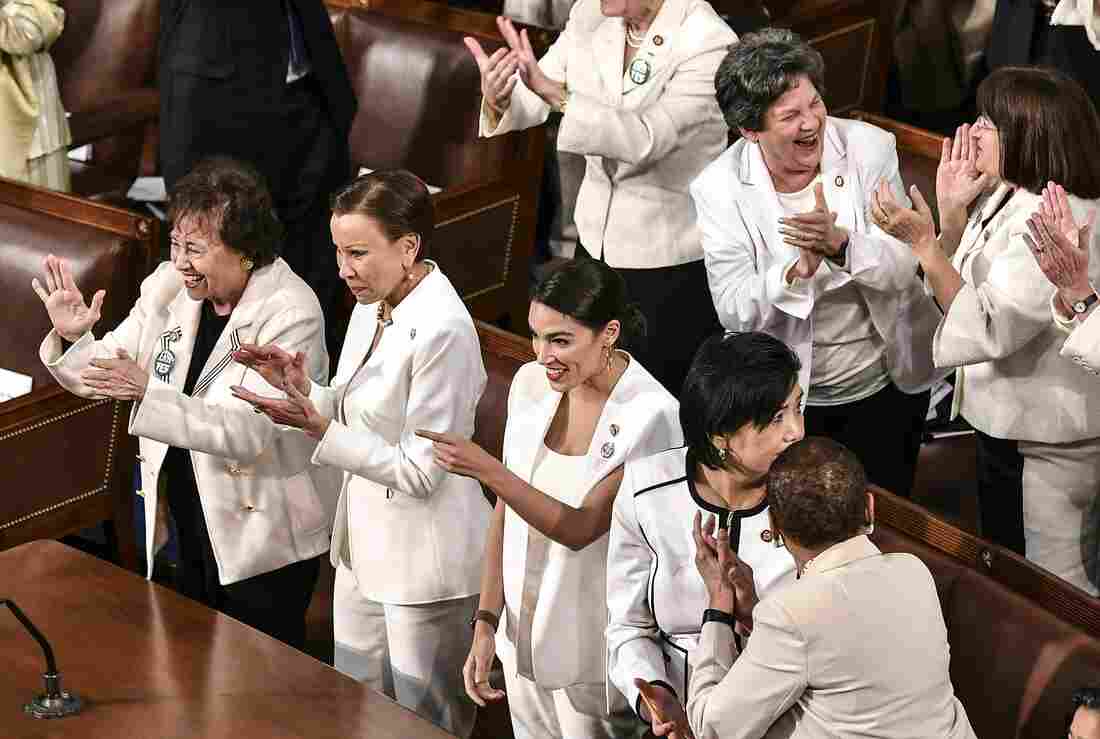 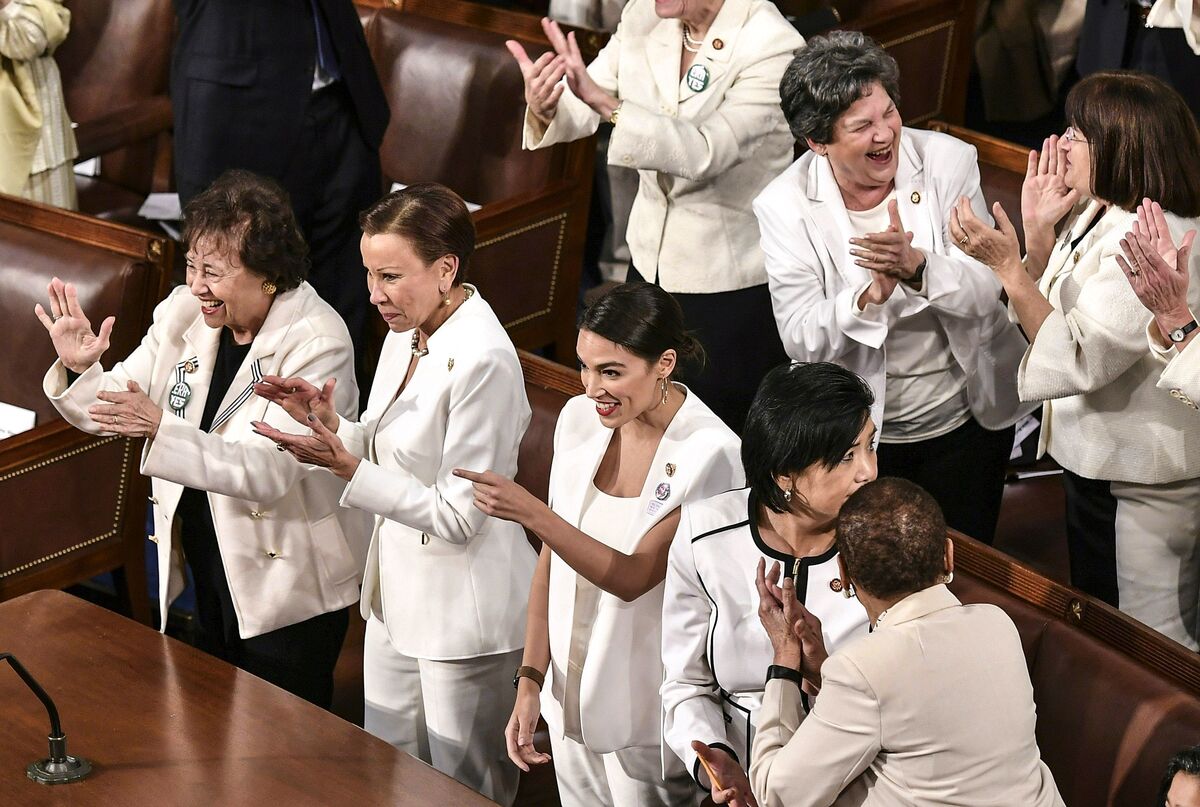 Democratic women, dressed all in white in honor of suffragettes, react as President Trump notes the record number of women in Congress.

One of the moments of levity in the speech was when Trump noted: "No one has benefited more from our thriving economy than women who have filled 58 percent of the newly created jobs last year."

That prompted Democratic women, clad in white outfits in honor of suffragettes, to let out a Bronx cheer. After all, women were a major reason why Democrats took back the House last year. The irony seemed lost on the president, who remarked, "You weren't supposed to do that."

Trump then noted, "We also have more women serving in Congress than at any time before."

But that is entirely because of Democratic women. The numbers of Republican women in Congress actually went down after the 2018 elections.

Delivering the response to the State of the Union has been a tough task over the years, but Georgia Democrat Stacey Abrams held up. There was no awkward walk down stairs, no desperate reaches for water and no fumbles. She made her case, slammed Trump over the recent partial shutdown and even said she didn't hope for his failure.

State Of The Union: 'Tonight, I Ask You To Choose Greatness,' Trump Says

The bottom line is Abrams, who narrowly lost her bid for governor in 2018, did nothing to dissuade Democrats from wanting her to run for the U.S. Senate seat in Georgia in 2020.

Clapping, Sleeping, And Serenading: The State Of The Union's Evocative Moments