Accessibility links
Matt Gaetz Tries To Remove Parkland Fathers From Gun Violence Hearing Republican Rep. Matt Gaetz called for the chairman of the House Judiciary Committee to eject two fathers of gun violence victims from a hearing after they interrupted his remarks from the audience. 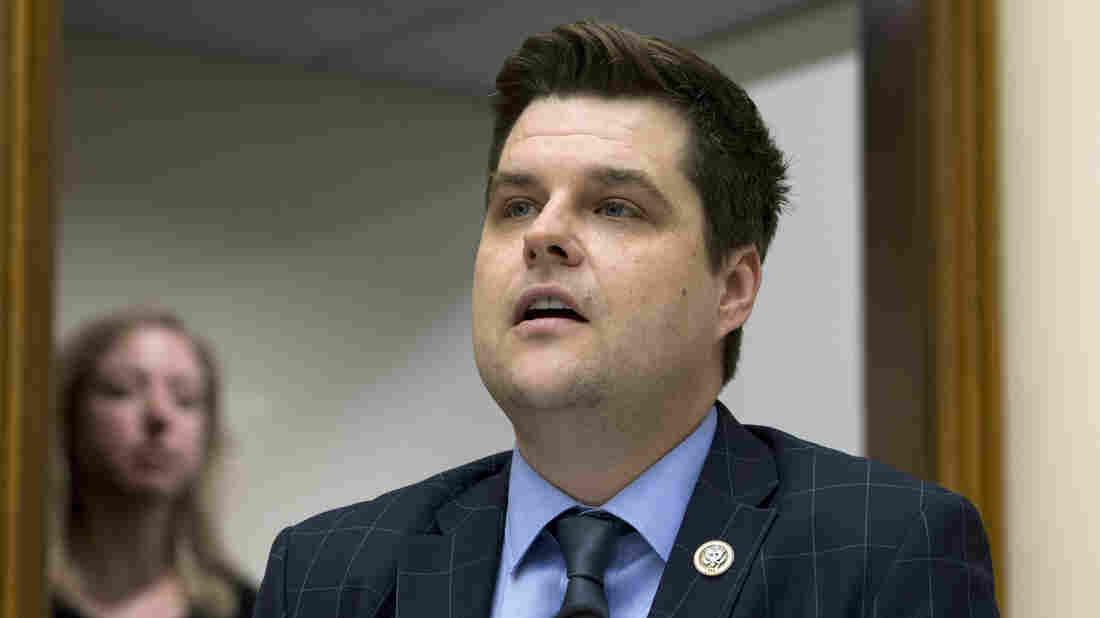 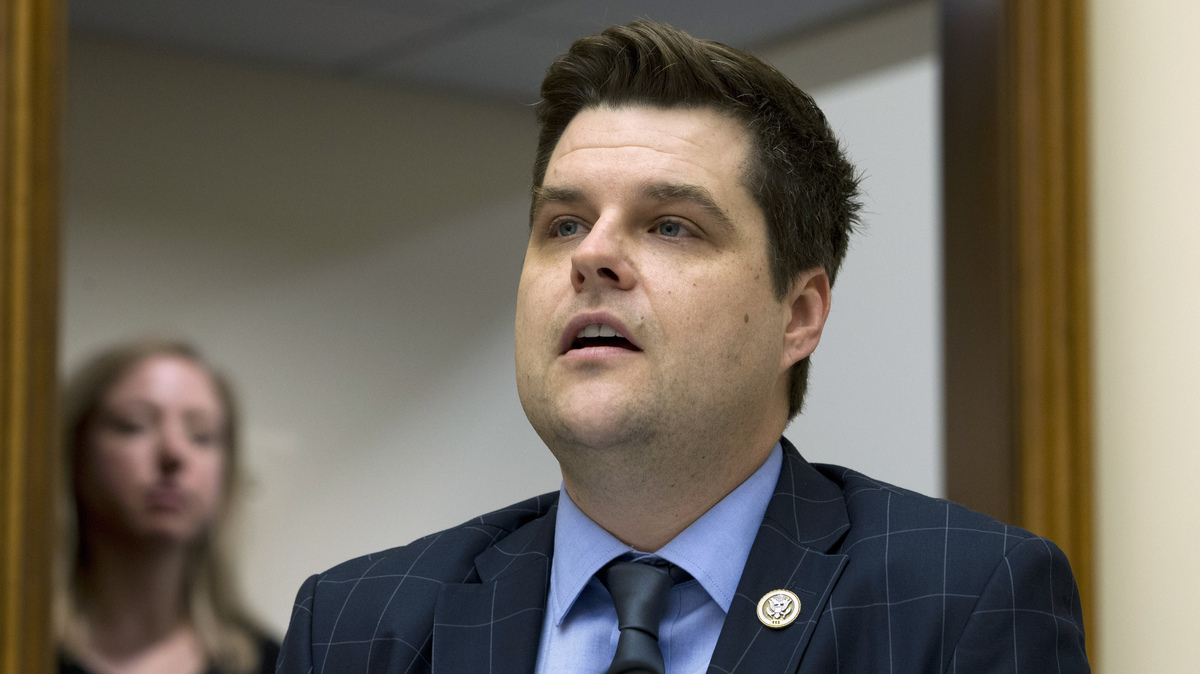 Rep. Matt Gaetz, R-Fla., a member of the House Judiciary Committee, injected the immigration debate into a hearing on gun violence prevention.

A longtime Trump ally pushed to have two fathers of Parkland victims tossed out of a congressional hearing on gun violence — a reflection of the vociferous nature of the debate Democrats have made a priority in the new Congress.

Rep. Matt Gaetz, R-Fla., sparked commotion in the hearing when he listed circumstances in which violence was committed by undocumented immigrants, and said the solution would be to build the Trump-backed wall along the Southwest border.

"I hope we do not forget the pain, and anguish, and sense of loss felt by those all over the country who have been the victims of violence at the hands of illegal aliens," Gaetz said. "[Firearms background check legislation] would not have stopped many of the circumstances I raised, but a wall, a barrier on the Southern border may have, and that's what we're fighting for."

This led to protests in the hearing room by the fathers of two Parkland shooting victims, Manuel Oliver and Fred Guttenberg. Gaetz responded by asking for their removal. The public is not allowed to comment during congressional hearings, and the two were given a warning.

Pointing at Oliver and Guttenberg, the Florida Republican continued to press for them to be removed from the room. "I'd observe three interruptions of my time by the same individual, and the chair is not exercising his discretion to remove that individual," Gaetz said.

After the exchange, Guttenberg told NPR what he and Oliver had said to Gaetz in the hearing: "Manny told Gaetz his comments were not true, and I said our loved ones were killed by an American male."

Later, Rep. Steve Cohen, D-Tenn., tried to rebut Gaetz's remarks. Listing off a number of mass shootings, Cohen noted that they were not conducted by immigrants who entered the country illegally.

Sarcastically, Cohen added: "I got confused. I thought illegal aliens, when they got in, they went straight to a taco shop and started killing people. But that doesn't happen?"

The House Judiciary Committee's Wednesday hearing on gun violence was the first of its kind in nearly eight years. The panel has not had a hearing on this topic since Republicans took control of the House in 2011 following the Tea Party wave in the 2010 midterms. 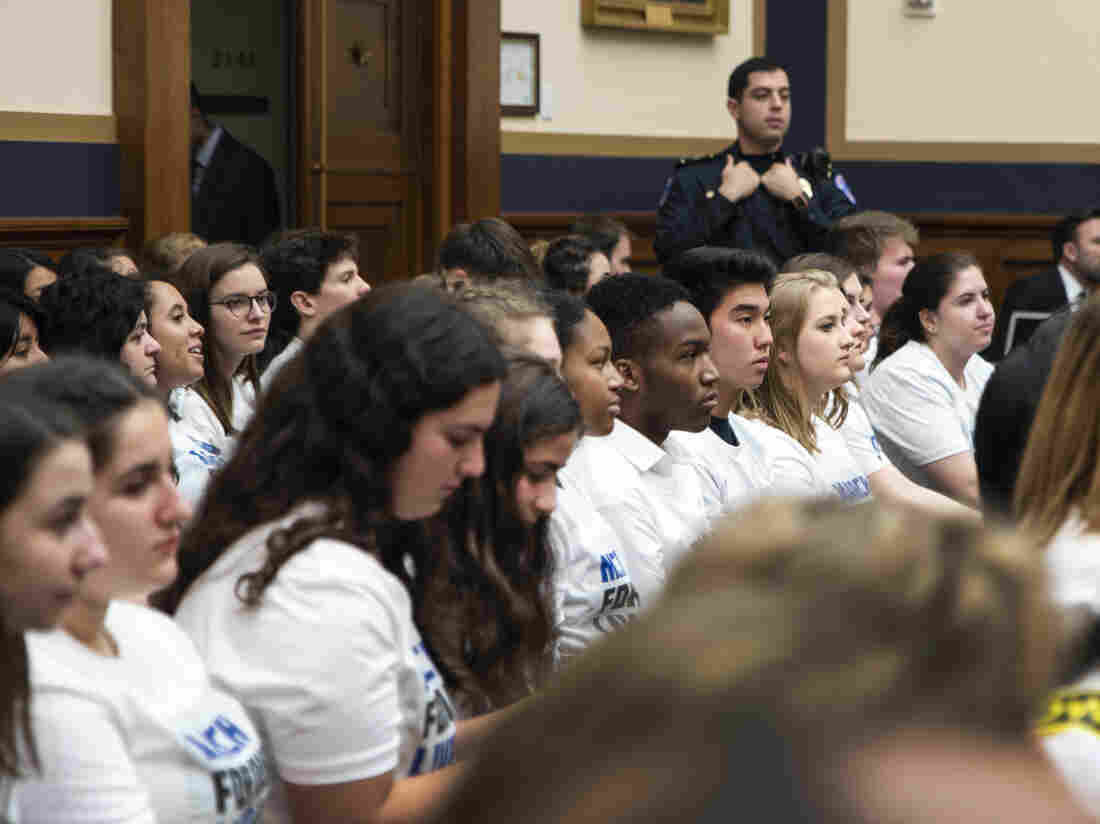 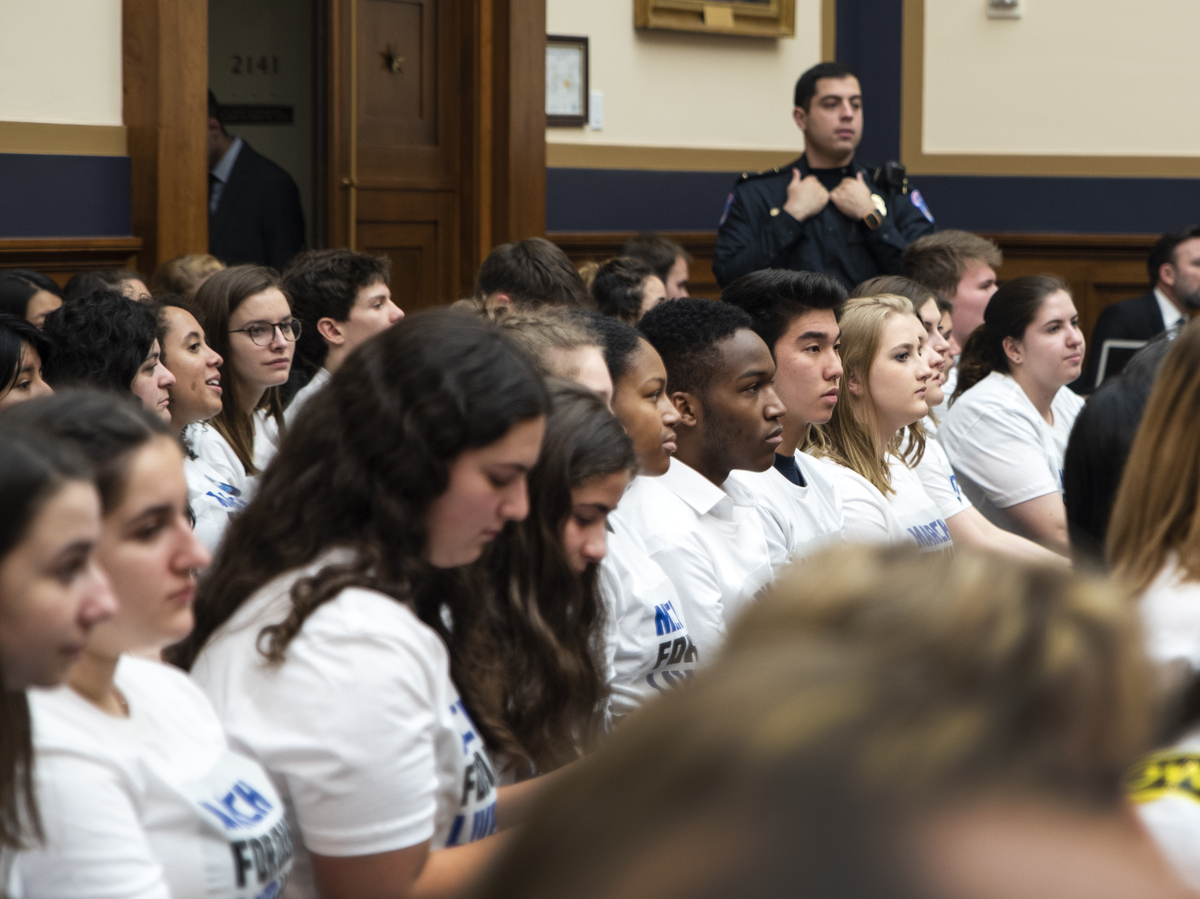 Students and "March for Our Lives" participants listen to the House Judiciary Committee hearing on gun violence at Capitol Hill.

"It's our turn to set the agenda, and listen to the American people," said Rep. Zoe Lofgren, a California Democrat, a nod to the new Democratic majority.

The lobby of Rayburn House Office Building, where the hearing was held, was flooded with young people as early as 7 a.m. — three hours before the hearing was to begin. Students skipped classes and came from as far away as Portland, Ore., to pack the committee room for the hearing.

But the angry exchange between Gaetz and two Parkland victim family members reflected just how far apart Republicans and Democrats are on the issue of firearms legislation.

With Democrats now in control of the House, one of their priorities is to pass gun control legislation — with many members of their conference coalescing around a bill to require background checks on almost all gun sales and most gun transfers — and is co-sponsored by a bipartisan group of 230 lawmakers.

That measure is also supported by Aalayah Eastmond, a survivor of the Parkland shooting, who testified before the committee Wednesday.

"I implore you to pass legislation that would make us all safer. Today in America, anyone can go on the Internet, answer an ad or go to a gun show and buy a gun with no background check required. This makes absolutely no sense," she said, appealing the members on the panel, "I urge you to expand... background checks by voting for H.R. 8, requiring checks for virtually any gun transaction." 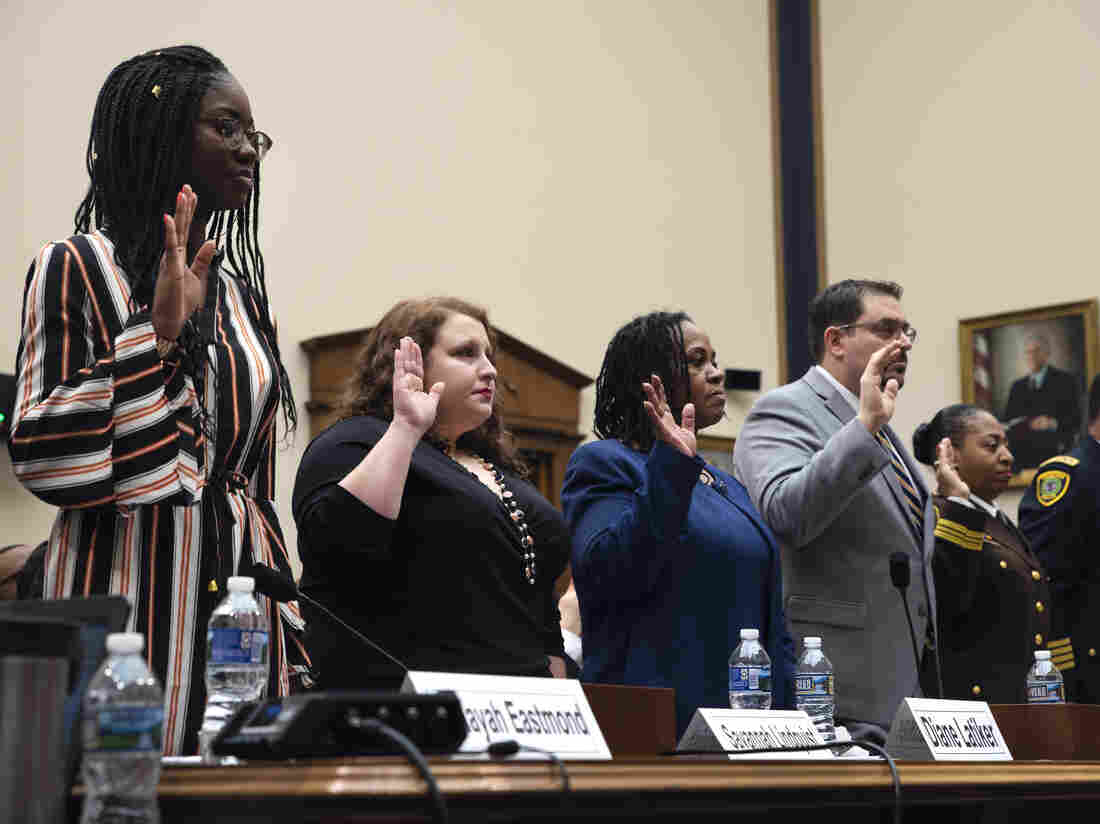 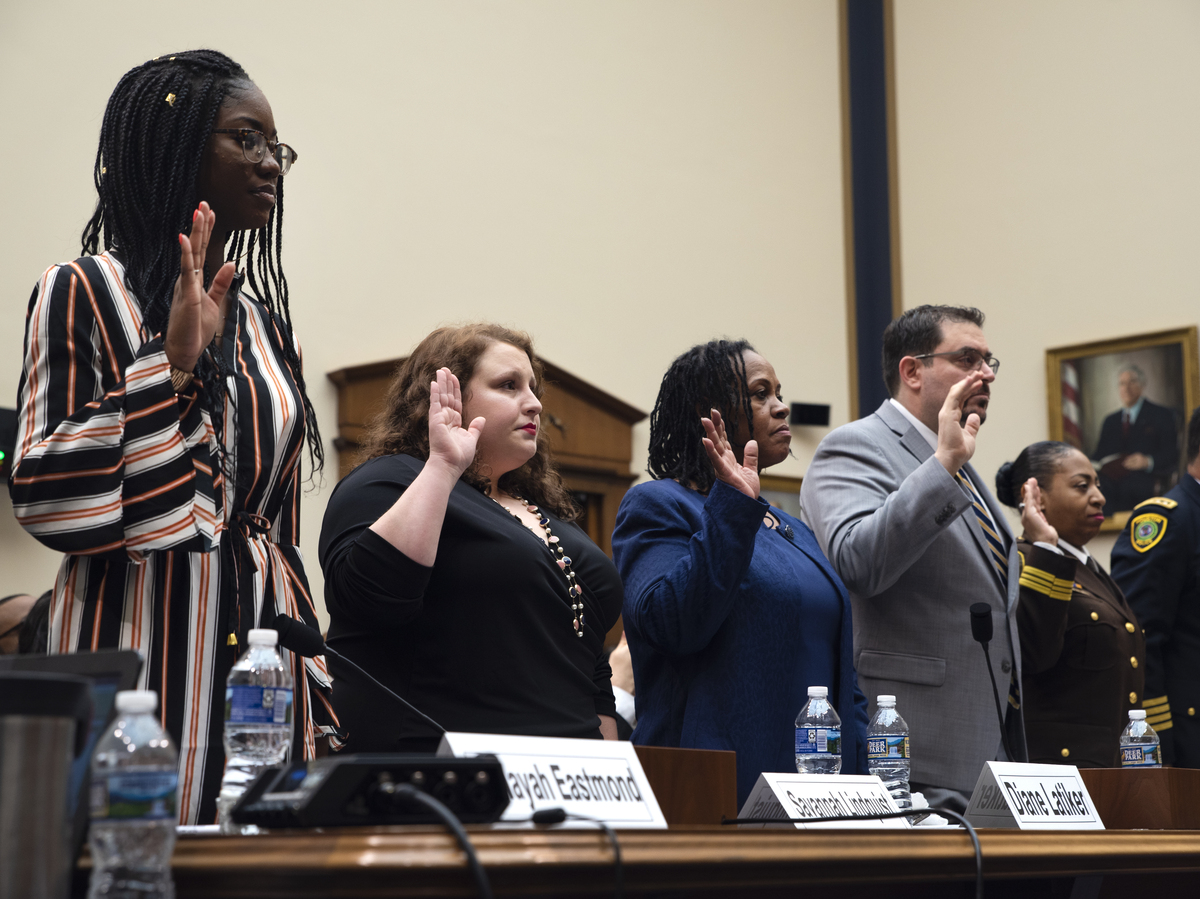 Aalayah Eastmond, Savannah Lindquist, Diane Latiker, and Dr. Joseph Sakran are sworn in before testifying to the House Judiciary Committee.

Republicans oppose the proposal to expand background checks, and instead urged Democrats to focus on mental health and morality.

But Democrats maintained that the problem of gun violence would not be solved merely by addressing mental health.

"I'm sure no one objects to dealing with mental health problems," said House Judiciary Committee Chairman Jerry Nadler, D-N.Y. "[But] gun deaths in most other countries are in the double or triple digits... in our country its 35,000-40,000 per year. Is there any evidence... that mental health differences, that our people are 10,000 times more mentally ill... than people in other industrialized countries?"

The committee heard from a trauma surgeon who was himself a former gun violence victim, a Parkland shooting survivor and the head of the Domestic Violence Unit of the Baltimore City Sheriff's Office, among others. Republicans invited a sexual assault victim who advocates for carrying guns as self-defense and a constitutional scholar who supports the conservative view on the Second Amendment.

The background check legislation is likely to pass the House of Representatives but will run into significant roadblocks in the Senate, which is currently controlled by Republicans.

"In reality, it is going to be tough to clear the Senate," said Robert Schentrup, the brother of Parkland victim Carmen Schentrup. He was in attendance at the hearing and supports the background check bill. "But we think that if we get as much momentum as possible in the House and really show that there is true bipartisan support on this legislation, we can really force the hand of the Senate."