Accessibility links
A Timeline Of Ariana Grande's Road To 'thank u, next' Grande has transformed in the public eye, from a wunderkind with a mighty voice to a figure whose every move seems to redefine what pop stardom can look like. Here's how it happened. 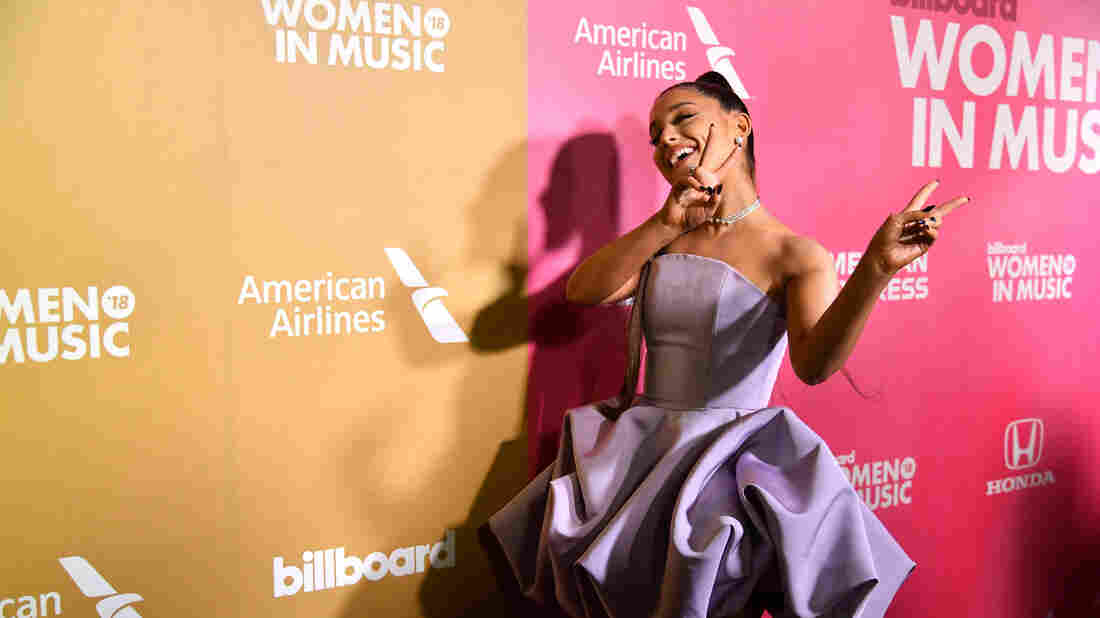 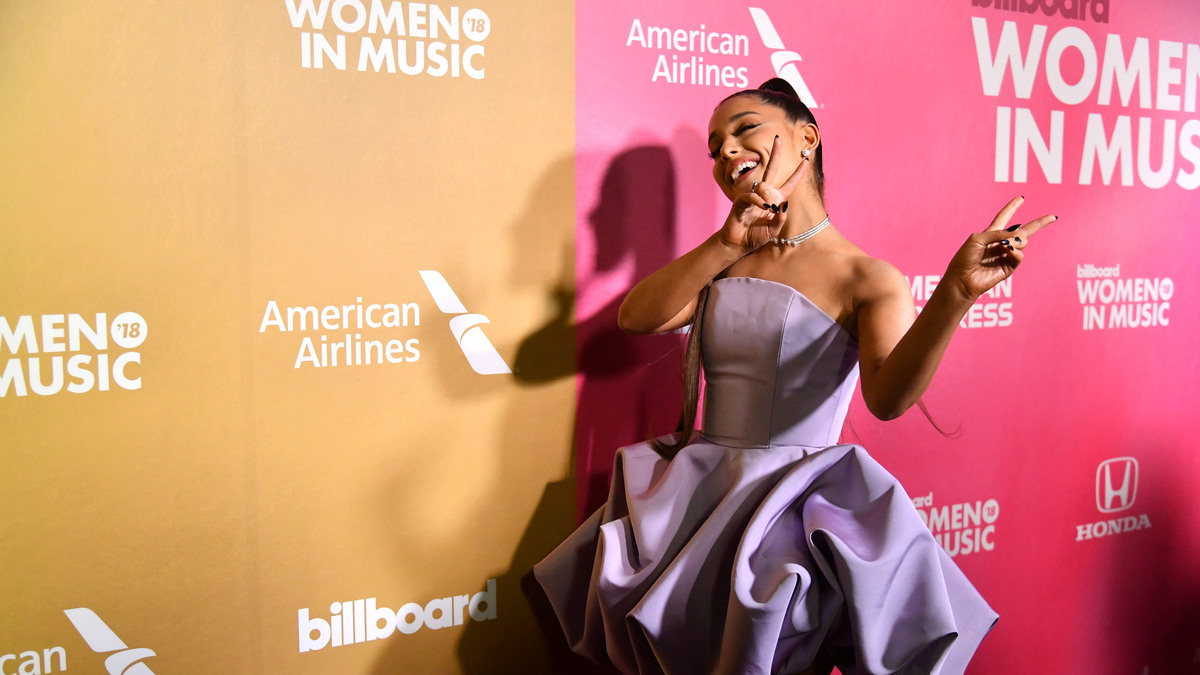 Ariana Grande hasn't always been a superstar, at least not in the world-stopping, internet-breaking way that defines the icons of the current pop generation. But somewhere between her debut in 2013 — which found her stepping out of the Nickelodeon shows where she made her name and into young adult pop and R&B — and the impending release of her fifth album, thank u, next, she has pulled off a rare evolution.

Plenty of artists have channeled real trauma into their work or spun gossip into gold, but particularly in the past year, Grande has seemed to do so almost in real time. In the process, the 25-year-old has transformed in the public eye: from a pop wunderkind with a mighty voice to a figure whose every move of late redefines what modern pop stardom can look like.

thank u, next is out Friday, Feb. 8. Teased in late 2018 with the surprise drop of its confessional title track, it is Grande's most anticipated project yet — promising a glimpse at what her life, as one of the most visible figures in pop culture, looks like in 2019. Here's a timeline of the fervent period leading up to this week's release. 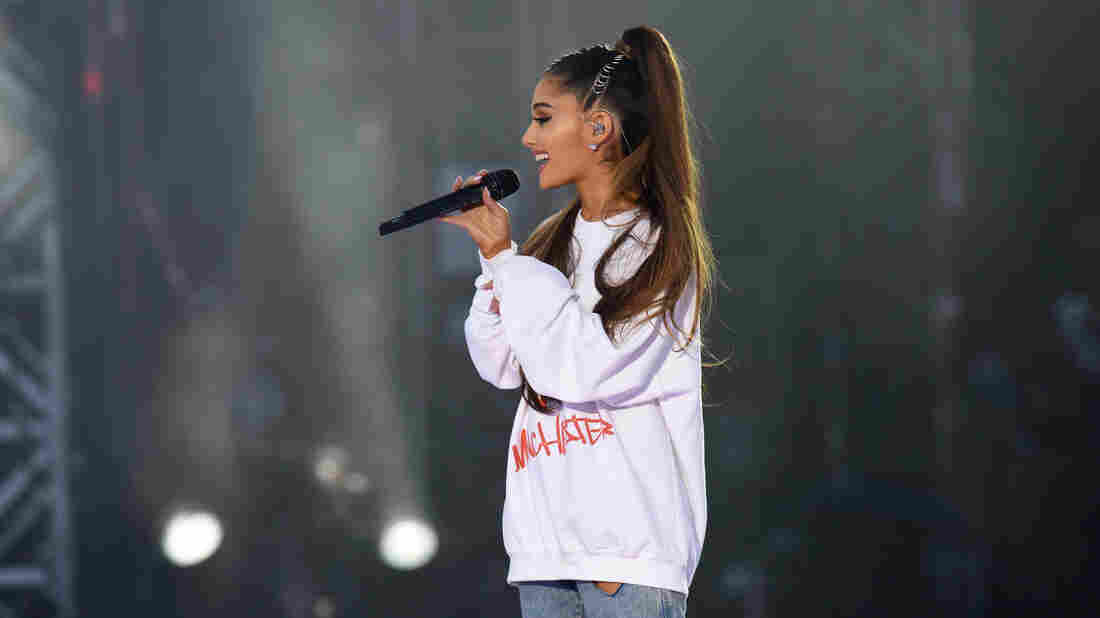 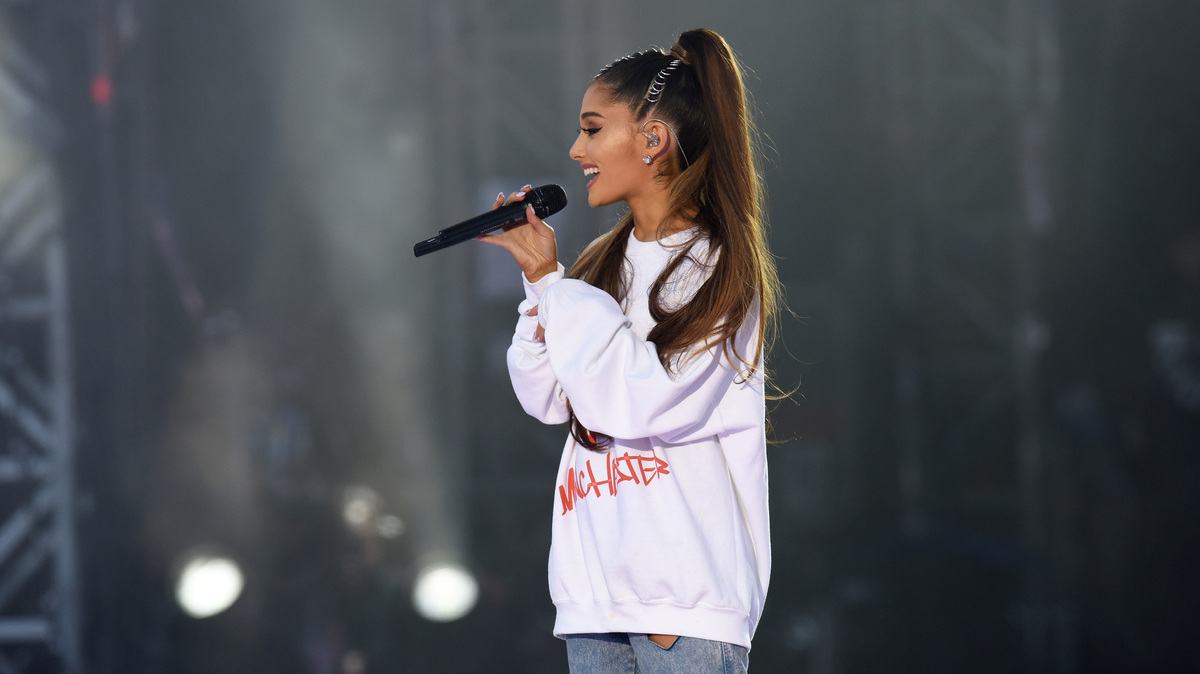 Ariana Grande performs on June 4, 2017 in Manchester, England for the One Love Manchester benefit concert.

At this point, Grande is a star, if not quite a superstar. She has enough traction to host and perform on Saturday Night Live, all while doing voice-over work and duetting with John Legend and Stevie Wonder for movie soundtracks.

While on tour in England behind her third album, 2016's Dangerous Woman, Grande's May 22, 2017 concert at Manchester Arena is struck by a terrorist bombing, the deadliest in the U.K. since the London Underground attacks in 2005, which kills 22 and injures over 100. The artist writes on Twitter, "broken. from the bottom of my heart, i am so so sorry. i don't have words," and postpones her tour.

Two weeks later, Grande returns to Manchester Arena for One Love Manchester, a benefit concert for the families affected, featuring performances by Katy Perry, Coldplay, Justin Bieber and others. Near the end of the event, Grande performs a triumphant, tearful rendition of "Over the Rainbow." She later tells The Fader the song was a favorite of her late grandfather: "When I was getting ready to do it, I was thinking about him and I felt his presence so heavily around me." The concert raises $3 million for the Manchester Emergency Fund, and the city names Grande its first-ever honorary citizen.

"No Tears Left to Cry" song and video released

The first official glimpse of Grande since her tour concluded in fall 2017, "No Tears Left to Cry" is a sonic evolution for the artist, an intimate, dancing-with-tears-in-your-eyes ballad. The single enters the the Billboard Hot 100 at No. 3. A the end of the music video, a bee — known to Britons as a symbol of Manchester — buzzes onscreen, nodding to the city's resilience amid hardship.

After nearly two years of dating and many more of collaborating — beginning with a duet on Grande's first Top 10 song, the 2013 piano-led R&B ode "The Way" — the artist acknowledges on Instagram that she and rapper Mac Miller are no longer together. "I respect and adore him endlessly and am grateful to have him in my life in any form, at all times regardless of how our relationship changes," she writes.

On May 17, news outlets report that Miller — who is candid in his music and interviews about his struggles with addiction — has been arrested and charged with a DUI after crashing his car into a power pole. Later, when a tweet from a fan seems to blame the breakup for Miller's relapse, Grande fires back. "I am not a babysitter or a mother and no woman should feel that they need to be," she writes. "I have cared for him and tried to support his sobriety & prayed for his balance for years (and always will of course) but shaming / blaming women for a man's inability to keep his s*** together is a very major problem." 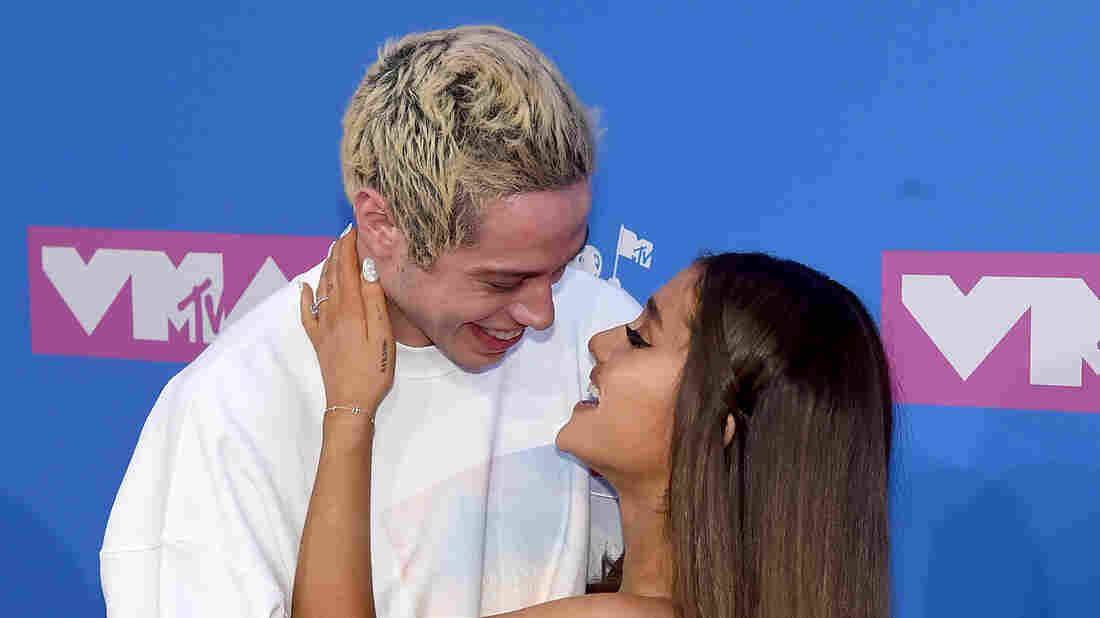 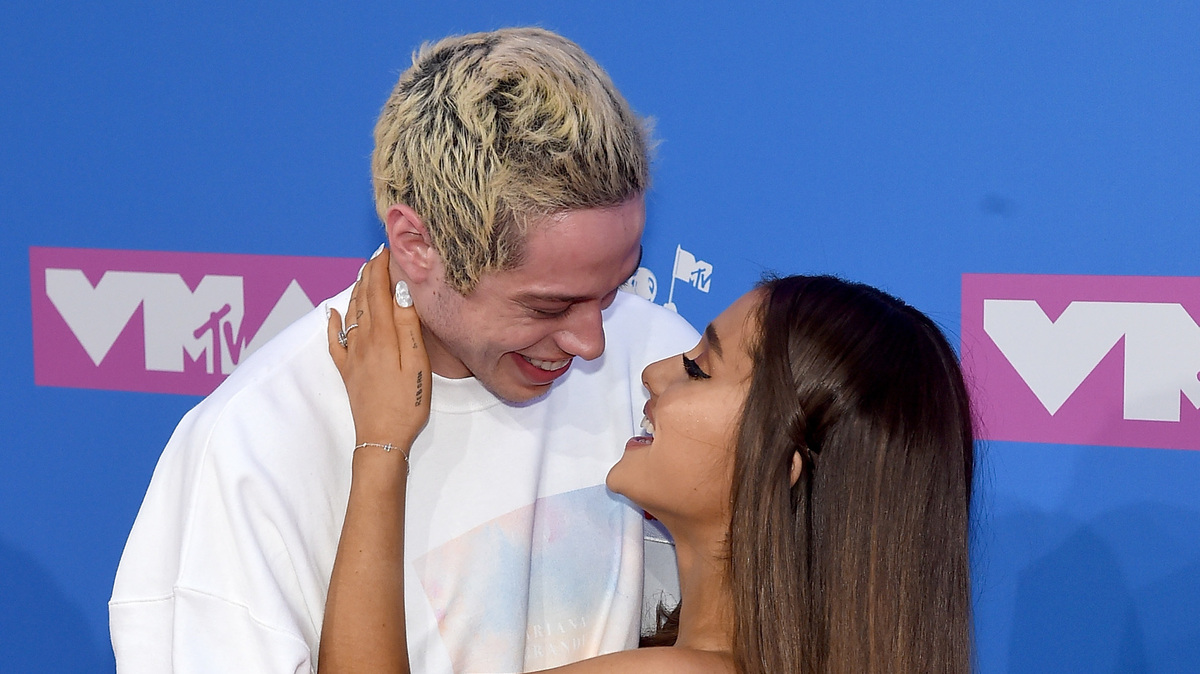 The pop star is first reported by entertainment site Bossip to be linked with Saturday Night Live cast member Pete Davidson, eight days after acknowledging her breakup with Miller. The breakneck pace of their romance and grand, public, sometimes bracing displays of affection become a point of fascination for media outlets. On June 15, the couple announce they are engaged. A month later, Grande releases "God Is a Woman," which Davidson will call his favorite track on her forthcoming album, Sweetener. 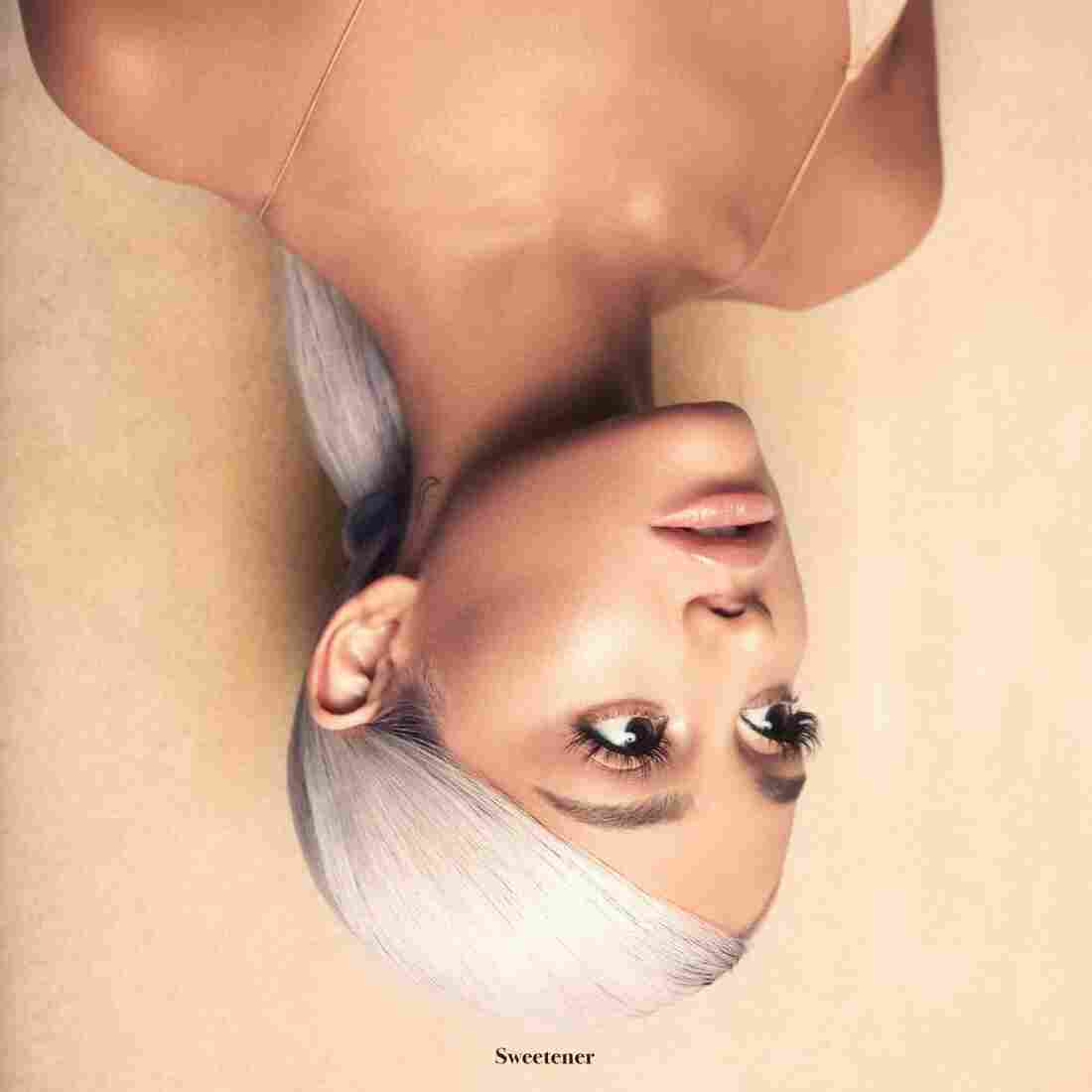 With contributions from Pharrell Williams, Missy Elliott, Max Martin and a stable of pop music heavyweights, Grande's fourth LP scores the equivalent of 231,000 units in its first week — good enough to top the Billboard 200 upon release — and sets fans wondering about the meaning behind the songs. It helps that the album is filled with allusions to her tumultuous public life: A brief interlude is a titular ode to "Pete Davidson"; "Breathin'" and album closer "Get Well Soon" evoke struggles with anxiety and post-traumatic stress following Manchester. (NPR Music will name it the 22nd-best album of 2018.) 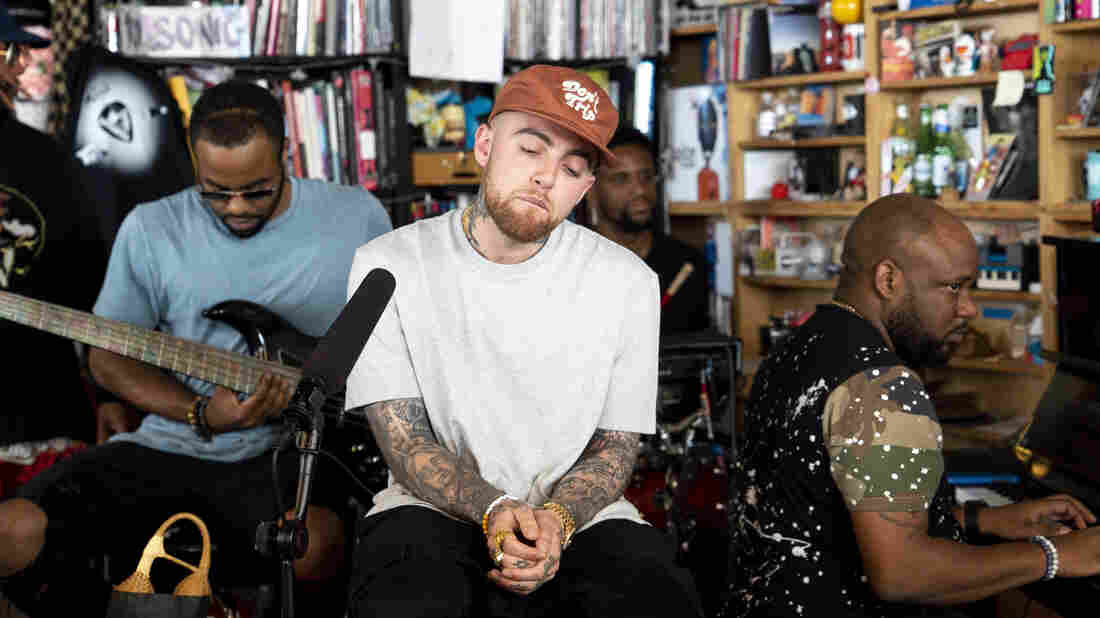 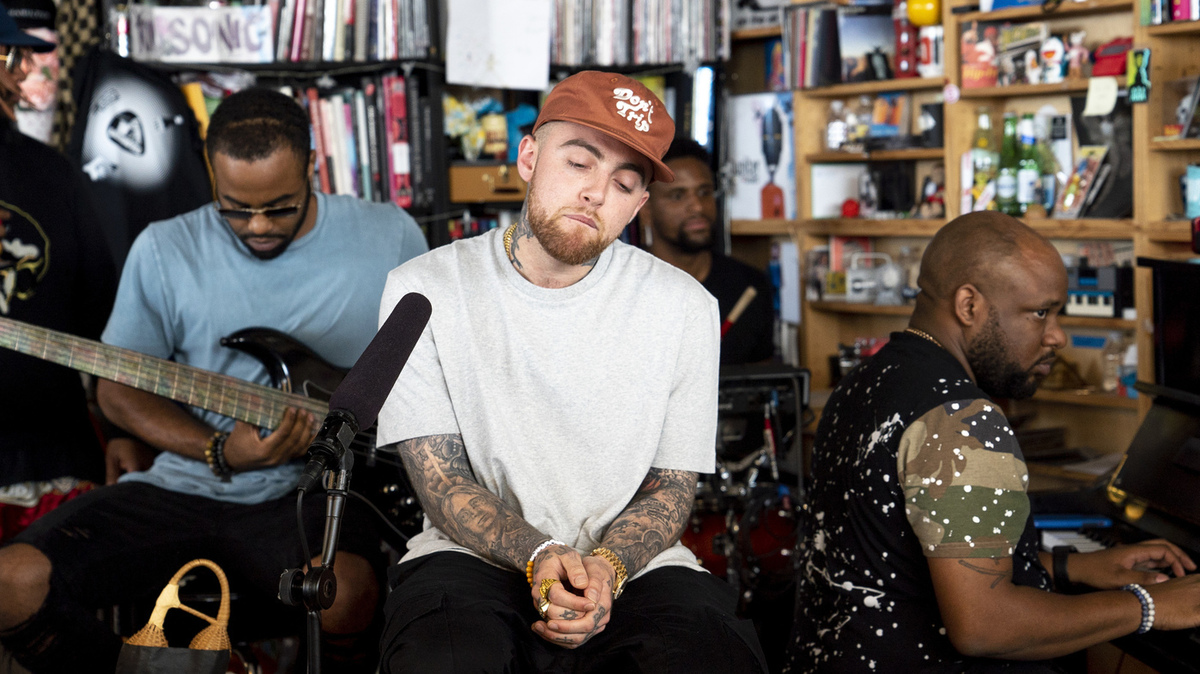 Miller, who had released his own fifth album, Swimming, in August, dies of a drug overdose in his Los Angeles home. "I adored you from the day i met you when i was nineteen and i always will," Grande writes in an emotional public message to Miller a week after his death. "I can't believe you aren't here anymore. i really can't wrap my head around it."

Engagement to Davidson called off

The end of the relationship comes as a surprise even to celebrity watchers, who saw Davidson waxing romantic on Saturday Night Live weeks prior (to mixed response), let alone the couple's purchase of a pet teacup pig (named Piggy Smallz, naturally). Tabloids point to Miller's abrupt death as a factor; others assert Davidson had exploited his newfound fame. Davidson references the separation in a Nov. 1 SNL promo, implicating musical guest Maggie Rogers in the gag. "For somebody who claims to hate relevancy u sure love clinging to it huh," Grande tweets back, then adds three words that will define the next phase of her career.

"thank u, next" single and video released

On Saturday, Nov. 3, shortly before SNL goes to air, the single "thank u, next" is surprise-released. Far from a diss track, it is an earnest recognition of loves lost, thanking Grande's famous exes by name and reflecting on their time together without snark or spite. (For what it's worth, Davidson wishes her the best on that night's "Weekend Update.") The song goes supernova, debuting at No. 1, where it will stay — with one brief interruption by Travis Scott — for seven weeks. Days later, Grande performs the song on Ellen alongside co-writers Victoria Monet and Tayla Parx, re-creating a scene from The First Wives Club in a preview of coming attractions.

On Nov. 30, the success of "thank u, next" is matched with an event-worthy visual. The music video is an homage to beloved early 00's films Legally Blonde, Bring It On, 13 Going on 30 and Mean Girls, and includes cameos form Kris Jenner, Troye Sivan and actors from the original films. Directed by Hannah Lux Davis, "thank u, next" obliterates viewership records on YouTube, nabbing over 55 million views in 24 hours. A week later, Billboard reports that an album by the same name is on the way, just months after Sweetener.

The album's second single drops Jan. 18 and easily debuts at No. 1. Less expected is a churn of controversy: 2 Chainz, Soulja Boy and Princess Nokia all level accusations of plagiarism, some critics allege cultural appropriation, and a hand tattoo Grande shows off in honor of the song is revealed to be misspelled, instead reading as Japanese for a small barbecue grill. (In a course correction of sorts, she enlists 2 Chainz for a remix and attempts to amend her tattoo.)

On Feb. 6, news spreads that Grande has dropped out of a scheduled performance at the 2019 Grammy Awards — set for two days after the album's release — and will not even attend the event. Variety reports the decision followed a dispute with the show's producers over what songs she would perform; a day later, the artist directly accuses executive producer Ken Ehrlich of lying to The Associated Press about the circumstances of her withdrawal. There's no telling if the hiccups have cost her anything in the wider pop market as it prepares for thank u, next — but among Grande's superfans, it's safe to say the mood remains ecstatic.