Accessibility links
Rep. Alexandria Ocasio-Cortez Releases Green New Deal Outline The plan is massively ambitious and faces political blockades. Proponents believe it is what's necessary to start saving the world from the threat of climate change and to reshape the U.S. economy. 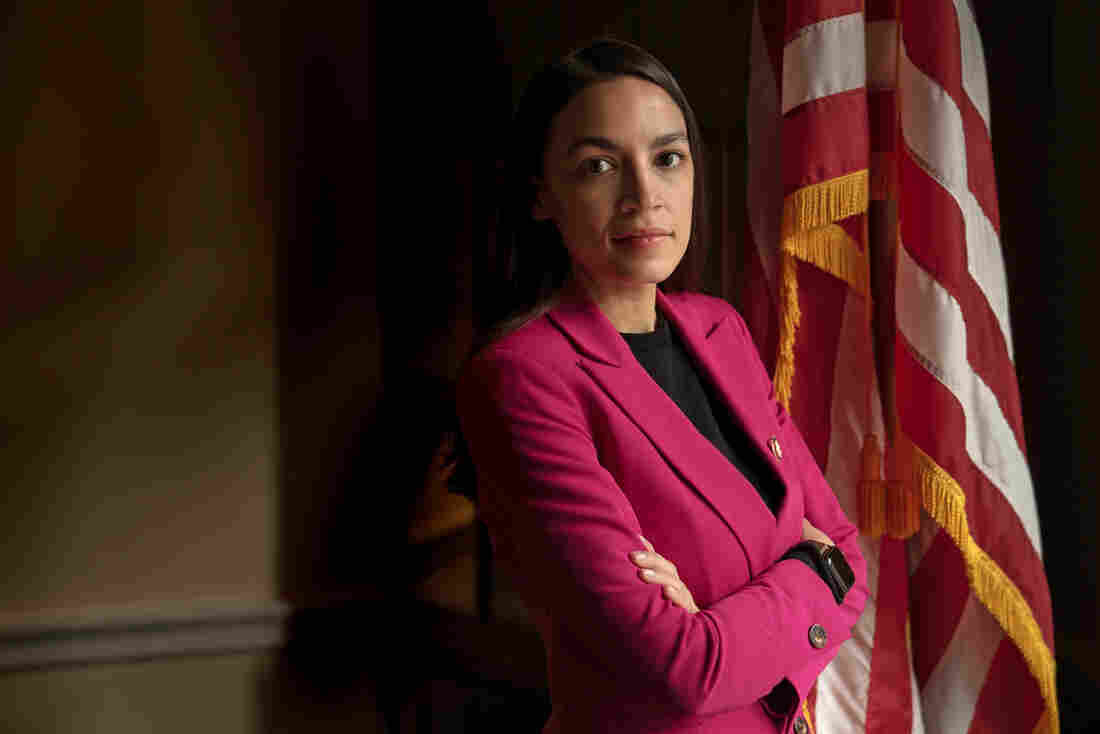 The Green New Deal legislation laid out by Rep. Alexandria Ocasio-Cortez and Sen. Ed Markey sets goals for some drastic measures to cut carbon emissions across the economy. In the process, it aims to create jobs and boost the economy. Amr Alfiky/NPR hide caption 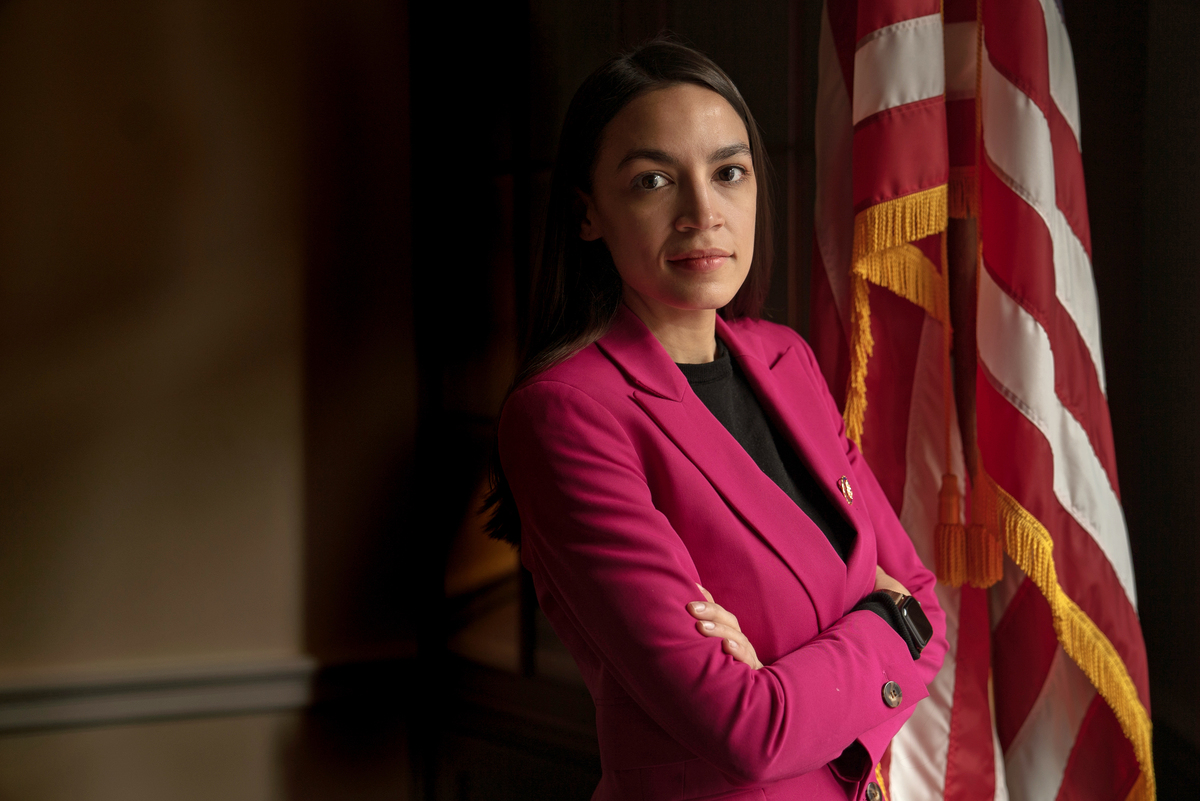 The Green New Deal legislation laid out by Rep. Alexandria Ocasio-Cortez and Sen. Ed Markey sets goals for some drastic measures to cut carbon emissions across the economy. In the process, it aims to create jobs and boost the economy.

Whether it's a deadly cold snap or a hole under an Antarctic glacier or a terrifying new report, there seem to be constant reminders now of the dangers that climate change poses to humanity.

Rep. Alexandria Ocasio-Cortez, D-N.Y., and Sen. Ed Markey, D-Mass., think they have a start to a solution. Thursday they are introducing a framework defining what they call a "Green New Deal" — what they foresee as a massive policy package that would remake the U.S. economy and, they hope, eliminate all U.S. carbon emissions.

"Even the solutions that we have considered big and bold are nowhere near the scale of the actual problem that climate change presents to us," Ocasio-Cortez told NPR's Steve Inskeep in an interview that aired Thursday on Morning Edition.

She added: "It could be part of a larger solution, but no one has actually scoped out what that larger solution would entail. And so that's really what we're trying to accomplish with the Green New Deal."

What is the Green New Deal?

In very broad strokes, the Green New Deal legislation laid out by Ocasio-Cortez and Markey sets goals for some drastic measures to cut carbon emissions across the economy, from electricity generation to transportation to agriculture. In the process, it aims to create jobs and boost the economy.

In that vein, the proposal stresses that it aims to meet its ambitious goals while paying special attention to groups like the poor, disabled and minority communities that might be disproportionately affected by massive economic transitions like those the Green New Deal calls for.

Importantly, it's a nonbinding resolution, meaning that even if it were to pass (more on the challenges to that below), it wouldn't itself create any new programs. Instead, it would potentially affirm the sense of the House that these things should be done in the coming years.

Lawmakers pass nonbinding resolutions for things as simple as congratulating Super Bowl winners, as well as to send political messages — for example, telling the president they disapprove of his trade policies, as the Senate did in summer 2018.

What are the specifics of that framework?

The bill calls for a "10-year national mobilizations" toward accomplishing a series of goals that the resolution lays out.

(Note: Ocasio-Cortez's office released an updated version of the bill on Thursday. The earlier version, which we had included in a prior version of this story, is still available here.)

Among the most prominent, the deal calls for "meeting 100 percent of the power demand in the United States through clean, renewable, and zero-emission energy sources." The ultimate goal is to stop using fossil fuels entirely, Ocasio-Cortez's office told NPR, as well as to transition away from nuclear energy.

In addition, the framework, as described in the legislation as well as a blog post — containing an updated version of "FAQs" provided to NPR by Ocasio-Cortez's office — calls for a variety of other lofty goals:

Report: Global Warming Could Melt At Least A Third Of Himalayan Glaciers

Which is to say: the Green New Deal framework combines big climate-change-related ideas with a wish list of progressive economic proposals that, taken together, would touch nearly every American and overhaul the economy.

Are those ideas doable?

Many in the climate science community, as well as Green New Deal proponents, agree that saving the world from disastrous effects of climate change requires aggressive action.

And some of the Green New Deal's goals are indeed aggressive. For example, Ocasio-Cortez told NPR that "in 10 years, we're trying to go carbon-neutral."

According to Jesse Jenkins, a postdoctoral environmental fellow at Harvard's Kennedy School, that may be an unreachable goal.

"Where we need to be targeting really is a net-zero carbon economy by about 2050, which itself is an enormous challenge and will require reductions in carbon emissions much faster than have been achieved historically," he said. "2030 might be a little bit early to be targeting."

Similarly, removing combustible engines from the roads or expanding high-speed rail to largely eliminate air travel would require nothing short of revolutionizing transportation.

Likewise, some of the more progressive economic policies — universal health care and a job guarantee, for example — while popular among some Democrats, would also be very difficult to implement and transition into.

On top of all that, implementing all of these policies could cost trillions upon trillions of dollars.

Altogether, the Green New Deal is a loose framework. It does not lay out guidance on how to implement these policies.

Rather, the idea is that Ocasio-Cortez and Markey will "begin work immediately on Green New Deal bills to put the nuts and bolts on the plan described in this resolution."

And again, all of this is hypothetical — it would be tough to implement and potentially extremely expensive ... if it passed.

So did the idea of a Green New Deal start with Ocasio-Cortez?

While the Green New Deal has in the last year or so grown central to progressive Democrats' policy conversations, the idea of a Green New Deal itself is well over a decade old. Environmentalists were talking about it as far back as 2003, when the term popped up in a San Francisco Chronicle article about an environmentalist conference.

It gained traction with a 2007 New York Times column from Thomas Friedman, where he used the phrase to describe the scope of energy investments he thought would be necessary to slow climate change on a large scale.

The phrase was also used around President Barack Obama's 2009 stimulus, which had around $90 billion worth of environmental initiatives.

While the idea gained some currency in Europe and also in the Green Party, it wasn't until after the 2016 election that it really gained broad popularity on the left in the U.S. (Vox's Dave Roberts has a more thorough history here).

This latest iteration is different both in the political energy that it has amassed and the grand scope it is taking. While it was a product of the progressive activist community, Ocasio-Cortez has been perhaps the most visible proponent of the plan and has helped it gain nationwide attention.

So will it pass?

Yes, there's some energy for it on the left — some House Democrats have already said they will support the bill. However, there are indications House leadership isn't prioritizing the idea as much as those more liberal Democrats would like — Speaker Nancy Pelosi frustrated Green New Deal proponents by not giving them the kind of committee they wanted to put the policies together.

After the deal's Thursday release, she also cast the plan as simply one of any number of environmental proposals the House might consider.

"It will be one of several or maybe many suggestions that we receive," Pelosi told Politico. "The green dream or whatever they call it, nobody knows what it is, but they're for it right?"

In addition, it's easy to see how the bill could be dangerous for moderate House Democrats, many of whom come from swing districts and may be loath to touch such a progressive proposal.

Among Republicans — even those worried about climate change — the package, with its liberal economic ideas, will also likely be a nonstarter.

"Someone's going to have to prove to me how that can be accomplished because it looks to me like for the foreseeable future we're gonna be using a substantial amount of fossil fuels," said Rep. Francis Rooney, R-Fla., co-chair of the bipartisan Climate Solutions Caucus, speaking to NPR before the Green New Deal's text was released.

For his part, Rooney is in favor of a carbon tax, a policy he helped propose with a bipartisan group of lawmakers in November. Information from Ocasio-Cortez's office says that the Green New Deal could include a carbon tax, but that it would be "a tiny part" of the total package of policies.

Meanwhile, there's little chance of a Green New Deal getting a vote in the Republican-controlled Senate.

If it's not going to pass and it's not even binding, why is it worth even talking about?

It's worth talking about because it already is a politically powerful idea among Democrats.

Already, presidential candidates are being asked whether they support the idea of a Green New Deal, meaning it's easy to see the issue becoming a litmus test for some voters in both the 2020 congressional elections and the presidential election.

To more liberal Democrats, the prospect of such an ambitious economic and environmental package at the center of the 2020 campaign may be particularly energizing.

"I think it's like a really weird instinct that the Democratic Party develops to not be exciting intentionally," said Sean McElwee, co-founder of the progressive think tank Data for Progress. "Most of politics is getting people excited enough to show up and vote for you. And I think that a Green New Deal and Medicare-for-all — these are ideas that are big enough to get people excited and show up to vote for you."

For her part, Ocasio-Cortez says that a policy like the Green New Deal could get voters excited enough to pressure their Congress members to support it.

"I do think that when there's a wide spectrum of debate on an issue, that is where the public plays a role. That is where the public needs to call their member of Congress and say, 'This is something that I care about,' " she told NPR, adding, "Where I do have trust is in my colleagues' capacity to change and evolve and be adaptable and listen to their constituents."

That said, it's easy to see how a Green New Deal litmus test could backfire on that front, endangering some Democrats — particularly in swing districts.

But it's not just about national politics. The national-level energy for a Green New Deal could boost efforts in cities and states. New York Gov. Andrew Cuomo, for example, has been pushing a Green New Deal in his state.

Aside from the politics, there's the fact that climate change remains an impending threat — one for which the world has yet to come up with a fix.

"It's a big legislation because it's a huge [expletive] problem! We're all going to die," said McElwee. "Every week it seems like the risks of climate change become more real, and the amount of devastation it is going to wreak upon humanity becomes larger, and that means we have to do bigger things."