Accessibility links
Despite Few Details And Much Doubt, The Green New Deal Generates Enthusiasm The proposal to address climate change is short on specifics and wildly ambitious. Seasoned energy experts doubt it can work, but give it credit for energizing young activists. 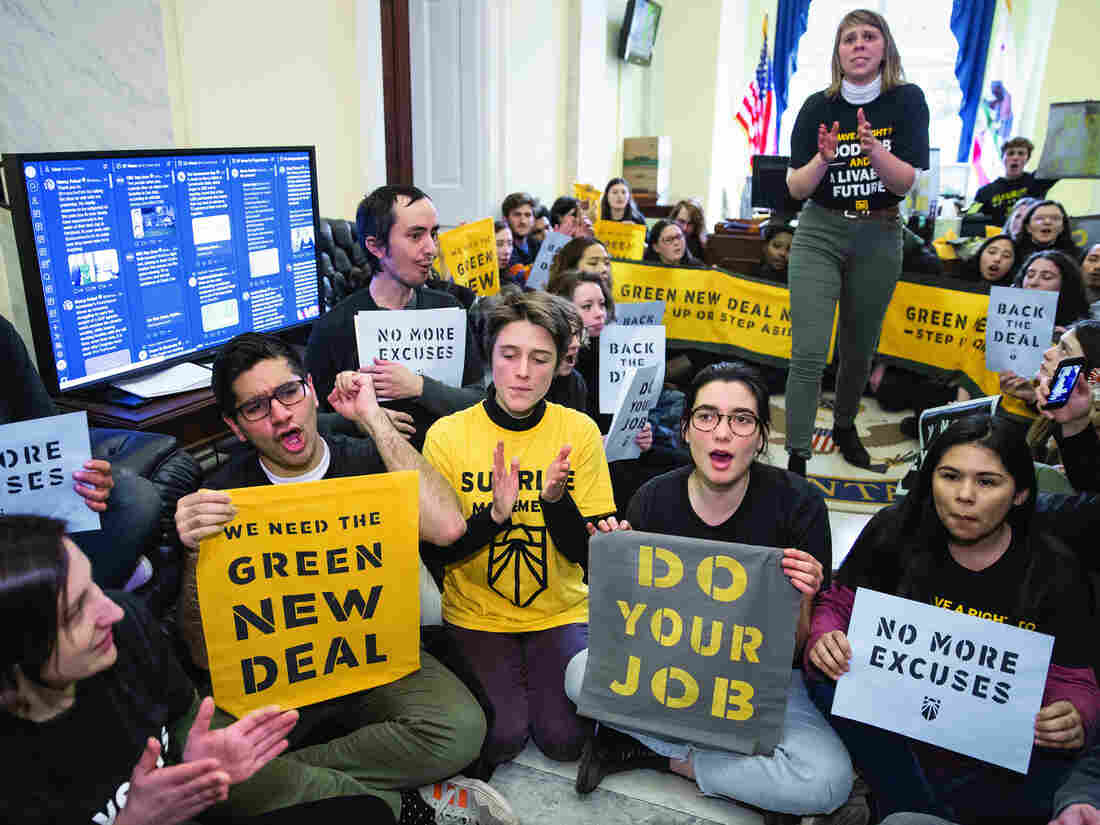 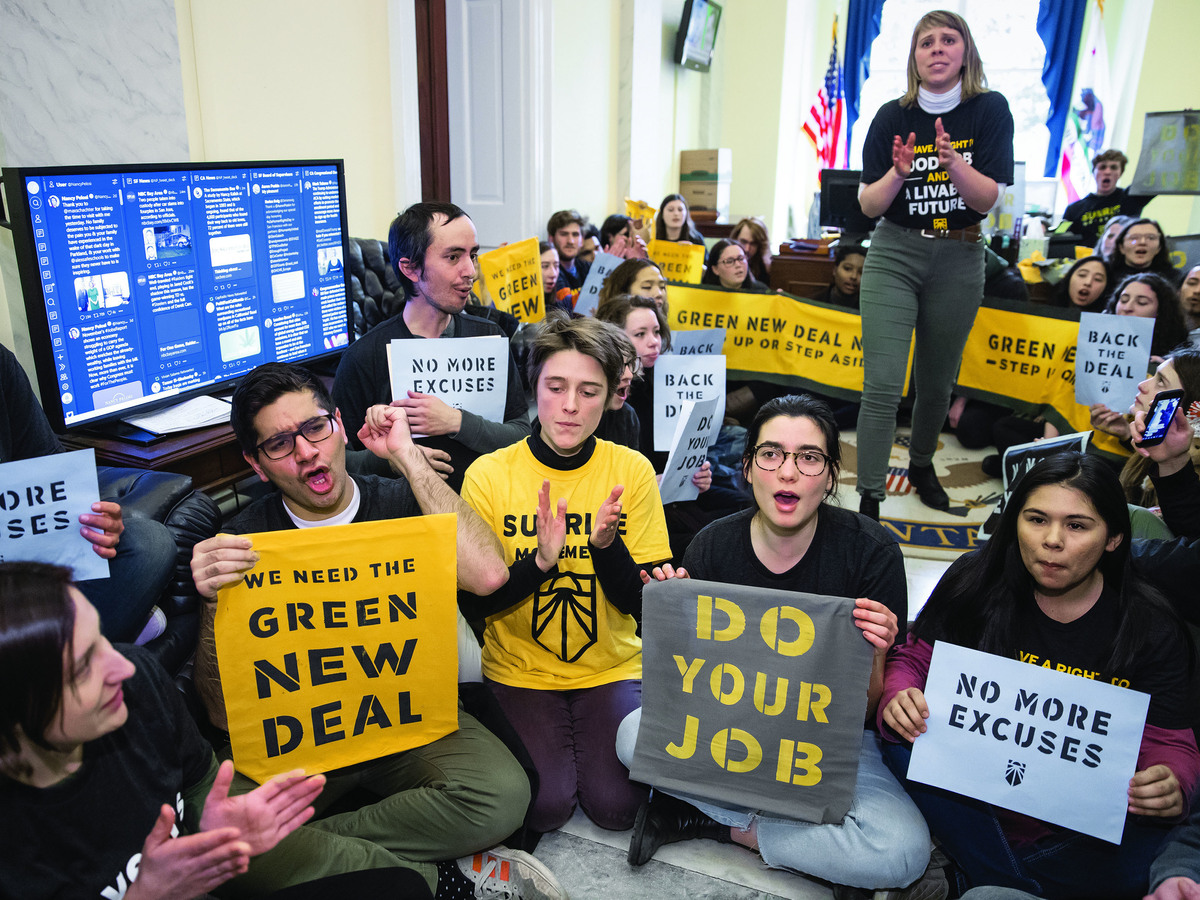 Environmental activists occupy the office of House Democratic Leader Nancy Pelosi this past December. They plan more sit-ins to push for support of a sweeping resolution to address climate change.

For a nonbinding resolution with an uncertain future, the Green New Deal is getting a lot of attention, along with a decidedly mixed reaction.

Dozens of Democrats on Thursday introduced the measure, an ambitious framework for future legislation designed to eliminate the U.S. carbon footprint by 2030.

"Our energy future will not be found in the dark of a mine but in the light of the sun," said Sen. Ed Markey, D-Mass., as he announced the legislation on Capitol Hill.

The resolution has few details, but it aims to overhaul the U.S. economy and spread wealth more evenly. It calls for a speedy shift in energy generation, from fossil fuels to renewable sources like wind and solar, and for "a fair and just transition for all communities and workers."

Much of the early criticism revolves around the scope of the plan, which backers say is big to match the challenge of the climate change problem.

"All great American programs, everything from The Great Society to The New Deal, started with a vision for our future," said co-sponsor Rep. Alexandria Ocasio-Cortez, D-N.Y.

But this vision is for an extremely near-term future.

Moniz, now CEO of Energy Futures Initiative, agrees that the U.S. needs to "pick up the pace" of its shift away from carbon, but he calls the decade-long time frame "impractical." He worries it could turn off key constituencies needed in the climate effort, including labor unions, oil companies and the business community.

I'm afraid I just cannot see how we could possibly go to zero carbon in a 10-year time frame.

The Green New Deal doesn't even mention some of the usual ideas for addressing climate change, such as a carbon tax or cap-and-trade program. Instead, it calls for lots of spending to create, among other things, infrastructure and transport that don't rely on fossil fuels.

"It is a breath of fresh air to see leaders in Congress discussing climate solutions that rise to the scale of the challenge," said Aliya Haq, federal policy director for the Climate & Clean Energy Program at the Natural Resources Defense Council in a statement.

But some groups were disappointed the plan doesn't call for a complete end to using fossil fuels.

"We have 12 years, according to science, if we're going to meet the challenge of the climate crisis. And to do that we have to tackle fossil fuels head-on. And the resolution just doesn't quite get us there," says Nicole Ghio, senior fossil fuel program manager at Friends of the Earth.

"They need to do a whole lot more homework"

These days, transportation accounts for the largest share of greenhouse gas emissions. Green New Deal backers say they want more high-speed trains to make airline travel less necessary, and more electric cars and charging stations. But experts warn that changing the existing fleet of cars in the U.S. would be an extraordinary effort.

"There's 350 million liquid fuel cars on the road today in the United States and most Americans don't buy a new car except every decade," says Amy Myers Jaffe, director of the program on Energy Security and Climate Change at the Council on Foreign Relations.

Green New Deal backers say they also want to eventually phase out nuclear energy, which currently supplies 20 percent of electricity in the U.S. The Nuclear Energy Institute argues in a statement that its electricity is carbon-free and should be a part of any program addressing climate change.

The proposal takes aim at methane from cows, too. Methane is an especially potent greenhouse gas, and cows produce a lot of it. But the beef industry is at a loss to respond because of the lack of details in the Green New Deal.

"They need to do a whole lot more homework and much more research and analysis before we can ever even really engage in this discussion," says Colin Woodall, senior vice president of government affairs for the National Cattlemen's Beef Association.

So far the plan's biggest success may be that it's energizing thousands of young activists.

A group called the Sunrise Movement held a Web meeting with supporters around the country Tuesday. Jeremy Ornstein, 18, says he deferred going to college to work with the organization.

Ornstein is among the Sunrise Movement organizers who plan three weeks of activism, including lobbying members of Congress to sign onto the Green New Deal.

"And we're going to give our elected officials a deadline. They've got to get an answer to us by Feb. 26 or face the consequences," warns Ornstein. He says activists around the country will occupy members' offices in what the group calls a "nationwide day of action."

Given the scope and ambitious nature of the Green New Deal, it might be tempting to criticize or dismiss activists supporting it. But Amy Myers Jaffe hopes older, more experienced policymakers won't do that.

"We need not to discourage them," she says. "They have an energy and will to innovation that is not only infectious, but inspiring."

And she says that could be what's needed to address a problem as daunting as climate change.