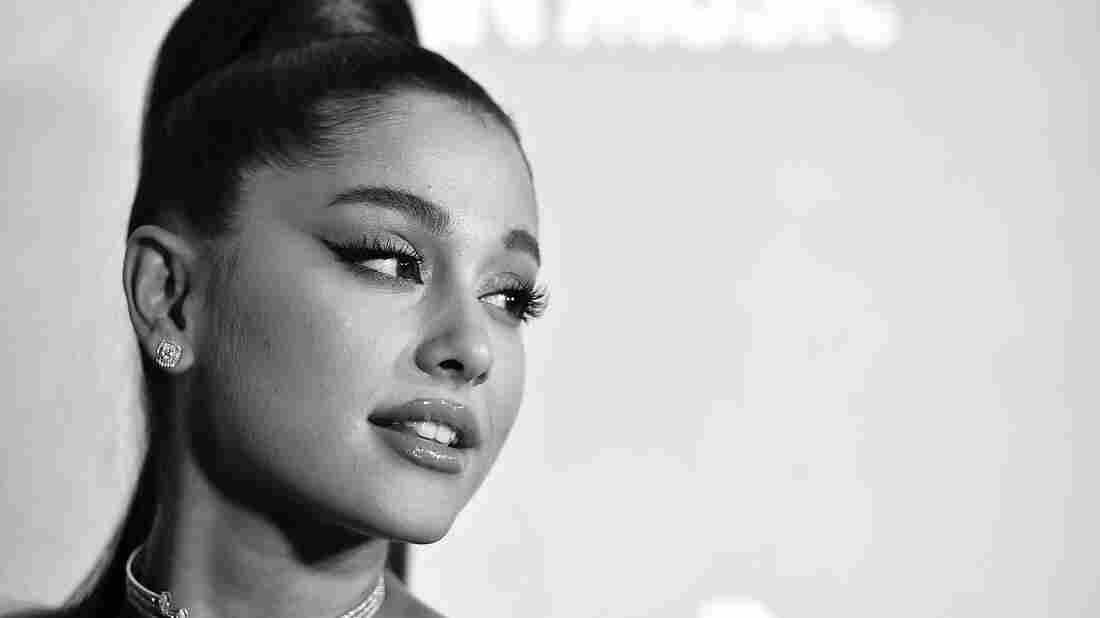 Ariana Grande's fifth studio album thank u, next marks a turning point for the young star. Some of her closest collaborators explain why. Theo Wargo/Getty Images hide caption 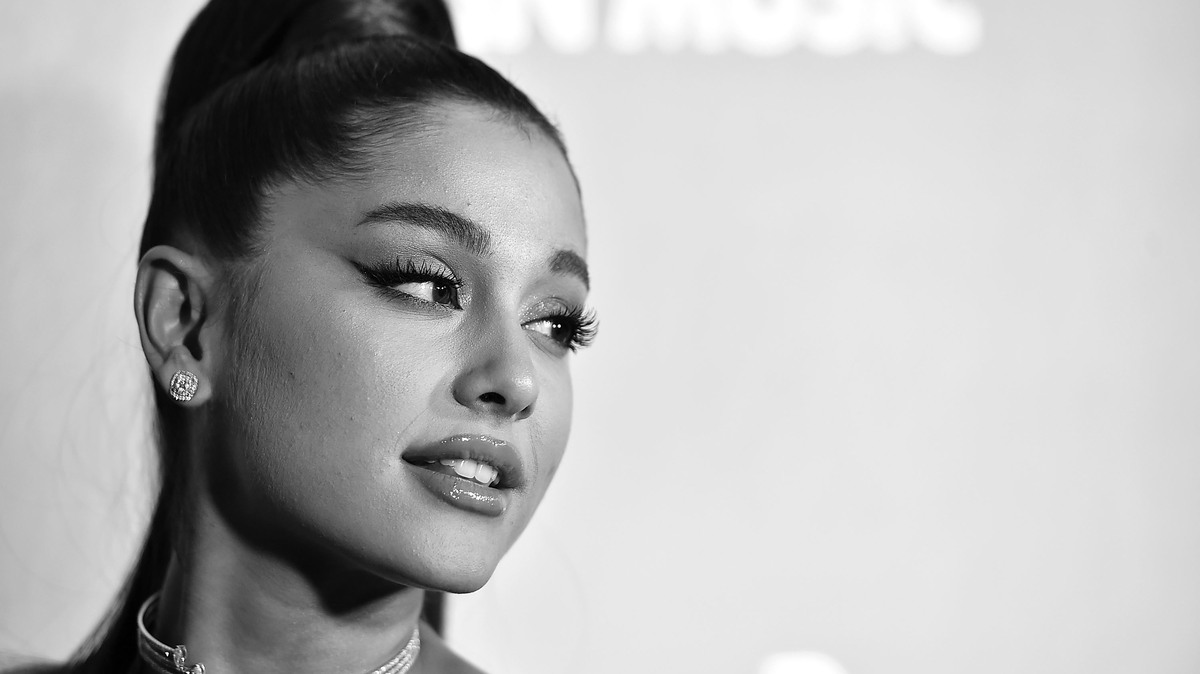 Ariana Grande's fifth studio album thank u, next marks a turning point for the young star. Some of her closest collaborators explain why.

Ariana Grande has gone through a lot in the past year and half. From dropping her charting-topping fourth album, sweetener, to dealing with public breakups and deaths, the 25-year-old star has remained open with her fans while processing these highs and lows. And throughout the processing, she never stopped making music.

Knowing painfully well the meaning of love and loss, Grande retreated to her designated places of solace in the second half of 2018: studio booths, the arms of her friends and even some champagne-aided visits to Tiffany & Co. It was in these moments of retreat that Grande channeled grief and confusion into music. Now, in the wake of some chaotic life changes, Grande has released her fifth studio album (and second album in less than a year), thank u, next.

On the 12-track project, Grande wades through a mixed bag of emotions and braces herself for hard-learned truths. "7 rings," the album's second official single, dissects retail therapy as a substitute for actually facing unresolved feelings. "ghostin" addresses mourning the death of ex-boyfriend, Mac Miller while trying to hold on to her relationship with ex-fiancé, Pete Davidson. "fake smile" deals with the balancing act of appearing stable for the sake of others.

Who Is Ariana Grande? 'Thank U, Next' Video Nods To 'Mean Girls' And More

With a diverse collection of tracks, the album is a reflection of not only Grande's state of mind, but also of the people who flocked to support her during her hardships. From its conception to its arrival, a central narrative of thank u, next has been the collaborative spirit that seems to underpin the new music.

The team of creatives who worked on thank u, next — from producers who have worked with Grande throughout her career to the talented group of girlfriends who co-wrote "7 rings" and "thank u, next" — are as vital to the record as the stories being told on it.

Three of Grande's collaborators, producer Tommy Brown, songwriter Justin Tranter and singer-songwriter Njomza, spoke to NPR Music about their experiences working on thank u, next and their respective relationships with Grande, an artist determined to evolve in real time.

The dynamic of the studio sessions:

Tommy Brown: A lot of the songs on the album, like, they're clever, but they are very 'Say what you mean, mean what you say,' you know? So, [Ariana] was very deliberate. She was like, "OK, let's take two weeks and go into a room everyday and create." We recorded all our songs in two weeks.

We had a whiteboard in the room and every time she would have an idea, she would go up and write it on the whiteboard. Ideas just came pouring out of her. I was like, "She's really feeling something."

Njomza: Me and Mac were really close. He was one of my best friends. So [Ariana and I] were just around each other all the time because of him. ... So after Mac passed, she was really hurt. I was really hurt. And I think it kind of brought us together a little bit closer because of what we were going through. We could understand each other. She surrounded herself with people who could understand.

The songs were written really, really fast. From [September to October], it was almost like a song a day. ... Ideas were just getting shouted out and people were just like adding on with other stuff. It's really cool. It was a lot of really amazing, boss, female energy. 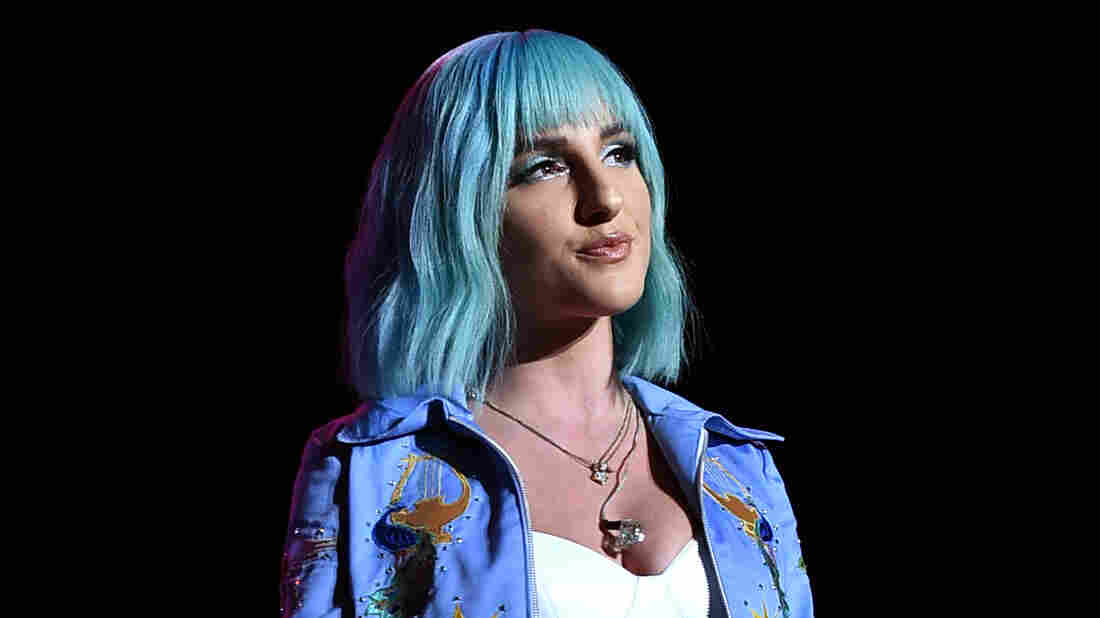 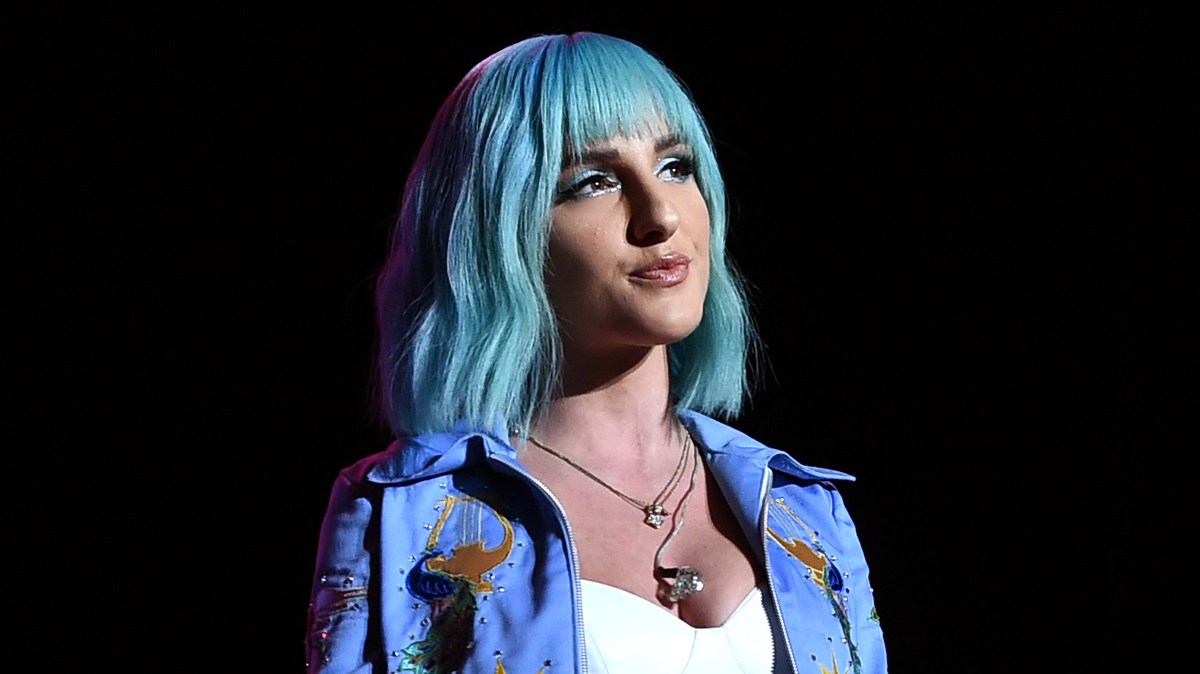 Njomza performs onstage during "Mac Miller: A Celebration Of Life" Concert at The Greek Theatre on Oct. 2018 in Los Angeles.

I loved stepping into her world. I loved hearing her story and turning it into songs, that was honestly my favorite part.

Justin Tranter: It was it's so inspiring to me to see how in charge and how involved she is every step of the way, from the writing to the vision to the storytelling and to even engineering and comping her own vocals.

It was just so cool to see Ariana just being the captain of this ship of all these publicly talented people. You see this young superstar 100 percent leading the way, 100 percent knowing exactly what she wants to say, knowing what she wants it to sound like. When you see any creative person in that element, you know that they're nailing it, you know that they've found their vision and their story and they're executing, it's just such a cool thing to witness. 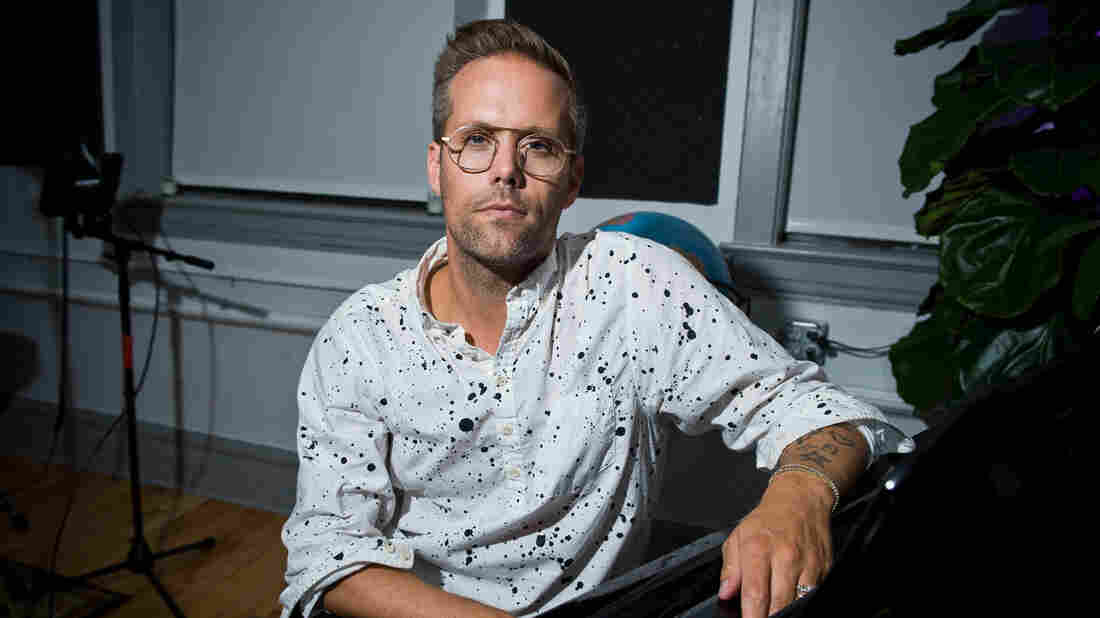 Justin Tranter poses for a portrait at the Justin Tranter Recording Studio ribbon cutting at The Chicago Academy For The Arts in Sept. 2018. Timothy Hiatt/Getty Images hide caption 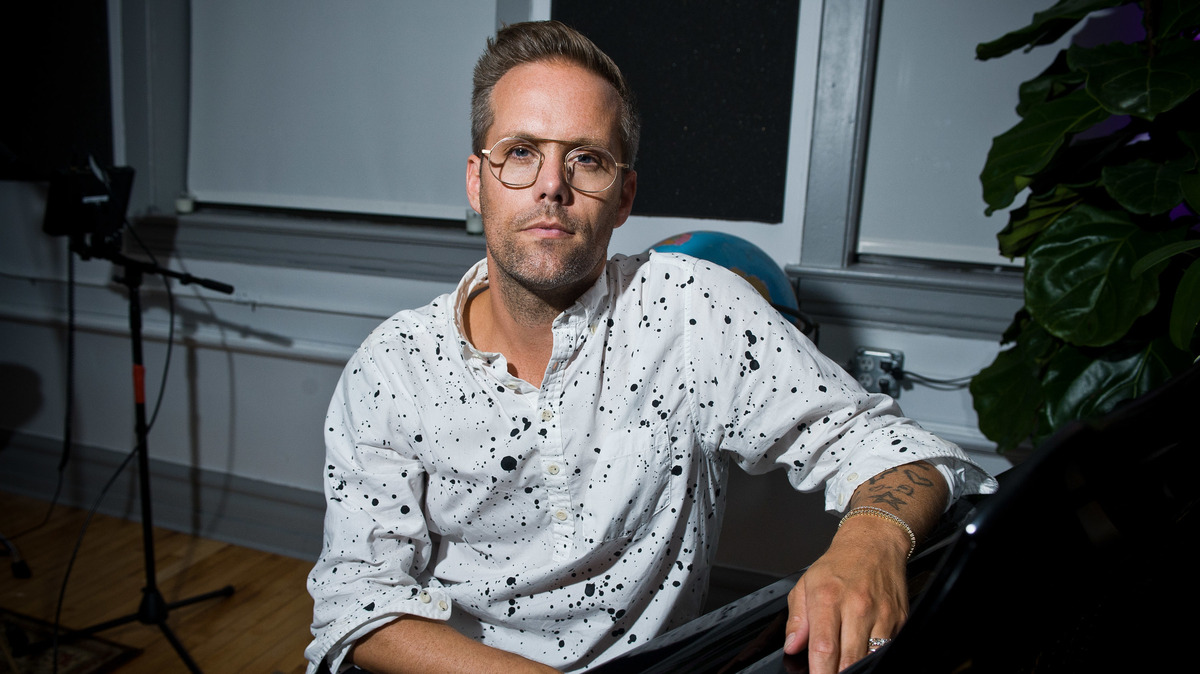 Justin Tranter poses for a portrait at the Justin Tranter Recording Studio ribbon cutting at The Chicago Academy For The Arts in Sept. 2018.

Njomza: One morning, [Ariana] was like, "Do you want to go to Tiffany's? And I was like, "OK, sure." Me, her and her friend Courtney. And we went and they were like literally feeding us champagne, like it was their job to feed us champagne. We got turnt up on accident and then she was like, "You know what? I want to buy everybody a gift for working on the album."

It was a very important time for her. She felt comfortable with all of us.

It was a very important time for her. She felt comfortable with all of us. She wanted to gift everybody, which I thought was like one of the nicest things of all time. Also, one of the craziest things! Just buying, like, seven diamond rings.

I feel like a lot of people wouldn't expect her to come out on a song and own the fact that she's this rich boss, you know, and she rapped on it. Literally, it was such an out of the ordinary kind of record for her.

... and the controversy surrounding it:

Njomza: There's always going to be an issue with something, no matter what the whole situation is. I feel someone's gonna find something wrong with something. And I'm just gonna leave that at that.

The inspiration for "fake smile":

We just kind of started talking about stuff in our lives and the song just kind of fell out. And then once it was done, she immediately cut a vocal because she was so excited about what we had all written together.

It's for sure emotional and for sure honest as f*** and really heartfelt, but at the same time, the track bangs. The sample definitely inspired that heartfelt tone — that '60s kind of heartbreak.

The turning point for Grande:

Brown: It's different than all her other albums because fans can now listen to her story. So much has happened in her life and she's just being open and specific about it. I think other artists are afraid to do that.

So much has happened in her life and she's just being open and specific about it.

Njomza: We were all helping each other. She was going through a lot at that time, so we were all just trying to make each other feel better and realizing how powerful it is to be a woman and we wanted to portray that through all this music.

I don't think people have seen this side of her, you know? And I think it's just her being completely transparent and honest.