Accessibility links
Book Review: 'Enchantée,' By Gita Trelease Gita Trelease's new novel follows a young woman trying to support her family in Paris on the eve of the French Revolution, using trickery and a little real magic to disguise herself as an aristocrat. 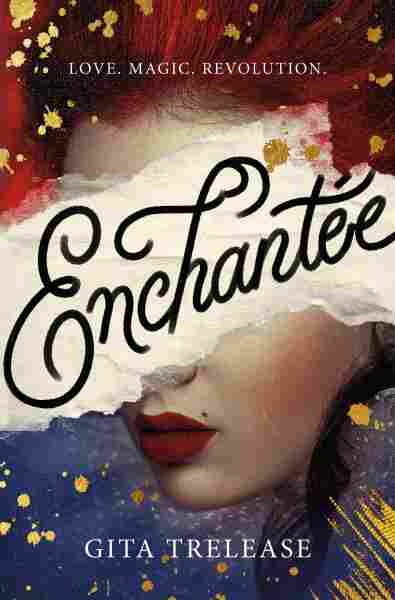 What do I long for in a historical fantasy? Give me the tangled streets of late eighteenth century Paris, the golden halls of Versailles, the rustling of silk skirts, the clang of dueling swords, the snap of a deck of cards being shuffled — all served with a delicious soupçon of magic and a baited breath as la Révolution bears down upon noble and commoner alike.

Camille is resourceful but unlucky. Her mother and father are dead, and she's trying her hardest to provide for her younger sister, Sophie, and their wastrel brother, Alain, by using la magie ordinaire to transform odds and ends into coins that last just long enough to pay for a loaf of bread. She learned la magie from her mother, who was an aristocrat before marrying her printer father, and as far as she knows, it's a talent that runs only in their family.

But magic comes at a cost, making her weak and exhausted, and with Alain's gambling and drinking, there's little hope that Camille will ever be able to provide a better life for herself and Sophie. To make matters worse, Alain's debts have come due, and Camille realizes that in order to escape his spiral of addiction and violence, she must try a new kind of magic.

Her mother left her special tools — enchanted makeup brushes to perform glamoire and change her face, and a sentient dress that draws upon her life force to become whatever disguise she needs. Transformed into a fine lady, she makes her way to the palace of Versailles and begins playing cards with the rich aristocrats she grew up hating for their decadence and cruelty. She has tricks up her enchanted sleeve, and she uses la magie ordinaire to give herself the winning cards that she needs to buy a new life for herself and Sophie.

She didn't count on growing to care for her new aristocratic friends and learning that some of them can also wield magic. Nor did she imagine falling in love with a handsome aeronaut, who flies her over Paris in his balloon and shares her revolutionary ideals. As the spheres of her life begin to collide, all of her secrets are at risk, and herein lies the emotional heft of Enchantée.

At the start, Camille looks at Alain with disgust as he stumbles in drunk, threatening to ruin his sisters with his gambling debts. He is an addict, and she hates him for it. But as the story unwinds and Camille reaches her initial goal of providing financial safety for herself and Sophie, she finds herself setting ever higher goals — and she keeps gambling and doing magic even as it sickens her. She's become an addict herself, and her actions are every bit as dangerous as Alain's. As a reader, I was quick to judge Alain, but in having empathy for Camille, I found myself compelled to deepen my understanding. It's rare for a magical, historical romp of a book to take on an issue this deep, and it does so with subtlety and compassion.

So often, historical fantasy feels the need to rewrite the entire world around magic ... 'Enchantée' paints its sorceries with a delicate hand.

Another way that Enchantée shows its grace is in its use of magic. So often, historical fantasy feels the need to rewrite the entire world around magic. It becomes a litany of societies and rules and objects, often overwhelming the story itself. Enchantée paints its sorceries with a delicate hand. At first, we see only the small, very specific and limited powers that Camille wields at great cost to herself. Then, as we learn more about the role that magic has played in this version of France, we understand the secrecy, the restraint, and the tragedy of it. It is a matter of survival.

All of this may sound rather grim, but Enchantée also knows how to have fun. The frequent descriptions of French desserts had me running to the bakery, and the gowns Camille wears to swan about Versailles are the silky stuff of dreams. The romance is also on-point: Camille's aeronaut, Lazare, is a perfect dreamboat — a reluctant aristocrat with a scientific mind and a penchant for showing off Paris from the sky. His half-Indian heritage has rendered him a sympathetic outsider, and his kindness and open adoration of Camille make him a true romantic hero — even though Camille is capable of saving herself, in the end.

Enchantée is a soaring success. I can think of no more satisfying way to fly across the years and enjoy a gilded view of Paris as it never was but could have been, with a little magic.