Accessibility links
Book Review: 'A People's Future Of The United States' This new collection of speculative fiction stories imagines the lives of marginalized people in a variety of difficult future Americas. It's not an easy read, but it has depths of resilience and hope. 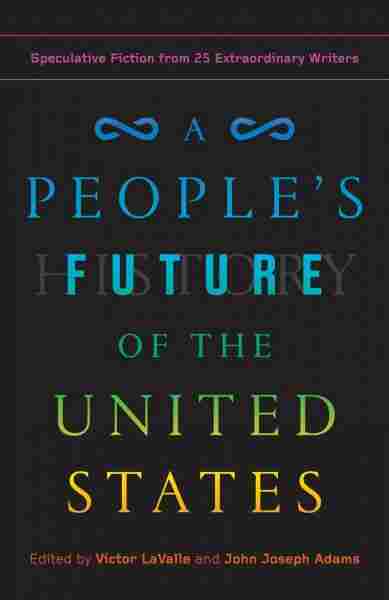 A People's Future of the United States

This collection of 25 stories from speculative fiction's sharpest voices presents visions of future Americas that are born, bloody and aching, from the peril and difficulty of this present moment.

In his introduction, editor Victor LaValle writes about how this book derives from the project of its namesake, Howard Zinn's A People's History of the United States — the story of this place, as told by its people, all of its people. Indigenous and immigrant, female and queer and poor, rural and urban; a history spoken by the voiceless. This collection is full of futures which belong to the same people Zinn centered.

They are, in majority, not comfortable or easy futures — nor would one expect them to be, derived as they are from the second year of the Trump presidency and its pervasive damage to the marginalized of the United States. Several of these stories are brutal in their plausible despair — but all of them are rich with an undercurrent of, if not resistance, then the profound resilience of human beings, particularly those who have too often been denied rights and voices. As a whole, the collection challenges the ideas of who the people of the future United States might be — and therefore also challenges assumptions about who the people of the United States are now.

While not every story here is equally strong, the best of them all have small acts of defiance and connections between the marginalized at their hearts. Of particular note is Sam Miller's "It Was Saturday Night, I Guess That Makes It All Right," in which a re-closeted gay man in a homophobic, surveillance-culture United States discovers a radical, magical transformative power in orgasm — a power which can both remake the broken and ruined world around him and which seems to be a sexually transmitted disease, spreading like an inverse HIV to pass resistance from one queer person to another, creating a network of rekindled agency rooted in desire across the landscape of post-industrial upstate New York.

Equally powerful is Lizz Huerta's "The Wall," set in Mexico after a militarized, anti-immigrant United States has not only built a border wall but created a method of brainwashing American soldiers to eliminate resistance. The protagonists of this story are the leaders and builders of a new society on the Mexican side of the wall, concerned with water rights, self-sovereignty, and using what forms of indigenous magic they have rediscovered to create a place where even brainwashed border patrol agents might have a chance to become people again.

Information, information technology, and information control feature in most of these futures. This is unsurprising given the current information landscape. The rise of social media and its accompanying privacy concerns, and the accelerating development of corporate-driven surveillance have created deep social tensions and a growing distrust in our systems of understanding truthful and valid communication. For the marginalized, even in this present United States, there is the possibility that allowing governments or corporate entities access to personal information may mean the loss of freedom of expression, freedom of identity, and even loss of life and home. These themes are pressed to their logical limits within the stories in this book.

These futures are not easy. But they show us how we too might find ways to live, and live well, no matter what is coming.

Maria Davana Headley's "Burn After Reading" imagines a cult of librarians who practice living anthropodermy — preserving the censored world of literature and political thought on their own skins while alive, and then on every surface of their bodies after they die. Malka Older's "Chapter Five: Disruption and Continuity (excerpted)" traces a future history of social movements online through the medium of an invented textbook — which turns out not to be a textbook at all, but a thought experiment in the shape of a textbook, written by a protagonist practicing "virtual history," the subject of the textbook they are writing. And A. Merc Rustad's "Our Aim Is Not To Die" is a moving, terrifying, and hopeful exploration of an autistic person in an ableist, surveillance-controlled future America who discovers an artificial intelligence who might be the closest thing they have to a real ally.

A People's Future of the United States is not a simple read, nor a comfortable one. It begins from the premise that our current precarious situation will almost certainly get much worse. But within all of the futures contained here, there remain people, people whose marginalizations, whose existence on the edges of what some ideologies would think of as America, have given them profound depths of resilience. These futures are not easy. But they show us how we too might find ways to live, and live well, no matter what is coming.