Accessibility links
Lindsey Vonn Retires As The Winningest Female Skier In History "I have always pushed the limits of ski racing and it has allowed me to have amazing success but also dramatic crashes," Vonn said, summarizing a storied career.

Lindsey Vonn Retires As The Winningest Female Skier In History

Lindsey Vonn Retires As The Winningest Female Skier In History 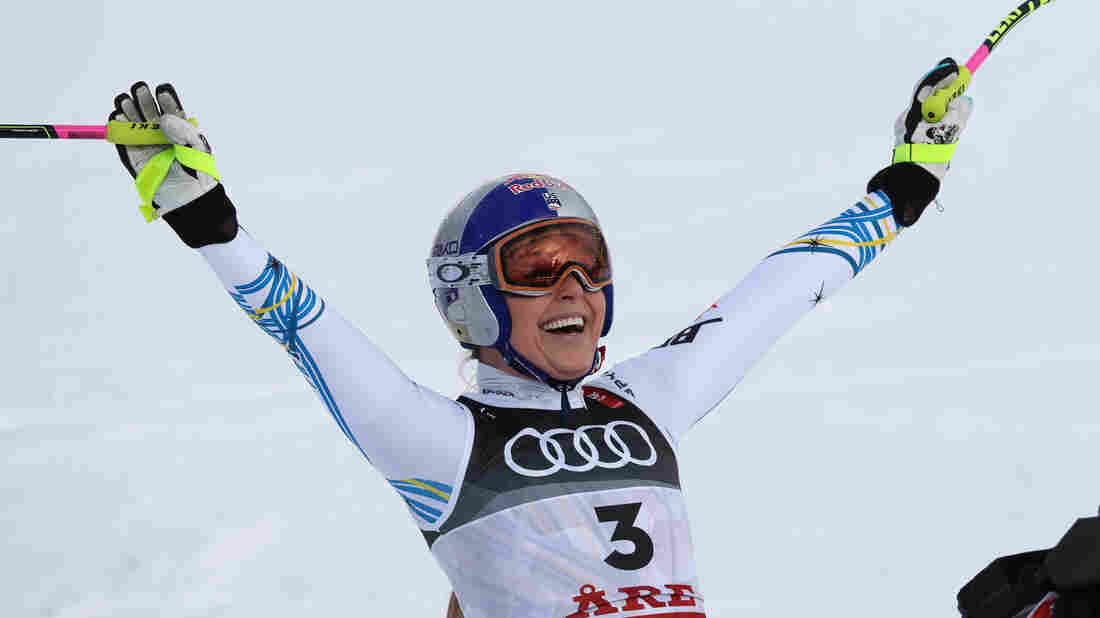 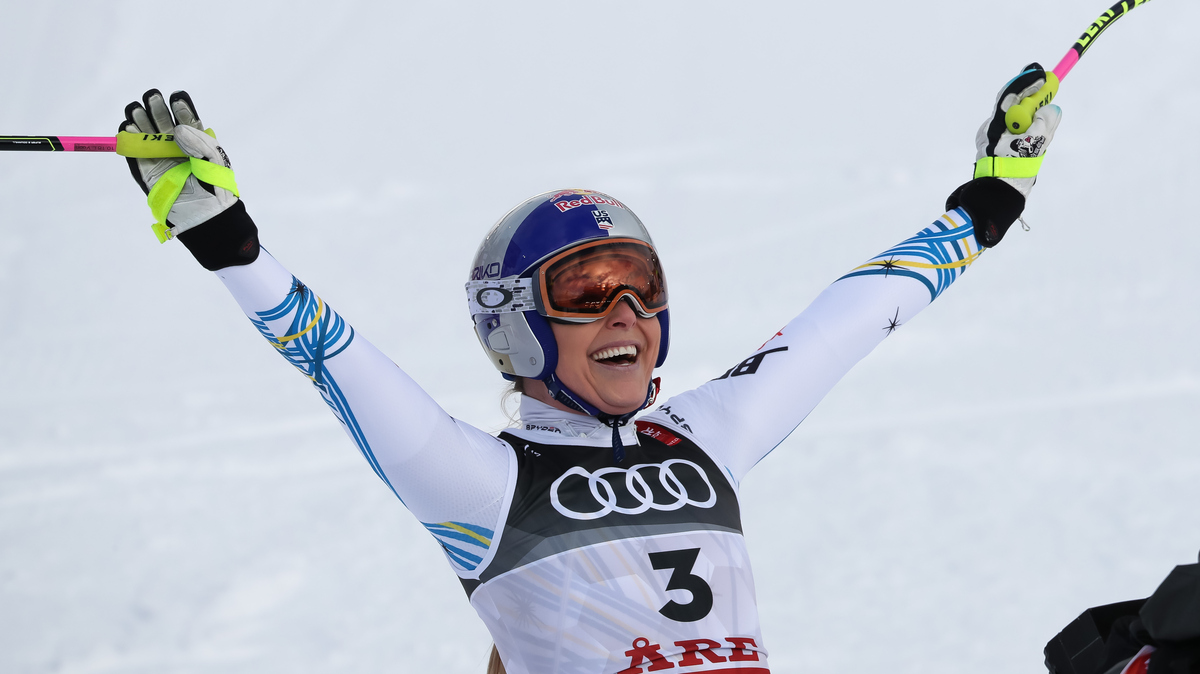 Lindsey Vonn competes during the FIS World Ski Championships Women's Downhill on Sunday in Are, Sweden.

Lindsey Vonn is retiring as the winningest female ski racer in the world and one of the most decorated alpine skiers in U.S. history, ending a career in which she refused to let terrible injuries slow her down. In her final race Sunday, Vonn sped down the mountain to loud cheers, taking bronze in the downhill at the world championships in Are, Sweden.

"I laid it all on the line. That's all I wanted to do today," Vonn said. "I have to admit I was a little bit nervous, probably the most nervous I've ever been in my life. I wanted to finish strong so badly."

Race organizers shortened the course in the morning due to fog and wind, which served Vonn well, as it reduced the pressure on her surgically repaired knees. Vonn recently announced she would retire early due to her injuries. She was originally set to end her career in December.

"After many sleepless nights, I have finally accepted that I cannot continue ski racing," Vonn said last week of her decision to retire.

Vonn, 34, is the first American woman to win an Olympic gold medal in the downhill. Her 82 World Cup victories are the most of any female skier — and she is stepping away from racing just four wins short of the all-time record held by Ingemar Stenmark. Vonn has also won seven World Championship medals, including twin golds in 2009. 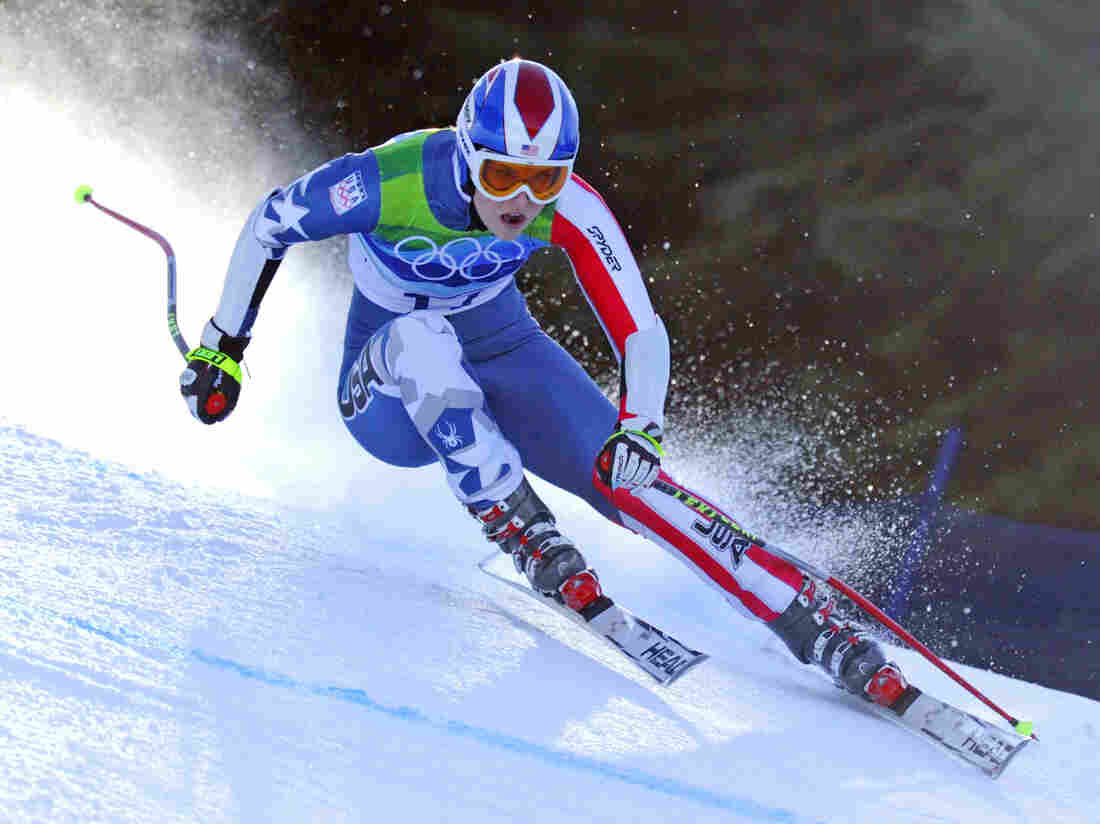 Lindsey Vonn had her most successful Olympics in 2010, when she won gold in the downhill and bronze in the super-G at the Vancouver Games. Alain Grosclaude/Agence Zoom/Getty Images hide caption 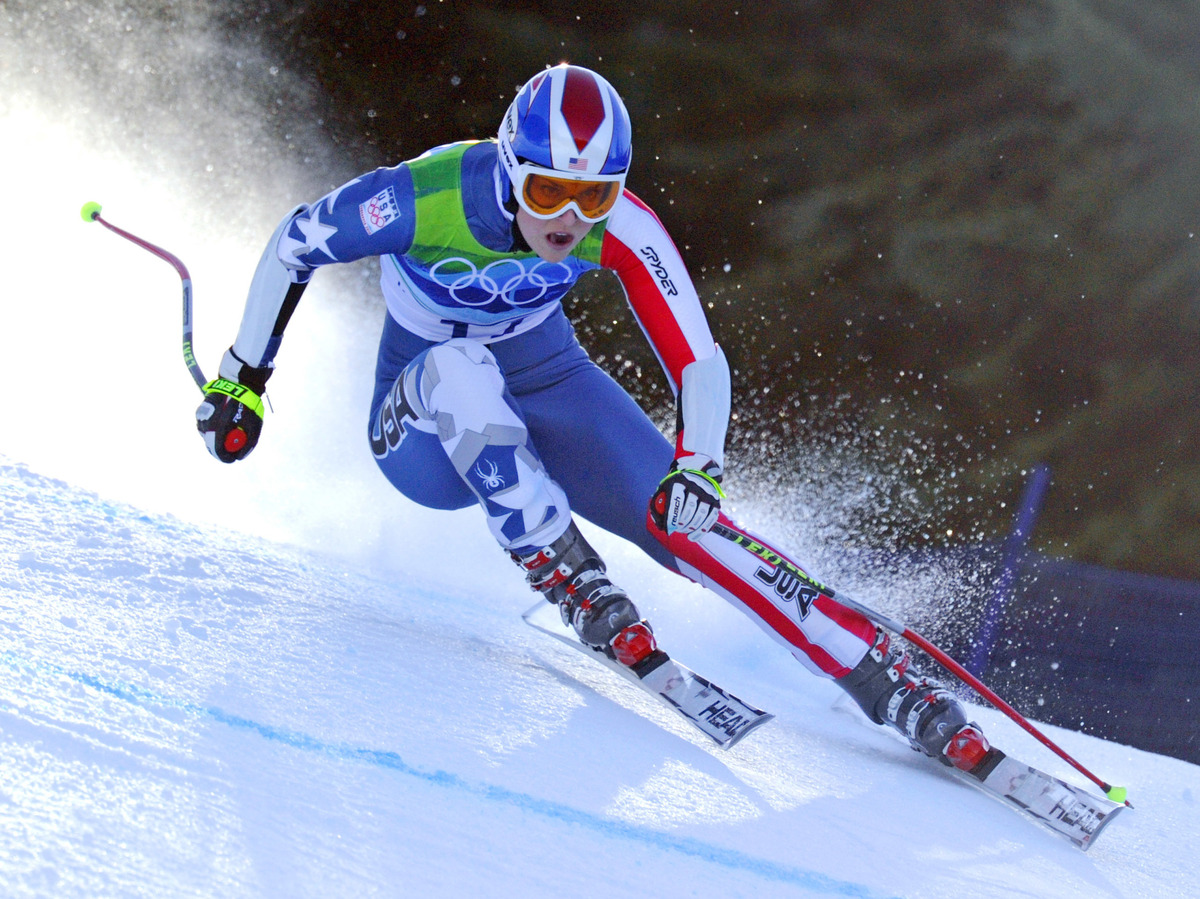 Lindsey Vonn had her most successful Olympics in 2010, when she won gold in the downhill and bronze in the super-G at the Vancouver Games.

"I have always pushed the limits of ski racing and it has allowed me to have amazing success but also dramatic crashes," Vonn said in an Instagram post about her retirement, efficiently summarizing a career marked both by her daring and her resilience in coping with debilitating injury.

Vonn famously recovered from a crash that devastated her knee in 2013, and she has bounced back from broken bones and other injuries over her 18-year career. But she said recent problems with her knees forced her to make this week's FIS Alpine World Ski Championships, in Are, Sweden, her last event.

One year ago, Vonn was winning races and seemed poised to break Stenmark's World Cup record. She won a bronze medal in the downhill at the Pyeongchang Olympics.

In March of 2018, Vonn won a gold medal in the downhill at Are, and took a bronze in the Super-G. The strong showing capped a season that also included wins in Germany, Italy, and France.

Her final alpine racing season has been rough for Vonn, starting in November, when she suffered a heavy and awkward crash during a training run at Copper Mountain, Colo.

At the time, Vonn said she had a bone bruise and a sprained lateral collateral ligament in her knee. But she recently said the injuries were more serious than she had revealed, including a ligament tear and three fractures. Vonn said she withheld that information, and the news that she had surgery last spring, because "I have never wanted the storyline of my career to be about injuries."

But it was the accumulating effects of injuries, she said, that led her to stop racing.

"My body is broken beyond repair and it isn't letting me have the final season I dreamed of," Vonn said before traveling to the world championships in Sweden. "My body is screaming at me to STOP and it's time for me to listen." 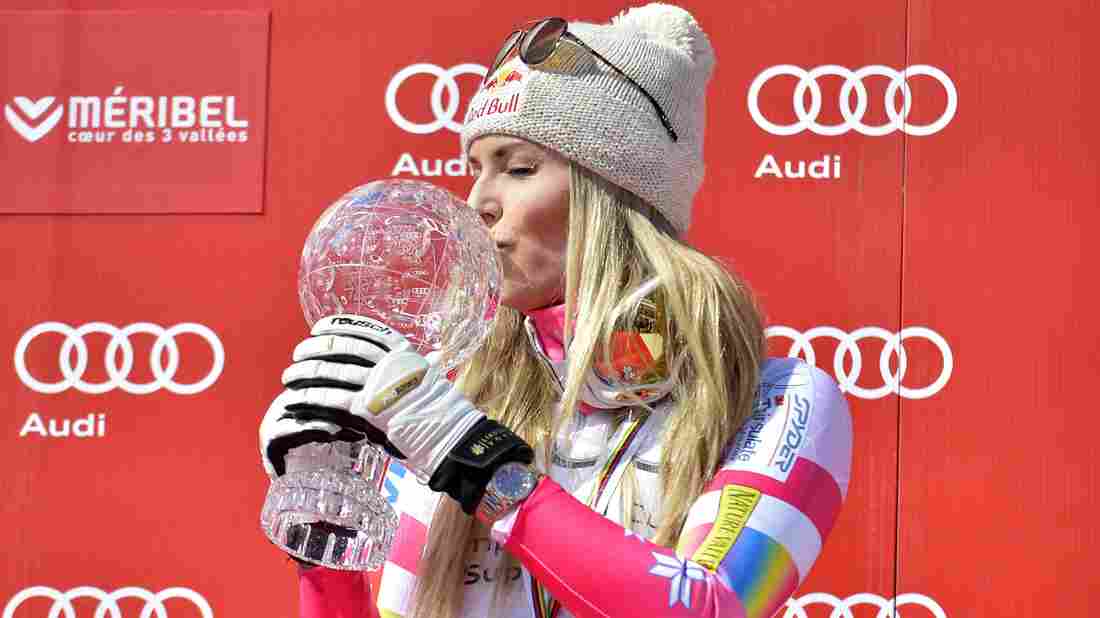 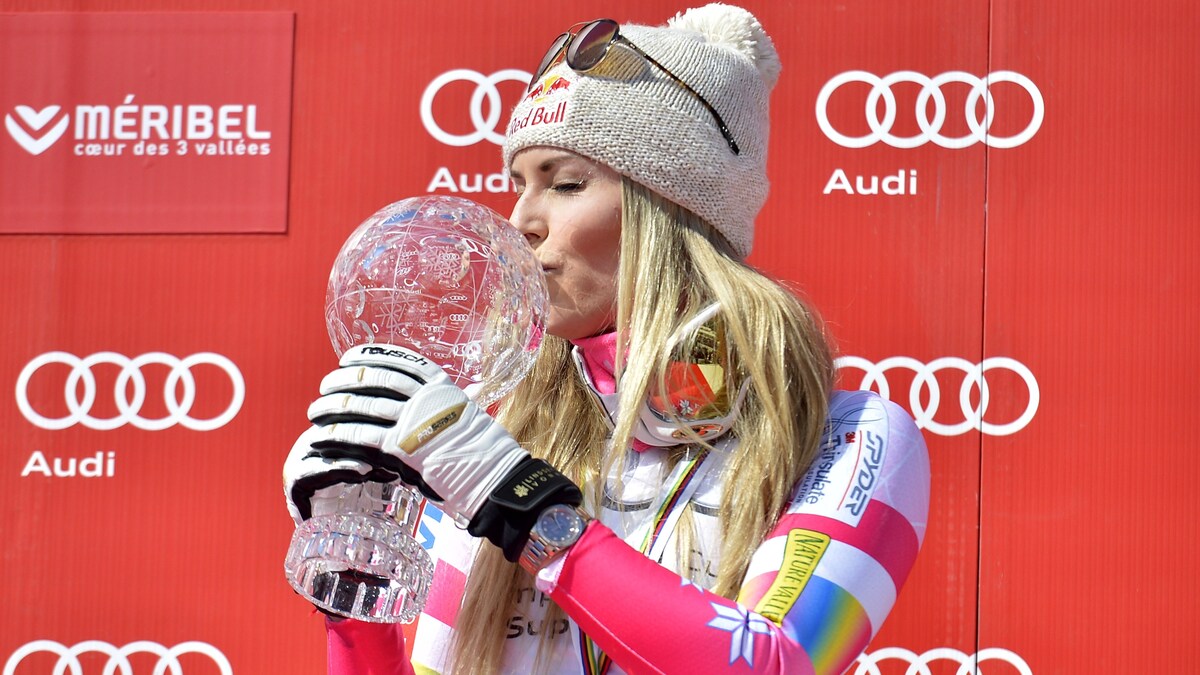 Vonn was a dominant force on the FIS World Cup circuit, where she won four World Cup overall championships. She's seen here kissing the crystal globe trophy after winning a Super-G race in Meribel, France, in 2015.

Days after she announced her decision to retire, Vonn crashed in her final Super-G race, in a dramatic fall that left fans and fellow skiers cringing. Vonn went airborne as she neared a gate, sending her through the center of the panel rather than around it.

With her skis tangled, Vonn sprawled across the snow and into the netting. Seconds before, she had been rushing down the hill at speeds of around 60 mph, drawing roars from the crowd.

A red medical sled was brought to take Vonn down the mountain. But instead of using it, the four-time Olympian stood up, took stock of herself, and clipped back into her skis. After a few minutes, she skied through the rest of the course, waving to acknowledge the crowd.

She later added via Twitter, " If adversity makes you stronger I think I'm the Hulk at this point...."

Vonn, who suffered a black eye and sore ribs from the crash, said the light had shifted on the race course, making it hard for her to judge the terrain through the goggles she was wearing. Up to that point, Vonn's many fans, including rival skiers, had been cheering her on as she tried to carve time out of the course.

"I was charging," Vonn said afterwards. "I wanted to lay it all out on the line."

It was vintage Vonn, and proof that she wasn't content to drift quietly into retirement. In being aggressive at the last world championships of her career, Vonn did what she has always done: pushing herself to be faster and attacking the course. And if she fell, she always got back up.

Vonn, the daughter of Alan and Linda Kildow, took up skiing at age 2. She grew up in the Twin Cities area of Minnesota — allowing her to develop her technical skills at the famous Buck Hill program run by ski-racing guru Erich Sailer in Burnsville. At age 12, Vonn moved to Vail, Colo., allowing her to train on larger mountains. Five years later, she made her Olympics debut in 2002.

Injuries are often blamed for taking away Vonn's chances for more Olympic medals. But she was a dominant force on the world ski circuit, earning widespread respect for her athletic ability and tenacity. Her success, combined with the sense of personality she brought to her sport, helped Vonn win lucrative endorsement deals with brands from Head and Under Armour to Red Bull and Rolex. 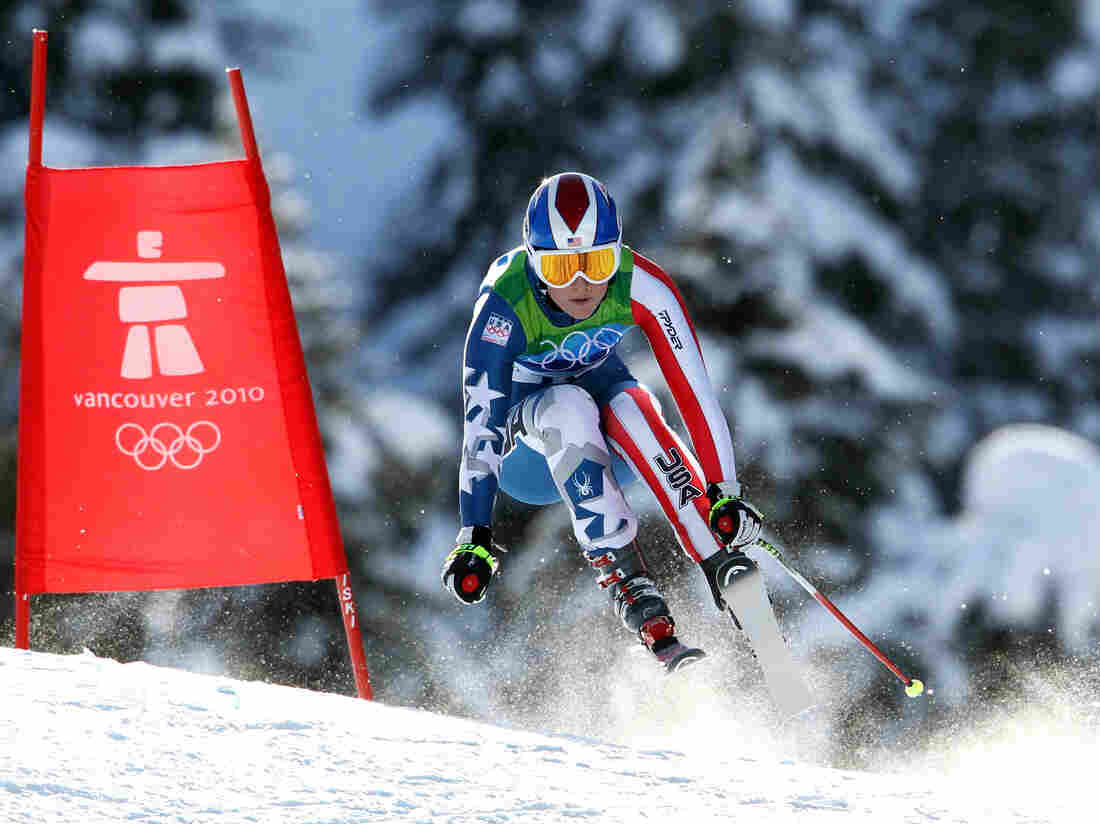 Vonn got her start in skiing at an early age, and bolstered her talents with intensive slalom training under racing guru Erich Sailer's Buck Hill program. She then moved on to dominate speed events, like the downhill. Clive Rose/Getty Images hide caption 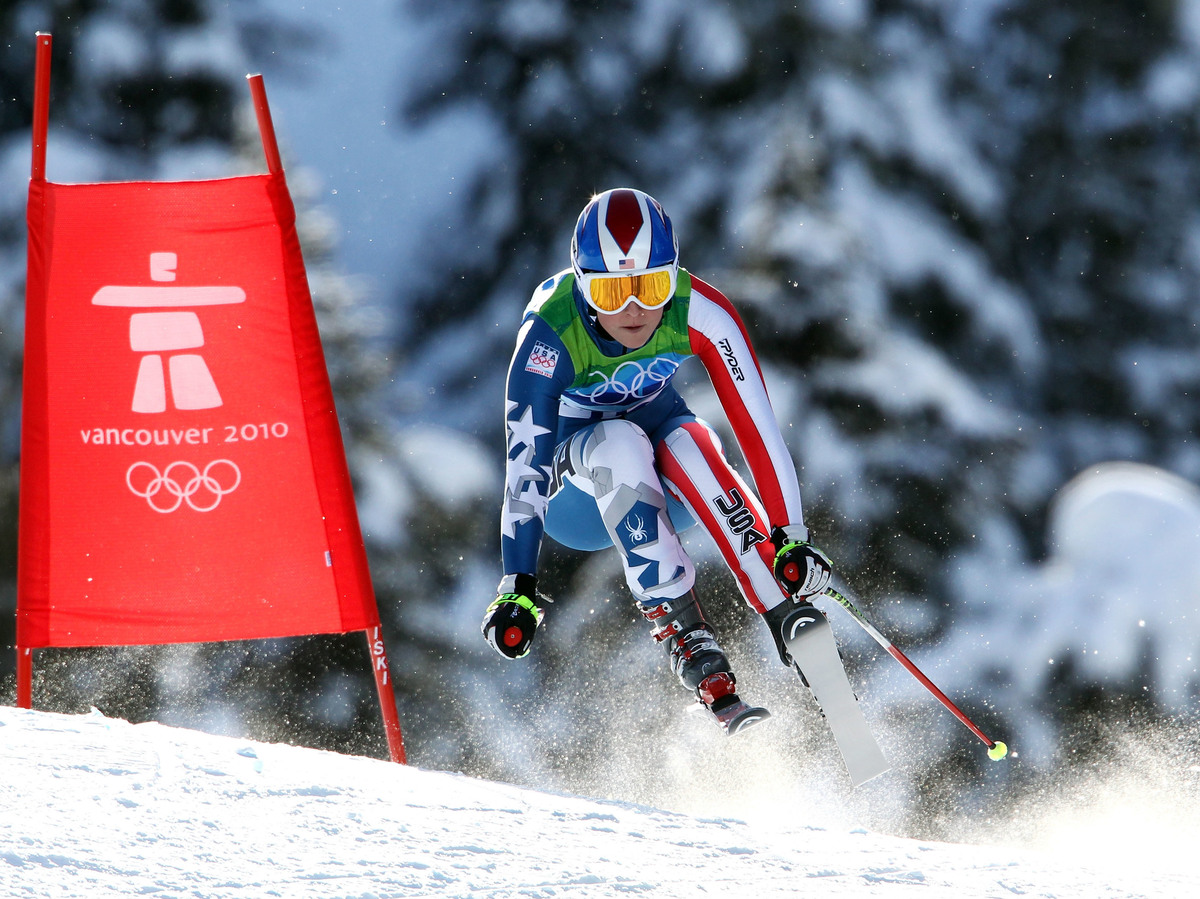 Vonn got her start in skiing at an early age, and bolstered her talents with intensive slalom training under racing guru Erich Sailer's Buck Hill program. She then moved on to dominate speed events, like the downhill.

As she continued to win, Vonn became the face of American skiing. Her image was on magazine covers from Sports Illustrated to Glamour. Her resilience and bravery set an example for younger skiers to follow. And Vonn's celebrity hit a new peak when she and another elite athlete, golfer Tiger Woods, dated for three years. Along the way, she boosted the visibility of alpine skiing and raised expectations for Team USA on the international level.

As Vonn steps away from her sport, her U.S. teammate Mikaela Shiffrin seems ready and able to dominate women's skiing for years to come. Fittingly, it was Shiffrin who won the Super-G race in which Vonn crashed on Tuesday, with the former slalom specialist securing her first world title in that speed discipline. At just 23, Shiffrin has won 56 races on the World Cup circuit — already putting her third on the women's win list.

But on Sunday, it was all about Vonn, as one of the greatest skiers in the world said farewell to the sport that repeatedly broke her body — but whose thrills kept her coming back for more.

"I'll miss that wonderful sensation of speed that you can get only by racing down a hill on a pair of skis," Vonn said at a news conference in Sweden this week. "I don't know yet how I will compensate for that, because I won't be able to do it skiing privately without my ski pass being taken away from me."