Accessibility links
Book Review: 'Tonic And Balm,' By Stephanie Allen Stephanie Allen's novel creates a microcosm of America in 1919 in the form of a travelling medicine show, packed with people from all walks of life, trying to get along in the show's close confines.

'Tonic And Balm' Builds A World In A Bottle

'Tonic And Balm' Builds A World In A Bottle 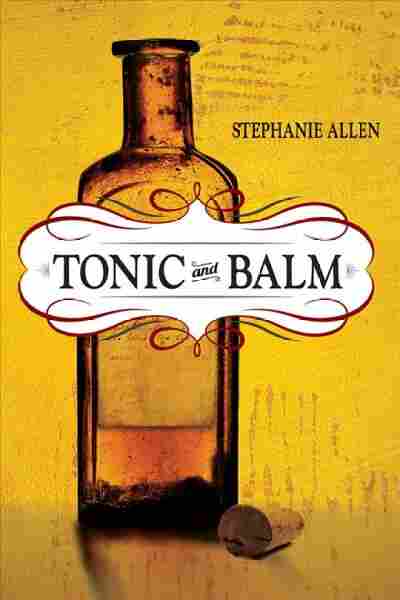 Each chapter of Tonic and Balm takes a single character or small set of characters to construct the Miracle and Mirth Medicine Show. The book opens with a young black boy, Ephraim Travers, jumping off the back of an onion truck to join up. He's captivated by the ragtag group, flimsily held together by Doc Bell himself, "the one whose unseen hand moved the show from this town to that and set his people dancing and singing or made them stop. The one who gave them their dirty boardinghouse rooms."

Stephanie Allen, an NEA fellowship recipient and a Hurston/Wright Legacy Award Finalist, uses this little world to explore larger issues of race, class, and gender. Writing primarily in the present tense, she gives us a set of characters who are odd and often lovable, characters who wrestle with sticky parts of their pasts and try to imagine life beyond Doc Bell's. We meet Matilda and Marie, an interracial couple stalked by Marie's husband; and Oscar Sauer, the supposedly "licensed" physician. We meet Louise "Ma" Fleet, who joined the show after running away from her home in Baltimore:

All that cooking and cleaning and ironing and tending to babies when the whole of Baltimore was out there waiting for me. My folks didn't never get no more than a few blocks away from home, and soon as they got the pork hocks or tarpaper or preaching they wanted, it was right back to those three little rooms they fixed up as nice as they could. Soon as I was fifteen, old enough to hear Lindy's Black and Tan Minstrels when they come to town, I was gone.

And Felix Conger, a lonely Jewish man who serves as the show's fixer. With "his beady black eyes," he has "always been a snake and a snake he always gonna be." Characters like Ma Fleet and Felix Conger can feel stereotyped – but on the other hand, Allen gives us characters who defy stereotypes, such as Matilda and Marie, whose tender love had to have been unusual in the early decades of the Twentieth Century. Once thrown into Doc Bell's mixing bowl, the members of his show must deal with each other — at times with compassion, at times with frustration or resignation.

Knitting the book together is Miss Antoinette, the show's Sheba, Queen of the Nile. Antoinette's "tremendous head, swollen from hydrocephaly, sways slightly above her shoulders. A turban covers it without hiding its fantastic proportions." Like a mirror, she provides a reflection for the people around her to see themselves — friends, performers, and gawking onlookers. Dr. Oscar Sauer, whose job is to take care of her and assess her fitness to appear in the show, senses her power: "It amazes him, what she doesn't know. And what she does." The real miracle is that she is alive; over time Sauer "forgot just how unlikely her survival was."

Entropy is at the heart of Tonic and Balm. More than constructing the show, the book deconstructs it, as if designed to shed characters at the same pace that Haydn's Farewell Symphony requires musicians to leave the stage. It's a tricky premise, but in general, it works. Allen establishes the pattern at the outset: Ephraim arrives, works for the show (albeit for no pay), and is then abandoned by Miss Antoinette. He is forced to make his way back to his very proper older sister in Albany, NY, who carries "white banners hand-lettered in red with messages saying things like UPHOLD LIBERTY FOR ALL and STOP THE CRIME OF LYNCHING." Marie tries hiding, but ultimately forsakes Matilda to return to the husband who's come to reclaim her. Other characters, like Felix Conger — who trained early in life to be a violinist — leave to reconnect with their pasts. "Ah Felix, how could this be?" he asks himself. "Did you forget what the music is for?"

In the last chapter, Miss Antoinette lands in the care of Matilda, who now owns a dress shop. Matilda thinks wistfully back on her times with Marie, acknowledging that her "traveling days are over," and remembers Marie saying that "Miss Antoinette had sides to her didn't nobody know about." So Matilda teaches Miss Antoinette to sew, and "between orders, she started to sew the strangest things out of scraps, shapes you never did see or even think of before, and who knew what to do with them?" Miss Antoinette's quilts are a metaphor for the story stitched around her. The characters may disappear one-by-one from Dr. Bell's, but Miss Antoinette's strong, mysterious presence holds their reflections.