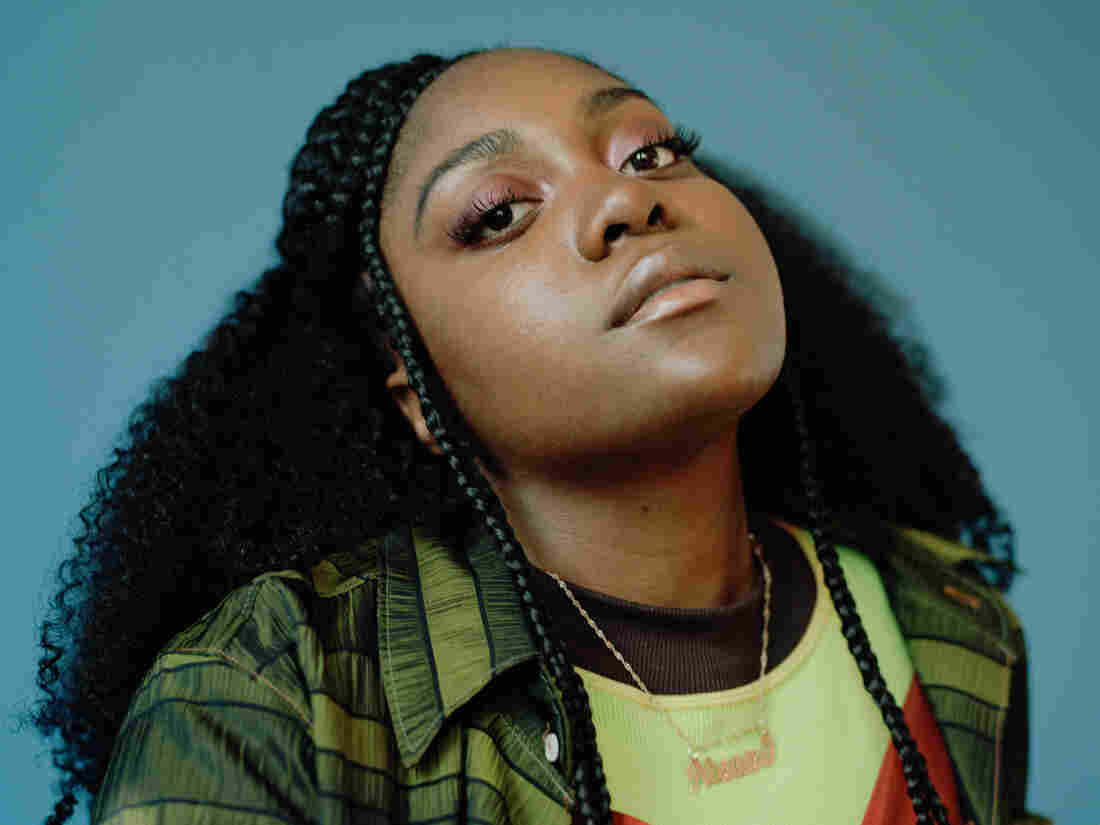 Noted for its sharp commentary on race, identity, sex and politics, Noname's album, Room 25, was one of the most critically-acclaimed records of last year. Chantal Anderson/Courtesy of the artist hide caption 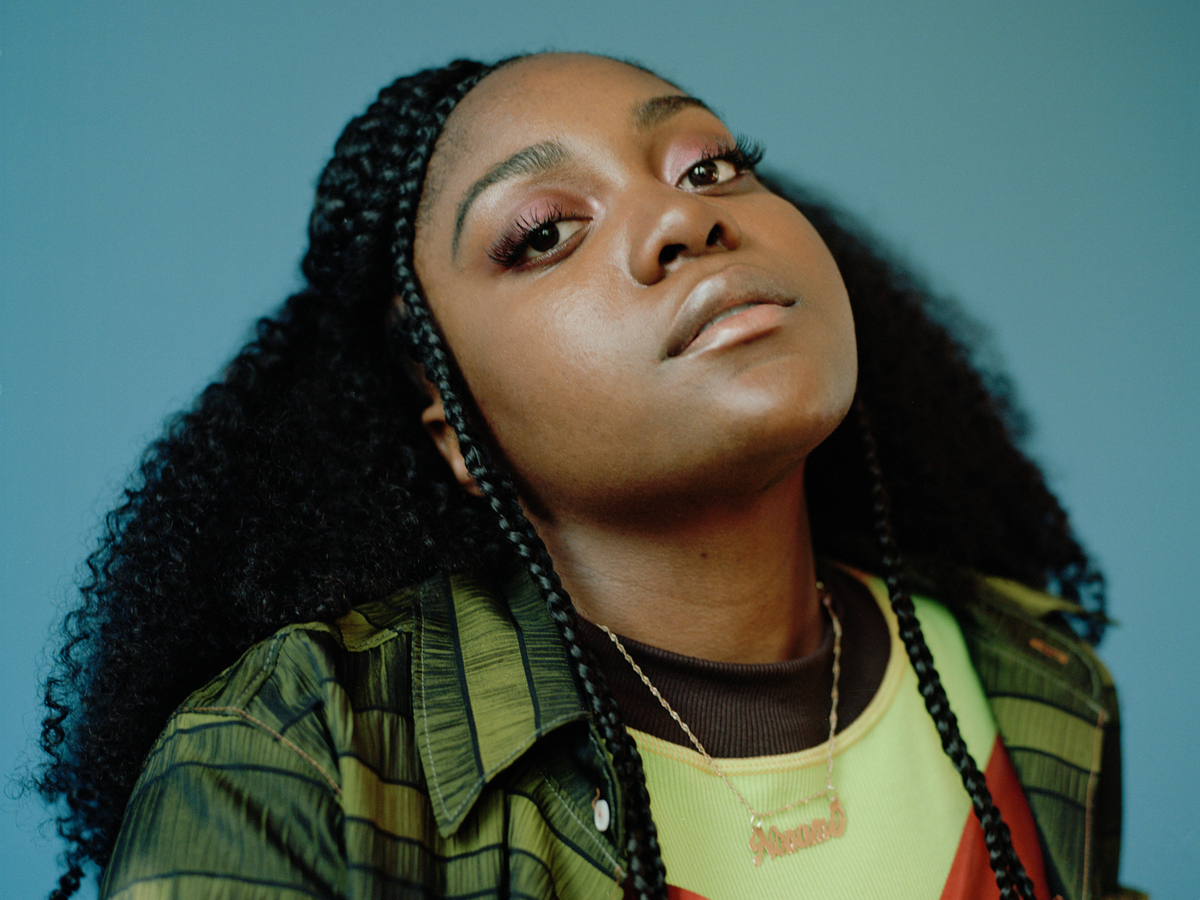 Noted for its sharp commentary on race, identity, sex and politics, Noname's album, Room 25, was one of the most critically-acclaimed records of last year.

Chantal Anderson/Courtesy of the artist

Despite what her social media handle suggests, Noname isn't hiding anymore. The soft-spoken but quick-witted rapper has spent years bubbling in Chicago's hip-hop scene and sparring on tracks with friends like Saba and Chance The Rapper while still maintaining a low profile.

"It kind of became this very corny way for me to view my identity as this nomadic, weird, avant-garde person who is off the grid, who can be anything and nothing all at once," she says when describing the origin of her stage name.

Born Fatimah Warner in Chicago, Ill., Noname first gained attention when she appeared on Chance The Rapper's 2013 mixtape, Acid Rap. Following that success, she released the 2016 mixtape, Telefone, and used the proceeds from that record to fund her debut studio album, 2018's Room 25. Noted for its sharp commentary on race, identity, sex and politics, Room 25 was one of the most critically-acclaimed records of last year.

Thanks in large part to Room 25, Noname's sense of aloof anonymity has slowly melted away to reveal conscious rap star power. But she'll be the first to tell you that doesn't mean she's got it all figured out.

Noname spoke with NPR's Michel Martin about the messages of Room 25, her preference to stay independent as an artist, the state of women in rap and more. Hear the radio version of their conversation at the audio link, and read on for more that didn't make the broadcast.

Michel Martin: You're from Chicago. I understand you started as a poet.Why don't you tell me a little bit more about the transition to rap, like how did it present itself to you. How did that happen?

But doing poetry, and in Chicago, I was able to go to a lot of different open mics and meet a lot of other musicians and other people who who are artistic and express through different mediums. So I met Chance [The Rapper] and Mick [Jenkins], and a lot of other people ended up influencing me and helping me grow artistically and expand outside of just poetry.

I know that artists, especially you, hate to be labeled, that you hate the categories, but how would you describe yourself?

I'm struggling to simmer down, maybe I'm an insomni-black / Bad sleep triggered by bad government / Write a think piece in the rap song, the new age covenant / If you really think I'm cooking crack, pass me the oven mitts.

Tell me anything about this. How does how does this come to you?

A lot of the times, I don't really know. I kind of just get inspired by the production. So Phoelix had most of the instruments laid down for the track but the bassline was just so funky that I kind of envisioned like what would Penny Proud be if it were like a political cartoon, you know? Like, what would that look like. I guess I tried to be that character on the song. So, a lot of it is supposed to be visual. Like a lot of the writing is supposed to be purposefully visual, kind of cartoony.

Sometimes you have to play it a couple of times sometimes to really hear it. Even for me because I write my style of writing is very stream of conscious. So it's hard sometimes to explain my work because it's not really linear to anything ... It's like a sarcastic way of looking at it where it's dark but it's also got this levity to it because it's written from the standpoint of a cartoon.

And you mentioned that it feels very visual. This song is also the first song that you've made a video for. And I was curious why you chose this one. Describe the video for people who haven't had a chance to see it.

So the video is basically kind of like in the style of Godzilla. But instead of there being this huge obscene creature terrorizing a town, it's this little baby and he's going around and he's destroying the city. But it's showing like a take on how I think white America sometimes views black people, almost as this unrealistic fear of black people or people of color — what you don't know. But then, by the end, of it it pulls out and it shows is just a baby in a playground.

You used the proceeds from your first record to pay for this latest album. I think many people might remember that Chance the Rapper also declined to sign to a record label, choosing to function as an independent artist. Tell me why that's important to you.

I think it's important because it's possible and it's doable. I think ownership, in terms of just maintaining your integrity and how I feel as a woman of color, I just don't want my art to be owned by a white man. I wish it were more nuanced than just me being kind of stubborn in my own "fight the man mentality."But for me that's really what it boils down to.

I just personally like the the role of an entrepreneur. I grew up in that framework because my mother owned her own bookstore, my grandparents own their own landscaping company. So, I guess I approach everything with a very entrepreneurial spirit and mentality. Even though it's a lot of work and I have a very very slow rising career, very slow but I'm grateful for it because I've learned so much about myself through owning my own business you know.

Is there any part of you that feels like you're missing out [on the Grammys]? Is it like, "I'd like to be invited to the party even if I don't want to go"?

No, I don't feel like I'm missing out. I don't know, I've been thinking a lot about the Grammys and just the system of judging art and critiquing music. I guess some part of me still craves it, just because it's what we've taught ourselves is validation: a Grammy nomination or invitation, even. But I think I'm OK. I think I just am wanting to make better content and just keep growing artistically. I think that's where my main concern have been recently.

I think music plays into my faith in the way of allowing me to always feel connected. I use music to slightly articulate things about my faith, but I'm not truly religious or crazy spiritual. Sometimes I use the language of Christianity in my music and make references from that because that's just how I grew up. It's also kind of universal.

It's been a great year for female rappers! It's been crazy.

What does it look like from your point of view?

It looks amazing to me.I feel like this is probably like one of the best times in hip hop for women. I think right now we have such a beautiful variety of artists and everyone. There is this is very communal spirit between everyone. Like, at least of the women that I've met or talked to through social media, everyone is very supportive of everyone and it's really beautiful.

I also think that people's perspectives about women have changed, and people are interested in women's opinions about things, and the type of content and ideas that come from women. So, I'm really excited to see what the future has for these artists and for these new artists coming up, too.

The hyper-sexualization of women of color particularly it's been rife in popular culture. You know imagery and ideas that many people consider misogynistic have also sort of been a part of it. Do you feel that you need to answer to that or answer that or have something to say about that?

I think because of the art that I make people expect me to be outspoken about it and also because I because of the way I present myself. People are like "Well, she is always wearing button up so she must be like against the sexualization of women in the industry." Which I am if that's not what those women truly want for themselves. But I think what I would like to see — I don't know if I want myself to be the artist who is that or just something else in general — but I would just like to see more other variety with women in hip hop on a larger scale. Everyone knows Cardi B., whose name I would like to also exist in a world where like Tierra Whack will be as famous as Cardi B. You know what I mean? So, it's there's something to offset. So there's just not one mono like image of a woman.

And I think right now on the TV scale of things, on the red carpet, that's what we're seeing. And that kind of sucks. It kind of sucks when there is only one of anything, even if it just were only one of me. We need to exist in multitudes. But, yeah, I don't know. Patriarchy is really insidious.