Accessibility links
Why We Can't Break Up With Big Tech Gizmodo's Kashmir Hill spent six weeks trying to cut Amazon, Facebook, Google, Microsoft and Apple out of her life completely. "Spoiler," she says. "It's not possible." 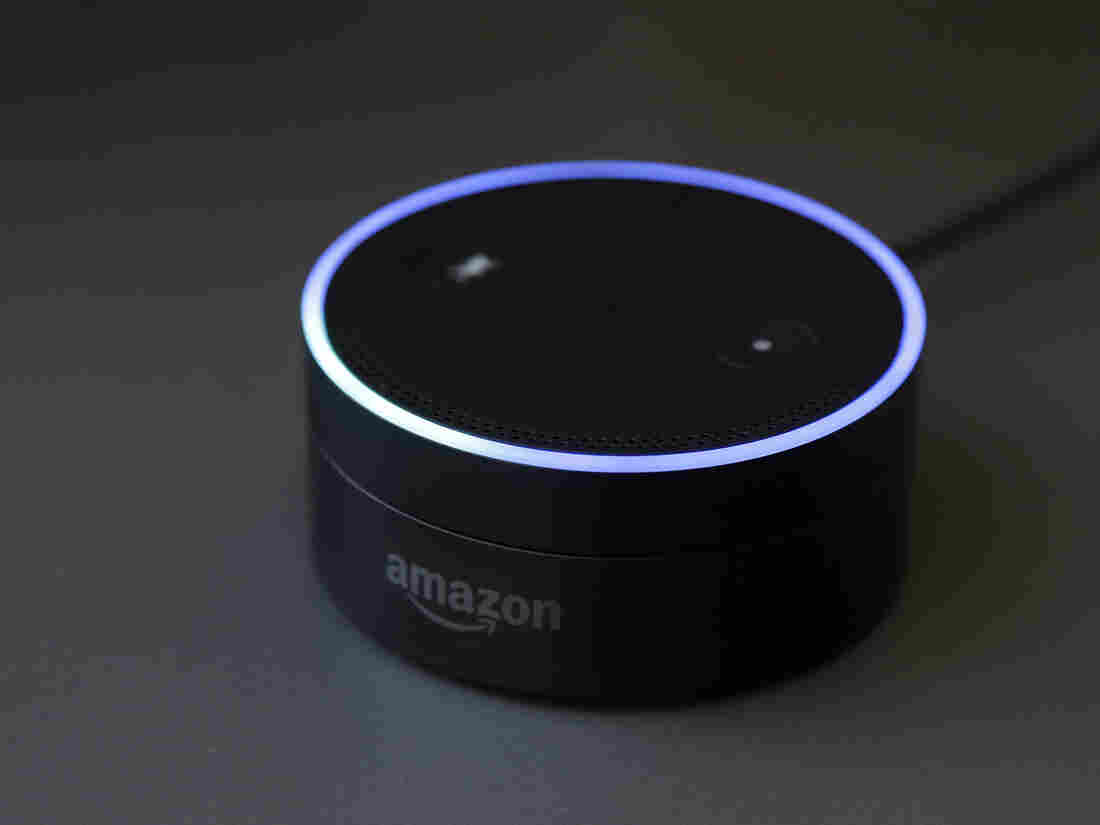 Gizmodo's Kashmir Hill tried to disconnect from all Amazon products, including smart speakers, as part of a bigger experiment in living without the major tech players. Jeff Chiu/AP hide caption 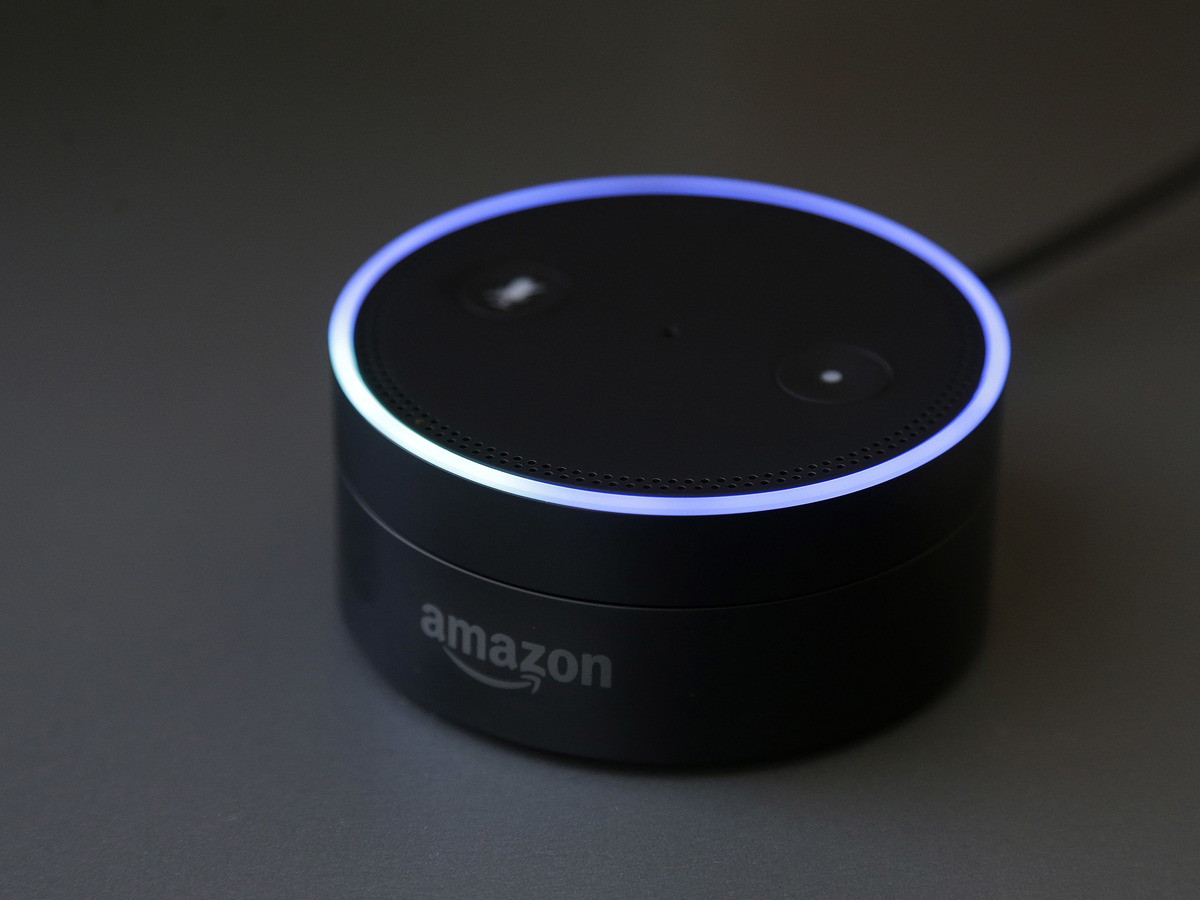 Gizmodo's Kashmir Hill tried to disconnect from all Amazon products, including smart speakers, as part of a bigger experiment in living without the major tech players.

Kashmir Hill wanted Amazon out of her life, completely.

It was the first week of a six-week experiment in living without tech giants. She had a virtual private network, or VPN, that would keep her devices walled off from any Amazon product. She would avoid Whole Foods and power down her Kindles.

But she had a problem. A small, chipper problem.

She couldn't connect her Amazon Echo to the VPN. But if she just unplugged the smart speaker, someone, like her husband, might forget and plug it back in.

Then a colleague suggested that she hide it. Say, in a drawer.

Hill was so used to Alexa's constant presence, the convenient timers and music on demand, that she hadn't even considered putting the device away.

"We've only had it for two years, and it already has the level of prominence where I couldn't have imagined just taking it off the counter," she told NPR's Weekend Edition. "I just can't believe that, especially since I'm a privacy reporter."

People will say, if you don't like the company, just stop using their products. I wanted to find out if that was possible.

Hill, a reporter and editor at Gizmodo, has tackled extreme tech experiments before, like living in a smart home and spending only Bitcoin for a week.

Last fall, she decided to try cutting off Amazon, Facebook, Google, Microsoft and Apple — each for a week, and then all at once. She wrote about her attempt for Gizmodo.

The experiment was inspired, she said, by the condemnations of tech behemoths. Critics say the companies are monetizing our attention, mishandling our data and profiting from our children. They've concentrated too much economic power. They're shaping our society in ways we don't fully understand yet.

"People will say, if you don't like the company, just stop using their products," Hill said. "I wanted to find out if that was possible, and, spoiler, it's not possible."

Beyond a surface level boycott, like deleting her Facebook account, Hill tried to sever any ties that usually funnel her data, money and attention to the five companies. Each publishes a list of IP addresses they control, so technologist Dhruv Mehrotra built her a VPN that essentially blacklisted those addresses.

Armed with that VPN and unmitigated determination, Hill put Alexa in a drawer and started her Amazon week. And it was as though a vast tract of the web blinked out.

"When I started pulling stats about Amazon, I was shocked," she said. The company reportedly controls nearly half of all online commerce. But the company's most profitable business is Amazon Web Services, or AWS, its cloud-computing arm that hosts apps and websites.

"They basically control kind of the backbone of Internet infrastructure," she said. "They're not just shipping packages out all over America. They're also shipping a ton of data to people's computers."

Netflix, HBO Go and AirBnB are among the many websites hosted by AWS, and therefore were off-limits to Hill during her Amazon week (though she would have been free to browse NPR.org). Work tools were also forbidden: AWS hosts Gizmodo's website, as well as the messaging platform Slack. At one point, her daughter cried over the digital entertainment blockade.

I would grab my iPhone and just start scrolling. It's how I started the day, every day.

Other companies presented unexpected challenges. Blocking Google meant she couldn't use Lyft or Uber, which rely on Google Maps. Going into any given coffee shop put her at risk of coming into contact with Microsoft, if the shop used Windows to operate its payment system. Cutting off Facebook left her feeling strangely isolated, pining for connection even at the cost of pervasive data surveillance.

And there were slip-ups, like when she ordered an item off eBay instead of Amazon, only to have it show up at her door in an instantly recognizable package. The seller had used Amazon to fulfill the order.

"The big thing I learned is that it's not possible to navigate the modern world without coming into contact with these companies," she said. "It made me certainly sympathetic to some of the critics who are saying these companies are too dominant in their spaces."

The exception? Apple. Hill says when she gave up her iPhone and stepped out of Apple's "walled garden," she had no trouble staying away from the company — and it wasn't collecting data on her.

But giving up her iPhone posed another challenge when she tried to block all five companies at once in the experiment's final week.

"Google and Apple have a duopoly on the smartphone market," she said. "So when I went out trying to find a smartphone that was not made or touched by either tech giant, it wasn't possible."

After searching in vain, she settled on a "dumb phone." She chose the Nokia 3310, an orange brick with T9 texting that has spawned countless memes — and perhaps even ensured its own continued existence — by being essentially indestructible.

"I went back to the '90s!" Hill said, laughing. "This experiment was a time machine."

A time machine, and a lesson, too. Before the experiment, the first thing she would do every morning, before touching her husband or talking to her daughter, was stare at a screen.

"I would grab my iPhone and just start scrolling," she admitted. "It's how I started the day, every day."

There was nothing worth scrolling through on the Nokia 3310, so she didn't bother. The smartphone fast broke her habit. Now she turns her phone off each evening, and she doesn't turn it on in the morning until she needs it.

"I got out of some bad tech habits," she said. "And I'm just kind of looking at screens less. So, if nothing else, I'm glad I did this experiment in terms of becoming a healthier tech user."