Accessibility links
U.S. And South Korea Reach Military Cost Deal Ahead Summit Under the agreement, South Korea will contribute about $890 million a year for the U.S. military presence — less than the billion dollars or more the U.S. had requested. 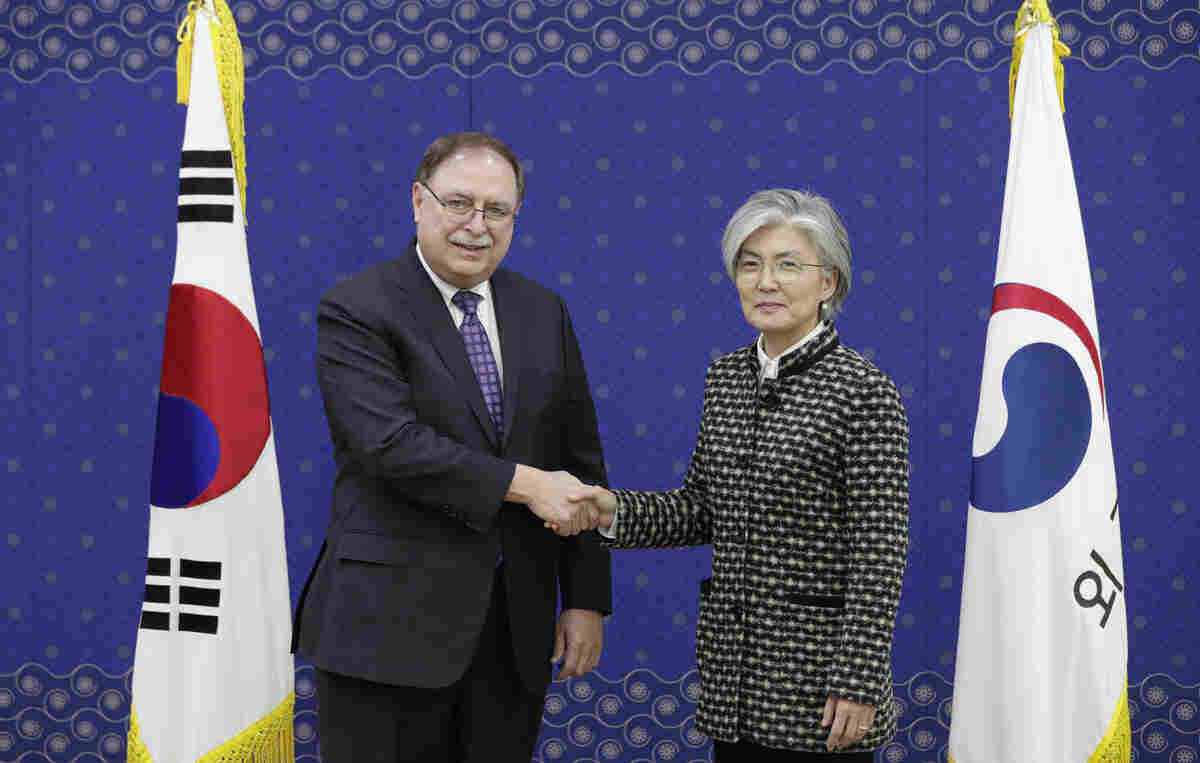 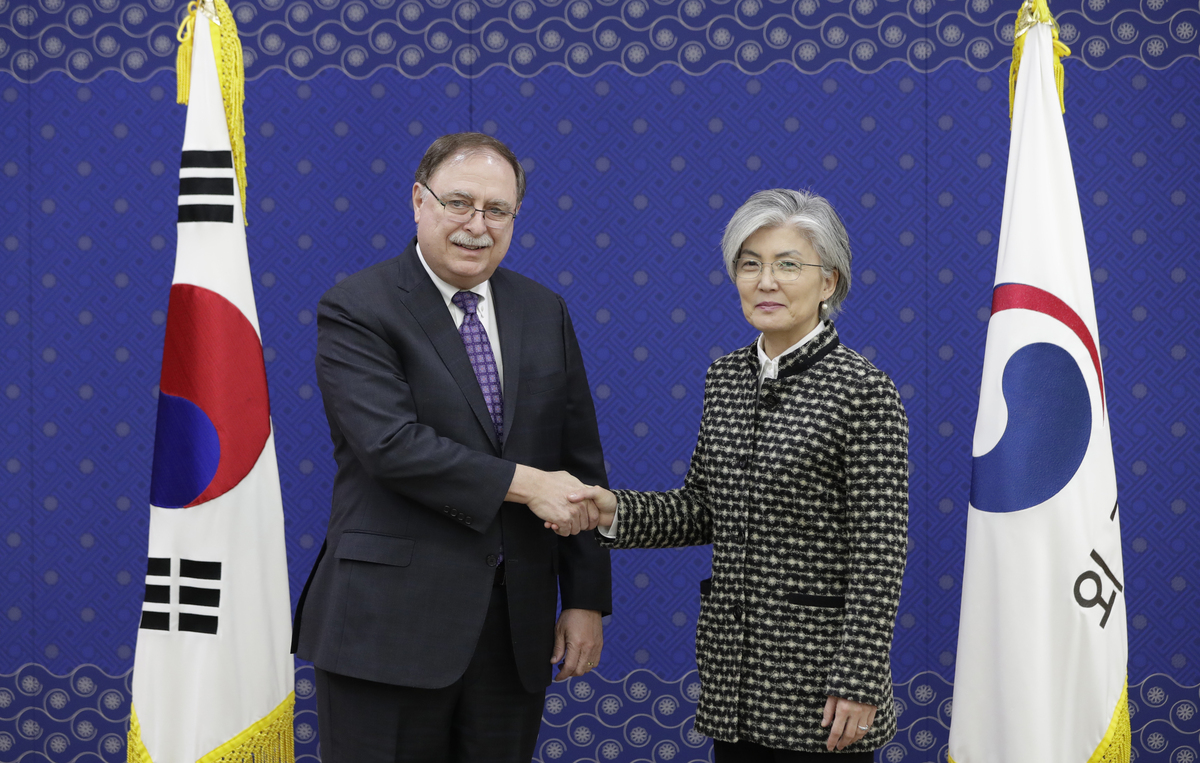 The United States and South Korea struck a hurried deal on the cost of the U.S. military presence, papering over a potential vulnerability in an upcoming U.S.-North Korean presidential summit later this month.

Under the agreement, South Korea will contribute about $890 million a year for the U.S. military presence, an 8.2 percent increase from the previous five-year deal that expired at the end of last year.

That's less than the billion dollars or more the U.S. had asked for. South Korea was already paying half of the cost of hosting United States Forces Korea, and the U.S. reportedly asked for a 50 percent increase or more.

The deal still needs to be ratified by South Korean lawmakers before taking effect.

Seoul had sought a three-to-five-year agreement, but only got one, so it will have to return to the negotiating table with the U.S. in a matter of months.

The Trump administration wants to strike similar deals with other allies who host large U.S. military bases, such as Japan and Germany, but South Korea's resistance could delay that, or make it more difficult.

Some South Korean observers worry that this marks a shift from a "rules-based international order, to a deal-based order," said Chung Kuyoun, a political scientist at Kangwon National University in the city of Chuncheon.

The U.S. insists that it was not considering pulling any of its 28,500 troops out of South Korea if its financial demands were not met. But it didn't really have to, as South Korean conservatives raised that possibility for them.

"I regret that President Trump made the unilateral decision to suspend U.S.-South Korean joint military exercises during the first U.S.-North Korea summit in Singapore," said lawmaker Won Yoo-chul, in an interview in his office at the National Assembly in Seoul. "I am concerned that he may make a similar decision regarding the USFK in the second summit with North Korea," he added, using the initials for the forces in South Korea.

Won, a member of the conservative Liberty Korea Party, represents the city of Pyongtaek, home to Osan Airbase, and Camp Humphreys, the largest U.S. military base outside the continental United States.

South Korea had resisted paying anything over a trillion won, or $890 million. Chung Kuyoun called the figure a "psychological limitation" for the South Korean public.

"Given that the economy is pretty bad, and income inequality is increasing, and average wages is going down," she said, "paying more money for the military forces will become a political cost for the current administration." 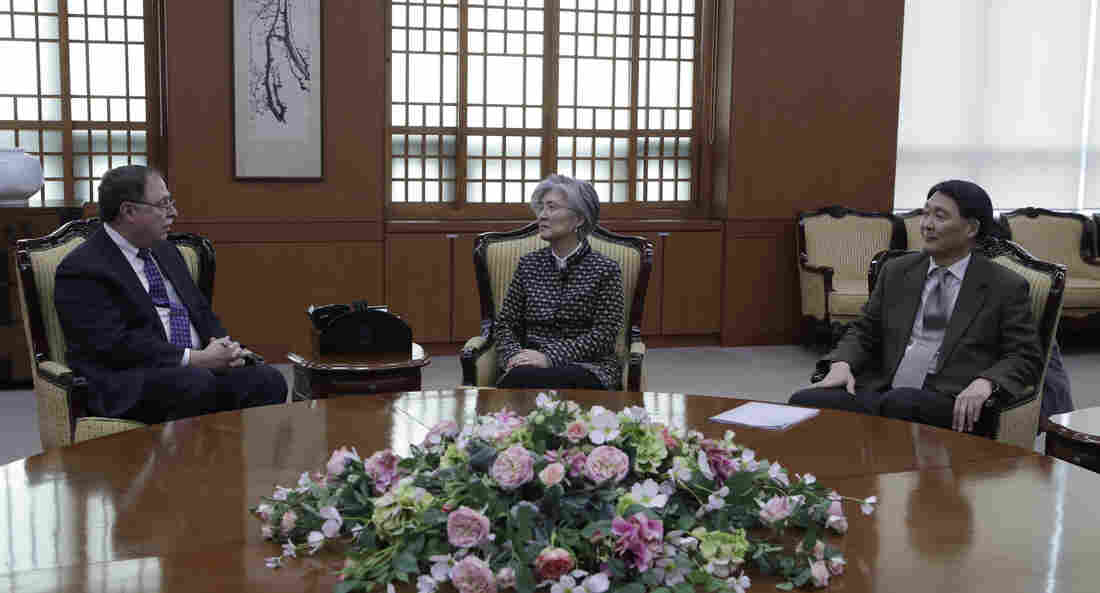 But ruling Democratic Party lawmaker Song Young-gil says, with the U.S.-North Korea summit looming, and with conservative lawmakers alarmed about a potential U.S. troop drawdown, Seoul was forced to go beyond the 1 trillion won threshold.

Song said Seoul resorted to a plan B, which was the 8.2 percent increase, the same amount as South Korea's increase in its annual defense budget.

Song, who represents the port city of Incheon, argued in an interview that Seoul should be paying the U.S. less rather than more, because U.S. bases in South Korea exist not just for the defense of South Korea, but to protect U.S. global interests.

"Camp Humphreys not only serves as a defense base against North Korea," he said. "It also serves to contain China and Russia, and to train U.S. forces deployed to the Middle East. So it makes no sense to call us freeloaders."

He admits, though, that USFK contributes to a strategic balance of power in Asia which benefits South Korea.

Song notes that the U.S. has also demanded cash payments for secure communication rooms on U.S. bases, known as Sensitive Compartmented Information Facilities, in addition to the formal cost-sharing agreement. The U.S. also wants Seoul to pay for the deployment of U.S. strategic assets, such as aircraft carriers and bombers, to the Korean peninsula.

Besides covering logistics and construction costs, South Korea's contribution pays salaries for the roughly 8,700 South Korean employees of the USFK. Ten rounds of negotiations since last March failed to produce an agreement, and the U.S. threatened to furlough the South Korean workers without pay.

But the employees who staff the U.S. bases could hardly just walk off the job, says Son Gi-o, an official with the trade union representing the workers.

"If we stop working simply because wages are not paid," he said, "the work of the USFK would be paralyzed, and that could pose a critical threat to national security."

Another union official, Choe Ung-sik, says that the U.S. negotiates Seoul's contribution based in part on the number of Korean employees it needs, but after getting the money from Seoul, the USFK then lays off some of those workers.

"If the number of laborers declines but their wages remain," he asked, "where does the difference go?"

The audio in this story, as in a previous Web version, incorrectly says Kangwon National University is located in Seoul. It is in Chuncheon.