Accessibility links
Majority-Muslim Turkey Becomes Less Religious, Poll Says Despite a rise in religious doctrine from the government, a recent survey shows a dip in the portion of people identifying as religious, compared with a poll in 2008.

Listen · 3:56 3:56
Turks Examine Their Muslim Devotion After Poll Says Faith Could Be Waning 3:56 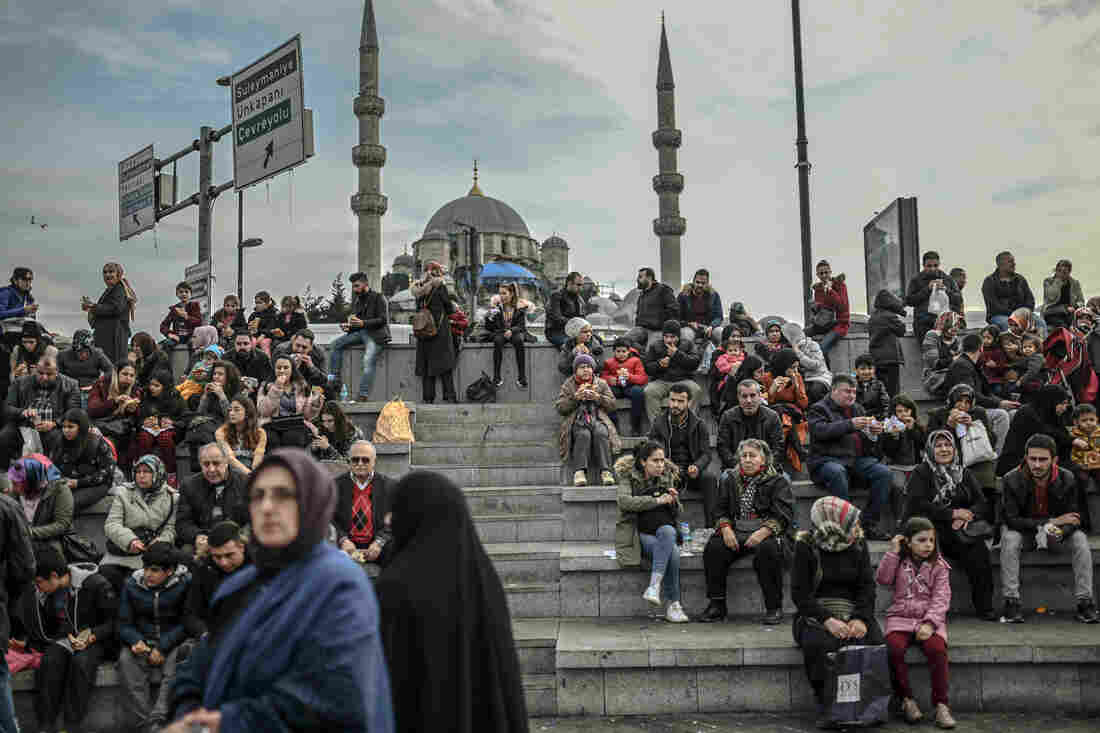 People enjoy an afternoon at Eminonu Square in Istanbul in January. A recent survey of personal beliefs and lifestyles in majority-Muslim Turkey has found a smaller portion of people describing themselves as religious. Bulent Kilic/AFP/Getty Images hide caption 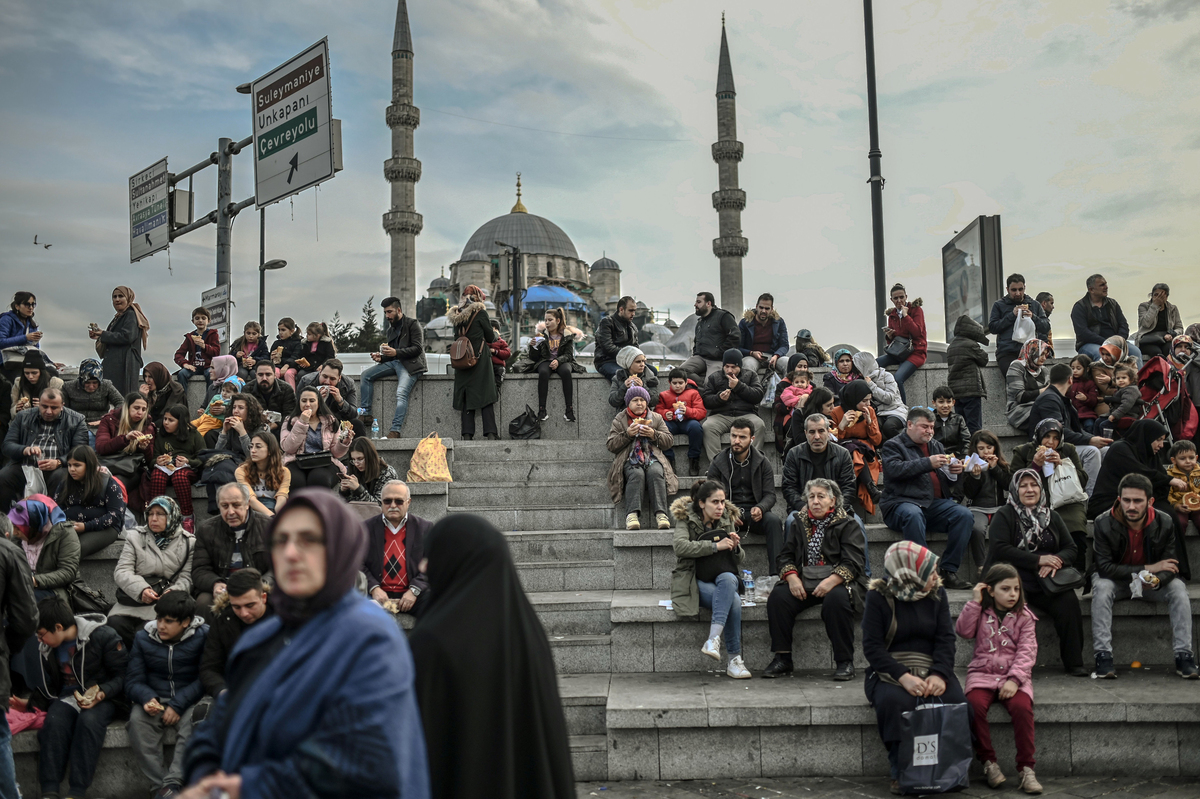 People enjoy an afternoon at Eminonu Square in Istanbul in January. A recent survey of personal beliefs and lifestyles in majority-Muslim Turkey has found a smaller portion of people describing themselves as religious.

Turkey has been governed for most of the past two decades by a party steeped in political Islam. So when a pollster recently surveyed personal beliefs, there was a finding that stood out: Levels of piety were flat, or even declining, compared with a decade ago.

The apparent shift is not seismic, but it has Turks talking about where their country is headed.

The survey, by the pollster Konda, is a follow-up to a similar poll in 2008, and the company broke down the results from each side by side to illustrate the comparison.

While some see changes a decade later as a natural progression, Turkish analysts say the shift could be a backlash, especially among the young, against a religious president and his push to form what he calls a "pious generation."

Faith down, religious education up

The percentage-point change for many of the questions is not dramatic: Respondents identifying as "pious" slid from 13 percent in 2008 to 10 percent in 2018, and those choosing "religious" dipped from 55 to 51 percent. Figures for "nonbeliever" and "atheist," which barely registered in 2008, are now at 2 and 3 percent, respectively.

There was, however, a significant drop in respondents calling themselves "religious conservative," from 32 to 25 percent. And those who say they fast during the Muslim holy month of Ramadan declined from 77 to 65 percent.

Other social customs could also be changing. According to the poll, the portion of respondents saying a man and a woman should have a religious marriage to live together was still in the large majority, but it fell 5 percentage points to 74 percent.

So why does the percentage of self-described faithful seem to be declining at all, even when voters keep re-electing political leaders who infuse their devout Muslim beliefs into their policies?

Analysts say President Recep Tayyip Erdogan and his Justice and Development Party started out with a strong focus on the economy, which was a major draw for the electorate. Over time, his administration's use of the state to promote religion became more strident.

In an official video in 2017, Erdogan celebrated the booming growth of state-funded Imam Hatip religious schools like the one he attended as a boy. At the time of the video, the schools were teaching some 1.3 million students across Turkey. 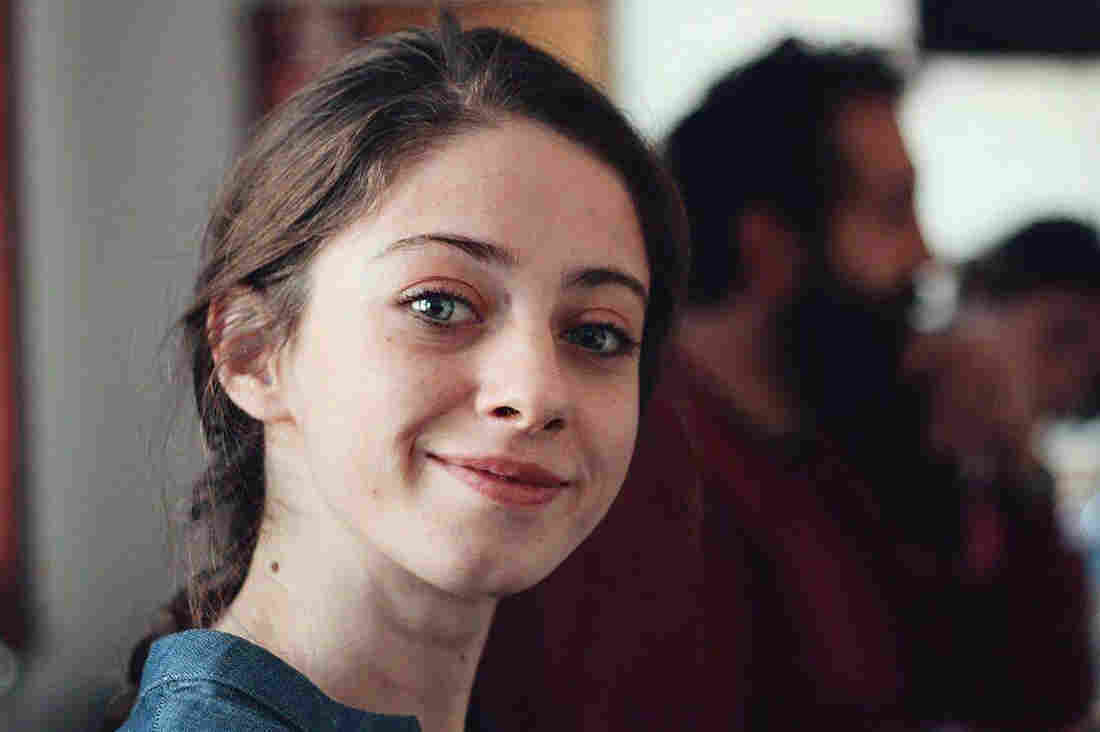 Busra Cebeci, a 25-year-old journalist, is from a Turkish generation that has had only one government leader for most of its members' lives. Courtesy of Murat Bayram hide caption 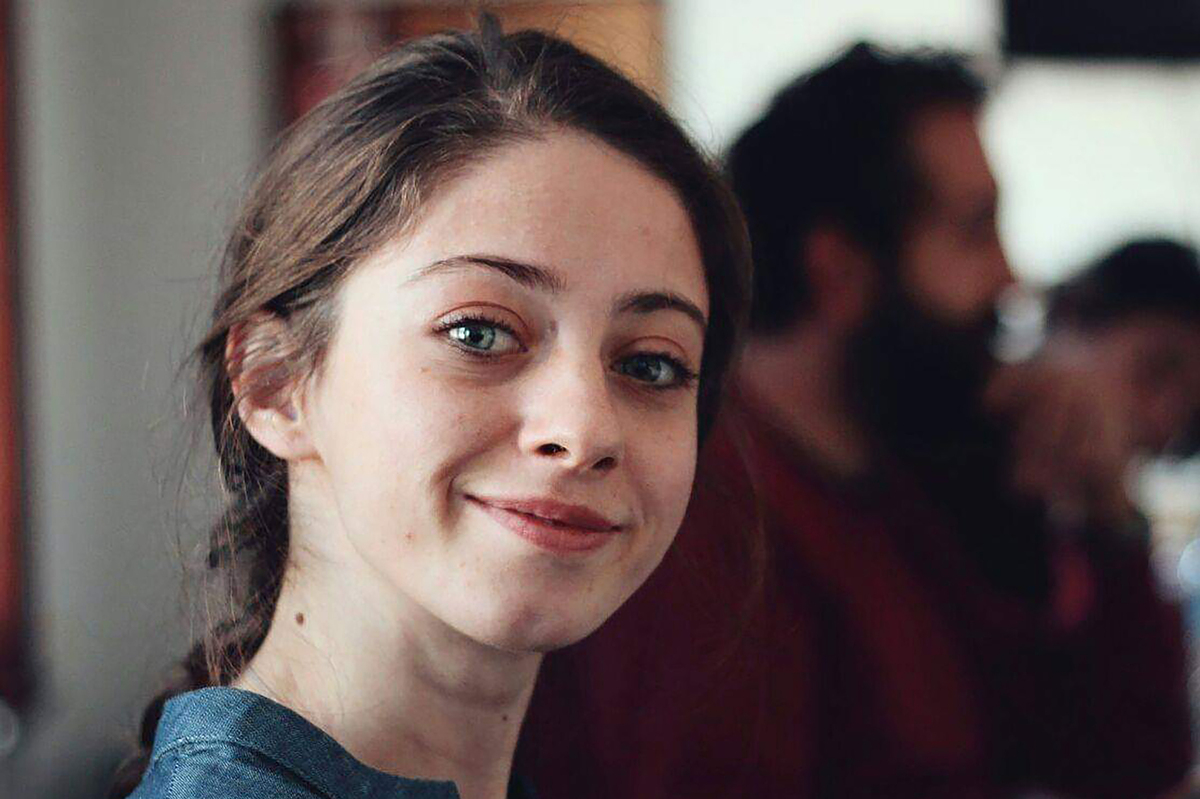 Busra Cebeci, a 25-year-old journalist, is from a Turkish generation that has had only one government leader for most of its members' lives.

Busra Cebeci, a 25-year-old journalist, is from a Turkish generation that has had only one leader for most of its members' lives. Erdogan came to power, first as prime minister, in 2003.

Speaking to NPR at an Istanbul cafe, Cebeci explained that she was raised to believe a headscarf is proper attire for a Turkish woman and that when she was a teenager, she put it on without protest.

But she began to have questions. She recalls practicing for a school performance one hot May afternoon several years ago and worrying about getting overheated.

In Iran Protests, Women Stand Up, Lift Their Hijab, For Their Rights

"I remember it was really hot," she says. "So I said to my mom, 'Maybe I should take this scarf off,' and she started yelling at me. I didn't take if off."

When she went away to college in Konya, a conservative Turkish city with a large student population, she remembers long talks with her friends about taking off their scarves. Then one day, she made a decision.

"I would look in the mirror, and I wasn't seeing myself," she says. "One day I went inside, I took off the scarf and walked out without it. And that was my first day."

She says it took two years for her father to speak to her again, but eventually her parents got used to it.

The recent lifestyle survey does not suggest a majority are changing their headscarf customs specifically, but it does mark a slight reduction in women who say they wear any head cover at all.

Analysts say declining religious behavior in Turkey despite the government's attempts to promote it should not come as a surprise.

The government's "very active and costly efforts to promote religiosity" don't appear to be having much effect, Murat Somer, a professor of political science and international relations at Istanbul's Koc University, said in an email to NPR.

In general, he said, "government control and state provision of religion usually alienate people from religiosity."

While the survey notes a slightly higher portion of respondents who regularly pray, those who say they fast during Ramadan dropped 12 percentage points.

Somer says he has also noticed that public religious acts such as attending Friday prayers appear to be continuing steady, while more private acts such as fasting are down. He explains this as religion "becoming more publicly expressive but at the same time more shallow in Turkey."

Erdogan has said he aims to create a "pious generation" that will "work for the construction of a new civilization."

That, Cagaptay says, is generating a backlash among young people.

"And I think the polls are showing that because Erdogan replaced the power of authority with his own identity of this conservative, religion-loving politician, a lot of young Turks are reacting to it," he says.

If these polls indicate a real trend, Cagaptay says, it could mean Erdogan's push to create a more religious Turkey is backfiring.

"So I think that Erdogan maybe is ironically making Turkey less religious, when he thought that he would make it more religious with himself on top," he says.

"I don't hate Islam," says journalist Cebeci. But she adds, "I haven't become secular because I quit [wearing] the headscarf; I was already becoming secular while still wearing it. My reaction was toward the government policies, trying to create a new, conservative generation — that's what I was against."

Cebeci believes a resistance to the push toward piety will continue to grow. She says her decision to take off her own headscarf, for instance, was a result of other women supporting her.