Accessibility links
After Parkland, Dick's Sporting Goods CEO Embraced Tougher Stance On Guns Ed Stack is a gun owner who was a longtime Republican donor. A year after Dick's Sporting Goods became an unlikely corporate face of gun control, it sees the fallout from its policy and lobbying. 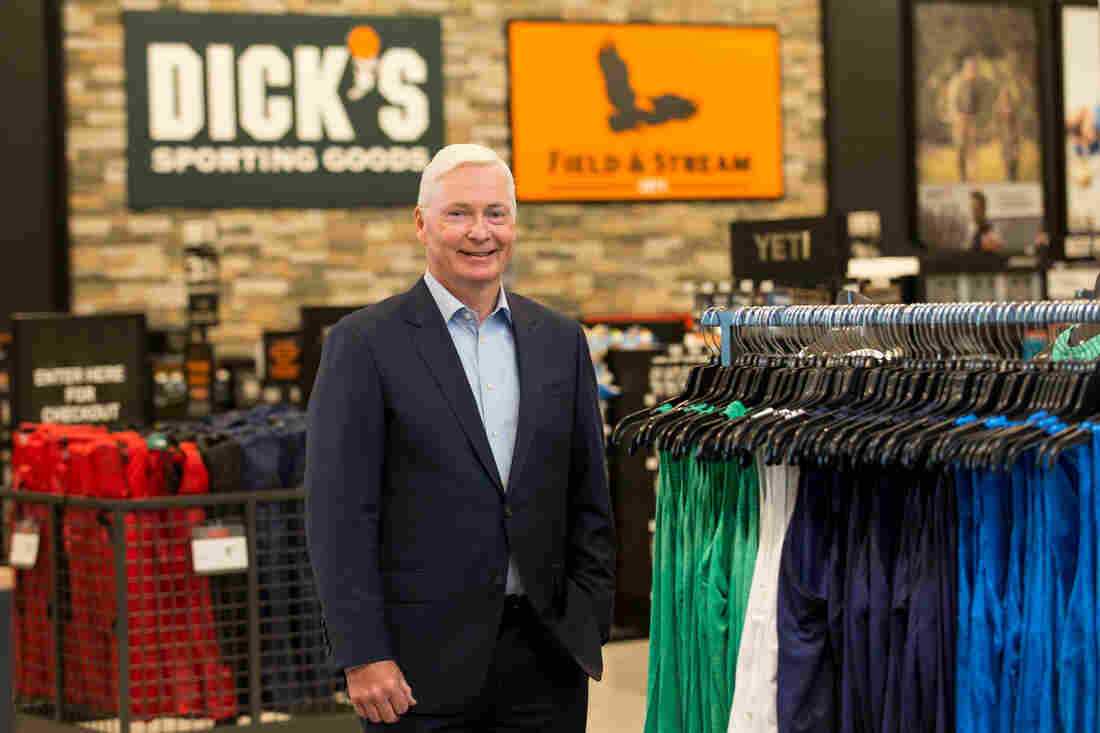 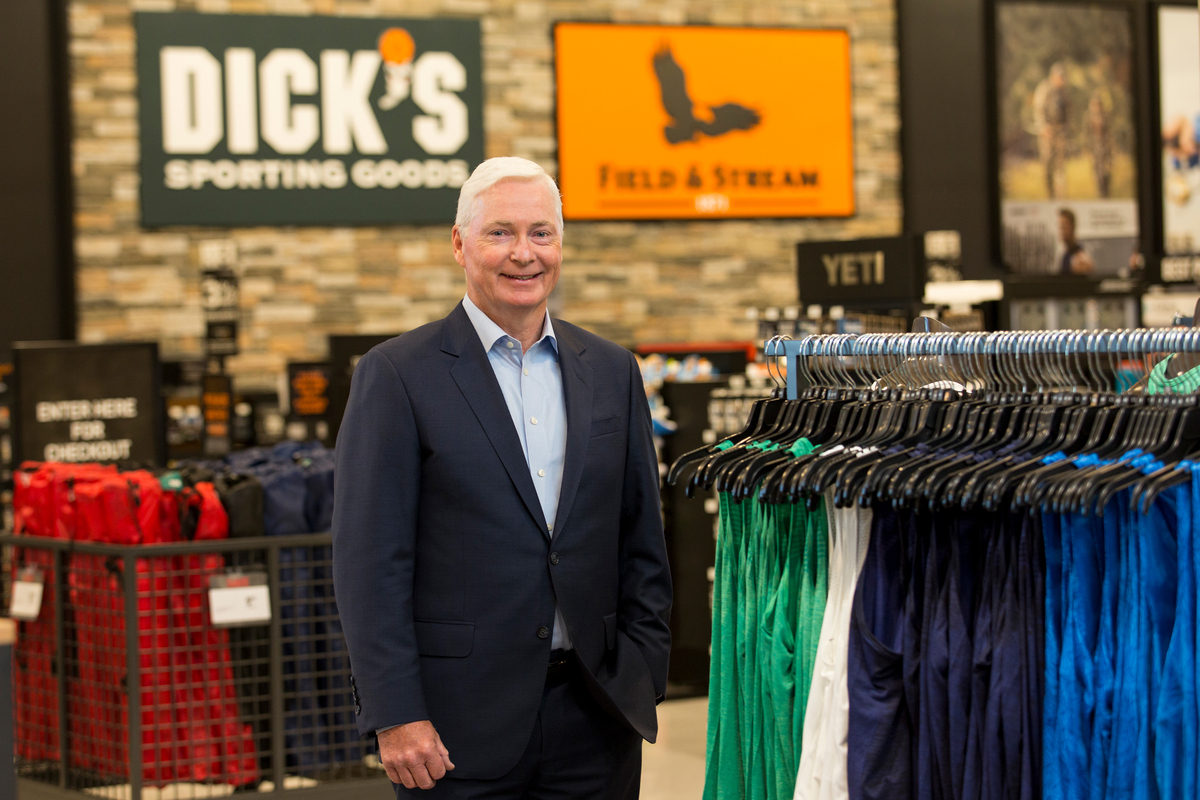 Almost nine months after the Parkland shooting, Ed Stack — the CEO of Dick's Sporting Goods — stood up in the audience of a New York Times conference. He got up to talk about restricting gun sales at his stores. He had done it many times before, but this time, he got personal.

"I'm not embarrassed to say I'm viewed as a relatively tough guy," Stack said. "I wouldn't characterize myself as a crier. And that weekend, I watched those kids, and I watched those parents, and I hadn't cried as much since my mother passed away."

His highly publicized tougher stance on gun sales and outspoken push for reform turned the now-64-year-old into an unlikely corporate face of gun control. To Wall Street, the company's new gun policy wasn't out of line with its business interests. But to most Americans, this was a staid, dependable athletics store suddenly plunging into activism.

One year after the Parkland, Fla., school shooting, Stack's early lobbying efforts have proved difficult. But on a corporate level, the company remains steadfast in its new gun sales policy. Dick's no longer sells the type of semiautomatic rifle used in the shooting, which is sometimes called assault-style or military-style. Dick's also no longer sells any firearms to people under 21.

This situation has been remarkable for several reasons. Dick's is the biggest sporting goods retailer in the country and has a subsidiary dedicated to hunting and fishing, called Field & Stream. Stack himself is a gun owner and was a longtime Republican donor. And Dick's is based in a Pittsburgh suburb — in Western Pennsylvania, where the gun rights debate is heated.

"Dick's Sporting Goods had a personal connection to Parkland and they were the first to take action of a lot of businesses that then followed suit: Walmart, the banks, insurance companies, credit card companies. Made a big difference in the NRA," said Fred Guttenberg, whose daughter was killed in the Parkland shooting and who says he personally knows one of Dick's executives.

Around Pittsburgh, where the memory of the mass shooting at a local synagogue in October is still raw, opinions on Dick's post-Parkland gun policies vary.

In the city itself and its liberal suburbs, people said they were proud of Dick's taking a tougher stand on guns. At Dick's stores around the city, most shoppers said the gun policy has not affected them or changed their shopping habits. Beyond the city, gun owners said they felt betrayed.

"I'll never shop there again. They'll never get another dime from me," said Jody Salerno, standing behind the counter of her gun store and shooting range, called Elite Firearms & Training, outside Pittsburgh. William DeForte, an instructor at her range, nodded.

"With it being a homegrown company, it was more of a slap in the face to Western PA. Our roots are pretty deep with the Second Amendment," Salerno said, as DeForte picked up her thought: "The gun-owning community, hunting, defense, all the shooting sports," he said. "They pissed off their core firearm customer base." 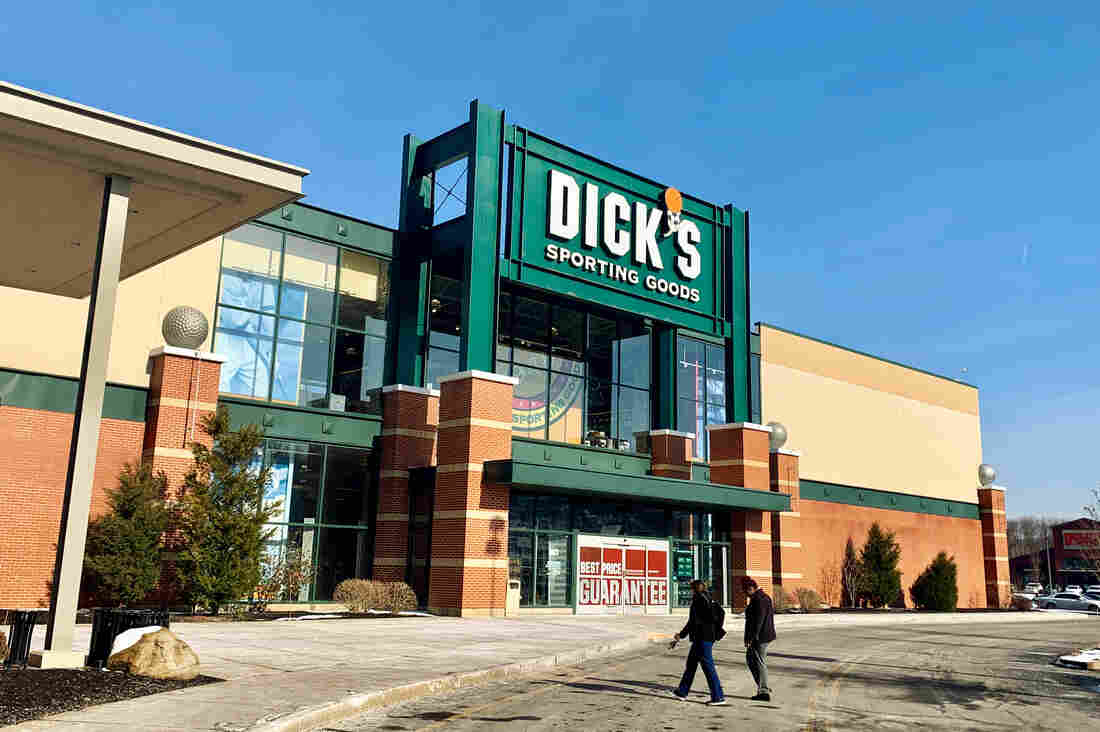 Many shoppers at this Dick's Sporting Goods near Pittsburgh said the company's new gun policy has not affected them or changed their shopping habits. Alina Selyukh/NPR hide caption 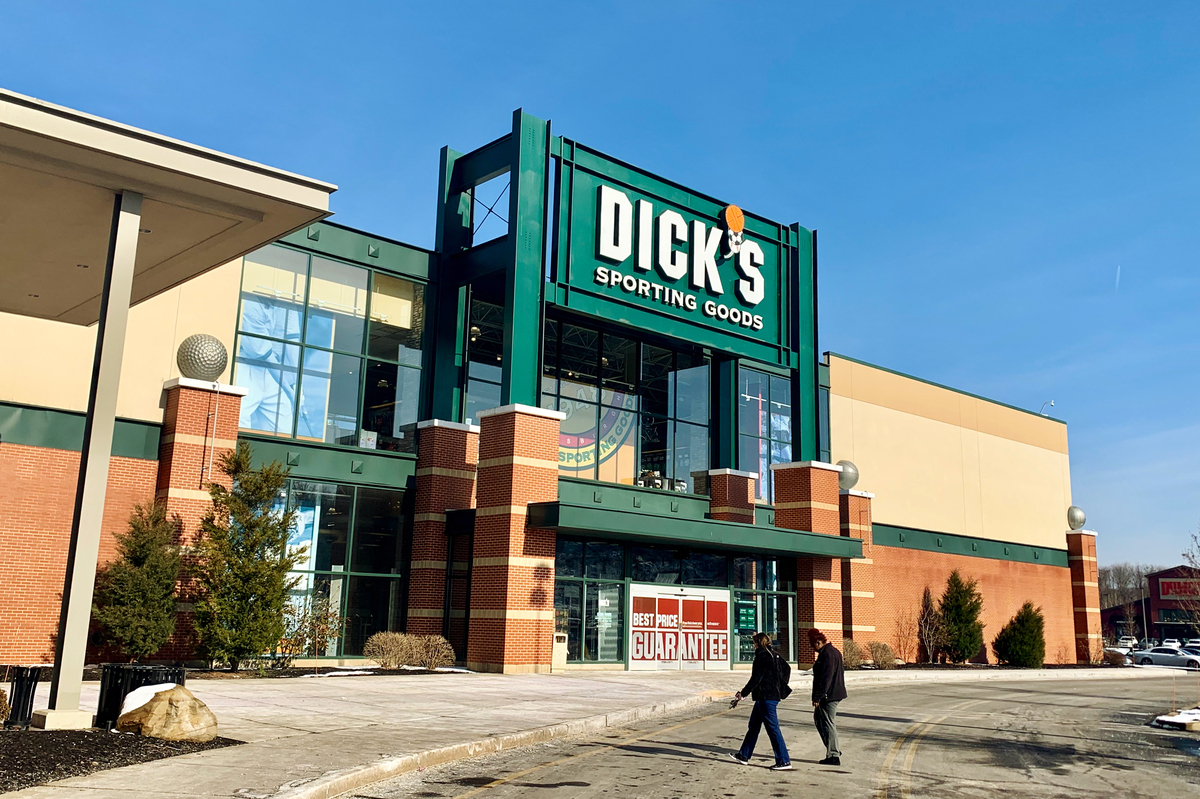 Many shoppers at this Dick's Sporting Goods near Pittsburgh said the company's new gun policy has not affected them or changed their shopping habits.

The most common take on the new policy at Dick's — even among its supporters — is that the company had a knee-jerk reaction to the shooting at Marjory Stoneman Douglas High School in Parkland. Seventeen people were killed, and an unprecedented wave of youth activism followed.

And indeed, the Parkland shooting was a game-changer for Stack.

Dick's executives ran the shooter's name through the internal systems and found that months earlier, the retailer had sold him a gun — while following all the laws. It was a different kind and wasn't used in the shooting. Still, in interviews that followed, Stack would point out how the sale illustrated a broken system, which he wanted lawmakers to fix.

Inside Dick's, this position had been percolating for some time.

After the shooting at Sandy Hook Elementary in 2012, Dick's stopped selling assault-style rifles. The company dealt with a backlash from the gun-owning community. Later, the rifles were back on sale only at the Field & Stream stores.

Dick's as a company is not known to go out on a limb. Take its headquarters, which is next to the airport for efficiency — instead of some snazzy downtown office. Its dress code did not officially allow jeans at work until 2017.

And people who know Stack will say he does not make rash calls.

"Every decision he makes in the company I think is very calculated, and he's made good decisions," said Jim Roddey, former chief executive of Pennsylvania's Allegheny County, home to Dick's Sporting Goods.

Roddey also used to chair the county's Republican Party, which in 2011 wanted Stack to run for the Senate. "We thought he would be a great candidate," Roddey said. "His story is wonderful. Here's the young son that took over and built this empire."

Stack's father — the eponymous Dick Stack — had started the company in 1948 almost on a dare, as a bait-and-tackle shop in Binghamton, N.Y. When his health declined, son Ed and Ed's siblings took over. Ed Stack opened the headquarters near Pittsburgh, took the company public in 2002. Including subsidiaries, Dick's now has more than 800 stores.

"That business is his religion," was how Roddey put it.

And so historically, Stack's political and corporate work aligned. When Dick's Sporting Goods would lobby Congress, it was usually about tax policy.

In all his interviews last year, Stack always mentioned his support of the Second Amendment. According to his company, he still owns guns and is a registered independent. Stack declined NPR's interview request.

After Parkland, Stack began calling on Congress to write new laws that would echo Dick's corporate policy: Ban assault-style firearms and raise the minimum age to purchase firearms to 21, among other things.

The key part of Stack's media campaign after Parkland was an open letter "imploring" lawmakers to act. Later, in an op-ed video for The Washington Post, he declared: "I suspect that many of our legislators know what's right. It's kind of a cliché, but leaders lead. They make difficult decisions."

In April, Dick's hired a lobbying firm in Washington to advocate for gun control, a move that conservative media critics chewed over.

But recent records show the company spent somewhere between $0 and $5,000 on the effort — barely anything by lobbying standards. The lobbying arm of the National Rifle Association, for example, spends millions of dollars every year.

Faced with gridlock and politicking ahead of midterm elections, Dick's Sporting Goods retreated from Capitol Hill.

"In the second half of 2018, Mr. Stack felt that no progress was made coming out of his meetings in Washington, D.C., as each member of Congress talked straight across party lines," a company spokeswoman said in a statement.

Instead, Stack decided to speak about gun laws and his company's restrictions at events, like that New York Times conference.

What's been the financial fallout for Dick's so far?

In November, the company reported a 3.9 percent dip in sales, dragged down particularly by hunting goods. Wall Street expects a similar trend to show up in Dick's full-year results due in March.

At the same time, the company's profit margin improved slightly. That's because guns and ammunition "tend to be very, very low margin," said Wedbush analyst Christopher Svezia. Dick's makes more money from selling most other items in its stores, like sports equipment or clothing.

And that's why Wall Street has been far less stirred by the Dick's story than the media, Svezia said.

For example, Walmart caused far less outcry when it stopped selling modern sporting rifles in 2015. The retailer simply said it was a business decision because those weapons weren't selling well. Last year, Walmart said it will also stop selling guns and ammo to anyone under 21 — right after Dick's made the same announcement.

And hunting has been a drag for Dick's for a long time. Fewer people hunt these days. Gun sales overall are in a decline because of what's known as the "Trump slump": The constant fear of a gun-ownership crackdown drove sales during the Obama years but has dissipated under President Trump.

Decline In Hunters Threatens How U.S. Pays For Conservation

In December, Stack disclosed that 62 employees had quit Dick's in response to the change in its gun policy. At least two of the resignations had gone viral on social media. One of them was by Griffin McCullar, who at the time was 20 and worked at Dick's in North Carolina.

"I honestly liked it a good bit, even up until the day I left," he said. "I got to talk to people about hunting and fishing every day." Both are his huge interests. So are guns and the Second Amendment. He says he worked a full day after the policy changed.

"My problem was I had 18-, 19-, 20-year-old Marines — I mean, we were right next to a Marine Corps base," McCullar said. "The U.S. government is handing them various different extremely high-caliber firearms. And I can't hand him a 12-gauge shotgun off the shelf to check out? That's where I had a huge disagreement."

McCullar said more of his co-workers agreed with him but couldn't quit as easily as he did. He also stopped shopping at Dick's, though he said he has plenty of friends who still do.

Stack actually mentioned McCullar's story in December as he disclosed the 62 resignations. He said he respected the man's handling of the situation — stating his disagreement with the policy without bad-mouthing the company — and would hire him back anytime.

"It's OK to have differing views," Stack said, speaking at a Wall Street Journal event. "We just have to respect each other and have a civil conversation."

McCullar said he wouldn't go back unless Dick's reversed its policy. "But it was kind of funny to me that [Stack] actually mentioned me in a good way," McCullar said. "I kind of can respect that a little bit."

In the audio of this story, as in a previous Web version, we refer to William DeForte as Jody Salerno's business partner. DeForte is an instructor at Salerno's shooting range.