Accessibility links
Book Review: 'Lost Children Archive,' By Valeria Luiselli Valeria Luiselli's twist on the great American road trip novel follows a family with two children on a grim odyssey through the Southwest, a vision of a country blighted by industry and prejudice. 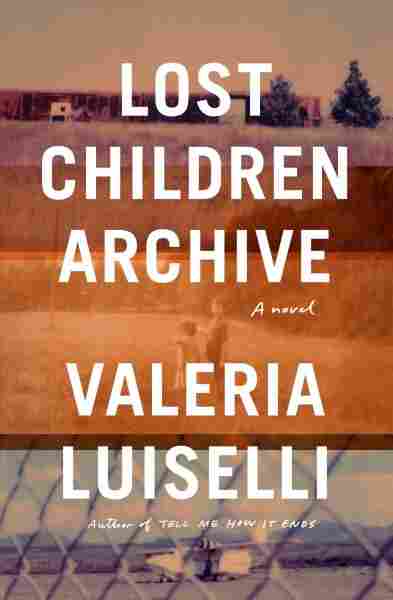 In 2015, Mexican-born writer Valeria Luiselli began volunteering as an interpreter in New York City's federal immigrant court. To say that her experience helping undocumented refugee children with the 40-question intake form had a major impact on Luiselli and her work is putting it mildly.

This was first evidenced by Tell Me How It Ends: An Essay in Forty Questions (2017), a powerful little chapbook in which Luiselli addressed the plight of these children and the chill of ICE. Now her brilliant new novel, Lost Children Archive, takes these issues — and this extraordinary writer — to a new level.

Read together with Tell Me How It Ends, Luiselli's third novel is, among other things, a fascinating demonstration of the interplay between fiction and nonfiction — and a window into how a writer can forge two very different books from the same raw material. Released from the constraints of journalism, her freewheeling novelist's imagination has created a daring, wholly original — though less direct — take on the issue of child refugees.

Both the essay and novel involve a cross-country car trip from New York City to the borderlands of southeast Arizona. In the essay, Luiselli writes of a family summer vacation she and her husband took in 2014 with their two children while awaiting their green cards. In Lost Children Archive, the nameless Mama and Papa are sound documentarians each pursuing their own project. They head southwest with the man's ten-year-old son and the woman's five-year-old daughter, referred to as "the boy" and "the girl" – a blended family forged four years earlier. The irony is that this voyage of intense togetherness threatens the survival of "the little tribe they have so carefully, lovingly, and painstakingly created." What divides them are goals pulling the two parents in incompatible directions.

Mama, the book's primary narrator, plans to return to New York after this trip, during which she is working on a story about missing child refugees, including the two daughters of a woman she helped in New York. The narrator's husband is documenting sounds, "chasing ghosts and echoes ... where the last free peoples on the entire American continent lived" before Geronimo surrendered to the "white-eyes" in 1886. He expects his project will take years. The boy is old enough to sense the tensions and worry about losing the family he's come to love.

The seed of Luiselli's novel is planted in her essay, when the author wonders, "Were they to find themselves alone crossing borders and countries, would my own children survive?" This upsetting thought, repeated almost verbatim in the novel, is a big, dread-inducing "uh-oh."

Luiselli, a formally experimental collagist of a writer who conceives of her work as a dialogue with various texts, has filled this novel with imbedded references and quotes from a semester's worth of seminal books and documents about road trips, Native American history, and immigration, which the family tote cross-country in seven boxes. Remarkably, these materials add edifying heft without weighing down the novel. Prime sources include Ezra Pound's Cantos and Jack Kerouac's On the Road, which she thoughtfully flags in her comprehensive notes (in sharp contrast with Vladimir Nabokov in his cross-country novel, Lolita, who made readers suss out his allusions on their own).

... what Luiselli has pulled off here is a twist on the great American road trip novel, a book about alienation as well as aliens that chronicles fractures, divides, and estrangement.

Still, between the parents' stony silences and the grim sights along their route, this trip is no joy ride. They drive through a country blighted by abandoned gas stations, churches, factories and motels. Luiselli's vision can be harsh. Instead of amber waves of grain, she sees "fields sectioned into quadrangular grids, gang-raped by heavy machinery, bloated with modified seeds and injected with pesticides." In response to repeated encounters with police and locals hostile to "aliens," they dodge conflict by saying they're French, or screenwriters working on a spaghetti western.

One of the trickier items in the mother's box is a red-bound volume called Elegies for Lost Children, purported to be the only work by an Italian writer named Ella Camposanto. This distressing chronicle of migrant children, a shadow book-within-the-book, serves as a repository for the boy's hazy Polaroid pictures and comes to play a pivotal role in Luiselli's novel. It is one of several instances in which the children are exposed to troubling material they are too young to fully understand. They deal with this information in part with backseat play-acting, pretending to be lost children in the desert who have run away from "white-eyes" and border patrol officers. The mother, struggling to find a way to do justice to her story of the lost children, wonders if perhaps her children's reenactments might do it best – and in fact Luiselli hands off part of the narration of this book to the preternaturally wise ten-year-old boy.

I was a big fan of Luiselli's 2015 novel, The Story of My Teeth, which I flagged as quirky, playful, and thought-provoking. Lost Children Archive is more sobering than playful, but what Luiselli has pulled off here is a twist on the great American road trip novel, a book about alienation as well as aliens that chronicles fractures, divides, and estrangement — of both a family and a country. Like her earlier work, it's a remarkable feat of empathy and intellectuality that once again showcases Luiselli's ability to braid the political, historical, and personal while explicitly addressing the challenges of figuring out how to tell the very story she's telling.