Accessibility links
Trump's 'Socialism' Attack On Democrats Has Its Roots In Cold War Fear President Trump is starting to give signs of how he will run for re-election, attempting to invert the attack on him as an extremist by painting Democrats as "radical" and socialist. 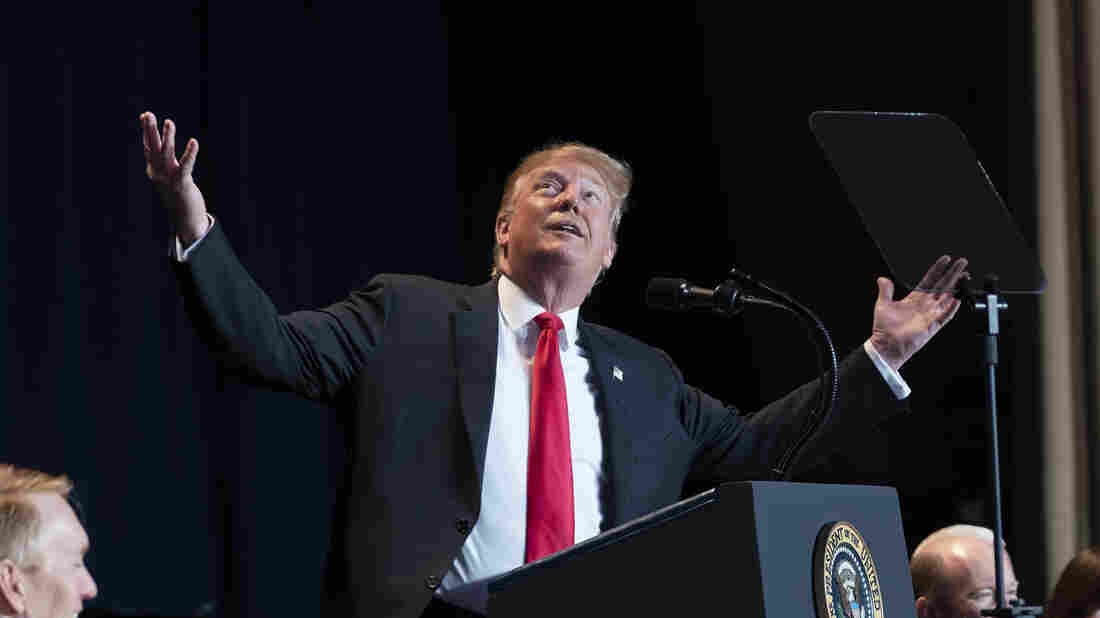 President Trump is starting to give signs of how he will run for re-election, attempting to invert the attack on him as an extremist by painting Democrats as "radical" and socialist. Chris Kleponis/Getty Images hide caption 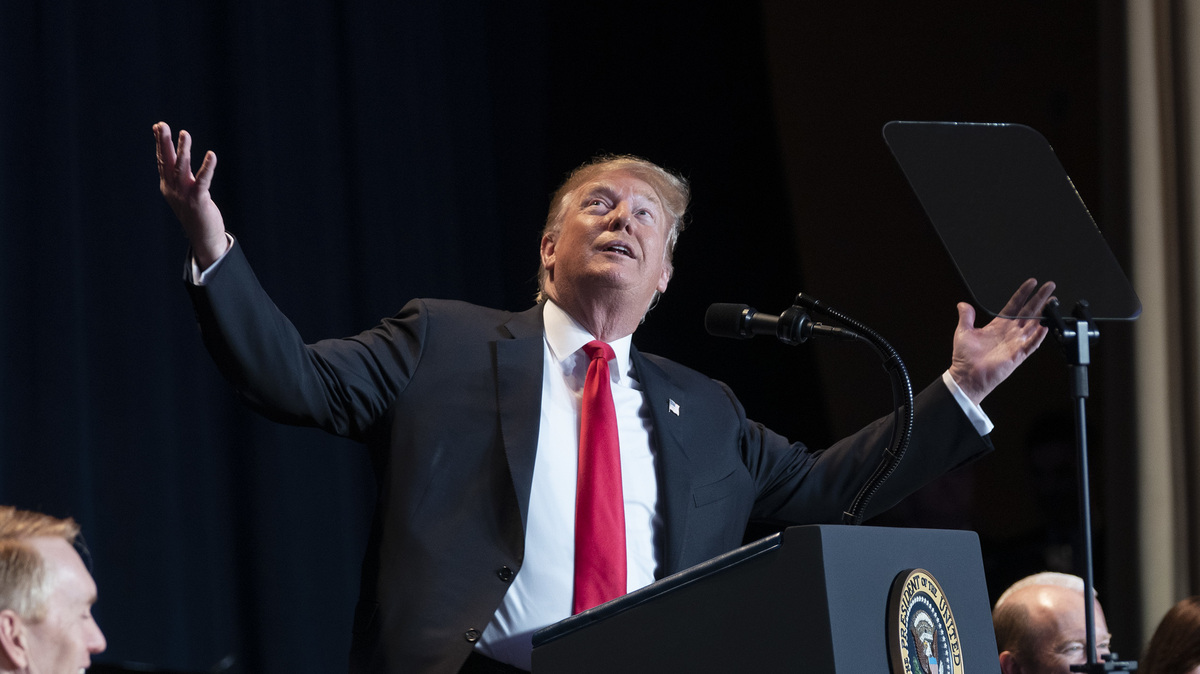 President Trump is starting to give signs of how he will run for re-election, attempting to invert the attack on him as an extremist by painting Democrats as "radical" and socialist.

There's a huge 2020 Democratic field forming for the chance to take on President Trump. Two more candidates officially announced over the weekend – Sens. Amy Klobuchar of Minnesota and Elizabeth Warren of Massachusetts.

And while those two potentially embody the core split within the Democratic primary – pragmatism vs. pugilism – Trump will be waiting in the general election with another distinction he hopes to make: "socialism" vs. "greatness."

"The Democrat Party has never been more outside of the mainstream," Trump said in El Paso, Texas, on Monday night in what was his first campaign rally of 2019. "They're becoming the party of socialism, late-term abortion, open borders and crime."

It's a message he began trying out a week ago during his State of the Union address. He tied the unrest in Venezuela to domestic U.S. politics.

"Here in the United States, we are alarmed by the new calls to adopt socialism in our country," he said. "America was founded on liberty and independence, and not government coercion, domination and control. We are born free, and we will stay free. Tonight, we renew our resolve that America will never be a socialist country."

The denunciation of socialism and the attempt to tie the philosophy to Democrats is Trump's and his campaign's attempt to invert the argument that he is an extremist. The president's sluggish approval rating means he is going to have to try and pull Democrats down with him — and given that surveys also show he would lose at this point to a generic Democrat, Trump also needs to show their candidates to be unelectable and out of step with the rest of America.

"He's the first president to never crack 50 [percent approval] in his first two years," said Bruce Mehlman, a Republican strategist and attorney who worked as an assistant secretary in the Commerce Department for technology policy. "The resistance is really energized, and that's part of why you saw the highest midterm turnout since 1914 last November. The economy has been really strong, but it's showing some worrisome signs. Mr. Mueller's report and/or Democratic oversight will likely make the waters choppier. And voters want change."

Republicans tried a version of Trump's inversion strategy to no avail in the 2018 midterm elections. They tried to paint Democrats as wanting to abolish ICE (the Immigration and Customs Enforcement agency) and create single-payer health care.

Republicans said if the election turned out to be about that, as opposed to a more nuanced discussion of border security and pre-existing conditions, they felt they could win or hold their own. It didn't happen. Instead, in an election where Trump was front of mind, Democrats won over suburban voters and independents, and took back the House by flipping 40 seats.

In 2020, Trump gets to try to make the argument himself. And people close to him think he can make a winning one.

"At the end of the day, politics and elections are typically binary choices," said Andy Surabian, who worked in the 2016 Trump campaign war room, was political director for Tea Party Express and is now a political adviser to Donald Trump Jr. "The biggest gift to Trump is for Democrats to nominate what I call a 'kneeler,' someone who supports kneeling for the national anthem."

Mehlman added: "If the Dems are able to nominate a presidential nominee that appeals to the middle of the country, that's going to be very powerful. But if they go hard left, there is a path for Donald Trump to get re-elected."

It is, in theory, an advantage a president has when he's up for re-election with a locked-down base and no primary opposition — yet. His potential Democratic opponents will have to outflank each other, and that often can mean being the most stridently progressive (or conservative, in GOP primaries).

The new debate over "socialism" 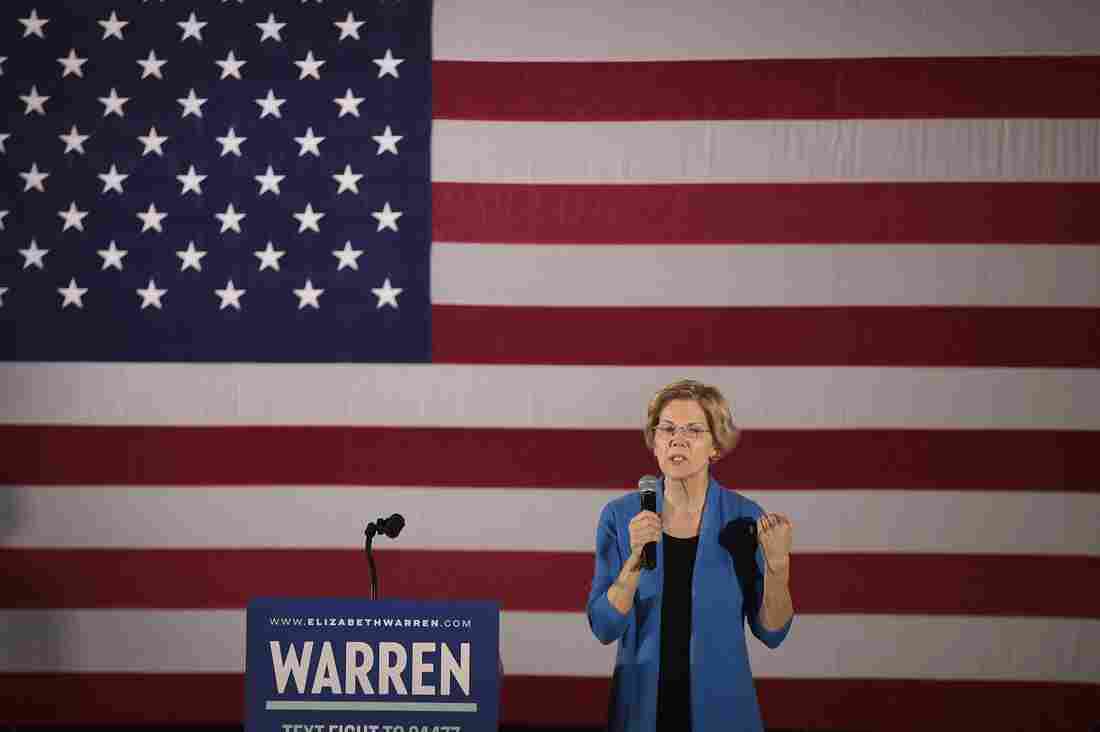 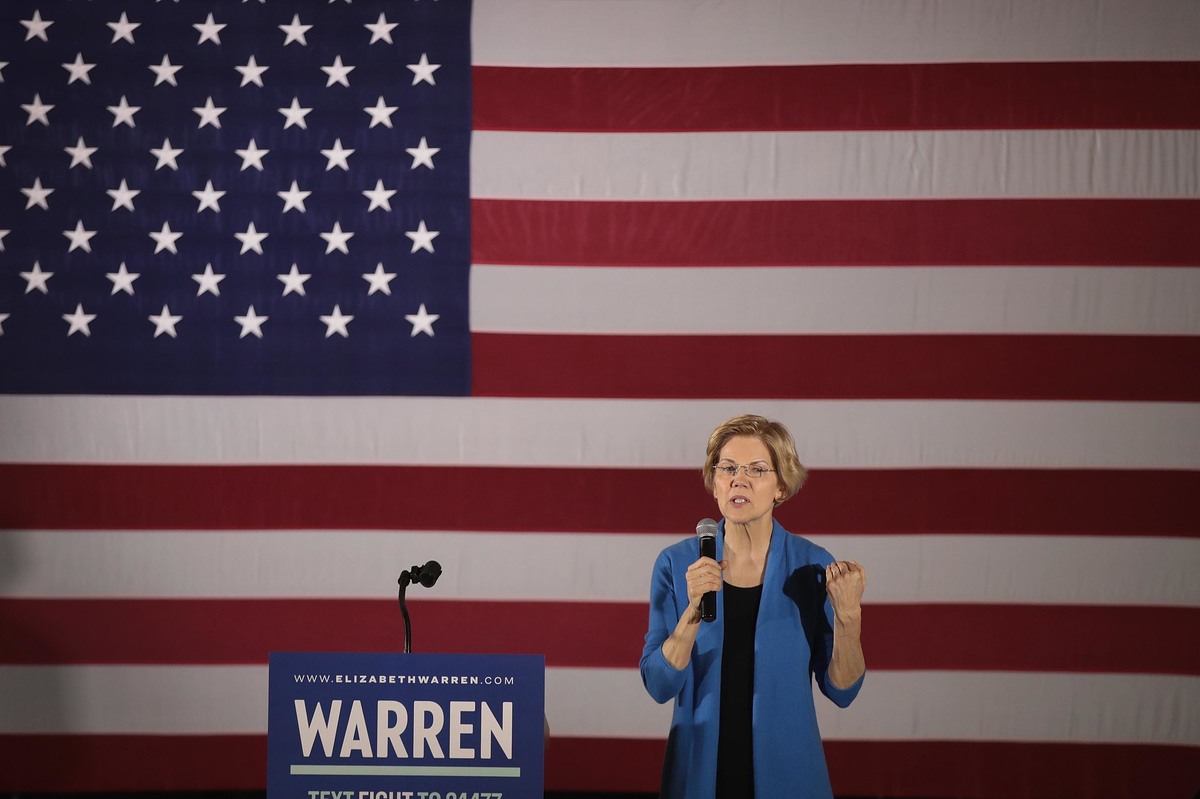 Sen. Elizabeth Warren, D-Mass., speaks at a campaign rally at the University of Iowa on Sunday.

Already, many of the Democrats running or thinking about it are embracing Medicare-for-all and the Green New Deal. Both of those ideas have been put forward by the party's two highest-profile democratic socialists — Vermont Sen. Bernie Sanders, an independent who caucuses with the Democrats, and New York Rep. Alexandria Ocasio-Cortez.

This is a fairly new debate to be taking place within the mainstream of the Democratic Party rather than at the fringes. Sanders caught fire in the 2016 primary race and gave a surprisingly strong challenge to Democratic front-runner Hillary Clinton. Sanders didn't prevail, but the boldness of his ideas did.

It's going to be interesting to see how Democrats walk and define the line when it comes to socialism. The word makes many Americans — and some Democrats, especially older ones — uncomfortable.

A remarkable shift has happened in just the past decade, since the 2008 financial collapse — more Democrats now have a positive view of the word "socialism" (57 percent) than "capitalism" (43 percent), Gallup found last year.

That diverges from the country overall, as only slightly more than a third (37 percent) of Americans have a positive view of socialism. Socialism also rates lowest when people are asked about it in a list that includes small business, entrepreneurs, free enterprise, capitalism, big business and even the federal government. Since Trump's election, however, socialism is the only one on that list to gain popularity.

This younger generation, after all, are not Cold War kids. Someone who is 29 was born the year before the fall of the Iron Curtain. The word socialism just doesn't have the same meaning for them as for those who lived through the nearly 50-year, post-World War II arms race with the Soviet Union and the underlying debate over the ideal society.

As viewed by Americans, that debate was between the free, capitalistic West on one side and the repressive communism and socialism of the USSR on the other.

Some Democrats are trying to find more nuance. Sen. Brian Schatz of Hawaii, for example, sparked an interesting debate on the left with his tweet that he's "not a socialist" but does "believe that every American deserves health care," that "college should be debt free, and that America must lead boldly on climate change."

And Schatz may be on to something. When younger voters respond positively to "socialism" in polls, they're not saying they want the country to become like Venezuela or Cuba. To them, "socialism" is synonymous with a strong social safety net and an economy where big banks and billionaires pay — proportionately — their fair share in taxes.

President Trump is moving aggressively to define the Democrats as old-fashioned, Cold War-style socialists. Now, it's up to the Democrats to define what it is they are for.

Much of the difference comes down to semantics — the wording and view of what socialism really is.

The problem, though, is nuance doesn't usually play well in campaigns, especially in primaries.