Accessibility links
Trump, Beto O'Rourke Hold Rallies In El Paso In a near-showdown that seemed to mirror the ongoing dispute over the border, Trump was greeted by a counter-rally led by Democrat Beto O'Rourke, who has criticized the president on immigration. 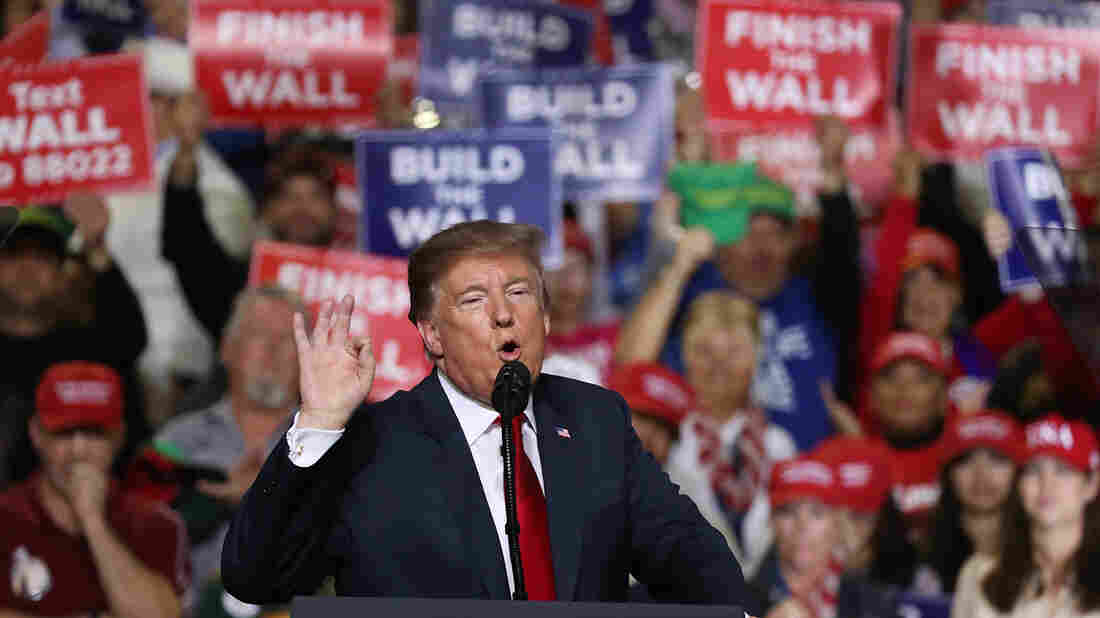 President Trump speaks during a rally Monday in El Paso, Texas, where he was greeted by a counter-rally led by Democrat Beto O'Rourke, who has criticized the president on immigration. Joe Raedle/Getty Images hide caption 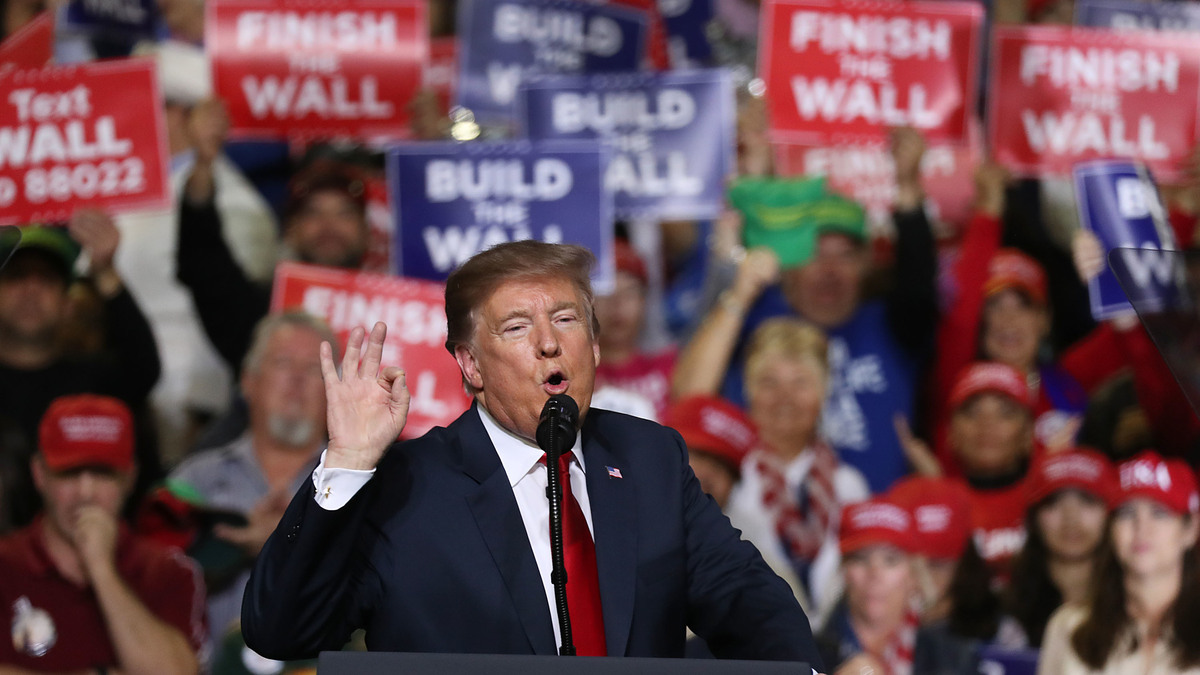 President Trump speaks during a rally Monday in El Paso, Texas, where he was greeted by a counter-rally led by Democrat Beto O'Rourke, who has criticized the president on immigration.

President Trump took his fight for a wall to the U.S.-Mexico border on Monday night, promising a crowd in El Paso, Texas, that he would press forward for its construction — even as news was breaking in Washington that a deal reached between congressional negotiators would fall far short of his funding demands.

And in a near-showdown that seemed to mirror the ongoing political dispute over the border, Trump was greeted by a counter-rally led by Democrat Beto O'Rourke. The former Texas lawmaker failed last year in his effort to unseat GOP Sen. Ted Cruz but could parlay his newfound celebrity with Democratic voters into a 2020 bid to unseat the president — a White House bid that could especially challenge Trump over immigration policy, border security and the propriety of building a Southern border wall.

But the bigger threat to the message about the need to secure the border that Trump was trying to deliver was coming from many miles away. As another partial government shutdown loomed, bipartisan negotiators on Capitol Hill emerged with a deal Monday night for $1.375 billion for "physical barriers" at the border (the same level that was agreed to in last year's Department of Homeland Security funding bill). This will fund about 55 miles of fencing.

On stage, Trump claimed he didn't know the details and "didn't want to hear about it," sticking to his robust talking points on the border wall.

"As I was walking up to the stage, they said that progress is being made with this committee. Just so you know, we're building the wall anyway," he said to raucous applause, underneath "Finish The Wall" banners.

Speaking in an interview with Fox News conducted on the sidelines of the rally, Trump suggested he didn't know many of the specifics of the deal and said: "We'll see what happens." About his push for a border wall, Trump said his desire for a physical barrier is about safety. "A wall is a very good thing, not a bad thing. It's a moral thing," the president also said in the interview. 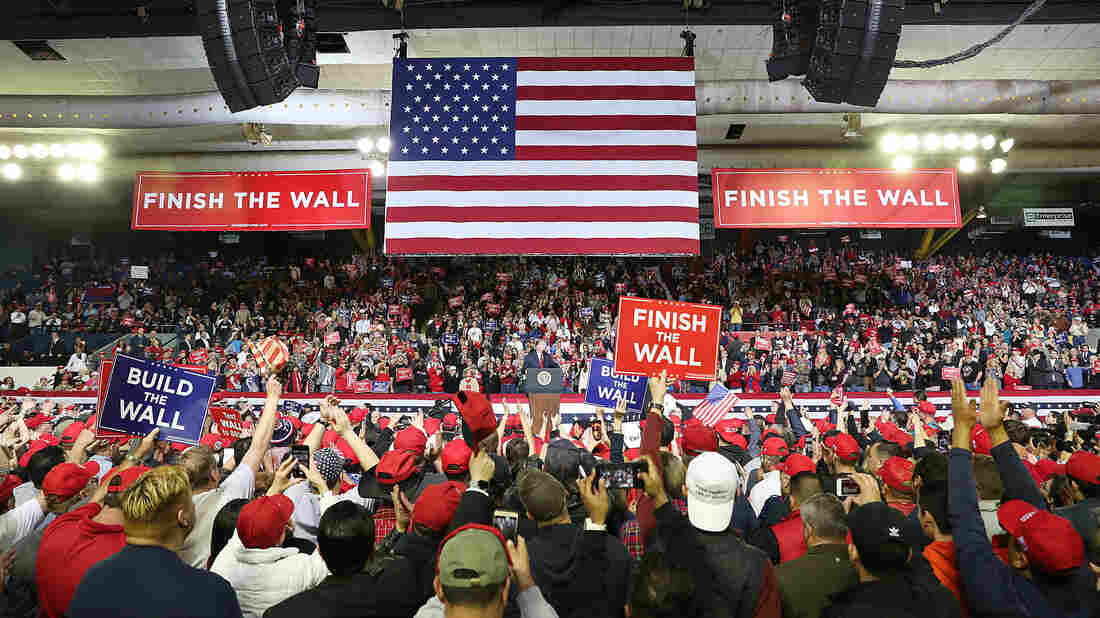 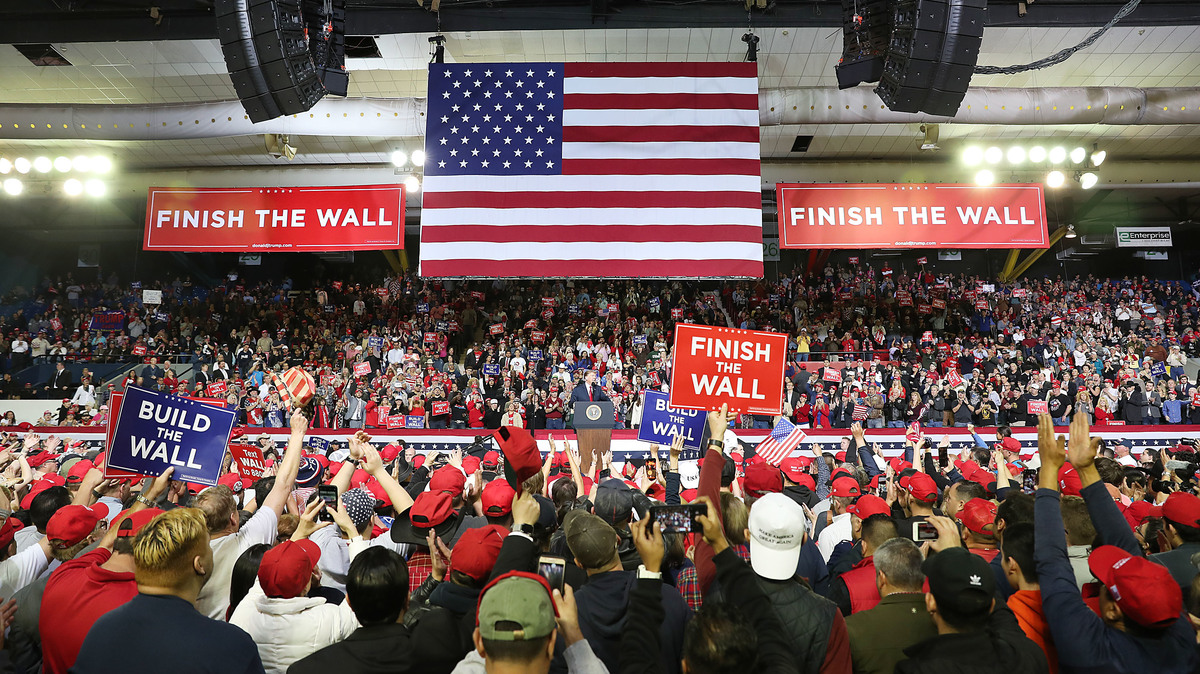 The Trump administration has frequently exaggerated about how many new barriers along the border are being built compared with those being repaired. And the selection of a rally in El Paso was no accident either — Trump has often highlighted the border city as evidence that walls work, noting the low crime in the U.S. border town compared to its Mexican counterpart. However, statistics have shown that violent crime already had dropped well before the border wall was erected in El Paso.

Trump dismissed those facts though, calling them "fake news" and saying people are "full of crap if they say it hasn't made a difference."

The president also claimed that the 35-day partial government shutdown over the wall — the longest shutdown ever in U.S. history — "was a very important thing we did" because it turned attention to the border crisis, even if it did cause a "blip" in a rise in unemployment. Multiple polls also showed most Americans blamed Trump and Republicans for the shutdown, and his approval ratings also dropped.

If Trump doesn't accept the deal lawmakers will present to him this week, another shutdown could begin just after midnight Saturday — though Trump also has threatened to build the wall via the declaration of a national emergency if necessary.

The whole rally largely stuck to Trump's usual talking points — ticking off economic successes, trade deals, boasting about his relationship with North Korean leader Kim Jong Un and rehashing much of what he had said last week in his State of the Union address. 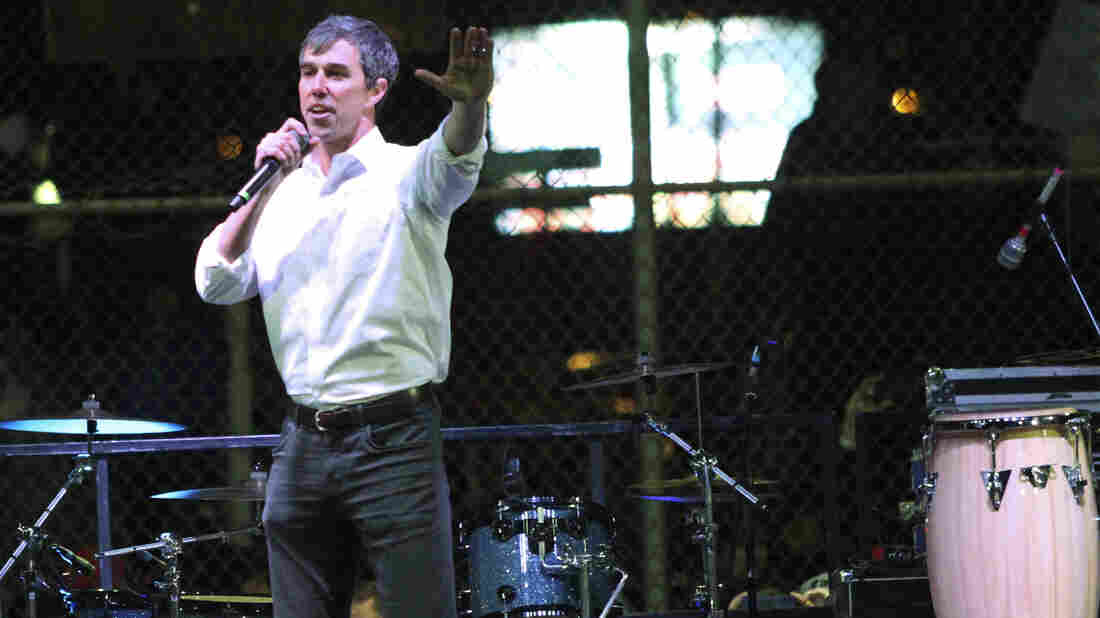 Beto O'Rourke speaks to a crowd across the street from where President Trump was holding a rally in El Paso, Texas. O'Rourke directly took on Trump over border security and Trump's desire for a wall or other physical barrier. Rudy Gutierrez/AP hide caption 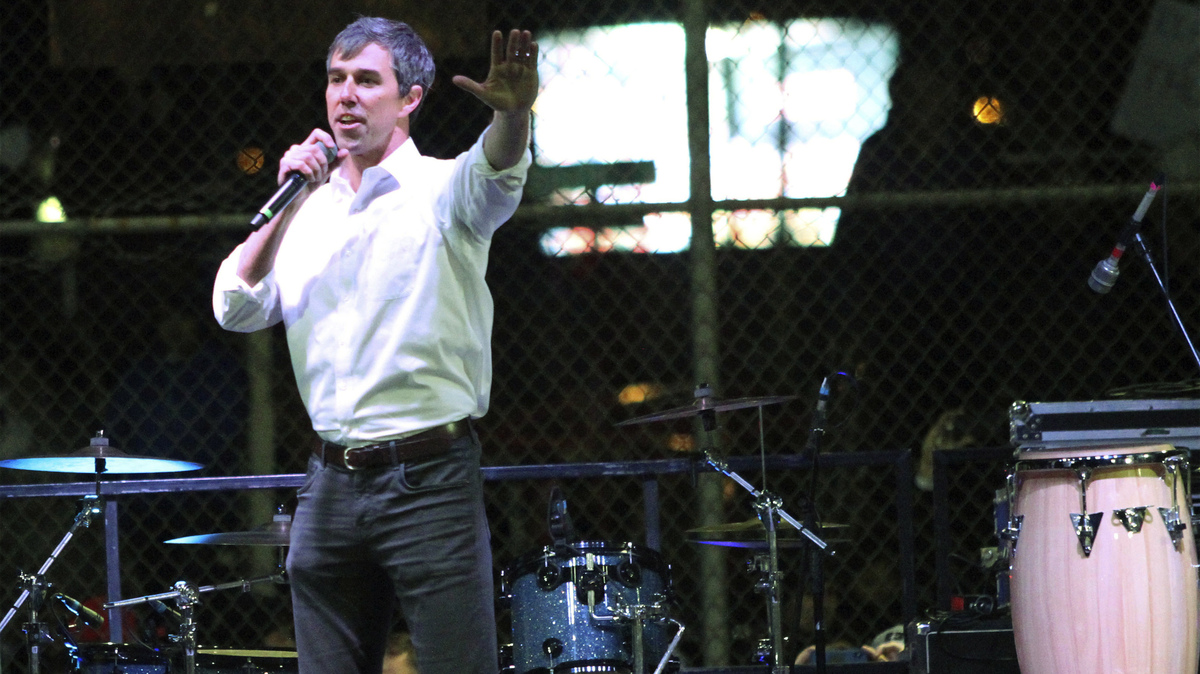 Beto O'Rourke speaks to a crowd across the street from where President Trump was holding a rally in El Paso, Texas. O'Rourke directly took on Trump over border security and Trump's desire for a wall or other physical barrier.

But Trump seemed especially attuned to and plenty sensitive about the split-screen image of the rally O'Rourke, El Paso's former congressman, was holding outside in the heavily Democratic city. Exaggerating, as he's prone to do, about his crowd size, Trump claimed that O'Rourke had only drawn 200 or 300 to his protest while they had 35,000 people trying to get into his.

"That may be the end of his presidential bid," Trump said, mocking O'Rourke as "a young man who's got very little going for himself except a great first name."

"He's supposed to win in order to run," the president jabbed. "Beto was defeated," Trump said, referring to the race against Cruz, as the president boasted of his own undefeated record in his first bid for office.

According to NBC News, O'Rourke's team said there were about 7,000 people at his rally and mile-long march beforehand, per law enforcement. And Bloomberg News reported that O'Rourke's rally had been estimated at 10,000 to 15,000, according to local police. At various points during his own rally, Trump claimed that 69,000 people had RSVP'd and that fire marshals allowed 10,000 people in with "tens of thousands" still watching outside. But NBC News reported that Trump's rally was at its 6,500 capacity with 10,000 to 12,000 watching outside or in overflow areas, per the local police and fire departments.

O'Rourke directly took on Trump over border security and Trump's desire for a wall or other physical barrier. He said El Paso was a peaceful and safe city "because we treat one another with dignity and respect."

"We know that walls do not save lives; walls end lives," O'Rourke also told those gathered at his rally.

He also criticized the Trump administration's treatment of immigrants, from separating children from adults at the border to housing migrants in detention centers, and just a general vilification of the contributions of immigrants.

"We are making a stand for truth against lies and hate and ignorance and intolerance," the potential 2020 Democratic candidate said. "We are going to show the country who we are. We're going to make a stand to ensure that we live up to our promise, to our potential, to our purpose as a country."

"We will not take advantage of them," O'Rourke added about immigrants. "We will not send them back to certain death. We will not believe that walls can or should keep them out. Instead, we welcome them with open arms." 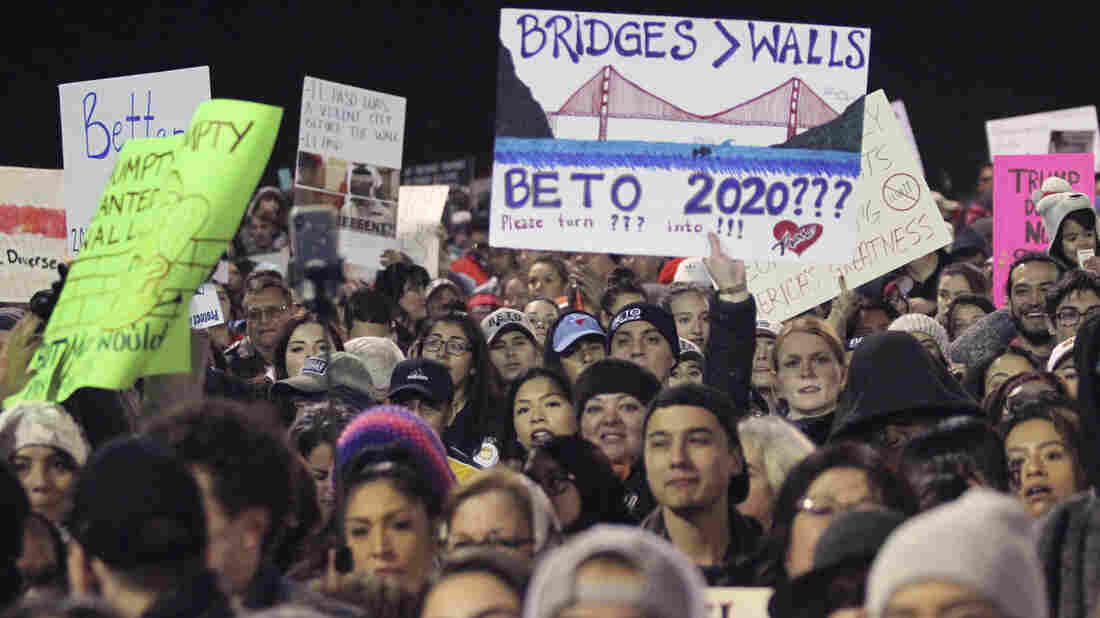 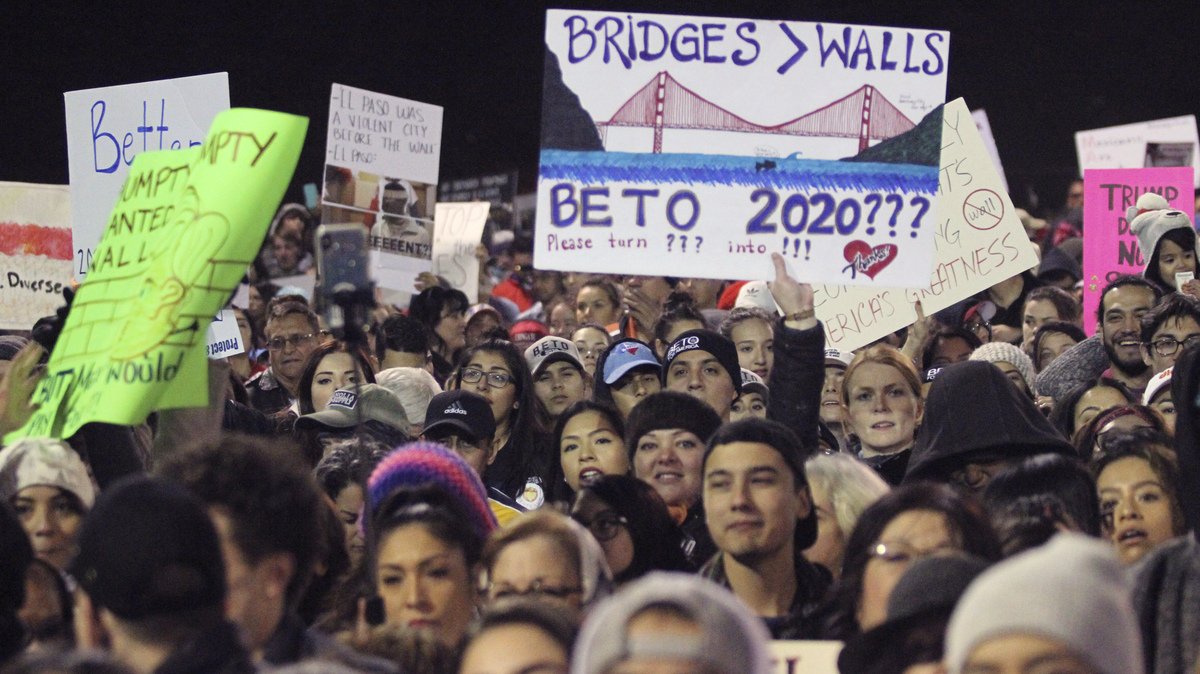 Trump, meanwhile, at his rally painted a much darker image about the possible influx of new immigrants across the border, who he has characterized as bringing drugs and crime. Instead, the president argued that people should be allowed into the country based on merit.

"The Democrat Party has never been more outside the mainstream. They're becoming the party of socialism, late-term abortion, open borders and crime," Trump said. He criticized Democrats for wanting to put a cap on the bed capacity at detention facilities, saying that would be "cutting loose dangerous criminals into our country."

"I will never sign a bill that forces the mass release of criminals into this country," Trump said.