Accessibility links
Opportunity Is Dead: NASA Declares End To Mars Rover's Mission NASA's six-wheeled rover landed on the red planet in January 2004 for what was billed as a 90-day mission. The plucky robot was still going until a dust storm on Mars last summer killed it. 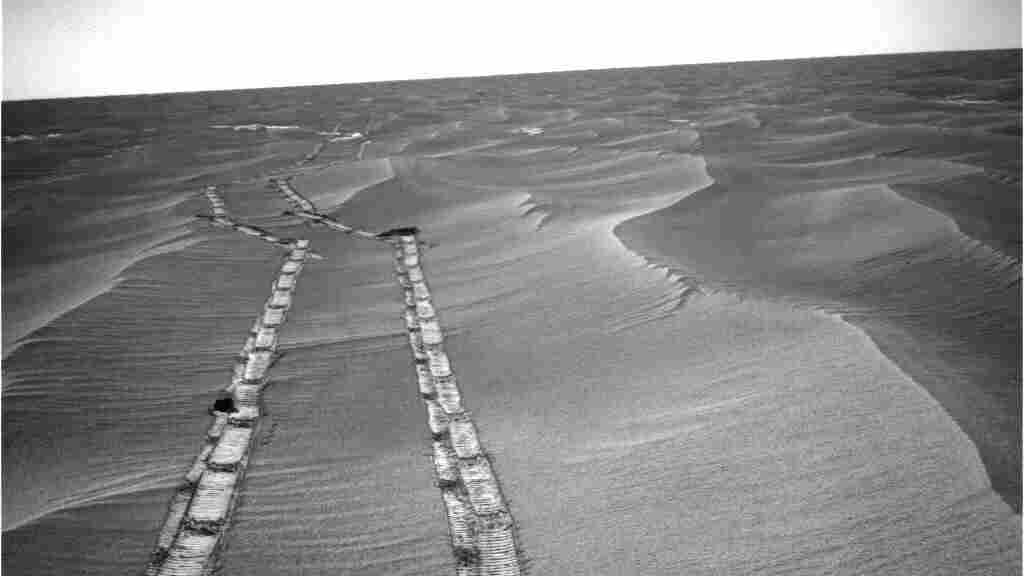 NASA's Opportunity rover used its navigation camera to capture this northward view of tracks in May 2010 during its long trek to Mars' Endeavour crater. NASA/JPL-Caltech hide caption 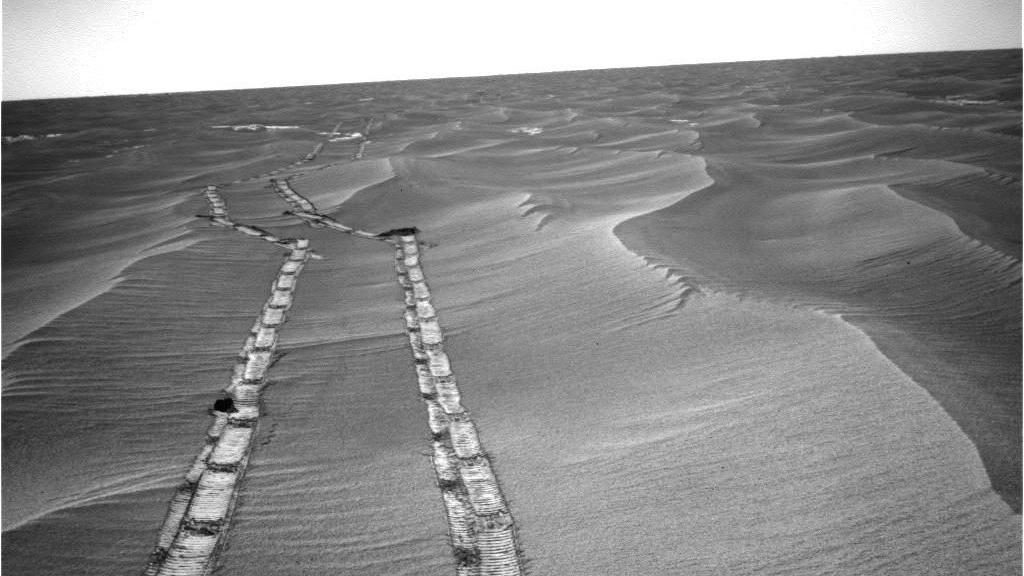 NASA's Opportunity rover used its navigation camera to capture this northward view of tracks in May 2010 during its long trek to Mars' Endeavour crater.

NASA has officially declared an end to the mission of the six-wheeled rover on Mars. Opportunity lost power in a dust storm last June, and all efforts to make contact have failed.

The plucky robot operated on the red planet for more than 14 years — an astonishing achievement, given that the mission was technically supposed to last only 90 days. The rover drove more than 25 miles, returned thousands of pictures and changed the way scientists think about Mars.

On landing day in January 2004, scientists were positively giddy about what they saw in the first pictures Opportunity sent after touching down at Meridiani Planum. 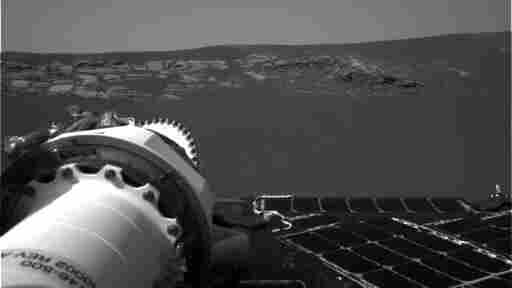 This image is among the first taken by NASA's Opportunity rover after landing on a Martian plain called Meridiani Planum in January 2004. NASA/JPL hide caption

"I will attempt no science analysis because it looks like nothing I've ever seen before in my life," rover principal investigator Steven W. Squyres said during a news conference at JPL shortly after landing. "We knew, going into this, at a fine scale the texture of Meridiani Planum was unlike almost anything else on Mars. As we had expected ..."

Squyres stopped midsentence to gawk at a new picture of the landing site that had just appeared on a monitor screen.

"Holy smokes," he exclaimed. "I'm sorry, I'm just blown away by this."

In the weeks, then months, then years following landing, Squyres appeared at numerous news conferences to talk about the rover's scientific discoveries. Asked last summer to share two of his favorites, he said, "OK, I'll give you two. The first was right at the beginning at the landing site."

That's when Opportunity found evidence that briny water once sloshed around on the surface of what is now a very dry planet.

The second "was years and years later [when] we got to the rim of a very ancient crater," Squyres said. The robot found evidence of what's called hydrothermal events in which hot water percolates through rocks and changes their mineral content.

But last summer, the planet that gave up so many of its secrets smothered the rover. 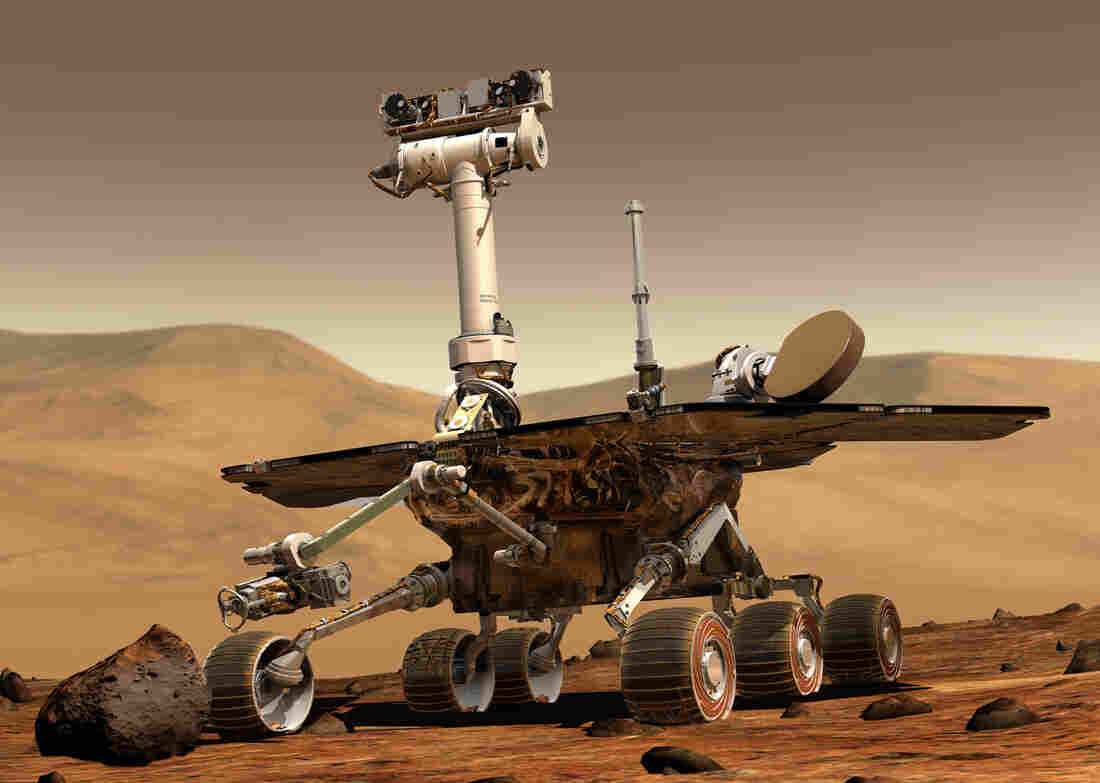 An artist's concept shows a NASA Mars exploration rover on the surface of Mars. The twin rovers Spirit and Opportunity were launched in 2003 and arrived at sites on Mars in January 2004. NASA/JPL-Caltech hide caption 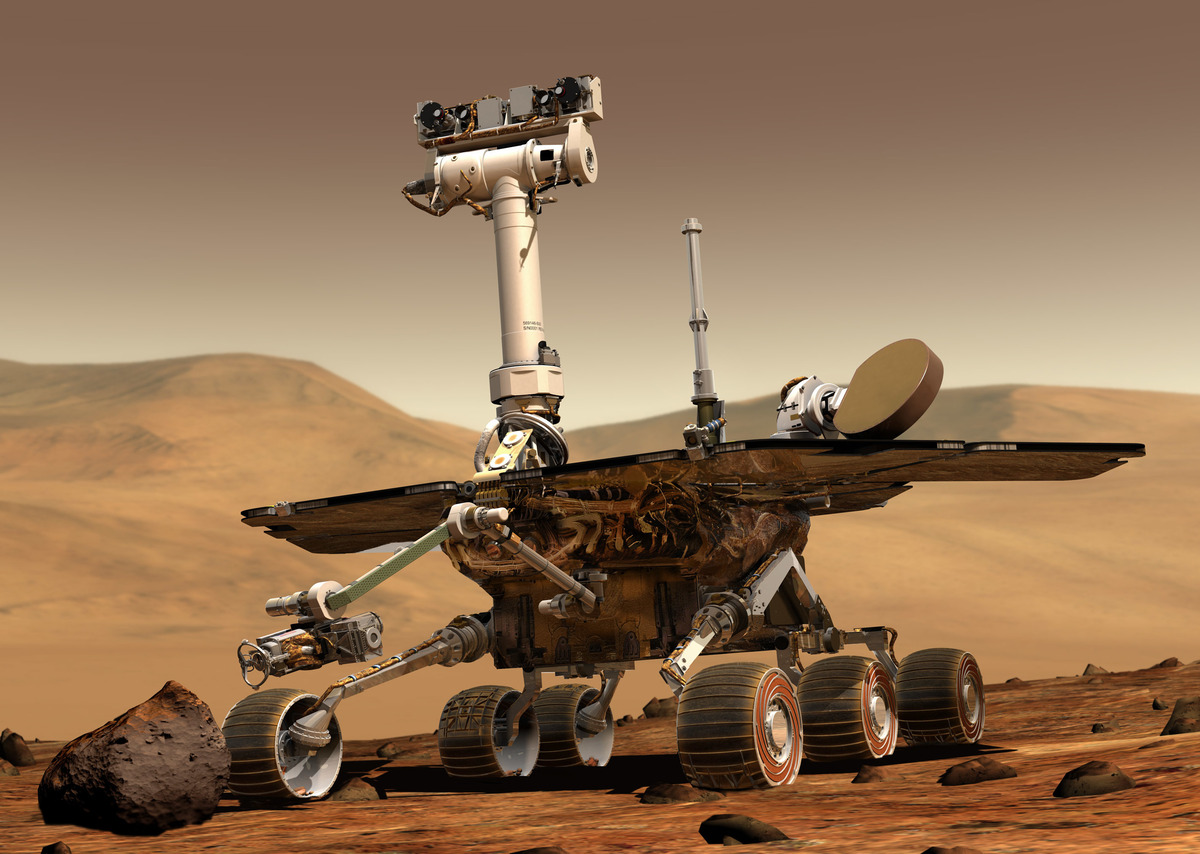 An artist's concept shows a NASA Mars exploration rover on the surface of Mars. The twin rovers Spirit and Opportunity were launched in 2003 and arrived at sites on Mars in January 2004.

On May 30, NASA's Mars Reconnaissance Orbiter spotted a dust storm heading toward Opportunity's location near the equator. Over the next few days, the enormous storm swirled over the entire planet, covering Opportunity's solar panels with dust.

"The storm is one of the most intense ever observed on the Red Planet. As of June 10, it covered more than 15.8 million square miles (41 million square kilometers) — about the area of North America and Russia combined," NASA said at the time. "It has blocked out so much sunlight, it has effectively turned day into night for Opportunity, which is located near the center of the storm, inside Mars' Perseverance Valley."

Her power dropped to a trickle, and she was last heard from on June 10.

(Opportunity's twin, a rover named Spirit that landed three weeks earlier on the other side of the planet, met a similar cold and dark fate. Spirit explored for more than five years before getting stuck in the sand, its solar-powered batteries draining until the robot fell silent.)

"I made the decision to declare a spacecraft emergency because there wasn't enough energy for the rover to sustain activities," John Callas, Opportunity's project manager, told NPR.

"Prior to this storm, the vehicle was in, actually, remarkably good health," Callas said.

Waiting For Opportunity To Get In Touch

Mission managers weren't exactly sure what was wrong with the rover. Opportunity survived a planetwide dust storm in 2007 — but this time, with so little power, the rover might not have been able to protect electronic instruments from damage during the cold Martian nights.

Instead of waiting for the rover to wake up on its own, managers have spent the past several months pinging Opportunity with commands. But she remained silent and still in Perseverance Valley.

On Tuesday, scientists at JPL announced that there would be one final attempt to ping the rover.

Keri Bean was among those who helped send that last radio signal. Losing Opportunity, she says, is like a death in the family.

Bean was in high school when she saw a documentary about Opportunity called Roving Mars. "I especially remember them showing the landing footage," she says. "And when they got the confirmation the spacecraft landed, they were all cheering, they were so excited. And I was really drawn to the idea of exploring and being so interested and caring about something that much."

Bean went to graduate school at Texas A&M University where she worked on the rover as a student and ultimately landed a job at JPL, where she joined the Opportunity mission team.

"Me, personally, it's been really hard because this is a project I've worked on for over a third of my life at this point," Bean says. "And so just to lose that all of a sudden is really tough. But at least it was Mars that killed her — it wasn't the rover failing or something else. It was Mars. And I feel like that's really the only appropriate death for her at this point."

NASA still has one rover operating on Mars. Curiosity landed in 2012 and is currently climbing up Mount Sharp, a 3-mile-high mound in the middle of Gale Crater. Curiosity is nuclear-powered, so dust storms don't interfere with its power supply.

The space agency plans to send another rover to Mars in 2020.