Accessibility links
Rare Black Leopard Seen In Kenya There have been lots of stories about the unique animal in central Kenya's Laikipia County. Now cameras have captured multiple high-quality photos and video.

Rare, Elusive Black Leopard Caught On Camera In The Wild

Rare, Elusive Black Leopard Caught On Camera In The Wild 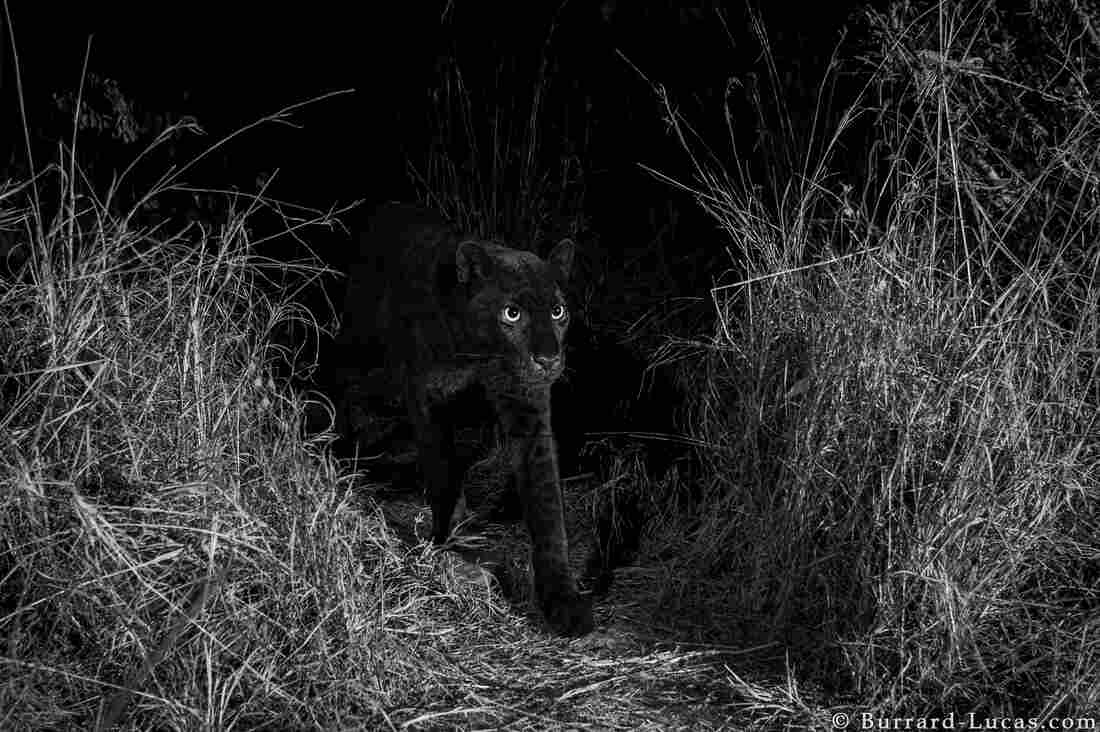 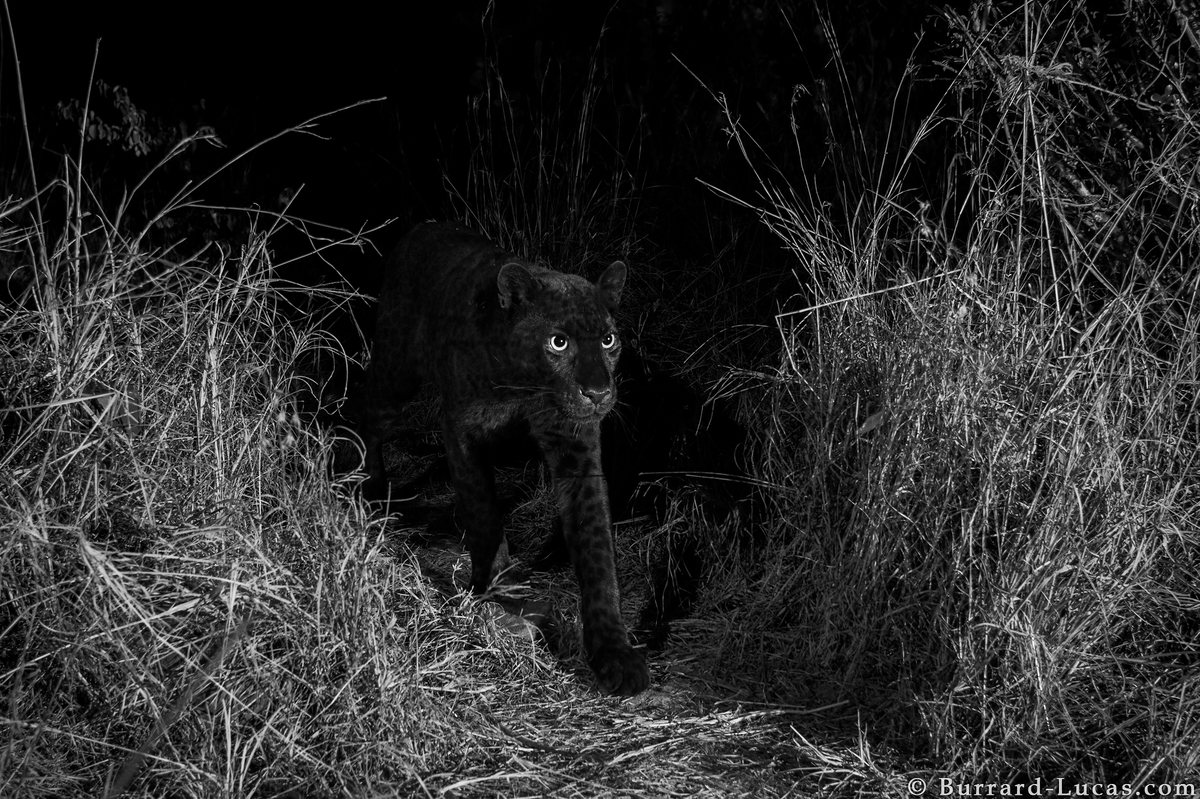 The elusive black leopard has been sighted.

In Kenya, the vast majority of leopards have a light coat with dark spots. A tiny minority of them have a genetic mutation called melanism that causes them to appear all black in the daylight. According to San Diego Zoo Global, the spots show up in infrared imagery at night.

There have been lots of stories about the unique animal in central Kenya's Laikipia County, the location of multiple recent sightings.

San Diego Zoo Global researchers captured footage of a black leopard there in early 2018 and published their research in late January 2019, in the African Journal of Ecology, in what is believed to be the first sighting since 1909 of the rare type of animal in Africa since 1909 published in scientific literature. Separately, wildlife photographer Will Burrard-Lucas captured high-quality photos of a black leopard there last month.

Nicholas Pilfold, a scientist working on the San Diego Zoo Global's leopard conservation program in the area, says that getting any leopard on camera is a challenge.

"They're a very elusive cat," he told NPR. "And then to get black leopards, wow, the first time I got that I was very, very happy, very surprised."

The team set up remote trail cameras that automatically switched on when they detected movement and filmed for 15 to 30 seconds. Eventually, they caught images of the rare cat prowling in footage published by the zoo:

Burrard-Lucas, the wildlife photographer, had also heard reports of black panther sightings in the area and traveled to Kenya to try to capture photos of his own.

"I have never seen a high-quality image of a wild black leopard come out of Africa," he said in a blog post, but then he heard about a sighting at Laikipia Wilderness Camp in Kenya. A local resident said she had seen one recently, and another pointed out fresh leopard tracks.

Burrard-Lucas used a series of Camtraptions camera traps, a system he devised, that included a wireless motion sensor and a high-quality camera.

"As I scrolled through the images on the back of the camera, I paused and peered at the photograph below in incomprehension... a pair of eyes surrounded by inky darkness... a black leopard!" he wrote in a blog post. "I couldn't believe it and it took a few days before it sank in that I had achieved my dream."

On another night, one of his cameras managed to capture the leopard in the light of a full moon, prowling through the darkness. 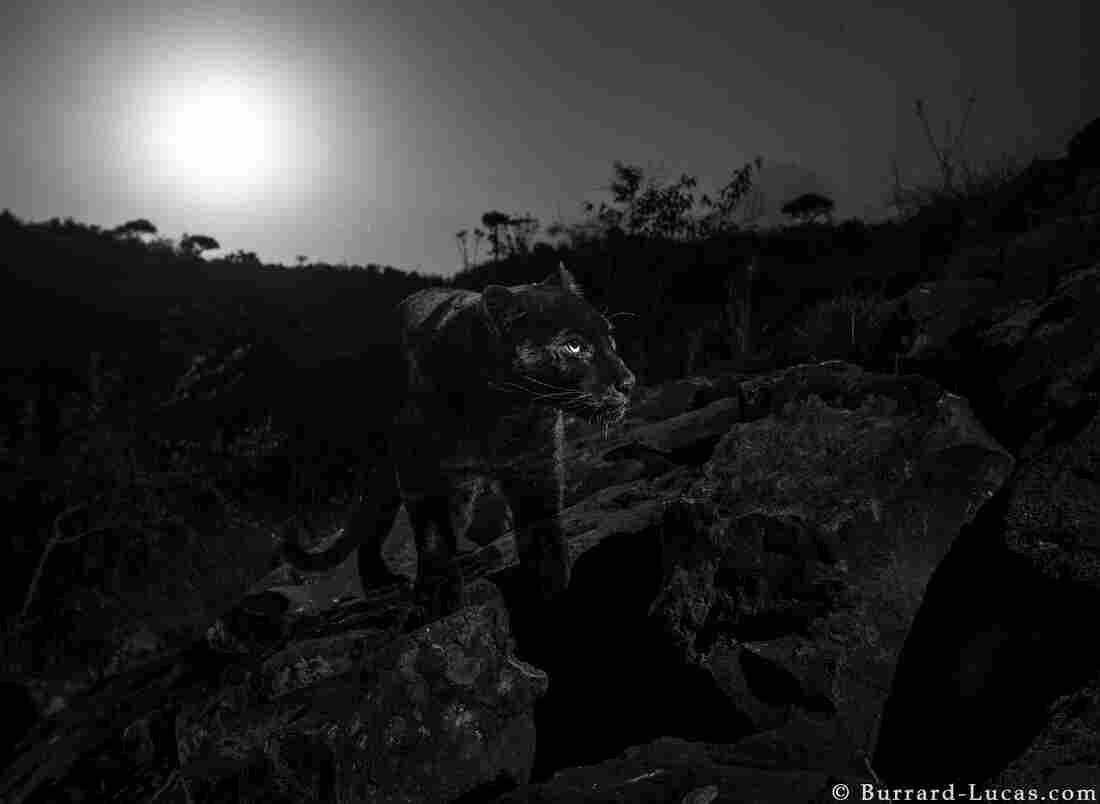 The leopard is melanistic, a rare genetic mutation that causes it to sometimes appear completely black. Will Burrard-Lucas/Burrard-Lucas Photography hide caption

"As far as I know, these are the first high-quality camera trap photographs of a wild melanistic leopard ever taken in Africa," Burrard-Lucas wrote.

Burrard-Lucas and Pilfold's team were working separately, but they believe they captured images of the same leopard.