Accessibility links
Toni Morrison's 'The Source Of Self-Regard' Speaks To Today's Social And Political Moment Though the essays, speeches, and meditations in Toni Morrison's new nonfiction collection were written over the course of four decades, virtually every entry feels strikingly relevant now. 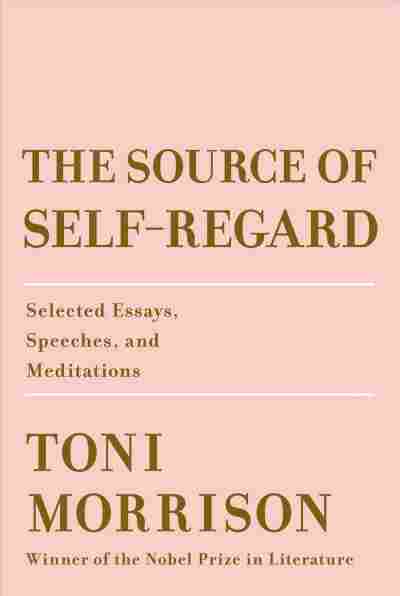 The Source of Self-Regard

Even though the essays, speeches, and meditations in Toni Morrison's most recent nonfiction collection were written over the course of four decades, The Source of Self-Regard speaks to today's social and political moment as directly as this morning's headlines.

Morrison turns her penetrating analysis on the mass movement of people across the globe, foreigners and foreignness, and what it means to be "exiled in the place one belongs." She takes on racism — in the media, society, and American literature — and examines how, step by deliberate step, nations move towards "its succubus twin fascism." Devotees should be happy to know that the Nobel laureate also delves into her own artistic process in addition to exploring the work of the painter Romare Bearden, theater director Peter Sellars, and writers ranging from Toni Cade Bambara to Chinua Achebe to Herman Melville. In short, you can expect virtually every entry in the collection, whether it was written in the 1970s or in this century, to feel strikingly relevant today.

Perhaps intentionally, the book's structure helps underscore the timelessness of its pieces since the work is arranged by theme rather than chronology. The first of three parts is "The Foreigner's Home," which concerns itself with the threats of globalization and our unhelpful compulsion to demonize and ostracize the "other." It opens with a moving prayer to those who died on Sept. 11 and, in its haunting power, is reminiscent of Morrison's fiction.

The remaining sections also begin with recognitions of the dead, and a tender, self-reflexive tribute to Martin Luther King Jr. introduces the interlude, "Black Matter(s)." The primary focus on the interlude is the historical and current role of Africanism, a term Morrison uses to refer to white Americans' "collective needs to allay internal fears and rationalize external exploitation... a fabricated brew of darkness, otherness, alarm, and desire."

A poignant eulogy to novelist and playwright James Baldwin opens the final part of the book, "God's Language." This section illuminates both Morrison's work and the art of others, addresses the inevitability of cross-genre inspiration, and examines the role of the artist in society. It should be noted, however, that the author's central themes are so connected that each spans the entirety of the collection.

Memorials of a sort may begin each of the book's sections, but Morrison ultimately is less concerned with acknowledging the dead than with presenting a call to action for the living. These are not frivolous pieces and Morrison has no interest in addressing mundane topics. As she puts it in "Hard, Lasting, and True," a 2005 lecture at the University of Miami, "I believe it is silly, not to say irresponsible, to concern myself with lipstick... when there is a plague in the land." Throughout the collection, just as in her fiction, Morrison tackles headfirst the weighty issues that have long troubled America's conscience. (Of course, with reports of children sleeping in cages on our southern border, one can certainly argue that the nation's conscience hasn't been troubled nearly enough.)

Some of the strongest entries in the collection challenge the seemingly eternal human compulsion to move towards separation rather than unity, to elevate superficial difference over shared humanity. Words from her 2009 convocation at Oberlin, "Home," reverberate to the present day, as she observes that "[p]orous borders are understood in some quarters to be areas of threat and certain chaos, and whether real or imagined, enforced separation is posited as the solution." Thanks to the breadth of the collection, it's easy to see how this concern has long preoccupied her. At a symposium in 1976, more than 30 years earlier, she argues that racism, sexism, and classicism are born of the same source — "a deplorable inability to project, to become the 'other,' to imagine her or him."

This "intellectual flaw," as Morrison characterizes it, is perhaps most evident in her 1990 lecture, "Black Matter(s)," included in the interlude of the same name. In all honesty, the entire section is profoundly insightful and includes provocative examinations of the black presence in American literature — and a fascinating consideration of Moby-Dick as an allegory for "whiteness idealized." Yet it is the title lecture itself that is particularly compelling as it explores how "the rights of man, an organizing principle upon which the nation was founded, was inevitably, and especially, yoked to Africanism."

Of course, to highlight every notable observation or intriguing thesis would be to write an entire, if smaller, book itself. There are few pages that don't contain sentences that invite repeated reading, because of their stimulating content, and often because of Morrison's trademark lyricism. Is it a collection worth reading? Undoubtedly.

If there are complaints to be made, they are few. For my part, I would have loved the inclusion of "Making America White Again," an essay that appeared in The New Yorker after the 2016 presidential election. I could also imagine that, for some, recurring refrains could have been culled from the collection. (Others, like me, will be less concerned about repetition and will simply appreciate the opportunity to identify trends and preoccupations in Morrison's work.)

That so much of the book is eerily timely doesn't mean that our only response is to mourn our meager progress over the past 40 years. Morrison is anything but hopeless. She reminds us, in "The Future of Time," that:

"[o]ur everyday lives may be laced with tragedy, glazed with frustration and want, but they are also capable of the fierce resistance to the dehumanization and trivialization that politico-cultural punditry and profit-driven media depend upon."

Take those words as encouragement. In various ways throughout the collection she calls on us to do what she knows, what we should all know, is possible: "To lessen suffering, to know the truth and tell it, to raise the bar of humane expectation."