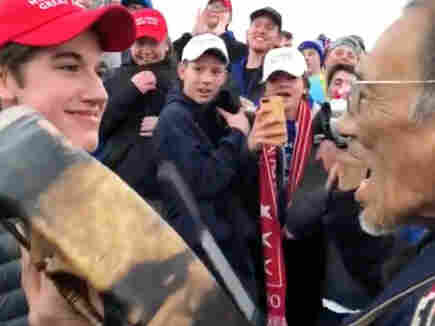 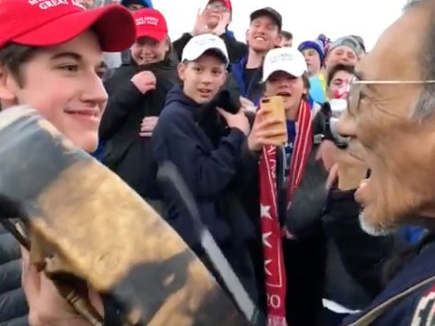 Nick Sandmann, a Covington Catholic High School student, stands before Native American activist Nathan Phillips at the Lincoln Memorial in January. An independent report found the students did not instigate the confrontation.

A private detective agency hired by the diocese that oversees Kentucky's Covington Catholic High School says there's no evidence that the school's students instigated a conflict with a Native American man near the steps of the Lincoln Memorial last month.

The boys, some of whom were wearing red "Make America Great Again" hats, were seen in a video shouting, chanting and grinning at a Native American man, Nathan Phillips. ("Make America great again" was President Trump's campaign slogan.) After the video went viral, the boys faced immediate condemnation from many who said they were intimidating Phillips. Now, a report by independent investigators retained by the Catholic school the boys attend has exonerated the students.

"Our students were placed in a situation that was at once bizarre and even threatening," Diocese of Covington Bishop Roger Foys said in a letter to parents this week. "Their reaction to the situation was, given the circumstances, expected and one might even say laudatory."

The firm hired by the diocese, Greater Cincinnati Investigation, concluded that students made no "offensive or racist statements" to either Phillips or a group of Black Hebrew Israelites and that they didn't perform a "Build the Wall" chant. Investigators said they came to these conclusions after interviewing over 40 students and more than a dozen faculty and parent chaperones, as well as reviewing footage from all major news networks as well as YouTube and Vimeo.

The lawyer for Nick Sandmann, the teenager in the red MAGA hat who responded to Phillips' chanting with an impenetrable smile, condemned the media for rushing to judgment. "Every member of the mainstream and social media mob who falsely attacked, disparaged, or threatened this 16-year-old boy should hang their heads in shame and be held fully accountable in a court of law for their wrongdoing," attorney Lin Wood told The New York Times. Wood has said that Phillips will be sued for "lies and false accusations" about Sandmann.

In a statement after the incident, Sandmann said that he didn't feel like he was blocking Phillips' path and that it was "clear" that Phillips "had singled me out for a confrontation." Phillips told NPR that the statement was "a young man trying to alter his story to make himself look good."

Investigators said they tried to interview Phillips at his residence in Ypsilanti, Mich., but over the course of six hours, he never appeared and he has not responded to their request for an interview. "Phillips' public interviews contain some inconsistencies, and we have not been able to resolve them or verify his comments due to our inability to contact him," they said in the report.

Native American advocates were critical of the report. "Maybe they didn't say overtly racist things, but the context of the incident needs to be analyzed," Dina Gilio-Whitaker, professor of American Indian studies at California State University at San Marcos, told The Washington Post. She called the report "unfortunate and disgusting" and said it "sidesteps problematic issues — such as the fact they were all wearing MAGA gear, which is, unfortunately, a visual cue."

"We have a history of people in MAGA gear attacking other people," she said.

Investigators said most of the students who wore MAGA hats bought them in Washington, around the time of the March for Life. Some chaperones reported that on past trips, some students had purchased "Hope" hats to support President Barack Obama. In any case, investigators said, the school has no policy banning political apparel on school-sponsored trips.

"The MAGA cap that Nick was wearing provides no legal excuse or justification for the politically motivated accusers," Wood told the Post. "Rather, it only confirms their bias and malice."

Investigators found that the kids did perform a "tomahawk chop" to the beat of Phillips' drum and "joined in" with his chanting but said that they could find "no evidence of offensive or racist statements by students to Mr. Phillips or members of his group."

The person who said on video that "it's not rape if you enjoy it" was not a student at Covington Catholic, the investigators also found.

Before the investigation, the diocese had said the boys could be expelled for their behavior. In his letter to parents, Bishop Roy said he was pleased that his "hope and expectation" that the boys would be exonerated "has been realized." The students, who had traveled to Washington to "march peacefully" for the anti-abortion rally, "could never have expected what they experienced on the steps of the Lincoln Memorial while waiting for the buses to take them home," Roy wrote. "Their stance there was surely a pro-life stance. I commend them."