Accessibility links
Journalist's Arrest In Philippines Sparks Demonstrations, Fears Of Wider Crackdown Maria Ressa, the CEO of the news outlet Rappler, which has been critical of President Rodrigo Duterte, was arrested earlier this week and charged with violating the country's cybercrime law. 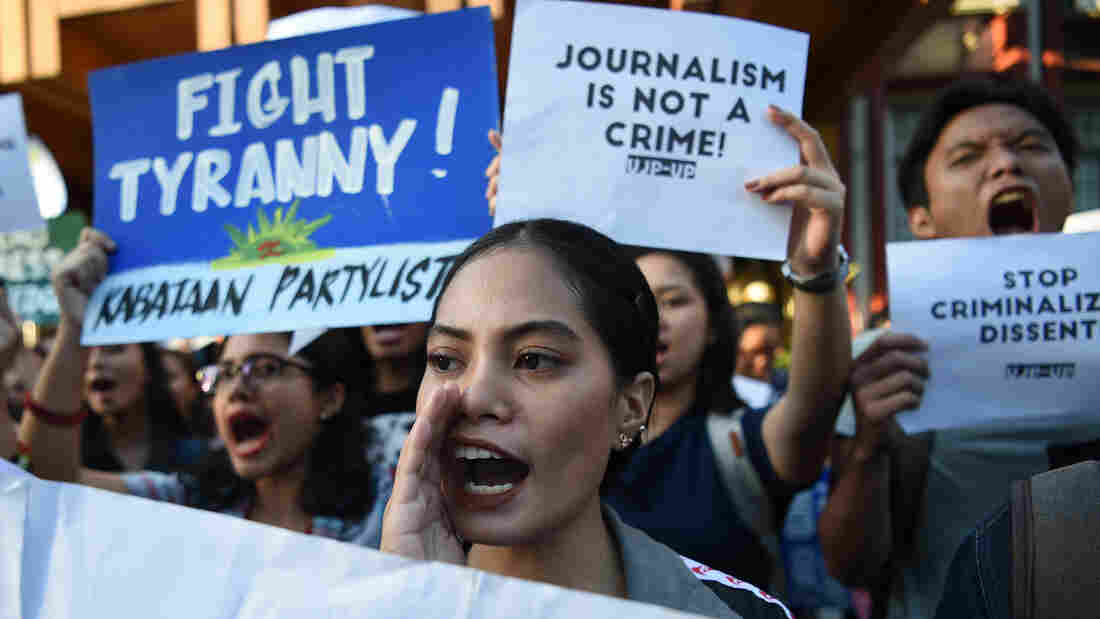 Students hold placards as they shout slogans during a protest at the state university in Manila, Philippines, on Thursday in support of Rappler CEO Maria Ressa, who was arrested a day earlier. Ted Aljibe/AFP/Getty Images hide caption 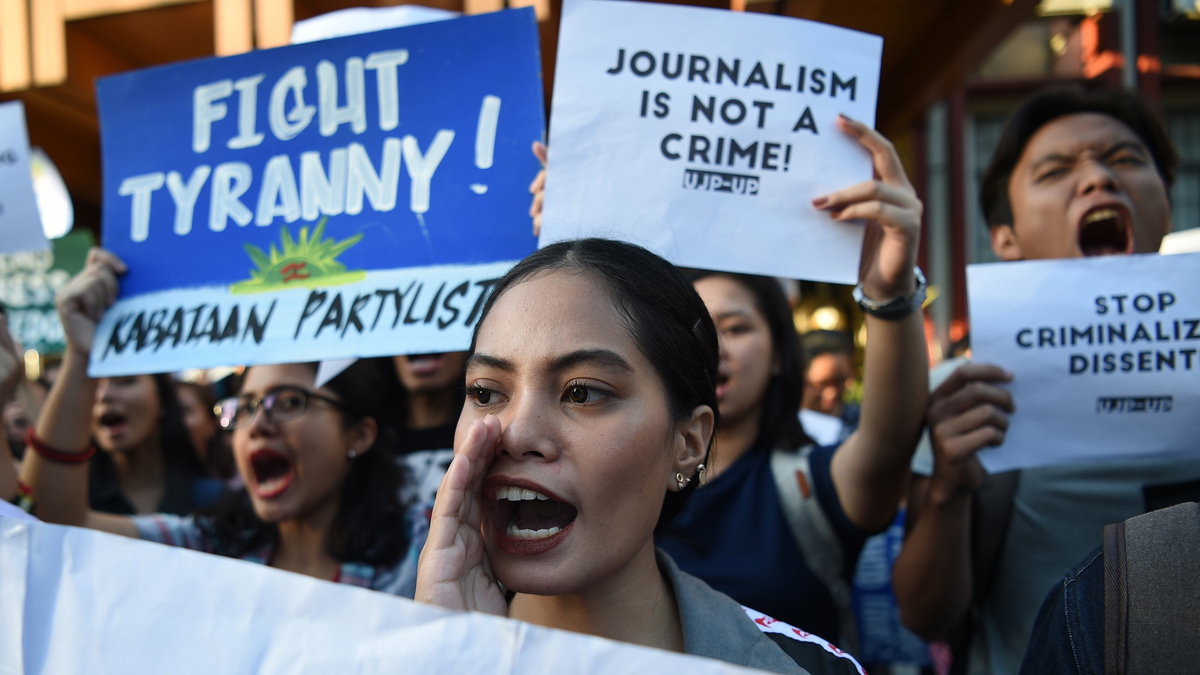 Students hold placards as they shout slogans during a protest at the state university in Manila, Philippines, on Thursday in support of Rappler CEO Maria Ressa, who was arrested a day earlier.

Press freedom advocates across Manila, Philippines, including students and some faculty at a handful of universities, have been rallying the past two days following the arrest of journalist Maria Ressa this week.

The award-winning journalist and outspoken critic of President Rodrigo Duterte's administration was arrested Wednesday on charges stemming from coverage by her online news website, Rappler, one of the Philippines' few independent news outlets.

Speaking with NPR, Ressa says that the media cannot be silent, because the rule of law is the "only thing that keeps a democracy together."

"Press freedom is not just about journalists. Press freedom is the foundation of all the rights of all Filipinos for the truth," she says. "We're in a battle for truth, and the first causality of the truth is the number of people killed in the drug war. This is death by a thousand cuts of Philippines' democracy." 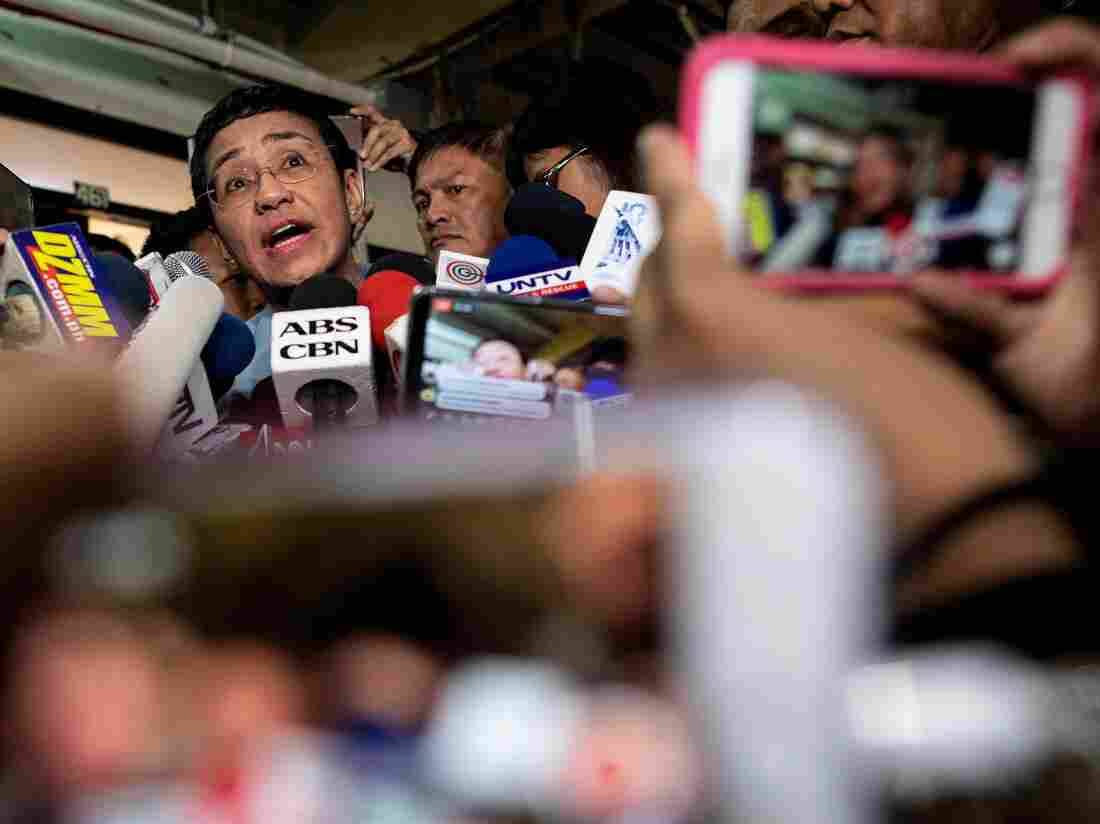 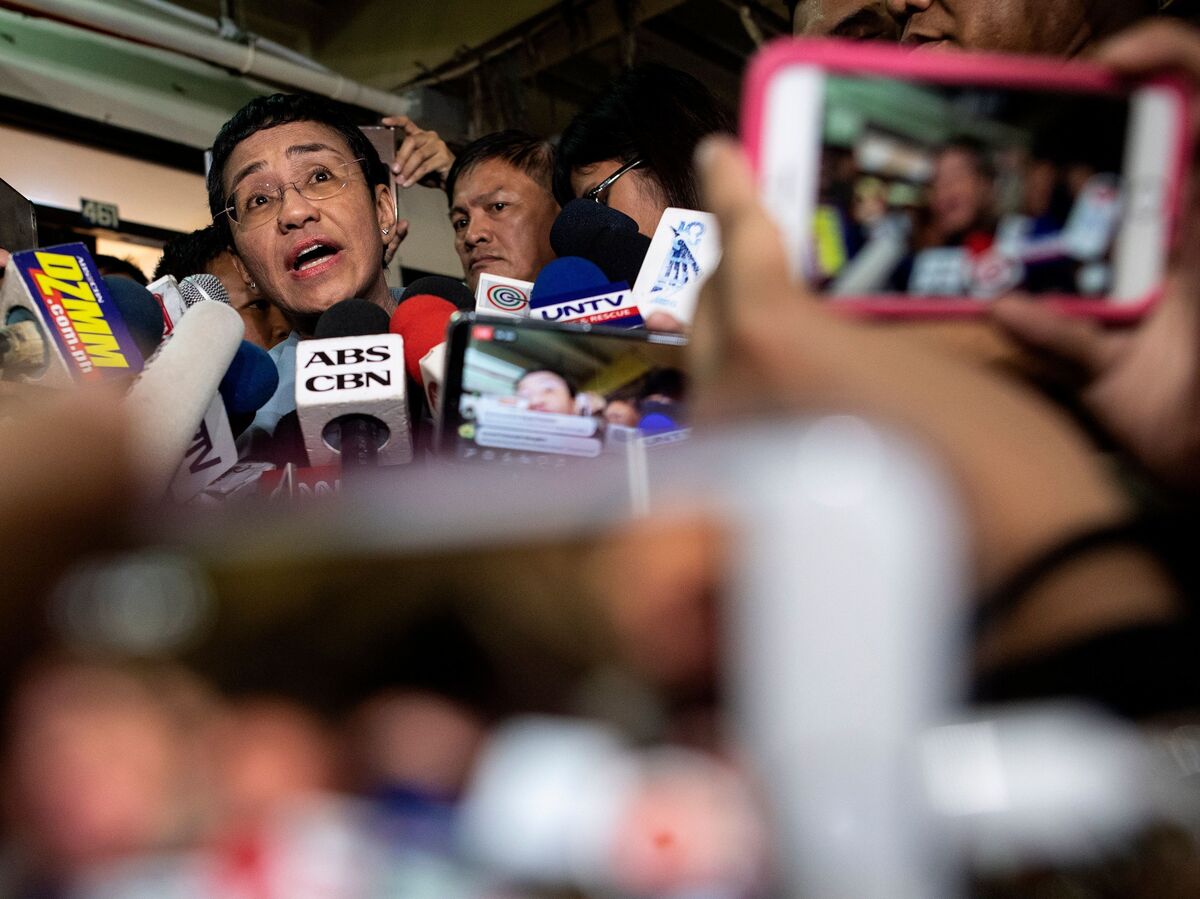 Philippine journalist Maria Ressa gives a statement after posting bail at a regional trial court in Manila on Thursday.

Ressa, a former CNN bureau chief, is a co-founder and the CEO of Rappler. She was served the warrant at her office and was charged with one count of cyberlibel, stemming from a story initially published seven years ago. Ressa spent the night at the headquarters of the National Bureau of Investigation and was released on bail the next day.

Outside the NBI building after her release, Ressa told reporters that her arrest was about two things: abuse of power and weaponization of the law.

"This isn't just about me, and it's not just about Rappler," she said. "The message that the government is sending is very clear. ... Be silent, or you're next. ... I am appealing to you not to be silent ... especially if you're next."

This was the sixth time that Ressa has posted bail in the past few months, but it was the first time she'd been formally arrested. Ressa was honored last year along with other prominent journalists as one of Time magazine's People of the Year. She and her news site have been a thorn in the side of Duterte since he took office in 2016, critically reporting on his administration and its deadly war on drugs.

Duterte's government has repeatedly tried to take Ressa and Rappler to court on charges ranging from alleged tax evasion to being "fully owned by Americans."

The latest cyberlibel charge against Ressa stems from a complaint by a local businessman, Wilfredo Keng, who says he was defamed by a Rappler article first published seven years ago and then republished two years later, according to NPR's Julie McCarthy.

In the article, Keng is linked to murder, human trafficking and drug smuggling. According to The Associated Press, Rappler claims to have used information cited in a 2002 intelligence report, but the news agency did not specify from which government agency the report originated.

Ressa's lawyers want the case thrown out, calling it politically motivated. The Philippines' Cybercrime Prevention Act of 2012 was passed in September of that year. The story in question was first published in May 2012. The case against Ressa rests on the fact that the law was updated in February 2014 and the article about the allegedly defamed businessman was updated that same year.

One of Ressa's lawyers, JJ Disini, told CNN that the update was "merely a punctuation change."

"If the libel had been committed way back in 2012, a change in punctuation couldn't have republished that libel," Disini added.

Ressa's arrest is widely seen by both domestic and international media watchdog and human rights groups as a broadening of the Duterte administration's crackdown on press freedoms in the Philippines.

In a statement, the National Union of Journalists of the Philippines called Ressa's arrest "clearly manipulated" and part of the "administration's obsession to shut Rappler down and intimidate the rest of the independent Philippine media."

Butch Olano, Amnesty International's sector director in the Philippines, called the charges "trumped up" and called for Philippine authorities to end the harassment.

"In a country where justice takes years to obtain, we see the charges against [Ressa] being railroaded and the law being used to relentlessly intimidate and harass journalists for doing their jobs as truth-tellers," Olano said in a statement.

The U.S. State Department spoke out in support of the arrested journalist.

"We hope these charges will be resolved quickly, in a way that fully respects the freedom of the press, allows Ms. Ressa and Rappler to continue to operate freely, and is consistent with the Philippines' tradition of a free and independent press," a spokesman said, according to the news wires.

Duterte says he had nothing to do with Ressa's arrest. He also said he didn't even know the businessman who brought the case against her.

Rappler is not the only news organization Duterte has gone after, reports McCarthy. He has also threatened to pull the licenses of other mainstream outlets in the Philippines this year, she says.

A previous version of this story incorrectly said Maria Ressa's arraignment was expected for March 6. The correct date is March 1. And a reference to Wilfredo Keng misspelled his last name as Ken.