Accessibility links
Kashmir Bombing Leads To Renewed Tensions Between India and Pakistan The government says it is taking steps to isolate Pakistan, which it blames for Thursday's fatal bombing. Pakistan calls the violence a result of "brutalities of Indian occupied forces in Kashmir." 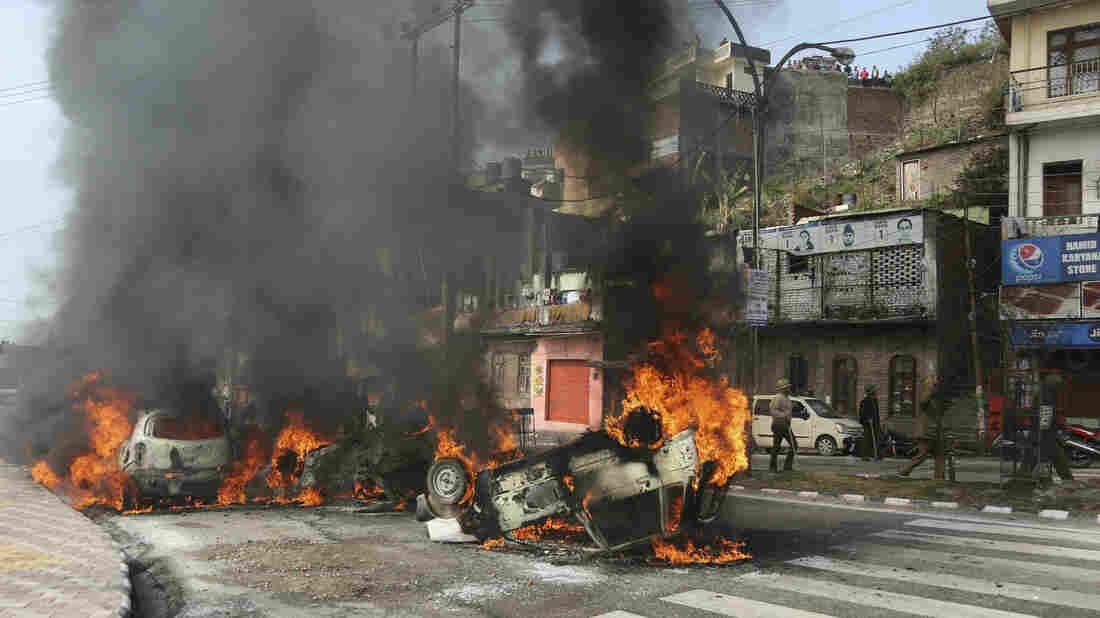 A mob in India set fire to vehicles on Friday, in protest of Thursday's attack on a paramilitary convoy in Kashmir. Channi Anand/AP hide caption 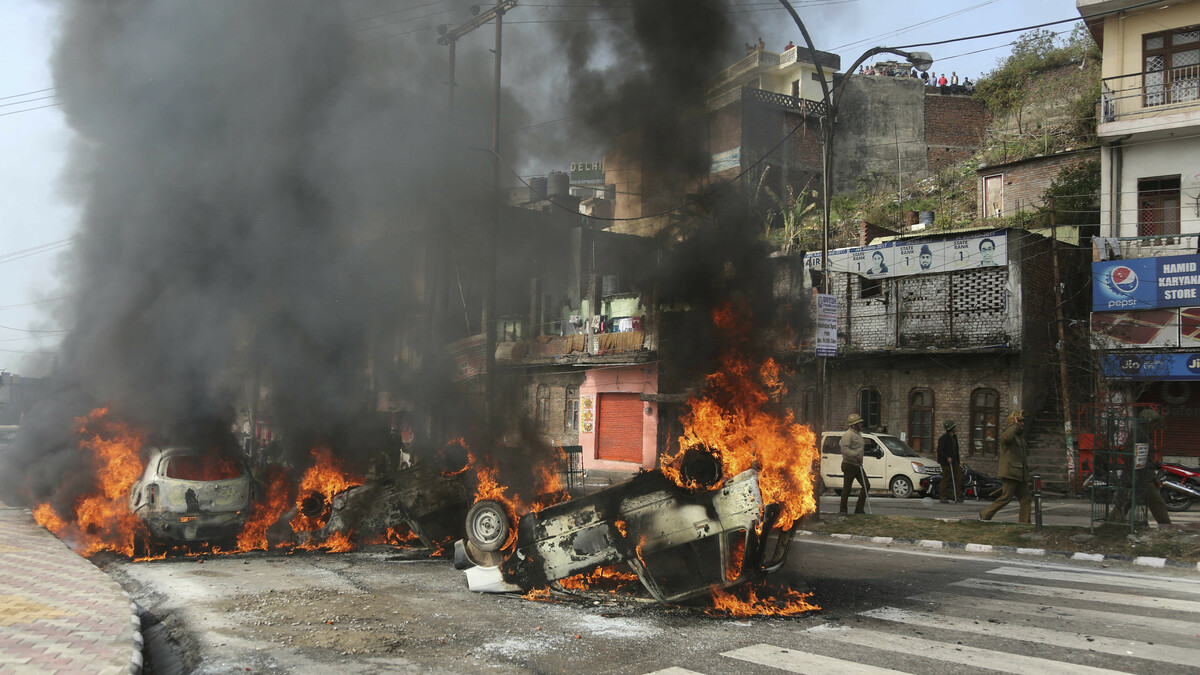 A mob in India set fire to vehicles on Friday, in protest of Thursday's attack on a paramilitary convoy in Kashmir.

Indian Prime Minister Narendra Modi has promised a "befitting reply" for perpetrators and their supporters in the wake of a bombing in Kashmir described as the deadliest in three decades that killed at least 40 Indian police troops and wounded nearly 20 more.

In the attack on Thursday on the outskirts of Srinagar, the capital of Indian-administered Kashmir, a suicide bomber rammed a vehicle with explosives into caravan carrying paramilitary troopers.

Pakistani-based militant group Jaish-e-Mohammed, or JEM, a U.S.-designated terrorist group, claimed responsibility for the act. The bomber himself was a local Kashmiri, identified in the media as Adil Ahmad Dar.

The bodies of victims were transported to New Delhi and saluted by Modi on Friday. That morning, a 12-member team from the country's National Investigation Agency headed toward Pulwama, the site of the bombing, according to India's NDTV.

Himalayan Kashmir has long been disputed, with both India and Pakistan claiming the Muslim-majority region. Following multiple wars over Kashmir, an uneasy truce prevails along an unofficial demarcation known as the Line of Control. Even so, thousands have been killed in a low-level insurgency that New Delhi blames Islamabad for fueling.

The most recent attack has caused tensions between the rival nuclear powers to quickly flare up once again.

India's Ministry of External Affairs blamed Pakistan for supporting militants in the area – including JEM's founder, Masood Azhar, who has "full freedom by [the] Government of Pakistan to operate and expand his terror infrastructure."

Since the bombing, India has recalled its envoy to Islamabad. An Indian government official tells NPR the high commissioner to Pakistan was "called back for consultations."

Authorities have also summoned the Pakistani ambassador in New Delhi and demanded that his government take "immediate and verifiable action" against the group claiming responsibility for the bombing. Meanwhile, Indian Finance Minister Arun Jaitley told reporters that the government is taking all possible measures to ensure the "complete isolation" of Pakistan from the international community.

Pakistan's Ministry of Foreign Affairs condemned Thursday's violence and denied involvement. "We strongly reject any insinuation by elements in [the] Indian government and media circles that seek to link the attack to [the] State of Pakistan without investigations," ministry spokesperson Mohammad Faisal said.

A senior leader of Pakistan's ruling party said the bombing was the result of "brutalities of Indian occupied forces in Kashmir," and that India's allegations were part of a political campaign as the country's general elections near, according to The Associated Press.

For decades, Washington has maintained a delicate balancing act in South Asia, relying on cooperation from Pakistan to crack down on terrorism while trying to engage more with an economically emergent India.

The U.S. embassy in India has called on Pakistan to stop supporting terrorist groups that operate on its soil. "This attack only strengthens our resolve to bolster counterterrorism cooperation and coordination between the United States and India," the embassy said.

But Moeed Yusuf, associate vice president at the United States Institute of Peace's Asia Center, tells NPR from Islamabad that India will "most likely end up frustrated" with the United States. "The U.S. and Pakistan are working too closely on finding a solution in Afghanistan for the U.S. to come down hard on Pakistan," he says.

Rhetoric on both sides will be ratcheted up, he says, but military escalation is unlikely for the nuclear-armed neighbors. "India risks being counterattacked, and if it does, in a nuclear environment, you're going to have the world descend upon India and Pakistan to push them to de-escalate tensions."

As for Adil Ahmad Dar, Thursday's alleged suicide bomber, he appears to have nursed resentment for troops in the region.

"He was beaten by Indian troops a few years back when he was returning from school," his mother, Fahmeeda Dar, told Reuters. "This led to anger in him against Indian troops."

She said one day in March 2018, her son didn't come back from work. The family stopped searching for him after three months, she said. "Finally we gave up efforts to bring him back home."