Accessibility links
Book Review: 'Eugene V. Debs: A Graphic Biography' Turn-of-the-last-century labor leader Eugene V. Debs lead an interesting life — but this graphic biography misses plenty of opportunities to render the most interesting parts of it on the page.

'Eugene V. Debs' Resurrects A Stubborn Question: Why Is Labor History So Boring?

'Eugene V. Debs' Resurrects A Stubborn Question: Why Is Labor History So Boring? 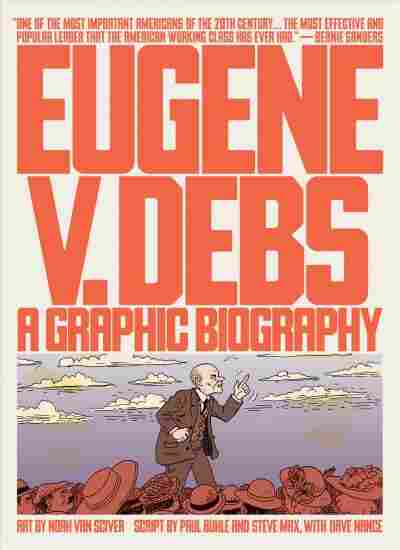 Why is labor history so boring? Left-leaning intellectuals have worried at this question for decades. Back in 1983, Irving Howe suggested that the field's notorious leadenness stems from a deep-seated attraction to ideas over people. "The Marxist mind finds itself drawn, with an almost punitive willfulness, to such abstractions as 'social forces,' 'political positions,' and 'relations of production,'" he wrote in a New York Review of Books piece about turn-of-the-century labor leader Eugene V. Debs. "Before these formidable categories, the actual figures of history tend to fade." Fortuitously, Howe added, a new wave of historians was striving to inject some life into the genre.

The struggle continues today. No one reading Eugene V. Debs: A Graphic Biography could doubt that authors Paul Buhle and Steve Max have accessibility in mind. Both are powerhouses of the left, so it's no wonder they're acutely aware of the movement's people problem. Max helped found Students for a Democratic Society and has worked with numerous organizations including the Democratic Socialists of America. Buhle literally wrote the book on the movement, with the Encyclopedia of the American Left. Over three decades he's also authored and edited dozens of volumes on left-wing politics, theory and people, several of them — like 2017's well-received Johnny Appleseed — graphic novels.

Unfortunately, in this case the authors' decision to illustrate Debs' life seems driven less by an appreciation of the artistic possibilities as by a hope of attracting a spectrum of readers. Buhle and Max seem to see comic art as a way to dress up what they're really interested in — and what they're really interested in is exactly what Howe mocked back in 1983. Throughout this biography, men at podiums spout ideological manifestoes and brave, interchangeable workers shake their fists at police. The authors even intersperse the graphical parts of the book with chunks of written narrative, as if they simply can't trust the drawings to convey meaning on their own.

It's hard to know how much artist Noah Van Sciver had to do with this book's shortcomings. Would any artist, much less one as gifted and experienced as Sciver, repeatedly choose to illustrate the most boring parts of anecdotes while describing the interesting parts in words? Whether it was Sciver's decision or the authors', that's what this book does. "The deaths and injuries caused by poor equipment and long hours made even skilled work on the railroads dangerous," notes one caption. But instead of some terrible accident, the panel merely depicts several men (one missing a leg) standing with their shovels. It may well have been copied straight from a period photograph. Elsewhere Sciver copies old newspaper cartoons, and once — as if to show how little they value their artist — Buhle and Max even include one of those cartoons, unaltered.

Unfortunately, in this case the authors' decision to illustrate Debs' life seems driven less by an appreciation of the artistic possibilities as by a hope of attracting a spectrum of readers.

It's an unwise decision. That drawing (apparently by caricaturist William Allen Rogers) is elegant in a way Sciver's work is not, and it casts Sciver in a bad light. Sciver draws with a looseness that can seem sloppy, especially when he's stuck producing page after aforementioned page of men at podiums spouting ideological manifestoes. He does better with strikes and battles, but these scenes are too few and too cramped. Meanwhile, half a page is given to Debs sitting on the porch of a sanitarium, explaining that he's too sick to give speeches.

Debs' poor health is a constant theme, unsurprisingly. A history of illness is a useful element in a hagiography — which this undoubtedly is. Its hero is miraculously free of inner conflicts and bad impulses. Buhle and Max seem to think you make someone heroic by scrubbing them clean of flaws and having them deliver stirring oratory, so poor Sciver had to copy out line upon line of speeches. There's even a hand-drawn chart comparing the 1932 Socialist platform with programs adopted by the Roosevelt administration.

It's hard to know what makes Marxists so much more interested in ideas than people — or, for that matter, in words over art. In this case, both proclivities are fatal. 35 years after Howe pondered the boredom problem, it remains as formidable as ever.