Accessibility links
Book Revew: 'The Haunting Of Tram Car 015' By P. Djèlí Clark P. Djèlí Clark's novella about about two supernatural investigators on the trail of a malign spirit in a magical alternate Cairo packs wonderful characters into a thoughtfully-built world. 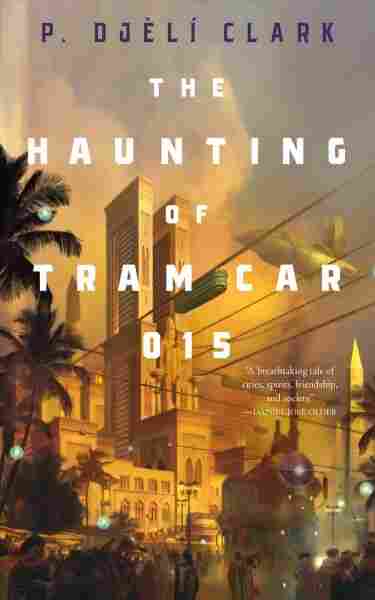 The Haunting of Tram Car 015

This novella is perfect and I loved it and you should read it.

In 1879, Egypt overthrew British rule with the help of a sudden influx of djinn; now, in 1912, Cairo's modernity is a mixture of magic and technology. Trams are powered by djinn-made intelligence and overseen by extremely mundane bureaucracy, and automata called "boilerplate eunuchs" with varying degrees of sentience work for and alongside humans. Even more remarkably, women are on the cusp of gaining the right to vote.

Against this backdrop, agents Hamed Nasr and Onsi Youssef represent the Ministry of Alchemy, Enchantments, and Supernatural Entities, investigating untoward magical occurrences and abuses. When the Superintendent of Tram Safety and Maintenance calls them in to deal with the titular haunted tram car, they're both bemused – but taking the case leads them on a merry chase through their city and alternate approaches to magic and philosophy.

How to explain how much I loved this? Usually fantasies in Arabic-speaking settings are a hard sell for me, as even the competently done ones throw me out of the story with well-intentioned attempts to evoke atmosphere. All it takes is someone writing "The El-Something" – which translates to "The the-something" — and the record of my reading brain skips and stutters, and I'm suddenly very firmly on the outside of something trying to invite me in. It's not unlike a friend asking me into their home and, in a gesture of hospitality, covering everything in carpets and camels and sand while playing the opening song from Disney's Aladdin in order to put me at ease.

This novella is perfect and I loved it and you should read it.

But this book! This book made me feel at home even though I've never been to Egypt. The cadences of the speech were there, Arabic words where they should be in a sentence to denote emphasis without straying into empty exotic flourish ("misguided men who label what we do some baladi custom or even haram," says Sheikha Nadiyaa, and I shouted with joy). Hamed and Onsi are pure delight — Hamed's slightly sulky point of view ripe for puncturing with new information, which eager, earnest and well-read Onsi readily supplies. This is less a story about a haunted tram car than a vivid, loving imagining of what a successfully decolonized Middle-East and North Africa could look like, with people looking at each other and seeing each other and their differences without the interfering, distorting lenses of whiteness and imperialism.

And the women! For all that the main characters are men, the gaze that encounters several different, vivacious female characters is an awed and loving one, and conversations about gender feel grounded in character and richly effective. The work women are doing together to obtain suffrage is deeply felt and wonderful, and I was frequently overwhelmed by how much joy the reading was bringing me.

The Haunting of Tram Car 015 is a zippy, wonderful romp, and it's made me want to seek out everything P. Djèlí Clark has written in this setting (there's a novelette on Tor.com as well, "A Dead Djinn in Cairo," from 2016). I'm so grateful for how happy it made me, how kind it is, and how loving. I deeply hope to see novel-length works in this world.