Accessibility links
'Birds Of Passage,' A Drug War Film About Human Impact On The Wayúu In Colombia Colombia's submission to the Oscars this year addresses the beginnings of the drug trade in rural Columbia — and how it shattered the traditions and families of the indigenous Wayúu people. 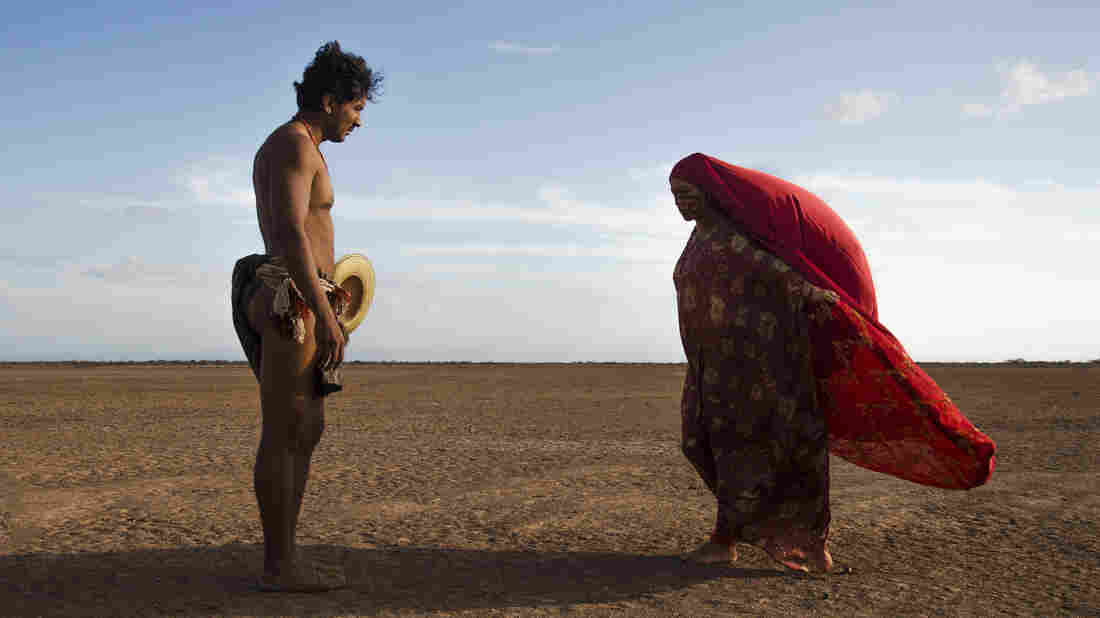 The courtship ritual between Rapayet (José Acosta) and Zaida (Natalia Reyes) sets a tone for Birds of Passage that this is no ordinary organized-crime drama. The Orchard hide caption 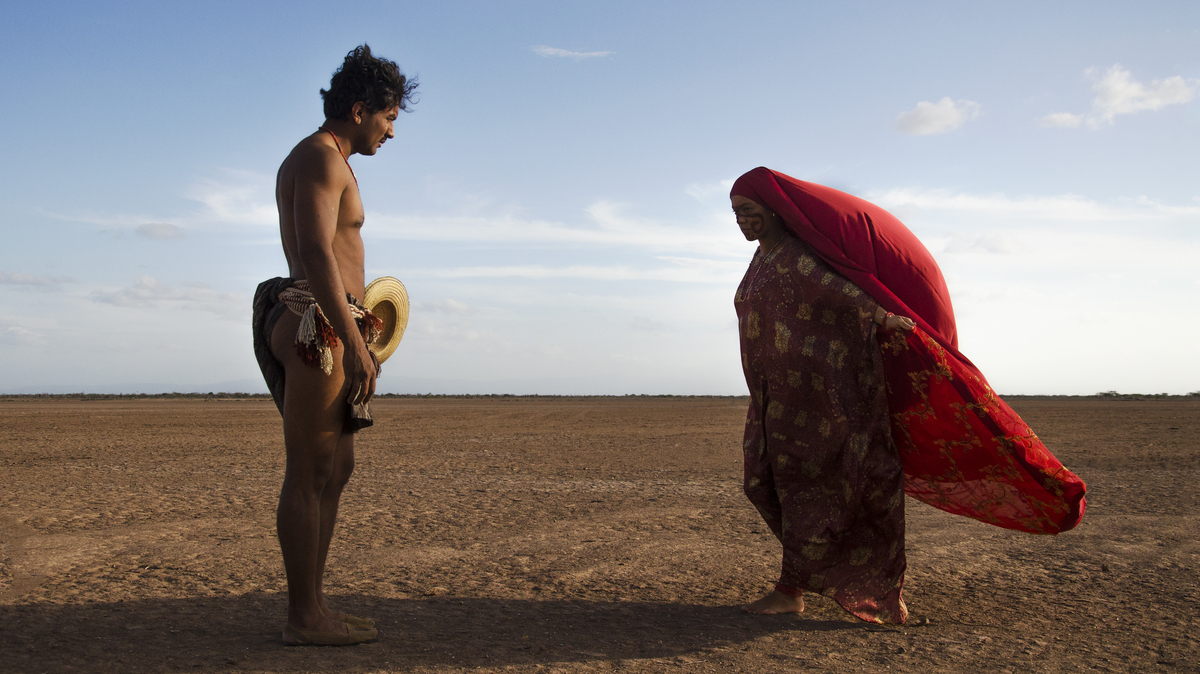 The courtship ritual between Rapayet (José Acosta) and Zaida (Natalia Reyes) sets a tone for Birds of Passage that this is no ordinary organized-crime drama.

In a hypnotic opening dance between two would-be lovers, the new film Birds of Passage immediately establishes that it is in no way a typical Colombian drug-war epic.

A young woman named Zaida, wearing a billowing red dress that stretches to resemble wings, is engaged in an elaborate courtship ritual with a suitor named Rapayet. As a crowd looks on in a tiny village, they charge toward each other, exchanging glances, dancing a sort of ballet. The scene is set against a vast, arid landscape in one of the most remote regions of northern Colombia, and among one of its most rarely seen indigenous communities known as the Wayúu.

Film critic Monica Castillo says that U.S. films depicting Colombia's devastating drug war tend to focus on the high-stakes world of narcotrafficking — on powerful gangsters like Pablo Escobar. These films and television series themselves traffic in sex, drugs and tropical heat. It is precisely this kind of gangster movie that Oscar-nominated filmmakers Ciro Guerra and Cristina Gallego wanted to subvert.

Birds of Passage is set in and told from the perspective of the deeply insular and traditional Wayúu community of Colombia's La Guajira region. Culture writer and film critic Manuel Betancourt, who was raised in Bogotá, says their world is so remote that it is as unfamiliar to most Colombians as it is to an international audience.

"They are a very specific group ... that really were never colonized by the Spanish, and that's different from many of the other indigenous communities that are alive with us in Colombia," Betancourt says. "The Wayúu maintained a level of insularity that really protected all those traditions. ... You're really seeing a community intact that has not been tainted, and the movie tracks when they're coming to terms with the modernity that's encroaching around them, and the history that's about to explode."

For filmmakers Guerra and Gallego, the drug war started a process that devastated the fragile cultures of indigenous communities. The booming demand for marijuana created a culture defined by greed and individual success, which fundamentally challenged the values and spiritual beliefs of tight-knit communities like the Wayúu.

In the film, Rapayet is desperate to raise money for the dowry to marry Zaida, and begins helping a friend supply American Peace Corps volunteers with marijuana. It grows into a booming family business — soon, there are planes flying in and out of the desert filled with drugs.

Amid the mushrooming riches, it is the women in the film who sense that something is wrong. The Wayúu are a matrilineal society, and in dream sequences and natural omens, only the women foretell the impending chaos.

One of the key omens are the birds of the film's title, which often appear on screen, silently walking through a room or landing on a branch in hypnotic, unexplained moments.

"The Wayúu have a strong relationship with birds and what they symbolize," Gallego says. "When a certain bird appears, it's bringing news, certain omens. They're the messengers of what's to come. ... We wanted to speak also to the arrival of the planes, because they are birds made of metal ... and also, in the '50s in Colombia, pajaros [birds] were used to refer to people with guns, people who brought violence with them."

The film might be described as a blend of a classical Greek tragedy of a family torn apart and a Latin American magical realist novel. Guerra and Gallego say the great master of Colombian literature, Gabriel García Márquez, was deeply influenced by Wayúu traditions — and that they are indebted to his legacy.

"When we started working on this world, we realized that the code of magical realism — and specifically of the world of One Hundred Years of Solitude — was written in the 'key' of Wayúu, because García Márquez was educated by Wayúu," Gallego says.

The novel became a guiding light to the filmmakers. They say that García Márquez was wrestling with many of the same questions about cultural identity and progress.

"[One Hundred Years of Solitude] also has to do with the arrival of modernity, and the arrival of the 20th century and all its transformations, in a place that, in some ways, is outside the laws of the modern world," Guerra says. "We thought the inspiration that surges through the novel was fitting for the story we wanted to tell."

The Strange And Intoxicating 'Embrace Of The Serpent'

Birds of Passage premiered at last year's Cannes Film Festival, and was Colombia's official entry to this year's Oscars. Guerra and Gallego's previous film Embrace of the Serpent, which Guerra directed and Gallego produced, was also set in one of Colombia's indigenous communities (this one deep in the Amazon jungle). It was a commercial and critical success, and was one of the nominees for the best foreign language Oscar.

The filmmakers are drawn to threatened traditions, but they are themselves at the forefront of a Latin American new wave. Film critic Manuel Betancourt says theirs is a deliberate project to widen the lens of Latin American cinema to indigenous voices.

"It's a choice to go to the Amazon or La Guajira, wanting to move away from the urban centers that dominate Latin American and Colombian cinema in general," Betancourt says. "It speaks to the kind of cinema they want to create, but also to the jobs they want to create for different communities, the types of stories they want to offer the world ... it seems very intentional and I love that about their work."

For Birds of Passage, Gallego says 30 percent of the crew came from the Wayúu community: "They were constantly correcting us on how we represented them appropriately," she says. It was always welcome, she says, because the collaboration as equal partners was key to avoiding the traditional colonial gaze of the outsider looking in.

"When we talk about cinema about the indigenous community ... we're often thinking about a type of distant ethnographic approximation, one that doesn't identify with the community, but rather, exotifies it," Guerra says. "For us what's been interesting with these last films was getting close to these communities and telling the story from within ... generating relatability and emotion in a way that is interesting for an audience that isn't used to seeing these kinds of communities on the big screen. They can identify with them, they can be moved with them. And the cinema has that power to generate that empathy — that connection."