Accessibility links
The Democratic Party's Long Shift To The Left On Immigration The Democratic Party is largely unified around the value of immigrants and against President Trump's policies, far from labor concerns and the party's law and order agenda of the 1990's. 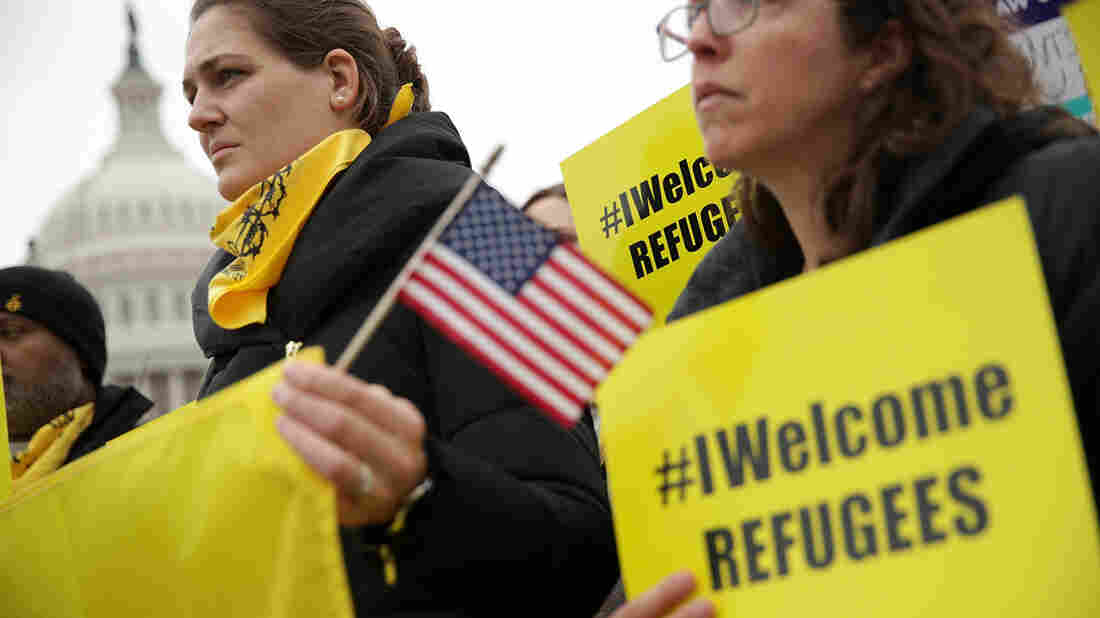 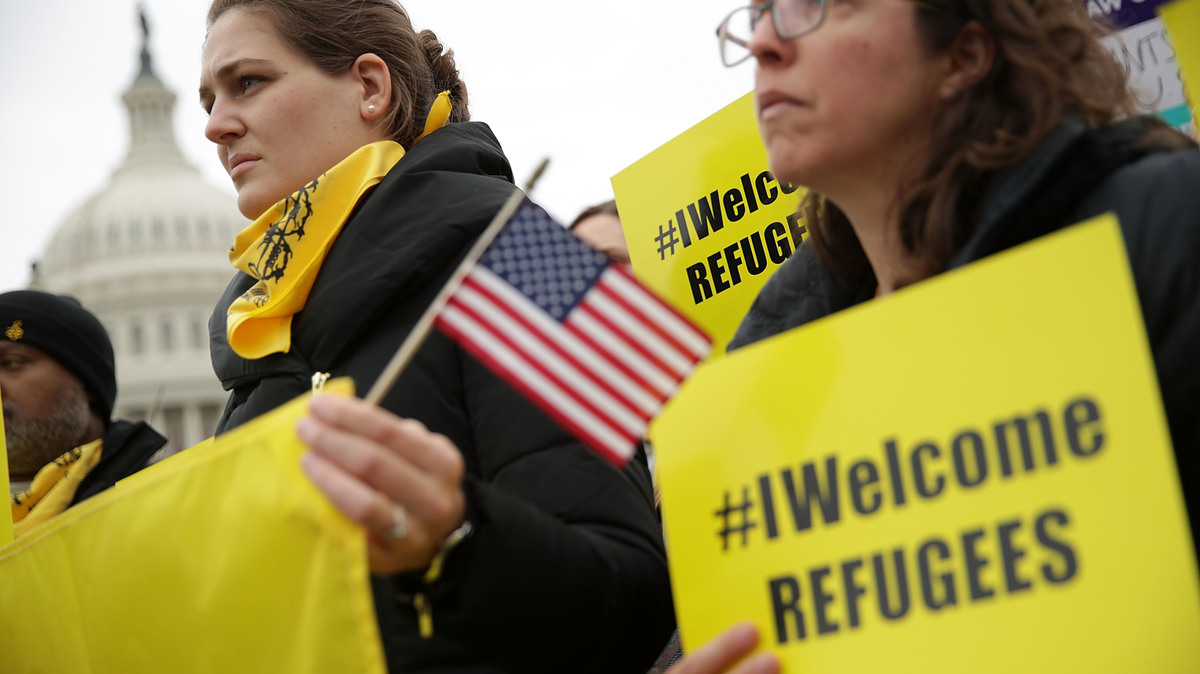 Activists join House Democrats on Feb. 1, 2017 on Capitol Hill to denounce President Trump's travel ban. A backlash to Trump's immigration policies came along with a two-decade shift among Democrats, largely unifying around immigration as a civil rights issue.

When bipartisan immigration discussions pop up, Democrats often insist it's hard to find a solution because of the GOP's immigration evolution. The days of Ronald Reagan endorsing an amnesty program and denouncing walls are long gone, replaced by President Trump's talk of "rapists" and quest for a wall.

But the reality is that Democrats have moved, too, from when the party cited the flow of drugs and "criminal immigrants" two decades ago, the same arguments for border security that Republicans use now. The facts on the ground have changed since then, but so have political forces.

The makeup of the Democratic Party has changed, and its base has adopted a fundamentally more progressive attitude on immigration in a relatively short time span, which poses a challenge for party leaders.

During that same time frame, the percentage of Democrats who said immigrants are a burden on the country because they take jobs, housing and healthcare declined by about 50 percent.

The overwhelming consensus among Democrats these days is that immigrants are an asset, not a national security threat, and that immigration reform should focus on humanitarian concerns, not border enforcement.

President Trump attacks Democrats as the party of "open borders." Although Democrats decry that label, leaders have to strike a balance when they talk about "border security" as the party's base has shifted to the left.

In his 1996 State of the Union address, President Bill Clinton proudly told Congress: "After years of neglect, this administration has taken a strong stand to stiffen the protection of our borders."

Clinton, as part of his overall law and order agenda, sought to crack down on illegal immigration.

Here's a paragraph from the 1996 Democratic Party platform:

Today's Democratic Party also believes we must remain a nation of laws.  We cannot tolerate illegal immigration and we must stop it. For years before Bill Clinton became President, Washington talked tough but failed to act. In 1992, our borders might as well not have existed. The border was under-patrolled, and what patrols there were, were under-equipped. Drugs flowed freely. Illegal immigration was rampant. Criminal immigrants, deported after committing crimes in America, returned the very next day to commit crimes again. 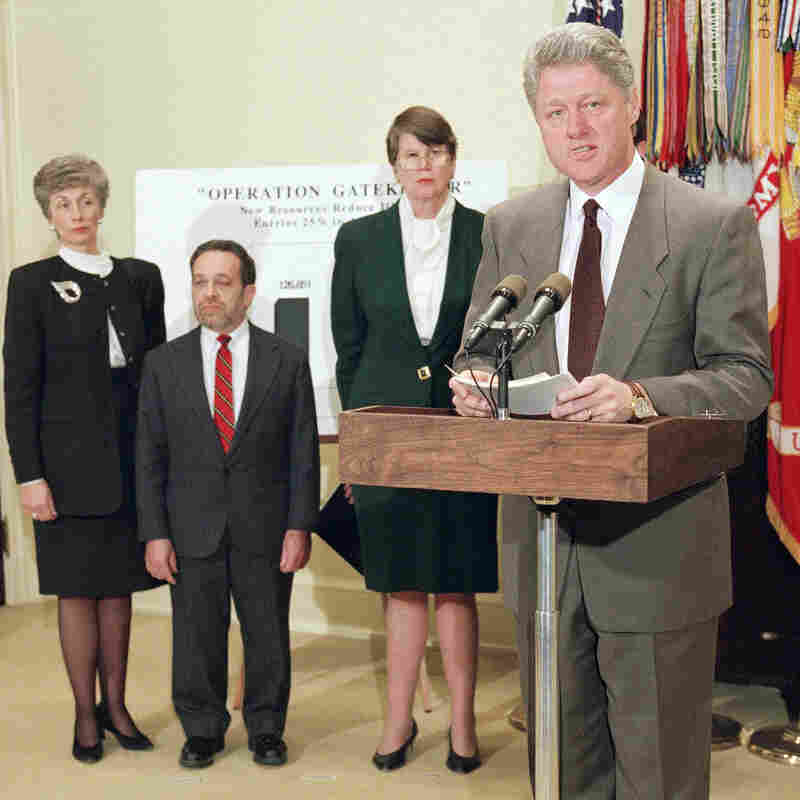 That same year, Congress passed and Clinton signed into law the Illegal Immigration Reform and Immigrant Responsibility Act of 1996.

"The '96 laws significantly increased ... the numbers of crimes for which you were deportable," said Doris Meissner, the Commissioner of the Immigration and Naturalization Service (INS) in the Clinton administration, who now feels those laws "by and large went overboard."

But Meissner also says context is important. Despite the alarming rhetoric today, warning Americans of caravans pouring over the southern border, she says that the border in the '90s was far more porous than it is today.

"I'm the person who took to the Congress the first proposal that included fencing and technology in 1994," said Meissner, who now works at the Migration Policy Institute.

From jobs to civil rights

Throughout the '80s and '90s, key constituencies in the Democratic Party worried about a growing immigration population.

"In particular, the labor movement, was on the more restrictionist, more anti-immigrant side of the debate, out of the fear that immigrants were competing with American workers" said Cecilia Muñoz, who handled immigration policy in the Obama administration. But around the year 2000, things began to change. The NAACP saw immigration as a civil rights issue rather than as a direct threat to black workers, and the AFL-CIO reversed its positions.

For decades, labor organizations had worried that undocumented immigrants willing to work for less pay would push union wages lower. But the AFL-CIO started to see immigrant labor as a growing base of their membership.

In 2007, when a majority of Democrats supported a bipartisan immigration bill, two progressives now mulling a 2020 presidential run did not.

"[Ohio Sen.] Sherrod Brown ... he thought, if we legalize and expanded the admission of immigrants it might affect American workers in a way that his state's workers would suffer," said Frank Sharry, a longtime pro-immigration activist who leads the immigration reform group America's Voice. "[Vermont Sen.] Bernie Sanders also voted against it."

Brown and Sanders' staffs now say the senators were always in favor of immigration and voted against the bill for humanitarian and labor concerns, particularly around the expansion of a guest worker program that they worried would lower wages.

But fast forward to 2013, when the Senate voted on another comprehensive immigration bill. Labor groups supported it, and not a single Democrat voted against it.

During the era in which immigration was largely perceived as a labor force issue, Democrats were far more divided. But as the leading labor critics dropped their concerns, immigration became more of a humanitarian and civil rights concern, and Democrats became more unified.

The immigrants next door

"Americans over the last decade have become more profoundly and deeply pro-immigrant because they know immigrants," he said. "Quite frankly, the driving force was immigrants — who were well represented in the big cities of L.A. and New York and Houston and Chicago and Miami — moving to all parts of the country."

And in the last couple of decades, this demographic change has been magnified within the Democratic Party.

In 1995, about a quarter of Democrats were not white. Now, 43 percent are people of color. Most of that growth in racial diversity has been among Asian-Americans and Latinos, while Asia and Latin America are the two largest sources of immigrant growth in the U.S.

But the impact of demographic change on political rhetoric is fairly recent.

The 2008 Democratic Party platform spoke about both the need to secure the country's borders and hire more Customs and Border protection agents, but by 2016, the platform only spoke about immigration enforcement in the sense that it needed to be "humane."

The nascent 2020 Democratic field is positioning itself in a similar way.

When New York Sen. Kirsten Gillibrand served in the House of Representatives between 2007 and 2009, she wanted to expand deportations; now as she runs for president, she wants to abolish ICE.

Last month on CNN, Gillibrand said some of her previous positions on immigration were not "empathetic."

"I realized that things I had said were wrong," she said. "I was not caring about others. I was not fighting for other people's kids the same way I was fighting for my own."

There's one final explanation for the Democrats' shift, and that's the influence of immigration activists.

"You have political figures adopting the activists' agenda and the activists' language," said Muñoz, who worked in the Obama White House. "Political leaders who are listening to them are focusing only on some pieces of the issue where the activism is most vocal ... for example, immigration enforcement."

She says that means other important issues, such as reforming the legal immigration process, don't receive as much attention.

But the challenge in navigating a comprehensive debate is multi-faceted. Like nearly every political issue these days, Democrats agree the intensity around the immigration debate has ratcheted up in direct response to President Trump.