Accessibility links
In Spain, Far-Right Populists Rise On Anti-Separatist Sentiment The country had been a holdout from a trend already sweeping other parts of Europe and beyond. Now the right-wing Vox party shares power in Spain's largest region. 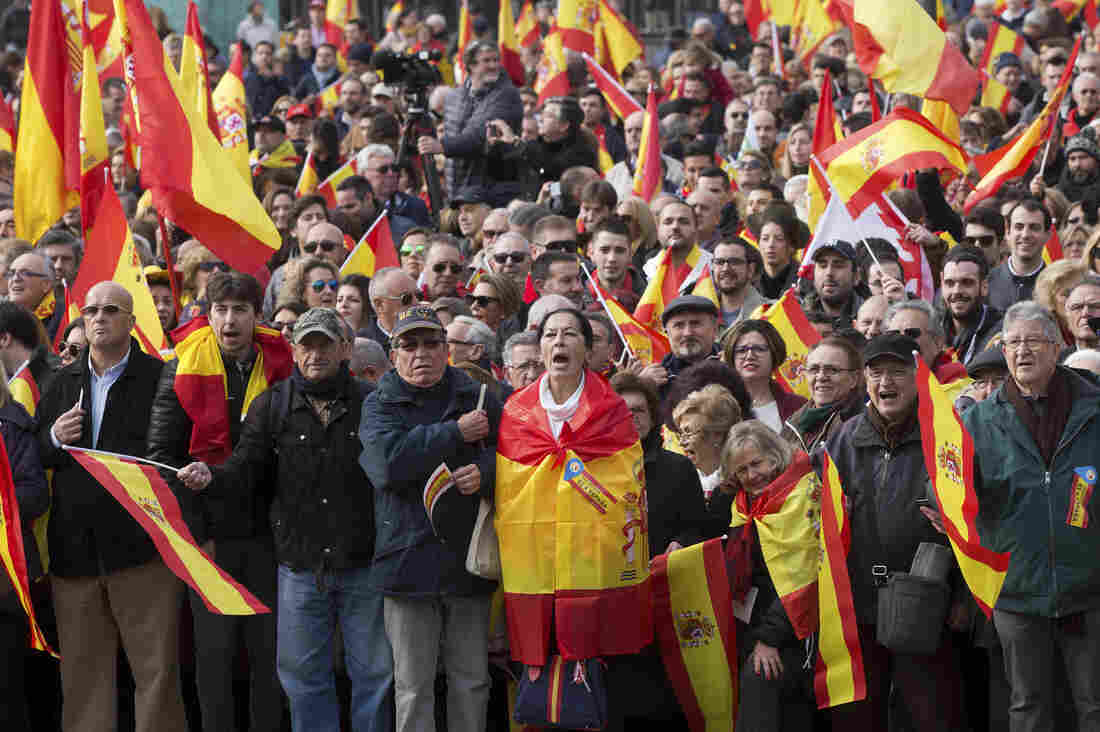 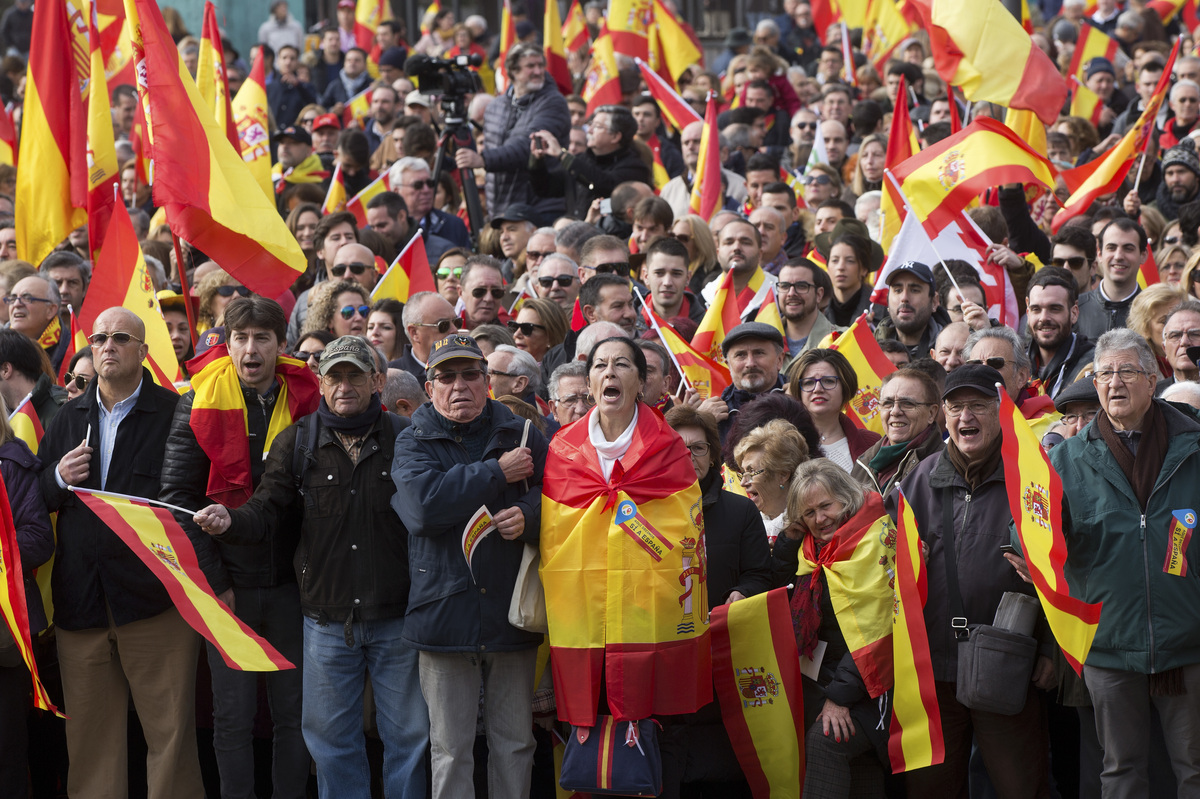 Supporters cheer on leaders of the right-wing Vox party in Madrid's Plaza de Colón on Dec. 1.

For years, Spain had avoided the rise of far-right populists, dodging a trend sweeping other parts of Europe.

But recently, that all changed.

In December, the far-right party Vox won 12 seats in the regional parliament of Andalusia, in southern Spain. It is the first time a far-right party has entered mainstream Spanish politics since the end of its decades-long dictatorship in the late 1970s. Vox now shares power in a coalition with two other parties in the country's most populous region.

Though still relatively small nationwide, Vox could soon have an impact on the national scene too. Last Friday, Prime Minister Pedro Sánchez called an early general election for April 28, after his Socialist government failed to pass its 2019 budget plan. That gives Vox a fresh chance at campaigning across the country to win its first seats in Spain's parliament in Madrid.

Right-wing populist parties are rising, and center-left ones are faltering, in other parts of Europe and beyond. And some aspects of Vox's agenda are reminiscent of the other movements, while others are local. It wants to deport undocumented migrants living in Spain, limit regional autonomy and repeal a domestic violence law that protects women from their abusers. It has received support from French nationalist Marine Le Pen as well as Steve Bannon, President Trump's former strategist. One of Vox's ads even ends with the slogan "Make Spain great again."

Spanish nationalism was the official doctrine throughout the dictatorship of Gen. Francisco Franco, a regime that isolated the country and crushed dissent. Since Franco's death in 1975, the country has made huge social, political and economic progress — and many Spaniards hoped nationalism would become a thing of the past.

But in the December elections, Vox won a foothold in Andalusia with a nationalist message. It governs along with more moderate coalition partners, the Citizens Party and the People's Party, putting an end to 36 years of center-left Socialist government in the region.

Vox formed in 2013, but it is just now gaining popularity at a time when Spain has become a leading European destination for migrants and while many Spaniards are angered by the independence movement in the northeastern region of Catalonia.

In October 2017, Catalan lawmakers voted to make Catalonia its own republic after a referendum that Spain's central government called illegal. The regional president called for talks with Madrid, stopping short of formally declaring independence. He later fled to Belgium, where he remains.

The way the media have portrayed the Catalan separatists is that they're the bad guys, that they're going to make Catalonia break away from Spain, that the Andalusian people aren't going to receive any more help.

Concha Pérez Curiel, journalism professor at the University of Seville

"The way the media [outside Catalonia] have portrayed the Catalan separatists is that they're the bad guys," says Concha Pérez Curiel, a journalism professor at the University of Seville, "that they're going to make Catalonia break away from Spain, that the Andalusian people aren't going to receive any more help."

Some of the taxes collected in Catalonia, a prosperous region, are funneled into regions such as historically poor Andalusia.

Many Spaniards say they are tired of the Catalan independence crisis and the mainstream parties' approaches to handling it.

"The Spanish government's lenience towards Catalonia has caused Spaniards to want a political party that puts its foot down," says Juan López, a 48-year-old taxi driver in Seville. 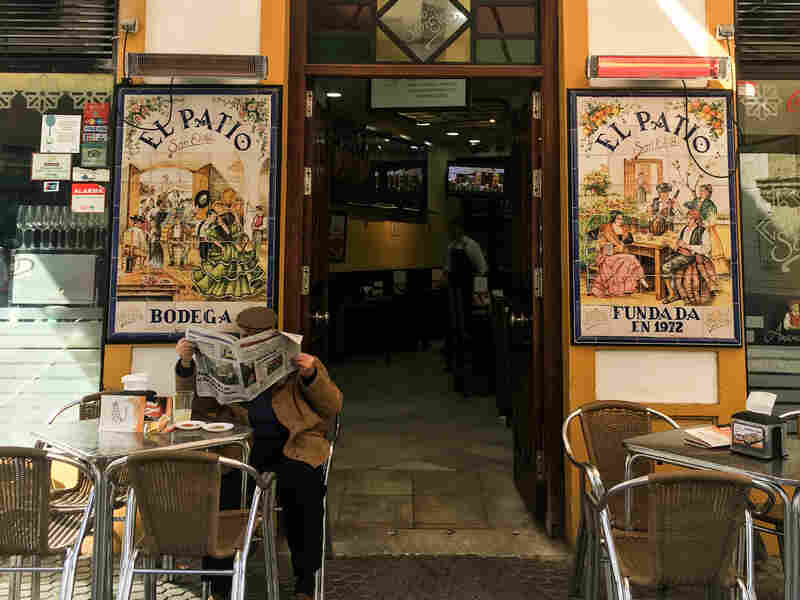 A man takes a midday break at a cafe in Seville, the capital of Andalusia, Spain. In December elections, support for the far-right Vox party and other conservative politicians went up from the previous ballot in 2015. Lucia Benavides for NPR hide caption 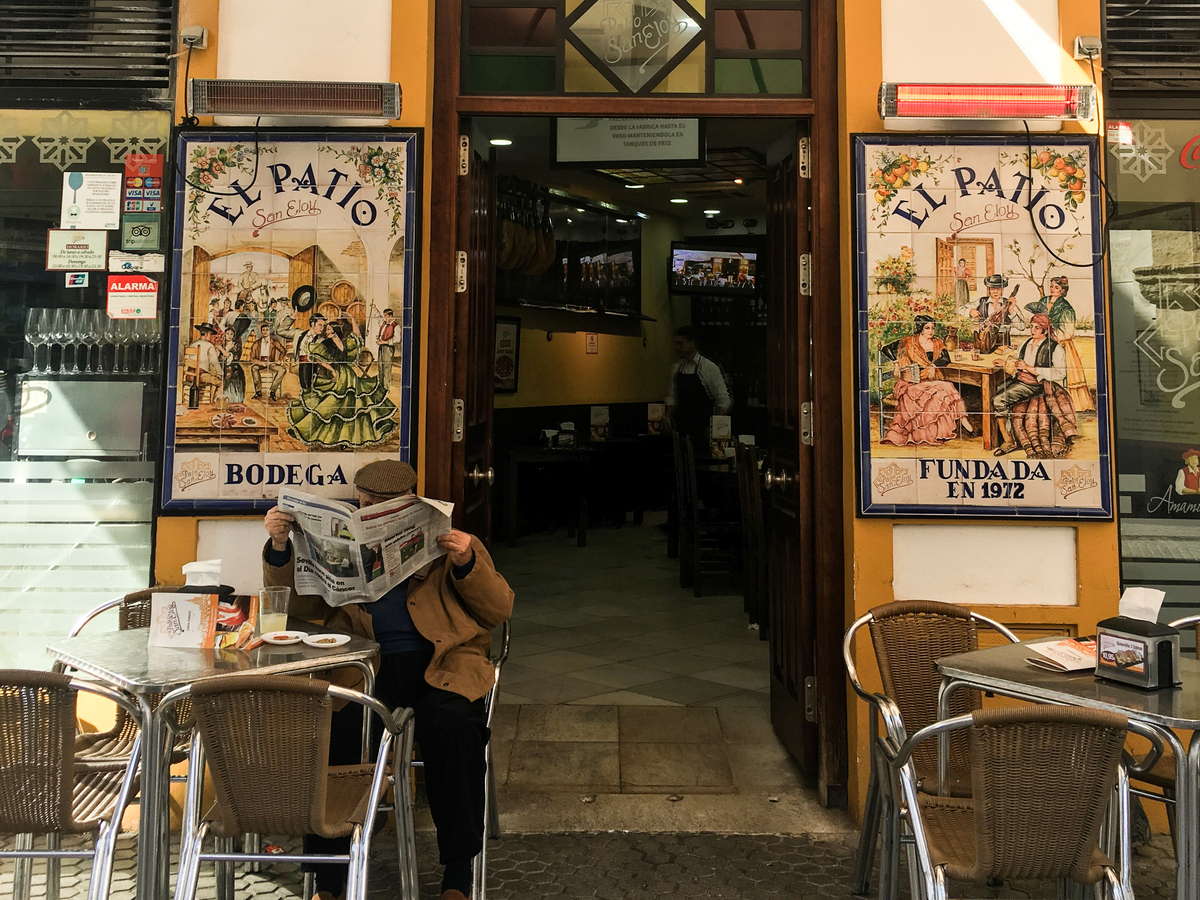 A man takes a midday break at a cafe in Seville, the capital of Andalusia, Spain. In December elections, support for the far-right Vox party and other conservative politicians went up from the previous ballot in 2015.

López says that is one of the reasons he and other Andalusians sympathize with Vox.

"That explains the results in Andalusia," he says. "None of the other parties were taking a strong stance against Catalonia, but Vox was."

Francisco Serrano, Vox's leader in Andalusia, says his party says it like it is and that's what people want. In 2017, shortly after Catalan leaders defied Spanish government orders and pushed for secession, Vox published a video in English comparing the independence movement to Nazi Germany and accusing separatist leaders of "spreading hate."

"What's happening in Catalonia is an attempted coup," Serrano tells NPR. "A sedition, a rebellion, by people who want to break the unity of Spain."

He says traditional Spanish values are being threatened by illegal immigration, regional nationalism and what he calls "feminist ideology." Serrano's campaign called for a new "Reconquista" to take place — a historical reference to the Christian states' campaign to reclaim territory in the Iberian Peninsula from Muslim rule in the Middle Ages.

Left-wing politician Javier García says the main narratives heard in Andalusia's campaigns were disconnected from the day-to-day struggles of the region's residents. Politicians talked about Catalan independence, immigration and feminism, but the region is grappling with a 21 percent unemployment rate, low wages and lack of public housing.

"That constant bombardment of information eventually has an effect on people," says García. "We're now seeing a political competition between the three right-wing parties," he adds, with the largest of the three, the People's Party, which governed the country from 2011 until last June, now shifting further right to recoup votes. 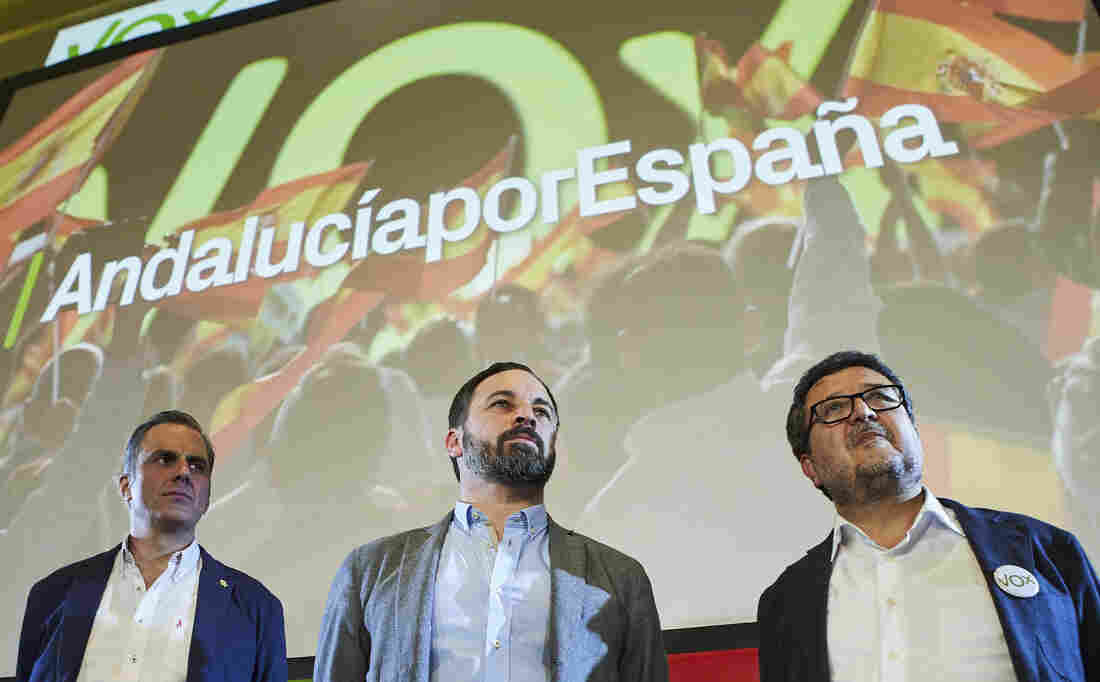 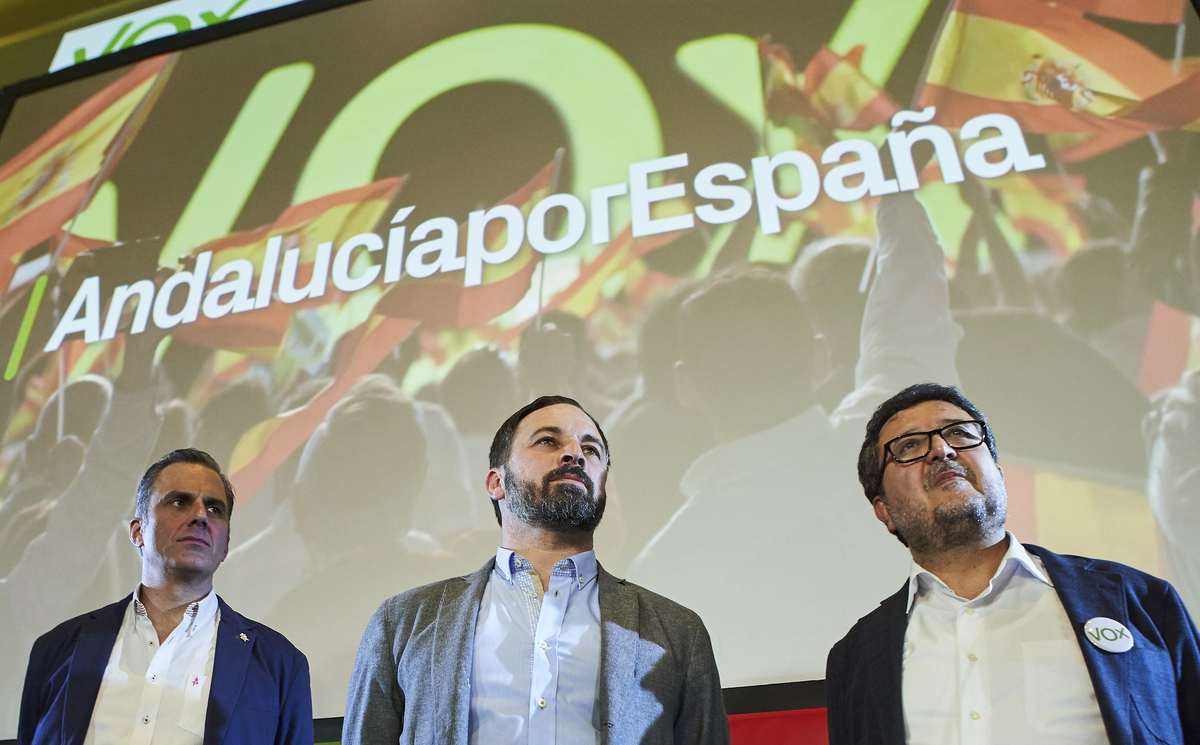 On Feb. 9, just days before Sánchez called a snap election, tens of thousands of people took to the streets in Spain's capital to demand that the government halt negotiations with Catalan separatist leaders.

The leaders of all three parties — Pablo Casado with the People's Party, Albert Rivera with the Citizens Party and Santiago Abascal with Vox — spoke side by side and took photos together at the recent protest in Madrid calling for Sánchez to step down. Several Spanish commentators said it is a sign that Vox is beginning to be accepted by Spain's center-right politicians.

Abascal seized the moment to show that his party has a firm message against regional nationalist movements. Speaking in front of protesters waving Spanish flags, he demanded that the "violent and mafialike" entities in Catalonia be disbanded.

"Catalonia's autonomy needs to be suspended so that we can reinstate constitutional order and Spain's rule of law," he said.

A poll at the end of January said Vox could win 6.5 percent of the vote in a national election — up from just 3.7 percent in December. Together with the Citizens and People's parties — which polled at 17.7 percent and 14.9 percent, respectively — Spain's right-wing parties could form a large enough coalition to govern, according to Spanish newspaper El País.

Spain's political climate will continue to be tested in the general election of April 28 and then again during elections for city mayors and the European Parliament at the end of May.