Accessibility links
What To Expect From North Korea At The Next Trump-Kim Summit Analysts weigh the possible offers North Korea's leader could make later this month in Vietnam. 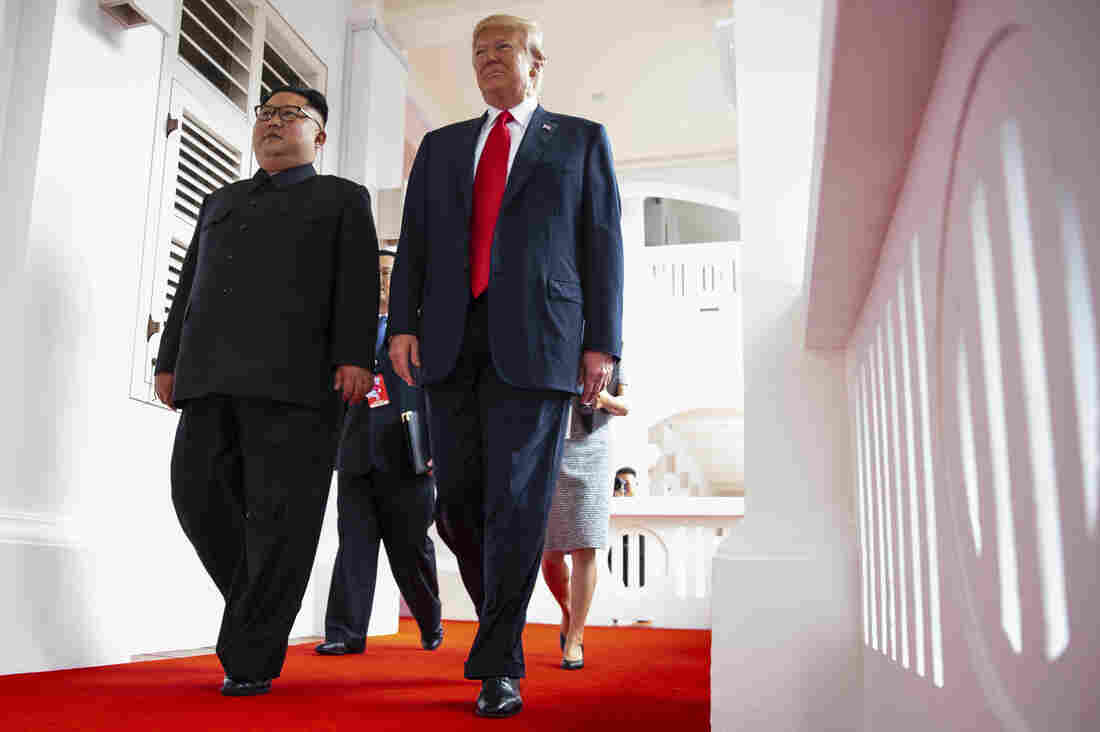 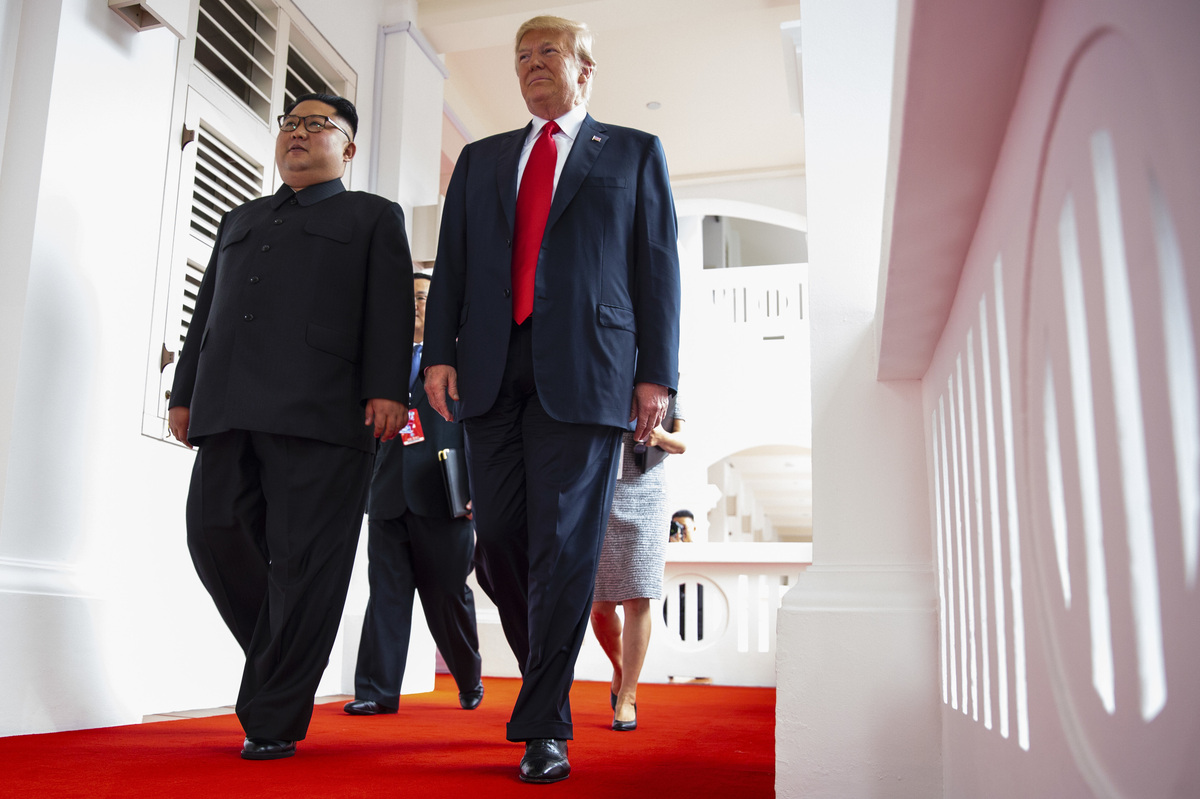 North Korea's leader Kim Jong Un and President Trump walk together at a resort on Sentosa Island in Singapore on June 12, 2018.

With just days to go before his second summit with North Korean leader Kim Jong Un, President Trump seems to have tried to lower public expectations for the meeting set for Feb. 27 to 28 in Hanoi, Vietnam.

"I'm in no rush for speed. We just don't want testing," Trump remarked on Friday, suggesting that he might not insist North Korea abandon its nuclear weapons, as long as it stops testing them.

North Korea appears to have imposed a moratorium on its testing of missiles and nuclear bombs since late 2017, but experts suspect it continues working on these programs in secret.

Trump and Kim made vague, aspirational commitments to denuclearization and peace on the Korean Peninsula at their Singapore summit in June 2018. Now there are rising expectations for the second summit to "include concrete, detailed, actual execution plans," says Yang Moo-jin, a professor at the University of North Korean Studies in Seoul, South Korea.

What sort of deliverables North Korea is prepared to bring to the table is so far hard to tell.

"Because North Korea is so tight-lipped about what it's willing to offer, we can't expect too much," says Park Jiyoung, a nuclear expert at the Asan Institute for Policy Studies, a Seoul-based think tank.

In a televised New Year's address, Kim seemed to be offering a freeze on his nuclear weapons programs.

"We declared at home and abroad that we would neither make and test nuclear weapons any longer," he said, "nor use and proliferate them, and we have taken various practical measures to that end."

Those measures include the partial dismantlement last year of a nuclear test site at Punggye-ri and of a missile launch site at Tongchang-ri. Kim also pledged to his South Korean counterpart to shut down the North's Yongbyon nuclear plant, if the United States offers an appropriate response.

A logical offer from Kim at the summit, analysts contend, would be to allow the outside world to verify what he has done.

"If we actually witness in the current months an agreement to get inspectors back on the ground in North Korea and to verify that certain facilities are no longer producing weapons-grade material, that would be progress," says Leif-Eric Easley, an international relations expert at Ewha Womans University in Seoul.

Critics argue that those facilities are old or obsolete, so North Korea is not really giving anything up by dismantling them. But Yang of the University of North Korean Studies says the sites have both practical and symbolic significance. "North Korea has continuously improved the Yongbyon facilities," he says, "and it has produced weapons-grade plutonium and uranium there. I think it accounts for about 50 percent of North Korea's nuclear capabilities."

If North Korea needs to take 100 steps to denuclearize, what is being discussed now seems to be only the first two or three steps.

North Korea last shut and sealed Yongbyon in 2007 and allowed international inspectors to verify it, but the deal broke down, and the plant went back to reprocessing nuclear fuel about two years later.

So North Korea's anticipated new offerings, many experts agree, may not be new at all. They likely will not be comprehensive and will be conditional on what the U.S. gives in return. And it is not even certain that Pyongyang will deliver them as promised.

But analysts believe Kim's offerings could nevertheless be significant. And they would be better than a diplomatic stalemate or the threat of war. It's just that there's a very long way to go.

"If North Korea needs to take 100 steps to denuclearize, what is being discussed now seems to be only the first two or three steps," says Park.

North Korea's main objectives, meanwhile, are to get relief from economic sanctions and a security guarantee in the form of a formal declaration ending the Korean War, which was halted by an armistice in 1953.

A peace deal is arguably something Kim could offer Trump, who is running for re-election and hopes to win a Nobel Peace Prize for his engagement with North Korea.

Complicating matters, Pyongyang's understanding of denuclearization is different from Washington's. While the U.S. seeks to eliminate North Korea's program, the North expects America to reciprocate by removing its nuclear umbrella in the region that protects South Korea and Japan.

Some experts argue that going into a summit unprepared and bringing home a bad deal would not be worth it.

"My concern is: For the benefit derived from this process with North Korea, what are the costs?" Easley asks.

If, for example, the U.S. responds by lifting sanctions on North Korea, ignoring its human rights situation, or selling out South Korean or Japanese allies, then "I think that those costs may outweigh the benefits, and that's something we have to watch very carefully," he says.

There are things the U.S. can offer in return that would be commensurate with modest concessions from Kim, says Asan Institute's Park, such as opening a liaison office in Pyongyang or allowing more humanitarian aid into North Korea.

Both of these steps would be easily reversible, and the U.S. has already pledged to allow more aid in anyway.