Accessibility links
Mark Harris' Son Says He Warned Of North Carolina Ballot Issues In a hearing on Wednesday, John Harris said he had spoken to his father, Mark Harris, about his concerns with the collection of absentee ballots. Mark Harris is expected to take the stand Thursday. 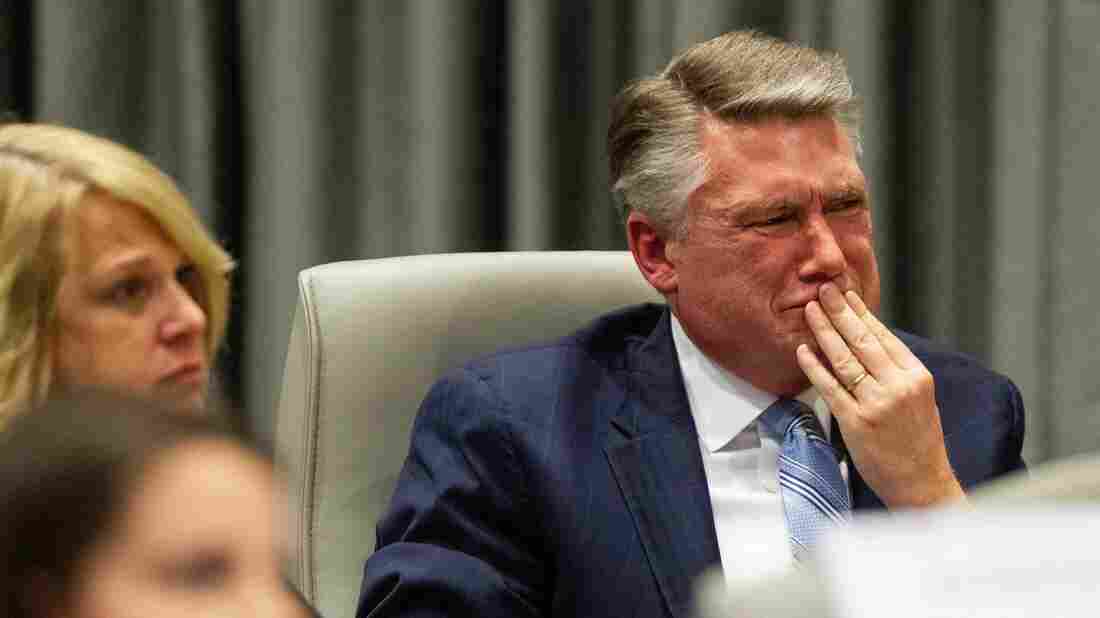 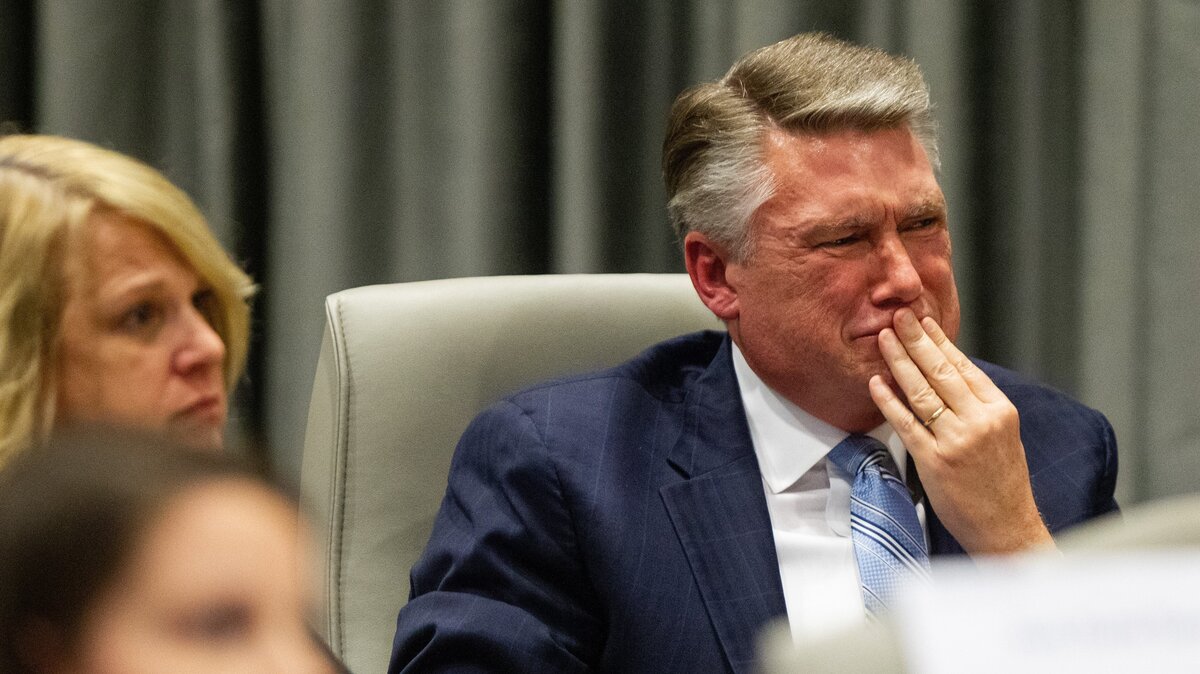 On day three of a hearing meant to get to the bottom of an absentee ballot scheme in the as-yet-undecided U.S. House race in North Carolina's 9th Congressional District, Republican Mark Harris' son testified that he warned his father about the political operative at the investigation's center.

All eyes now are on Harris, who is expected to testify first thing Thursday morning about what he knew was going on in the eastern part of the 9th District, and when he knew it.

The State Board of Elections' investigation is centered on a political operative, McCrae Dowless, who was hired by Harris to get out the vote. A consultant testified that Dowless was paid roughly 5 percent of the Harris campaign's total expenditures over the course of the primary and general elections.

Investigators say Dowless' efforts went beyond what is legal in North Carolina, but Harris has said publicly a number of times that he knew nothing about any illegal activity being done on behalf of his campaign. Testimony by his own son on Wednesday calls those assertions into question.

Harris' son, John Harris, is an assistant U.S. attorney in North Carolina. He said Wednesday that he reviewed the 2016 primary results after Harris was defeated by incumbent Robert Pittenger.

He noticed oddities in vote-by-mail results in Bladen County, where the third-place finisher, Todd Johnson, won a near sweep of those ballots in the county. Dowless worked on behalf of Johnson in 2016.

That led him to believe that someone was collecting ballots and turning them in.

"Did you talk about those concerns with Mark Harris?" asked Kim Strach, the executive director of the North Carolina State Board of Elections.

Investigators showed the board a number of emails John Harris exchanged with his father about absentee ballots in Bladen County, including an email in which he forwarded the specific North Carolina statute that forbids the collection of ballots.

John Harris said he did not think Dowless was honest about his tactics before Mark Harris decided to hire him.

"I had no reason to believe that my father or mother knew Dowless was doing the things that have been described [this week]," John Harris said. "I think they were lied to, and they believed the person who lied to them."

Dowless declined to testify on Monday unless the State Board of Elections provided him immunity from future prosecution. Board Chairman Robert Cordle said the board was not willing to provide that immunity.

Multiple people have testified to the state board that they were paid by Dowless to collect ballots, which is illegal in the state. One woman, Lisa Britt, testified that she also filled out some down-ballot races that voters had left blank when she collected their ballots, which is against the law.

The middleman between Dowless and Mark Harris throughout the primary and general election campaigns was political consultant Andy Yates, who testified for much of Tuesday and on Wednesday morning.

Even though Harris hired Dowless before Yates' consulting firm was retained to help the campaign in 2017, Yates said it became his responsibility to pay Dowless and communicate with him about absentee ballot efforts in Bladen County.

Yates paid Dowless more than $100,000 throughout the entire campaign but said he thought the money was used only to register voters and encourage them to turn in their ballots. Yates said Dowless promised him on a number of occasions that he and his team never handled ballots.

"I specifically asked him if he had told his workers [not to touch ballots]," Yates said Tuesday afternoon. "I knew that was the one big no-no with absentee ballots."

John Harris said he shared his concerns about Dowless being a "shady character" with Yates in the summer of 2017, but Yates said he did not recall that conversation.

"I love my dad and I love my mom. I certainly have no vendetta against them," John Harris said. "I think they made mistakes in this process and they certainly did things differently than I would have done them."

He added that there was an ongoing "exploitation of this process for political gain" by both political parties that he hoped would soon come to an end.

Mark Harris could be seen crying at the end of his son's testimony.

How much was known

Yates said that before Mark Harris introduced him to Dowless, Harris told him that Dowless had a criminal history involving "minor charges" related to a divorce more than two decades ago. Yates said he looked up Dowless using Google before they met and came across those charges but said he didn't come across felony fraud charges that Dowless had also faced.

Lots of questions about whether law requires new election even if there's no evidence Harris' margin would have been overturned due to fraud. Here's the NC law on that pic.twitter.com/bPzgWYMKBK

Yates also said he did not see any of the news stories about Dowless' unsavory election tactics, which included documentation that Dowless was paying people to collect ballots in 2016.

Marc Elias, who is representing the Democratic candidate in the 9th District, Dan McCready, even played audio from a This American Life episode that centered on election irregularities in Bladen County.

Harris is sure to be questioned on Thursday about his son's testimony and about what kind of background checks he or his campaign staff performed on Dowless.

The State Board of Elections can call a new election if "irregularities or improprieties occurred to such an extent that they taint the results of the entire election and cast doubt on its fairness."

The question of whether Harris knew about the illegal operation that investigators and witnesses say Dowless was running cuts to the heart of whether the improprieties give the board enough evidence to call into question the election's fairness.

State Republican officials are still pushing for Harris to be certified. 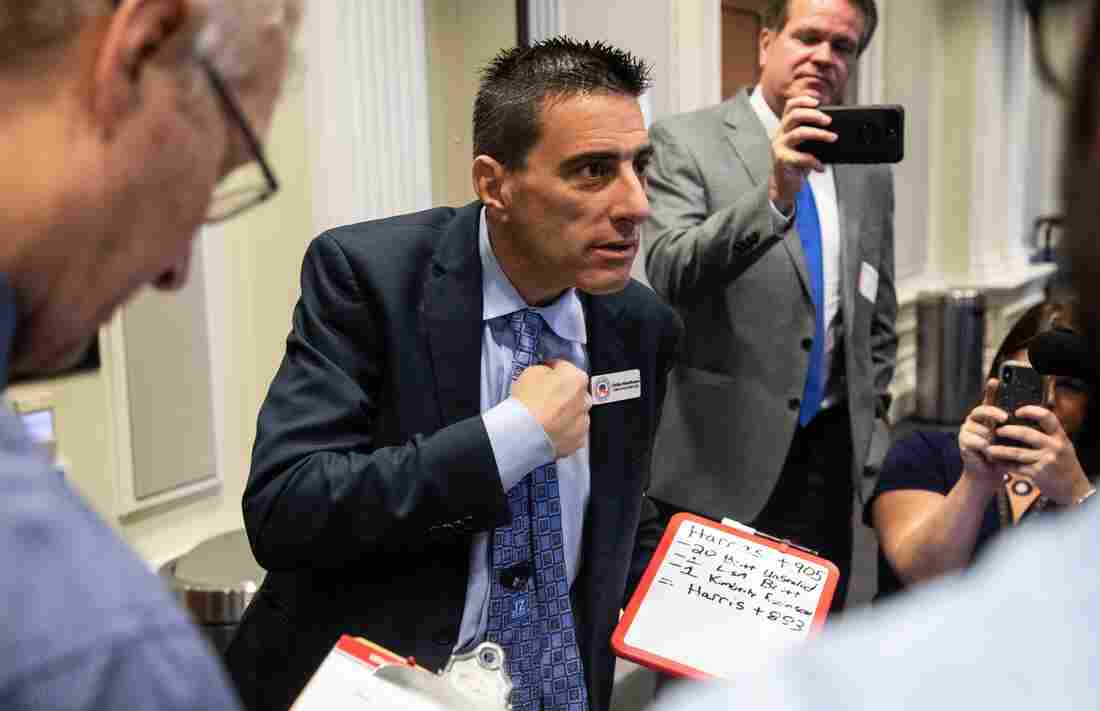 Dallas Woodhouse, executive director of the North Carolina Republican Party, talks with reporters prior to the second day of a public hearing on the investigation into 9th Congressional District voting irregularities. Travis Long/News & Observer hide caption Dallas Woodhouse, executive director of the North Carolina Republican Party, talks with reporters prior to the second day of a public hearing on the investigation into 9th Congressional District voting irregularities.

At the hearing, Dallas Woodhouse, executive director of the North Carolina Republican Party, has been carrying around a whiteboard keeping track of the number of ballots that witnesses have testified were manipulated or suspect. That number is not yet close to Harris' 905-vote margin in the race.

"At the end of the day, if the board were to throw out a margin by 905 votes, over a hundred votes, that would be unprecedented, and I think it would be dangerous," Woodhouse said Tuesday. "The math right now appears favorable [to Harris]."

Investigators have said, however, that Dowless and his associates submitted more than 1,000 absentee ballot requests in the 9th Congressional District.

Earlier on Tuesday, testimony also focused on election administration in the district. One poll worker, Agnes Willis, testified that a number of poll workers improperly saw early voting results in at least one race, even though those results weren't supposed to be tabulated until Election Day. There are questions about whether those results were shared with people involved in political campaigns.