Accessibility links
Covington Catholic Teen Nick Sandmann Sues 'Washington Post' For $250 Million His family says the newspaper targeted the student and defamed him for political purposes after the release of a video that appeared to show a standoff between him and a Native American activist. 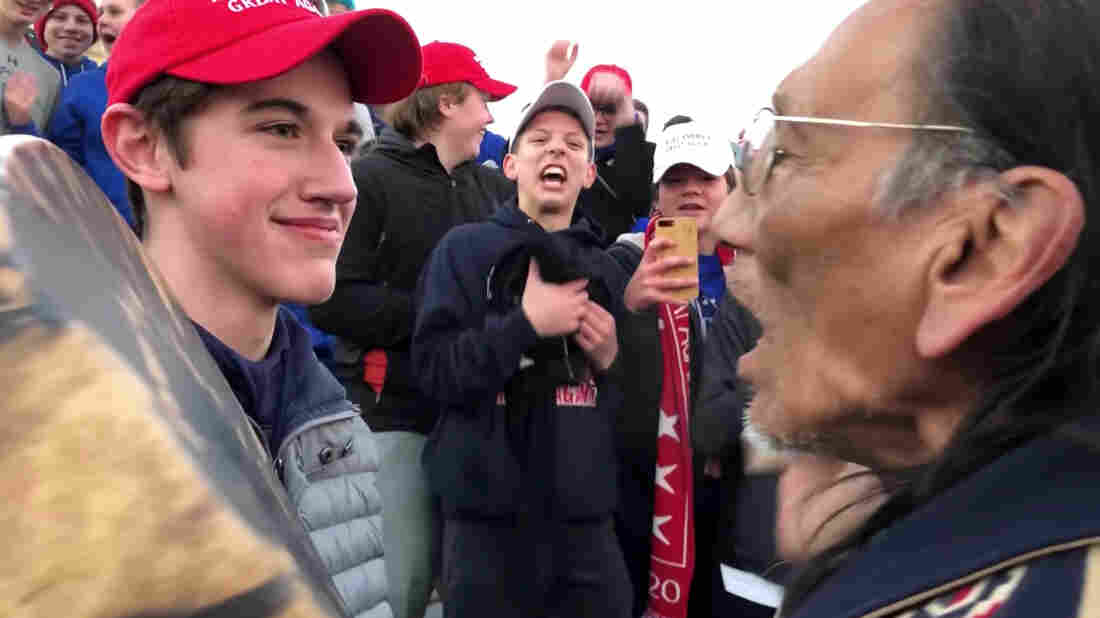 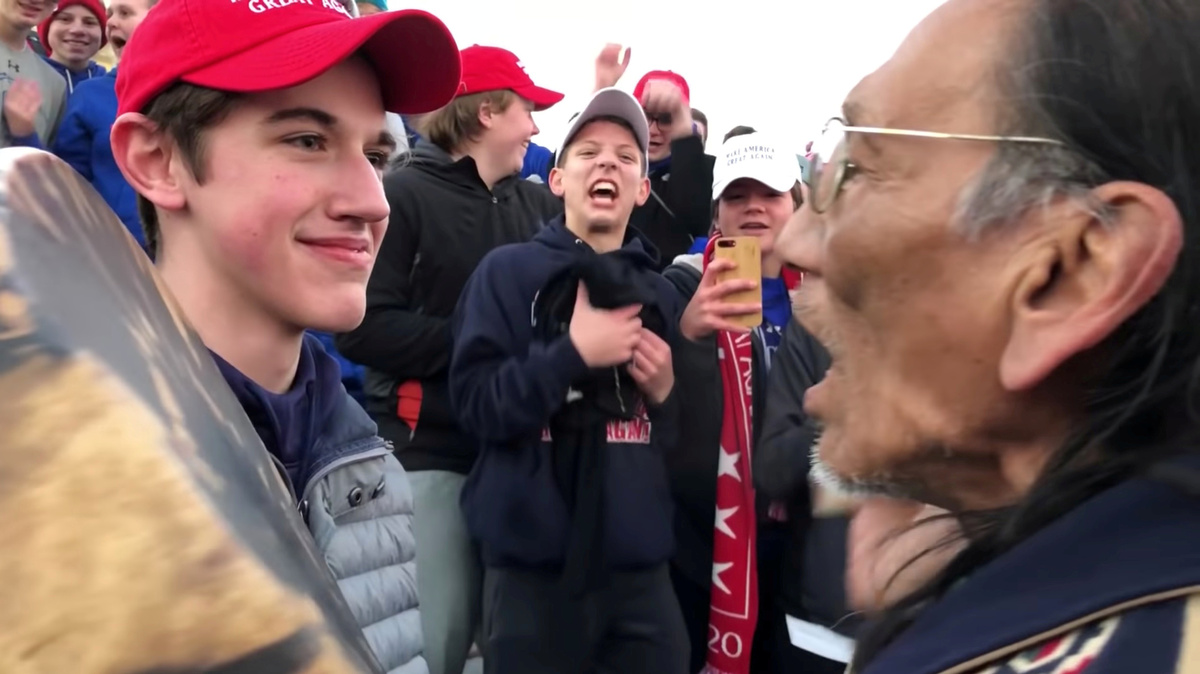 The family of Nicholas Sandmann, 16, is suing The Washington Post, accusing the newspaper of targeting the Covington Catholic High School student for political purposes. Sandmann is seen here along with Native American activist Nathan Phillips on Jan. 18.

Teenager Nicholas Sandmann's family is suing The Washington Post, saying it targeted the Covington Catholic High School student and defamed him for political purposes when it reported on a January encounter on the steps of the Lincoln Memorial between Sandmann and Native American activist Nathan Phillips.

Ted and Julie Sandmann filed the suit on their son's behalf, seeking $250 million in damages — the same amount Amazon founder Jeff Bezos paid to purchase the Post in 2013. Of that amount, the lawsuit is seeking $50 million in compensation for the alleged damage done, while the remaining $200 million in punitive damages would be aimed at punishing the newspaper company.

In their complaint, the Sandmanns say they are asking a federal district court in Kentucky to help them "teach the Post a lesson it will never forget."

Responding to news of the lawsuit, the newspaper's spokeswoman Kristine Coratti Kelly said in a statement to NPR, "We are reviewing a copy of the lawsuit, and we plan to mount a vigorous defense."

The Jan. 18 incident was the subject of a viral video and numerous media reports after, the complaint alleges, a short video of the encounter was initially perceived to be showing Sandmann and other Covington students — many of them wearing red "Make America Great Again" hats — as blocking Phillips' path and mocking him as he beat a drum. Longer recordings of the encounter emerged that gave a fuller picture of how the event developed, including scenes in which the students were mocked by a third group of demonstrators — and ones that seemed to show Phillips had approached Sandmann, not the opposite.

In the days that followed, a national debate erupted over who was in the wrong during the encounter at the Lincoln Memorial, where at least three groups of demonstrators — from the March for Life, the Indigenous Peoples' March and the Black Hebrew Israelites — converged near the end of the day.

Soon, many media outlets were being accused by critics from across the political spectrum of either distorting the incident or of drawing conclusions from incomplete information. (NPR's public editor published a column about NPR's coverage of the incident.)

Sandmann's school, Covington Catholic in Kentucky, initially condemned the students' actions and apologized on their behalf, saying in a joint statement from the Covington Diocese that it would investigate behavior that it saw as contrary to "the Church's teachings on the dignity and respect of the human person."

But last week, the diocese announced that a private detective agency that it hired to investigate the incident had concluded that the Covington students had neither instigated a standoff with Phillips nor made "offensive or racist statements."

The new lawsuit draws on the diocese's inquiry, which was carried out by Greater Cincinnati Investigation.

The lawsuit accuses the Post of publishing seven stories with what it calls a "false and defamatory gist" about the encounter. It also alleges that the Post "contributed to the rampant cyber-assault and cyber-bullying" that was aimed at Sandmann after the story drew national attention.

The 38-page court filing seeks a jury trial to consider the case, including whether the newspaper was motivated by a desire to pursue a "biased agenda" against President Trump and to impugn people who support him.

The lawsuit was filed in a federal district court in Kentucky on Tuesday; on Wednesday morning, Trump sided with the Sandmanns and against the Post, quoting from the complaint and saying in a tweet, "Go get them Nick. Fake News!"

The complaint notes the Post's role in popularizing the term "McCarthyism" during the 1950s — and it alleges that the newspaper "engaged in a modern-day form of McCarthyism by competing with CNN and NBC, among others, to claim leadership of a mainstream and social media mob of bullies" that attacked Sandmann.

Sandmann has said he received death threats and insults in the initial backlash over the incident. The lawsuit accuses the Post of targeting Sandmann "because he was the white, Catholic student" wearing a MAGA cap on his school's field trip to Washington, D.C., to attend the March for Life rally.

While the incident took place in Washington, D.C., the lawsuit was filed in Kentucky, where Sandmann and his family live. Explaining that move, the complaint claims the teenager's home state is where the damage to his reputation is most serious and that the Post also does business there, both online and through subscriptions.

The Sandmanns' legal team is led by L. Lin Wood, who heads a law firm in Atlanta and whose list of previous clients ranges from Richard Jewell, who was falsely accused of being the Olympic bomber, to John and Patsy Ramsey, parents of slain child JonBenét Ramsey. The Kentucky law firm Hemmer DeFrank Wessels is also part of the lawsuit against the Post.