Accessibility links
World's Largest Bee Is Spotted For First Time In Decades The bee towers over its apian cousins. Females have been recorded as being at least an inch and a half long. Add to that a pair of gigantic mandibles, and it's a bee like no other. 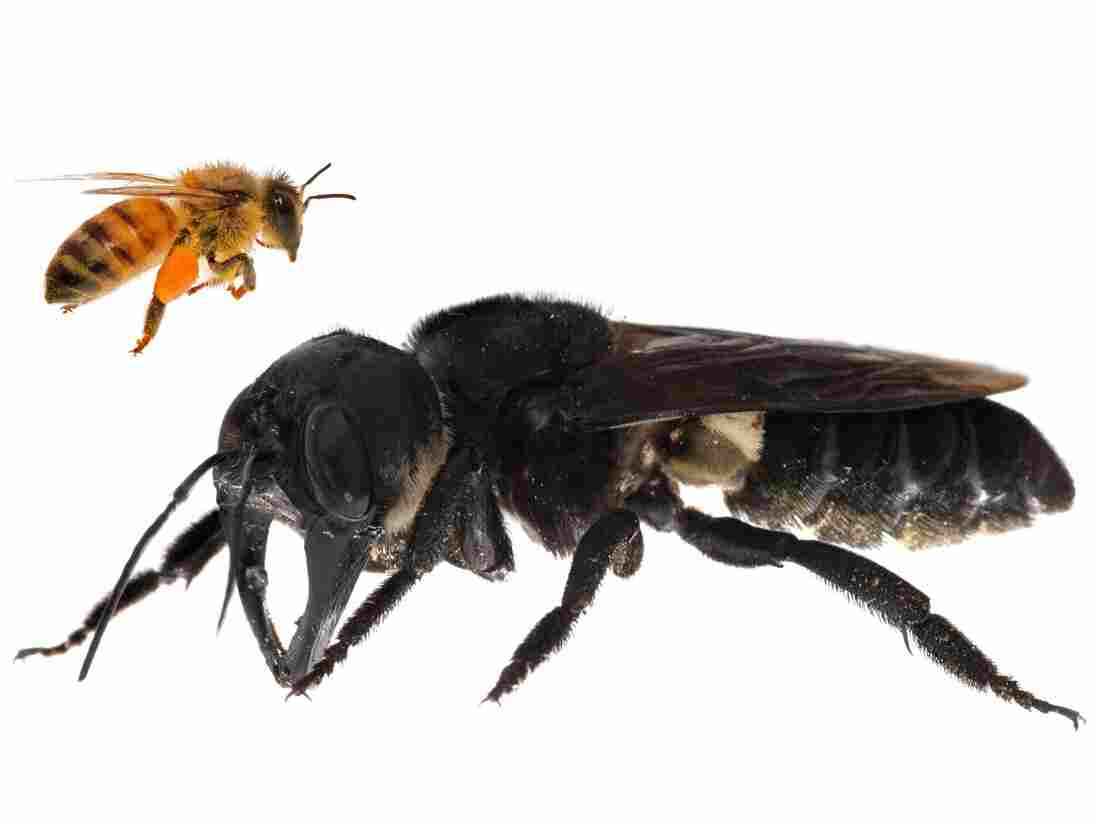 One of the first images of a living Wallace's giant bee was captured after a recent rediscovery of the world's largest bee in Indonesia. As this composite image illustrates, the bee is approximately four times larger than a European honeybee. Clay Bolt/claybolt.com hide caption 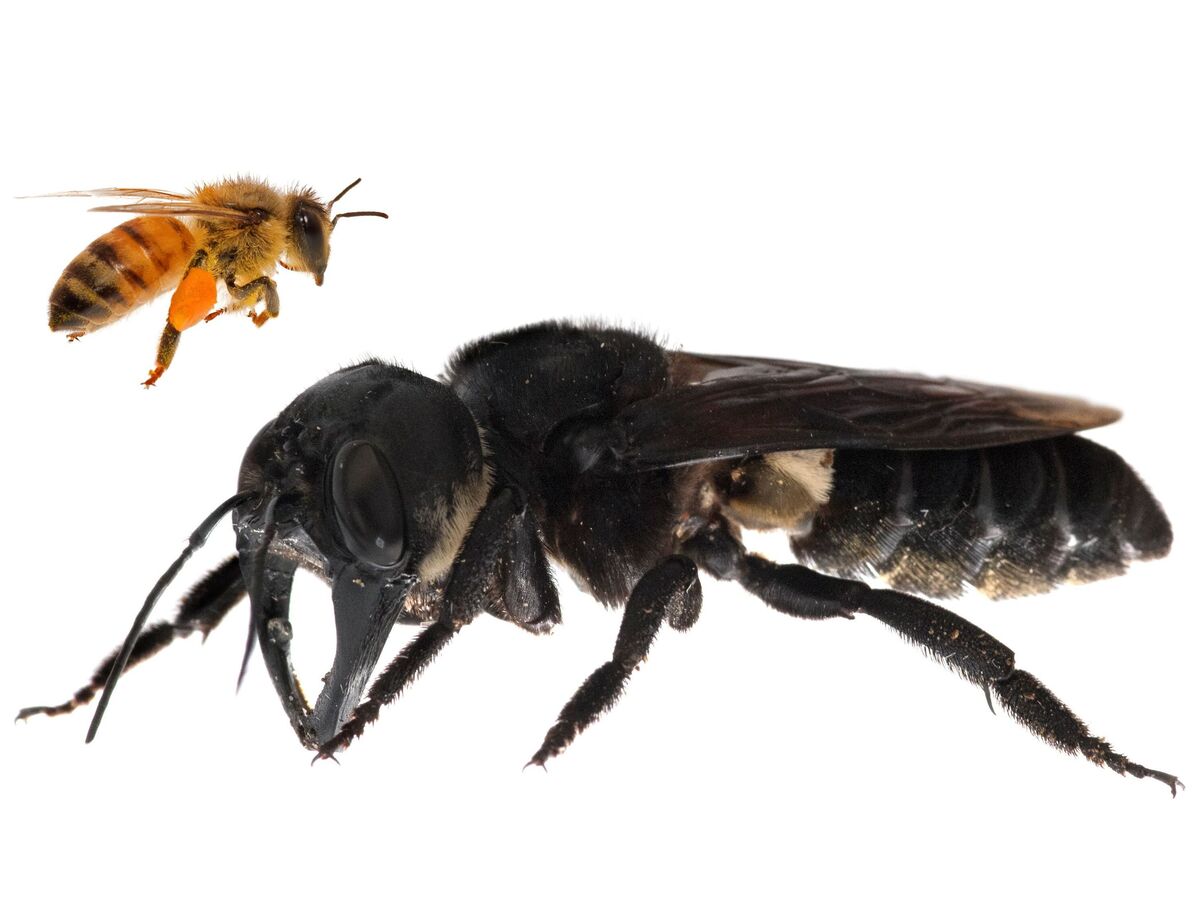 One of the first images of a living Wallace's giant bee was captured after a recent rediscovery of the world's largest bee in Indonesia. As this composite image illustrates, the bee is approximately four times larger than a European honeybee.

You might think the world's biggest bee would be easy to find. But that's not the case: Until recently, the last time anyone had reported seeing a Wallace's giant bee living in the wild was in 1981. That changed in January, when the rare bee was spotted on an island of Indonesia.

The Wallace's giant bee — Megachile pluto — towers over European honeybees. The female's size has been recorded as at least an inch and a half long, with a tongue that's nearly an inch long. Add to that a pair of gigantic mandibles, and it's a bee like no other.

"It was absolutely breathtaking to see this 'flying bulldog' of an insect that we weren't sure existed anymore — to have real proof right there in front of us in the wild," said natural history photographer Clay Bolt, who was part of a small team that sought out the Wallace's giant bee.

The team found a female bee living in a termite nest on the side of a tree — the large bee's preferred habitat. Female Wallace's giant bees use resin and wood to create tunnels and cells in existing nests, carving out their own living space away from the termites.

"To actually see how beautiful and big the species is in life, to hear the sound of its giant wings thrumming as it flew past my head, was just incredible," Bolt said.

About that sound: Touting its discovery, the team posted b-roll (!) video of the Wallace's giant bee flying around in a small enclosure, its wings sounding like a deep drone compared with the high-pitched buzz of honeybees. 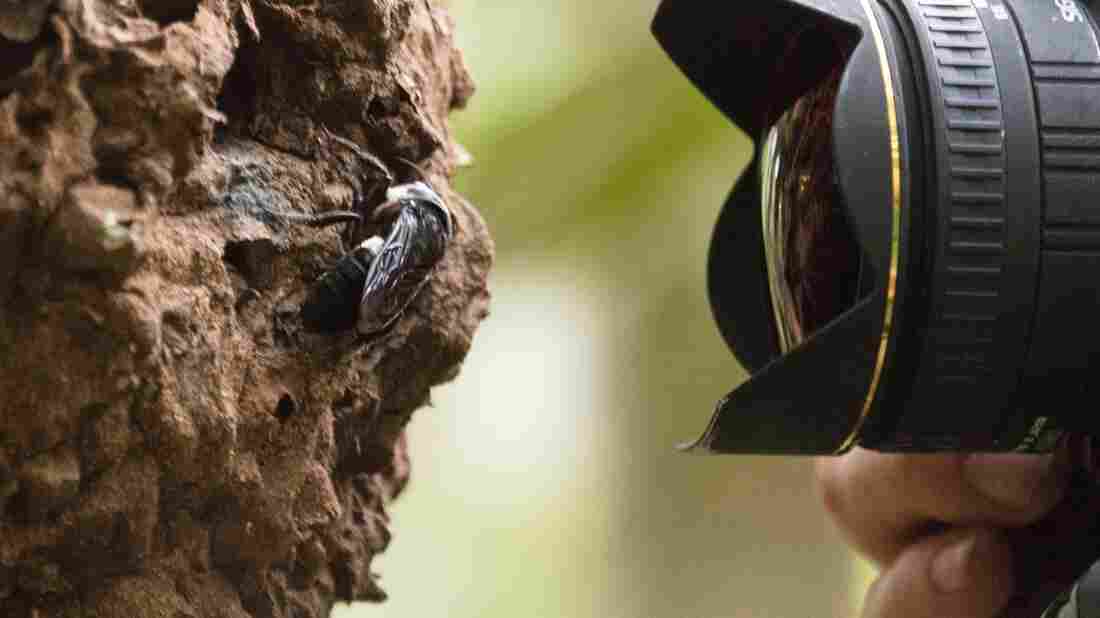 The Wallace's giant bee is photographed by Clay Bolt outside its home inside a termite's nest in the North Moluccas islands of Indonesia. Simon Robson hide caption 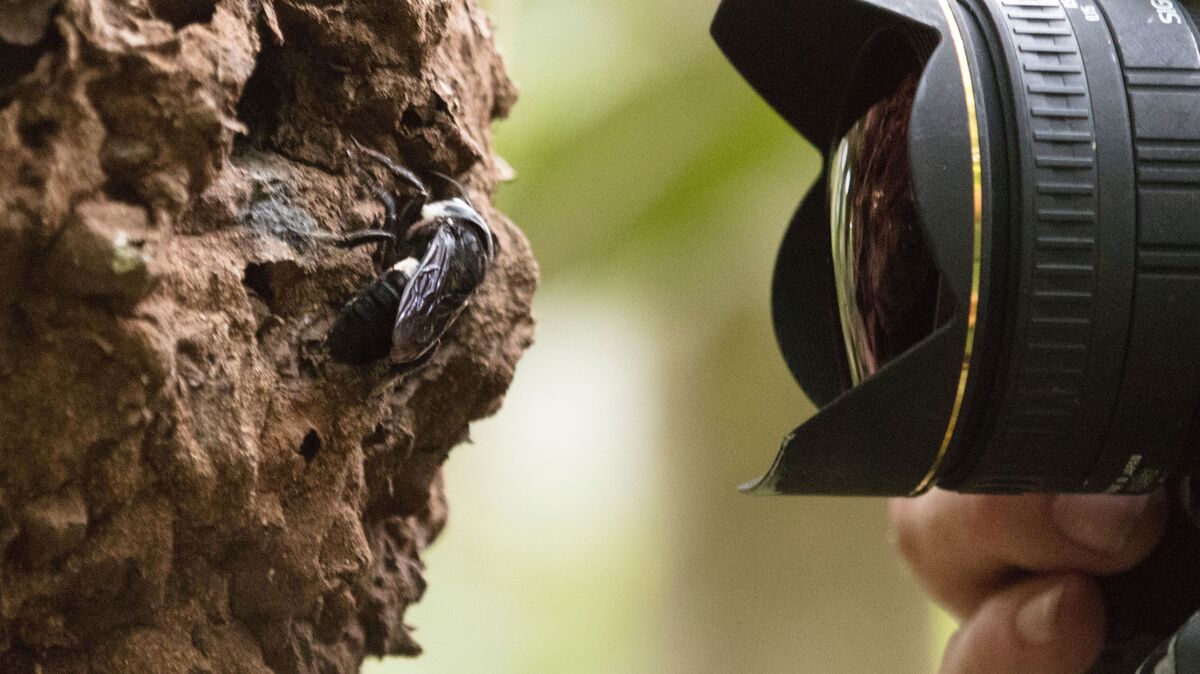 The Wallace's giant bee is photographed by Clay Bolt outside its home inside a termite's nest in the North Moluccas islands of Indonesia.

It's not unusual for the Wallace's giant bee to go long periods without being seen by humans. It has been observed only a handful of times since it was discovered in the 1850s by British naturalist Alfred Russel Wallace. When the bee was last rediscovered, in 1981, it had been presumed extinct.

"I've been saying it's thought to be extinct," said professor Dave Goulson, who heads a bee lab at the University of Sussex. "I was happy to hear that's not the case."

The breakthrough find came on the final day of a five-day trip to Indonesia's North Moluccas islands. Bolt's visit to Indonesia came as part of Global Wildlife Conservation's Search for Lost Species program. Others on the trip included Princeton University entomologist Eli Wyman; Simon Robson, a biology professor at the University of Sydney in Australia; and Glen Chilton, a professor at Saint Mary's University in Canada.

The Brobdingnagian bee isn't remarkable only for its size; it also sports unusually large mandibles, which are often compared to a stag beetle's.

"Messer's rediscovery gave us some insight, but we still know next to nothing about this extraordinary insect," Wyman said, echoing the reaction of other experts after the bee was spotted anew.

In theory, Goulson said, the large mandibles are similar to mason bees, which use them to help form the balls of mud that shape their nests. But those apian relatives are nowhere near as imposing as the Wallace's giant bee, he added.

Entomologist Jason Gibbs, who studies bees at the University of Manitoba, says the Megachilidae family of bees use a variety of materials to build nests, from leaves and flower petals to resins and mud.

"There is an introduced species in eastern North America, Megachile sculpturalis, which is closely related and quite a large and dramatic bee to see," Gibbs said. "Megachile pluto is like that species dialed up to eleven."

In the early 1980s, Messer found several Wallace's giant bees living in mountainous terrain of three islands in the North Moluccas, near the equator.

That remote location is a main reason the Wallace's giant bee has been seen so infrequently, said Goulson, who has written several books about bees. And now, he added, that sheer remoteness might help protect it from anyone seeking to get into the bee-poaching business and sell a rare specimen.

Bolt and Wyman say they want their discovery to draw attention to the bee — and to the need to protect it. The world's largest bee faces potential risks that range from insect collectors to the loss of its habitat from palm oil operations and other activity.

Gibbs agrees with the idea that bringing more attention to Wallace's giant bee might help protect it. He also says there was a flurry of interest last year, when a single specimen fetched a price of more than $9,000 on eBay.

"Despite an abundance of potential nesting sites, the bee appears to be rare," Messer wrote of his rediscovery in the 1980s. "Local informants had never seen the bee prior to its rediscovery, although a specific folk epithet, o ofungu ma koana, 'king bee,' is based on it."

As has been the case with other historical perceptions about bees, the king bee turned out to be a queen: The females are far larger than the males, which measure less than one inch in length.