Accessibility links
Robert Mueller Investigation: What Might Happen When It's Done The special counsel may be close to wrapping up. Or he may not. He could file a landmark report. Or he may not. The rules are limited, and the attorney general has a lot of discretion. 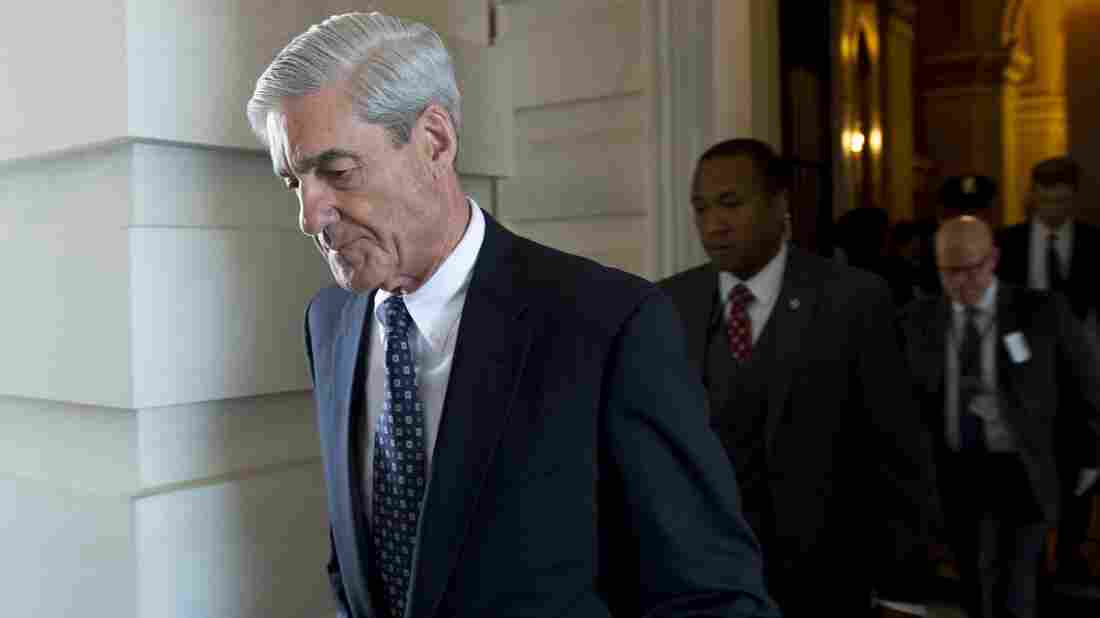 Special counsel Robert Mueller, who has been investigating Russian interference in the 2016 election, is working on a report of his findings. But what form that will take and how much the public will learn is unclear. Saul Loeb/AFP/Getty Images hide caption 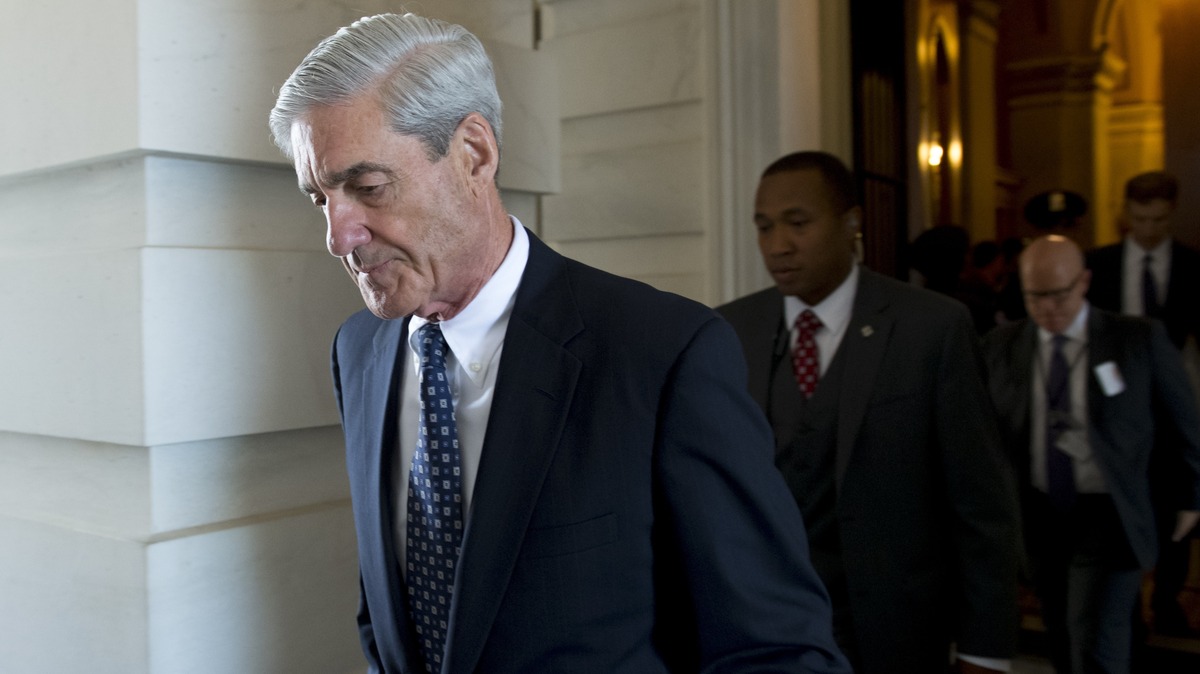 Special counsel Robert Mueller, who has been investigating Russian interference in the 2016 election, is working on a report of his findings. But what form that will take and how much the public will learn is unclear.

The Russia investigation could be on the verge of a spectacular finale — or it could be about to puff out like a damp firecracker.

Or, as has been the case so often before, Washington could be gearing itself up for a fireworks display that doesn't even happen. Despite some indications that special counsel Robert Mueller could be wrapping up, there has been no official word from the Justice Department confirming that's so.

But the prospect for the end of the Russia investigation, or at least the end of this phase, has resurrected many questions about where the story stands and what could happen next.

What is Mueller investigating?

Deputy Attorney General Rod Rosenstein appointed Mueller in the spring of 2017 to establish whether there were any links or coordination between President Trump's campaign and the Russians who attacked the 2016 presidential election.

That there was an attack is no longer in dispute, and Mueller has shed a great deal of light upon it.

The Justice Department has charged Russian intelligence officers with allegedly launching cyberattacks against U.S. political targets and stealing embarrassing material and then releasing it to cause havoc.

Other Russians have been charged with using social media agitation to amplify controversy inside the United States and to pit Americans against one another.

Investigators also appear to have established that Russians or their intermediaries were in contact with a number of Americans in Trump's orbit. Some of them offered help or to build backchannel relationships.

The president goes back and forth about what he accepts about Russia's election interference, but he has been consistent about calling the Mueller investigation a "hoax" or a "witch hunt," part of a conspiracy by disgruntled Justice Department insiders who are out to get him.

Trump says he didn't know in 2016, for example, that Russians were making overtures to people on his campaign, including one that resulted in a delegation meeting at Trump Tower with Trump's son Donald Trump Jr., his son-in-law, Jared Kushner, and his then-campaign chairman, Paul Manafort.

Skeptics argue it's implausible that Trump couldn't have known about the Russian outreach, including that meeting, and have pointed to the fact that one month after it took place, Trump asked Russia — "if you're listening" — to try to locate Democratic candidate Hillary Clinton's missing emails.

Mueller's investigators have since established that Russian hackers redoubled their cyberattacks against Clinton that very day. So far it isn't clear whether there was any connection to Trump's comments or whether there were other ties with Trump.

When could we learn whether there was a connection?

There's no official word as to when the special counsel's office may conclude its work and, if it does, whether it might release findings other than those that have been included in the public court cases.

Correct — and there might not even be a "report."

The Justice Department's regulations call for Mueller's office to give the attorney general a "confidential" report when he completes his work, but new Attorney General William Barr doesn't have to release it.

Other regulations call upon Barr to make certain notices to the House and Senate judiciary committees, but not for Barr to give them, or the public, the work product from Mueller.

Barr has said he supports the idea of making public a report from Mueller's office, consistent with regulations and the law. Democrats say they worry about Barr not making an unconditional commitment to release something.

There are proposals for Congress to pass legislation that would mandate that something goes out from the special counsel's office, but they haven't become law.

He may not view that as his job — he's a former FBI director and a prosecutor. Mueller wasn't asked to write a narrative about the events of 2016 in the way that the 9/11 Commission was, for example. Mueller has a law enforcement perspective:

He looks for whether there's evidence that a law was broken.

Along the way, he has also revealed a great deal about Russia's influence campaigns against the United States, although not in a very user-friendly way: Everything has been in wooden indictments or court documents, with no easy-to-follow storyline from start to finish or aids such as charts or graphics.

All the same, the court documents are public, and Mueller and the Justice Department may feel they're sufficient to get out the information they believe should be public.

Will there be a press conference?

Barr hasn't scheduled one, but he could. He and other leaders in the Justice Department are sensitive, however, about the criticism that was leveled against then-FBI Director James Comey and the FBI in 2016 when Comey announced he would not recommend charges against Clinton.

"If you're not going to indict someone, then you don't stand up there and unload negative information about the person," Barr said in January. "That's not the way the Department of Justice does business."

That may mean that Barr could simply announce that Mueller's work is complete but not entertain questions as to why Mueller decided not to charge certain people who've apparently been part of the Russia imbroglio.

One aspect of the investigation that regulations specifically call for Barr to address with Congress is whether he, or potentially, one of his predecessors, turned down a request from Mueller for something.

If the special counsel's office asked for authorization to try to subpoena someone, for example, and the leadership said no, Barr could communicate that to the House and Senate judiciary committees.

If Mueller concludes his work, does that mean the investigations into Trump are over?

No. The special counsel's office has partnered with other important parts of the Justice Department, including the U.S. Attorney's offices in Manhattan, Washington, D.C., and Alexandria, Va. Cases underway could go forward under the auspices of those prosecutors.

The prosecution of political consultant Roger Stone, for example, is being handled by the Washington, D.C., office.

An investigation into Trump's inaugural committee is underway in the Southern and Eastern districts of New York. Former national security adviser Mike Flynn, who has been cooperating with the government, may serve as a witness for the prosecution in a case against his former business partners in Alexandria.

Members of Congress also are continuing their investigations of Trump.

The House and Senate intelligence committees are working on their own Russia investigations — although they likely do not have access to the same wealth of witnesses or material as Mueller does — and other panels, including the House oversight committee, also want to look into Trump's finances and other matters.

What will Congress do?

If Barr or Mueller announce an end to the special counsel investigation, the next venue in this drama could be in Capitol Hill, but it's difficult to know what might happen without knowing what Mueller plans to do.

In an extreme scenario, Mueller could write that he has uncovered evidence of serious wrongdoing that includes Trump, setting the table for a debate over impeachment by the House Judiciary Committee, led by Chairman Jerry Nadler, D-N.Y.

Mueller also could give the president an important shot in the arm if the special counsel's findings dissipate the Russia cloud that has been looming over the White House.

Or if Mueller does something in between — or he or the Justice Department complete a document they want to keep from becoming public — that could set up a political battle.

If members of Congress get a classified report that they're asked to keep secret, for example, they might duel over whether to release it. Or if the Justice Department completes something it doesn't even want to give to Congress, lawmakers might vie over whether to compel Barr to reveal it.

Mueller and his staff members also might become the most sought-after witnesses for a congressional hearing since Comey. There could be a separate disagreement about whether they actually appear.

The political stakes, as they have been since the beginning of the Russia investigation, couldn't be higher.