Accessibility links
Duke Ellington's 'Black, Brown And Beige' Set A Tone For Black Protest He called it "a parallel to the history of the American Negro." Duke Ellington's Black, Brown and Beige wasn't an immediate hit, but it set a tone for ambitious, provocative works about black life. 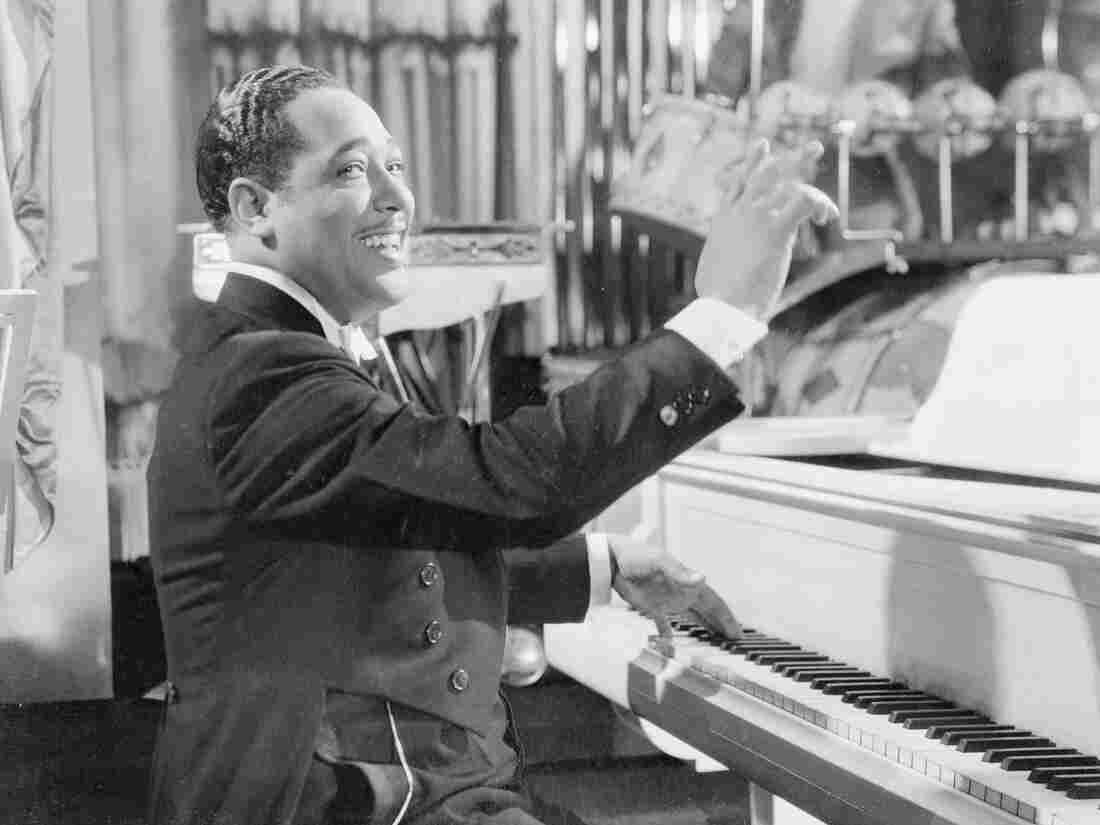 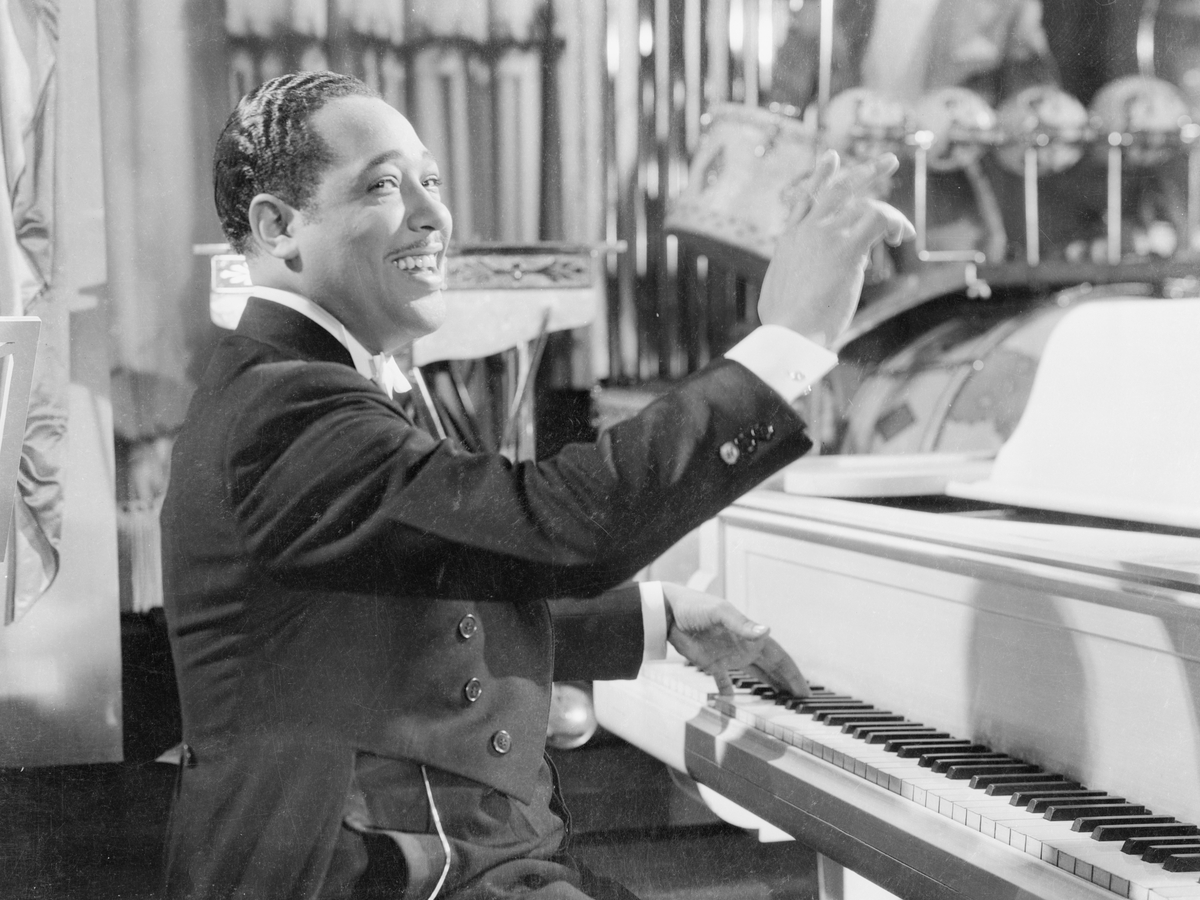 Duke Ellington at the piano, circa 1940.

What makes a jazz anthem? NPR's American Anthem series has spanned pop, rock, folk and more, but in most cases the songs are catchy, sing-at-the-top-of-your-lungs hits we all know and love. Less obvious is how an anthem grows out of a genre that is primarily instrumental and rarely crosses over into the pop charts these days. Luckily, we have an expert to help us figure it out.

"There's a lot of songs that I think the novice jazz listener could really latch onto in terms of its intensity of melody, its intent, and the story behind the piece," says bassist and composer Christian McBride, who hosts NPR's Jazz Night in America. But rather than choose an obvious standard, McBride pointed to something more ambitious: a massive, sprawling, three-movement suite by Duke Ellington called Black, Brown and Beige.

Introducing the piece at Carnegie Hall in 1943, Ellington announced to the mostly white audience, "We would like to say that this is a parallel to the history of the American Negro. And of course, it tells a long story."

For this installment of American Anthem, McBride joined Audie Cornish on All Things Considered to discuss the power of putting a work about black life before that crowd at that time — and how the section called "Come Sunday" became an anthem unto itself, eventually growing into a hymn for the civil rights movement. Hear the radio version at the audio link, and read an edited transcript below.

Audie Cornish: The title Black, Brown and Beige refers to three movements of a suite, and each one represents a period in black history: "black" being the lives of slaves; "brown" I understand [as] emancipation and service in American wars; and "beige" is when he was taking on contemporary black America at that time.

As a composer, when you listen to this piece — starting with the opening section, "Work Song" — what are you hearing?

Christian McBride: Just the way the textures build, the way the melody builds. The sort of sophisticated harmony: It's not just dominant seventh chords or triads, you get these flat nines, these flat 13s, these superimposed chords. That was just not standard.

I read press reports that said the crowd at that Carnegie Hall performance included Eleanor Roosevelt, Count Basie and Frank Sinatra. This was supposed to be a big revelatory moment from Ellington. But it also, in the end, got really mixed reviews. Can you talk about what people expected from him and why this somehow didn't meet expectations?

I think it's fair to say that particularly someone like Duke Ellington would expect mixed reviews. First of all, you have an African-American bandleader and composer playing a piece about a "parallel to the history of the American Negro" in 1943 at Carnegie Hall. That alone might get you a couple of bad reviews before you even play a note.

I think there were a lot of critics who sort of deem themselves experts on "fine music" — you know, classical music. So when you have this African-American composer using timpani, violins, but mixing it with swing rhythms, African rhythms — you mix all this together, and I'm sure a lot of reviewers had no idea what they were listening to. How do you write about something you don't know about?

So if Ellington's work is trying to tell a story, what of the story are we hearing in the "Come Sunday" section? How have you come to think of this moment in the music?

One thing that's always been important to the history of of black folks in America is the church, and Duke Ellington also wrote a lot of sacred music. So I think "Come Sunday" was his musical portrait of what the Gospel meant to the African-American community.

I guess it's fitting, then, that some 15 years later there is a new recording of this song, and he brings in Mahalia Jackson.

A titan and a titan together. In 1958, when this album was recorded, I think it's safe to say that there was no more powerful of a voice in the gospel world than Mahalia Jackson.

It's also important to remember, you didn't find gospel artists collaborating with jazz artists. Culturally, that was too stark a line to cross: There was a contingent of gospel artists or church people who still thought jazz is secular music, music that is not of the church. So I think it says something to the power and majesty of Duke Ellington's musicality to be able to have this singular artist of another so-called "genre" to say, "I don't usually do this, but this music is so powerful. I want to help further this artistry, the majesty of this song."

The next decade saw this explosion of music that did address political and racial issues in America. Heading into the '60s, we have "A Change Is Gonna Come" by Sam Cooke. "We Shall Overcome" becomes an anthem of the civil rights movement. So where did Black, Brown and Beige fit into this new, politically aware musical landscape? Or was it forgotten?

It's interesting because, also that same year, you had Sonny Rollins, who recorded the Freedom Suite. In 1960, you had Max Roach recording We Insist!, the "Freedom Now Suite." So there was a younger generation that was much more direct in their message; the message got much more visceral.

Duke Ellington tended to use metaphor. He was always very poetic in the way he expressed the joys, the pains, the sorrows and the hopes of the black community. But the younger musicians like Sonny and Max Roach, they always tip their cap to Ellington, because they know that Duke Ellington really did set the tone for what's known as protest music.