Accessibility links
Turpins Plead Guilty In Abuse Case Involving Their 12 Children David and Louise Turpin face 25 years to life behind bars in an abuse case the DA said was "among the worst ... ever seen." It included charges of starving and shackling children to furniture. 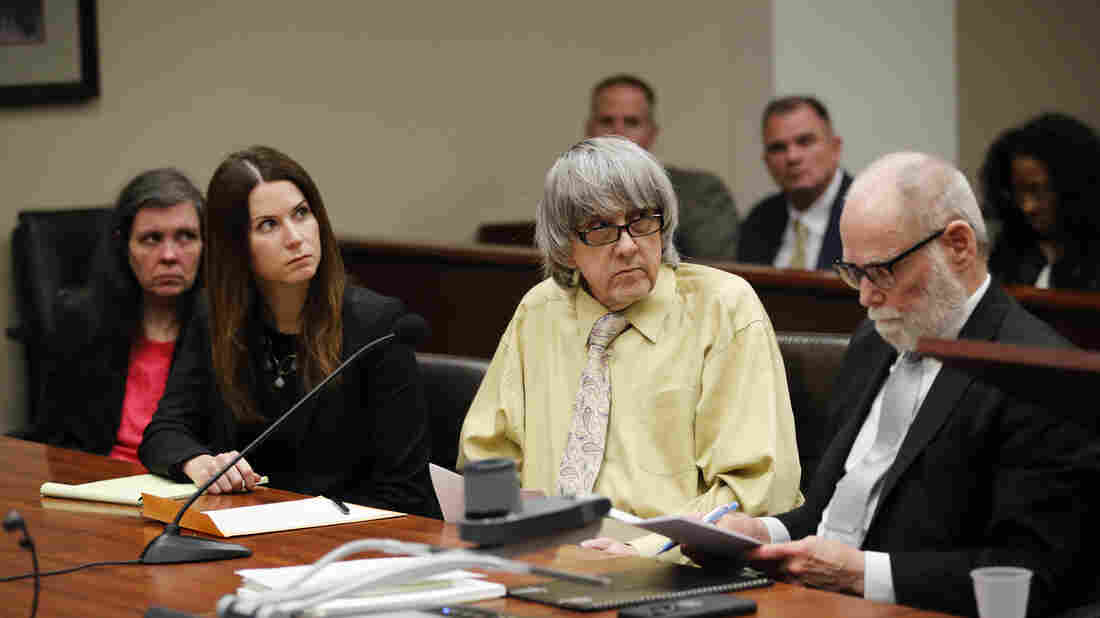 David Turpin (second from right) and his wife, Louise (far left), joined by their attorneys, pleaded guilty in a Riverside, Calif., courtroom, Friday to 14 counts, including torture, after some of their 13 children were found shackled to beds. Jae C. Hong/AP hide caption 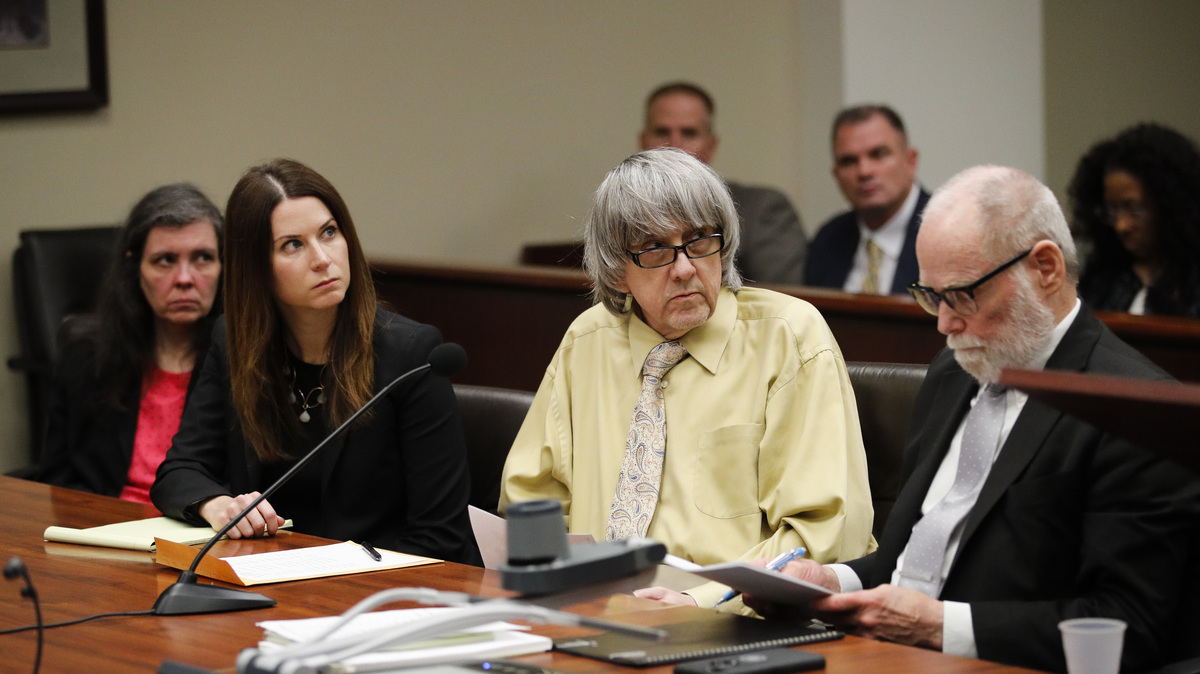 David Turpin (second from right) and his wife, Louise (far left), joined by their attorneys, pleaded guilty in a Riverside, Calif., courtroom, Friday to 14 counts, including torture, after some of their 13 children were found shackled to beds.

Seated in a Riverside County, Calif., courtroom on Friday, David Turpin, 57, and Louise Turpin, 50, pleaded guilty to 14 counts related to crimes against 12 of their children, in a case that captured worldwide attention for its levels of depravity.

Each parent pleaded guilty to one count of torture, four counts of false imprisonment, six counts of cruelty to an adult dependent and three counts of willful child cruelty, according to Riverside County District Attorney Mike Hestrin.

The children's ordeal came to light in January 2018 when a daughter managed to slip out of their Perris, Calif., house and, using a deactivated cellphone, call 911. Responding officers found "several children shackled to their beds with chains and padlocks in dark and foul-smelling surroundings," according to the Riverside Sheriff's Department.

David and Louise Turpin have just pled guilty to each of the 14 counts, including one count of torture.

Their parents were arrested and after Friday's plea face prison terms of 25 years to life; sentencing is scheduled for April 19.

"The defendants ruined lives. So I think it's just and fair that the sentence be equivalent to first-degree murder," Hestrin said at a news conference Friday.

Hestrin said he has spoken to the children, "and they all are relieved to know this case has been resolved. The defendants in this case essentially accepted the maximum punishment under current California law."

The Turpins had originally pleaded not guilty, but switching to guilty allows them to avoid trial. Hestrin said part of the reason prosecutors were amenable to the idea is that they did not want to put the children through the ordeal of testifying. He said, "We decided that the victims have endured enough torture and abuse" in what he described as "among the worst, most aggravated child abuse cases that I have ever seen."

'This Is Depraved Conduct': Couple Charged With Torture After Kids Found Shackled

Over a period of eight years and a move from Texas to California, the family evaded police attention, home-schooling the children and maintaining a neat enough home exterior, authorities said. But inside, the children were deprived of food, allowed to shower no more than once a year, beaten, strangled or tied up "for weeks or even months at a time," Hestrin said last year.

The children were so malnourished that their growth was apparently stunted. Police thought the girl who had sought help was 10; she was actually 17. The siblings were ages 2 to 29 at the time and police were "shocked" that seven were actually adults.

"Several of the victims have cognitive impairment and neuropathy — which is nerve damage — as a result of this extreme and prolonged physical abuse," Hestrin said last year.

There are 13 children, but the charges relate to 12 of them because a judge had earlier ruled that the youngest was the only one spared of abuse. They now range from 3 to 30 years old, according to The Associated Press.

Hestrin said after meeting with them, he was struck by the optimism they display about their futures: "They have a zest for life and huge smiles."