Accessibility links
Book Review: 'The White Book,' By Han Kang Han Kang's new novel isn't quite a novel — it's a gorgeous, hard-to-categorize series of reflections, themed around the color white, on grief, mourning and what it means to remember those we've lost. 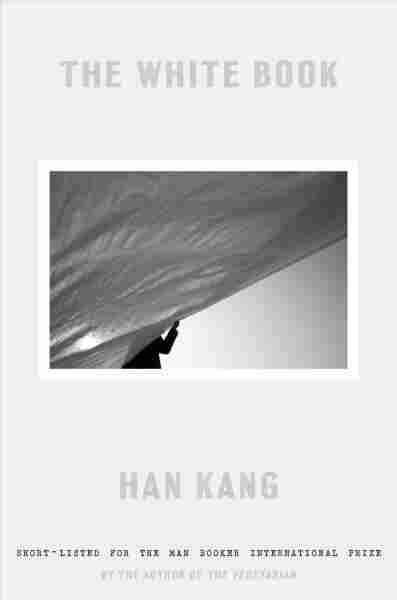 Han Kang has been a familiar name to Korean readers for two decades, but it's only recently that English-speaking audiences have been able to read her work. She made her major American debut in 2016, when the English translation of her novel The Vegetarian was released in the States; the horrifying story of a woman who comes undone after giving up meat became an unlikely breakout hit. A year later, her novel Human Acts followed; while the subject matter wasn't similar to The Vegetarian, the critical praise it received was.

The latest of Han's novels to be translated into English, The White Book, has almost nothing in common with its predecessors except for its stunningly beautiful writing and its preoccupation with mortality. It's a book that defies genre and challenges the reader to make sense of its unusual structure. The White Book isn't likely to appeal to fans of the traditional novel, but will reward readers with a taste for more unconventional narratives.

The White Book begins with a list of 15 things associated with the color white: a newborn baby's gown, snow, rice, blank paper, and more. "With each item I wrote down, a ripple of agitation ran through me," the narrator explains. "I felt that yes, I needed to write this book and that the process of writing it would be transformative, would itself transform into something like white ointment applied to a swelling, like gauze laid over a wound. Something I needed."

The narrator, the reader learns, is a Korean writer living temporarily in a snow-covered European city. Lately, she's become preoccupied with thoughts of her older sister, who died hours after being born: "The most helpless of all young animals. Pretty little baby, white as a moon-shaped rice cake. How I'd been born and raised in the place of that death." The city, one which was nearly destroyed by the Nazis during World War II, inspires in the narrator thoughts of death and rebirth.

The White Book is broken into several small chapters, most named after a white object, all related in some way to the narrator's family or the city she has found herself in. A chapter named after breast milk takes just seven sentences to recount the narrator's bereaved mother, a day after the death of her baby girl, squeezing out a stream of milk that won't be used to nourish anyone. In "Blizzard," the narrator remembers being stuck in a snowstorm in Seoul years ago, "unable to fathom what on earth it could be, this thing so cold, so hostile. This vanishing fragility, this oppressive weight of beauty."

There's no real plot to The White Book; in lieu of a storyline, Han presents a series of brief reflections on grief and the challenges of mourning a family member you've never met. At times, it seems like more like a poetry collection than anything else — some of the chapters contain line breaks, a technique that Han uses quite effectively to catch the reader off guard. Han's fixation on one color and the topic of loss brings to mind Maggie Nelson's 2009 Bluets, a book that also stubbornly defied genre classification, though the two books use very different approaches.

'The White Book' is a novel that's difficult to describe, but easy to love. It's a delicate book, hard to know, impossible to pin down, but it's filled with some of Han's best writing to date.

But trying to tease out what kind of work The White Book is seems almost beside the point — Han's writing, and the translation by Deborah Smith, is so delicate and gorgeous, it seems a waste of time to try to pigeonhole it into any genre. Here's how Han describes an assortment of laundry accidentally dropped from a balcony: "A single handkerchief drifted down, slowest of all, finally to the ground. Like a bird with its wings half furled. Like a soul tentatively sounding out a place it might alight." Han finds an oblique beauty in each object she considers; the reader is tempted to read each chapter over and over again as soon as it ends.

Han is at her haunting best when the narrator considers the sister she never got to know, and how her absence became something like another family member itself. The narrator reflects that if her sister had lived, she might never have been born: "This life needed only one of us to live it. If you had lived beyond those first few hours, I would not be living now. My life means yours is impossible."

The White Book is a novel that's difficult to describe, but easy to love. It's a delicate book, hard to know, impossible to pin down, but it's filled with some of Han's best writing to date. And it's also one of the smartest reflections on what it means to remember those we've lost. "There are certain memories that remain inviolate to the ravages of time. And to those of suffering," Han writes. "It is not true that everything is colored by time and suffering. It is not true that they bring everything to ruin."