Accessibility links
Oscars Recap: 'Green Book' And 'Bohemian Rhapsody' Win Big, And Lady Gaga Sings Sunday night's Oscars were the first in a long while to go without a host. It didn't stop the accolades from coming, though, and the kinda sorta part-true Green Book won best picture.

With No Host Directing Traffic, 'Green Book' Drives Away With Best Picture

With No Host Directing Traffic, 'Green Book' Drives Away With Best Picture 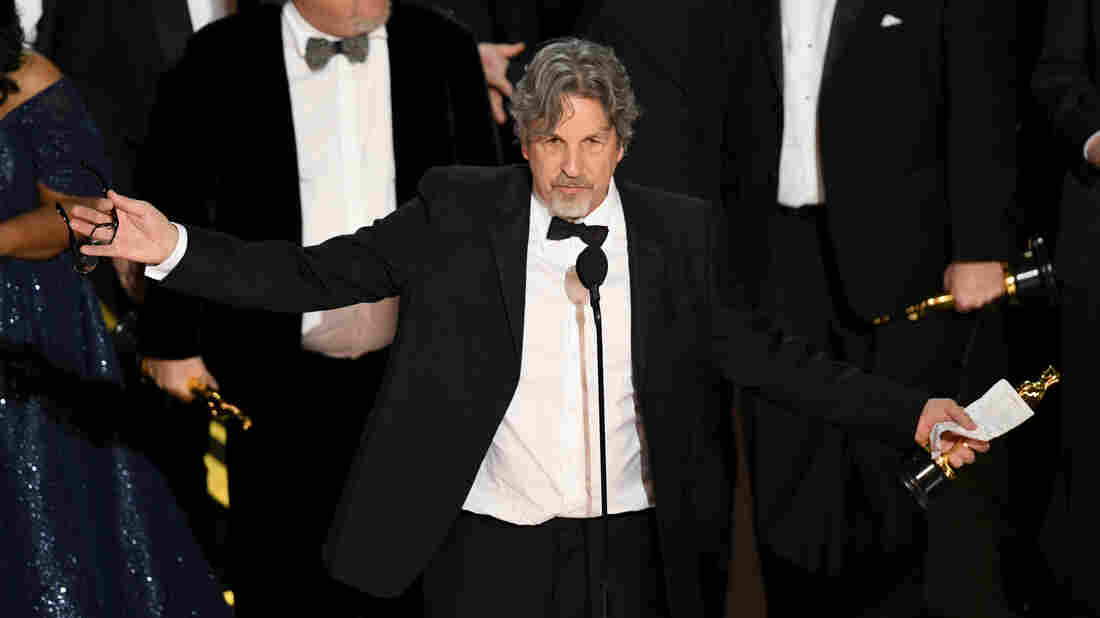 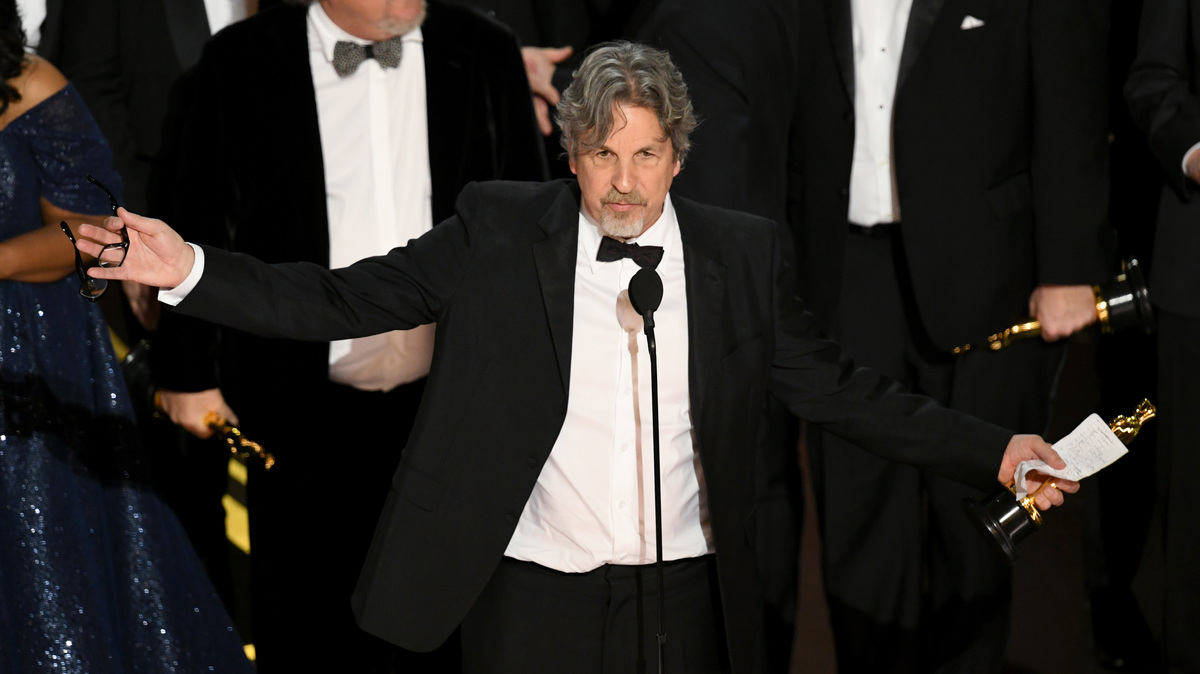 It turns out the Oscars telecast doesn't need a host.

Sure, the headline coming out of Sunday's Oscars is that Green Book and Bohemian Rhapsody were big winners — Green Book won three including best picture, and Bohemian Rhapsody won four including best actor for Rami Malek. (That despite the fact that both films had decidedly mixed reviews.) That Bohemian Rhapsody's credited director, Bryan Singer — fired part of the way through filming — has been accused of a wide range of sexual misconduct seemed to bother the voters not at all. In fact, no one even mentioned Singer. It was as if the film had not been directed by anyone at all, so neatly was he excised from the story of the film's baffling march to the Oscars.

Roma, representing Netflix in its continuing bid to get into serious filmmaking, also did well, scoring major wins for foreign-language film and both best cinematography and best director for Alfonso Cuarón.

But the other headline is that the ceremony had no host, proved not to need one and wasn't wildly overlong. It had minimal filler and some pleasant musical performances, and even was legitimately funny now and then. Granted, it looked in the weeks leading up to the ceremony like everything was falling apart: Original host Kevin Hart backed out, they scrapped a plan not to offer up the nominated songs, they scrapped a plan to shuttle four awards off to be handed out during the commercials, and in the end ... the show was pretty good. It turns out that most of what you lose without hosts is the flopsweaty self-indulgent host bits that aren't funny anyway.

The closest thing to hosting came from Maya Rudolph, Tina Fey and Amy Poehler. They appeared early, following the opening performance by Queen (which is now fronted by Adam Lambert, who certainly does his best). The three women were funny and charming, somehow both hosting and making fun of hosting for just those few minutes. Remember, Fey and Poehler got great reviews as the hosts of the Golden Globes a few years ago, so perhaps they, and Rudolph, should simply host anything for which they're at all appropriate for a while. Maybe they're the ones who have cracked the secret code.

2019 Oscars Recap: The Highs And Lows

Other than the awards, there really wasn't a lot to the broadcast except the musical performances, which were probably highlighted by the preordained best song winner, "Shallow" from A Star Is Born. It was destined to win since the film's trailer popped up and was performed live by Lady Gaga and Bradley Cooper. (Kendrick Lamar and SZA did not appear to perform "All The Stars" from Black Panther, which probably would have been the show's best opportunity to grab the younger viewers it always claims to be courting.) "Shallow" it always was to be, and "Shallow" it was. Welcome to the fold, Oscar-winner Lady Gaga.

The funny thing is that while this ceremony was blessedly short on dumb montages and stunts such as handing out food to the audience, that put the focus on the awards themselves. So it was a ceremony that will look very different to you depending on how you liked the most-rewarded films — Green Book and Bohemian Rhapsody especially, but Roma too.

Some presentations dodged the more divisive films and offered fairly noncontroversial, delightful moments: Regina King won her well-deserved first Oscar for her supporting role in If Beale Street Could Talk. Black Panther's costume designer Ruth Carter and production designer Hannah Beachler both won for their work on the stunning look of Wakanda. And even if you don't like Green Book, Mahershala Ali was certainly the best thing about it, and he won for best supporting actor.

In best actress, Glenn Close was expected to win her first Oscar (on her seventh nomination) for The Wife, but Olivia Colman won for The Favourite, the only award the Yorgos Lanthimos film received all evening. While it was hard not to feel for Close, Colman is an extraordinarily charming deliverer of acceptance speeches, and her performance in the film is certainly an indelible one.

There were more firsts: Spider-Man: Into The Spider-Verse was the best entrant in the animated feature category, hands down, and its win felt like a blow for experimentation and inclusion within money-making genres where both are sometimes neglected. Its director, Peter Ramsey, is the first black director ever to win in the category. 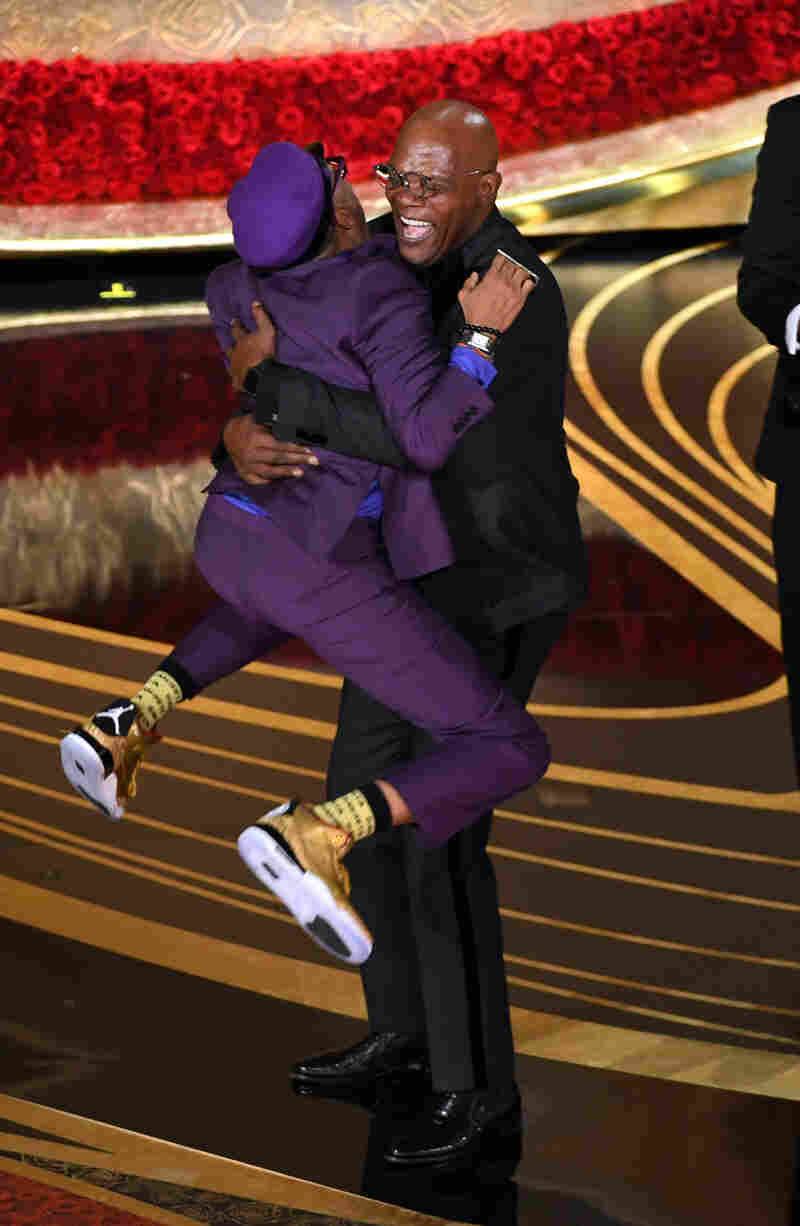 It was satisfying to watch Spike Lee win for best adapted screenplay for BlacKkKlansman after previously only having an honorary Oscar on his shelf. Lee hands out his scowls generously and his giddiness carefully, so what a pleasure to see him leap into the arms of presenter and past collaborator Samuel L. Jackson in the night's best visual. And speaking of celebrated directors, Cuarón's Roma won best foreign language film, giving Netflix its first-ever win outside the documentary categories. Cuarón also won for best director, certainly the first win for a narrative feature film primarily produced for at-home streaming. (This is not an exhaustive list of winners; that list is here.)

But beyond these, it is almost impossible to separate the question of who won from the experience of watching the show. It all feels more personal than usual, in that it's more based on which films you liked. To me, a lot of the big awards went to films that won't age well: Green Book will likely be regarded as an exceptionally weak best picture winner in years to come, not to mention all those awards for the aggressively mediocre Bohemian Rhapsody, which uses the music of Queen to compensate for barely being a coherent film.

Moreover, both films are thoroughly retrograde, offering visions of, respectively, queerness and race that seem ripped from about 1993. (Seeing Rep. John Lewis introduce Green Book was telling; he spoke about the time in history and about the ongoing struggle for racial justice, but not very much about the movie.) With every year, both films will look worse, so if there is a savage but honest consolation to those disappointed by Green Book's beating out better nominated (and not-nominated) films for best picture, it's that Sunday night was the beginning of its long life as a notoriously questionable winner. (The filmmakers deserve a fruit basket from the team that made Crash for taking some of the pressure off.)

That favoring of all things safe and standard and neat soured the awards for me, partly because there was so little else for the show to hide behind. There was no host to have an opinion of that — which had nothing to do with who won and who lost. A tighter show is, by definition, more winner-driven. Here, if you're a Bohemian Rhapsody or Green Book partisan, these awards were probably right up your alley. But if you are me, they were not.