Accessibility links
'Nicolás Maduro Must Go,' Pence Says After Violence Over Venezuela Aid Shipments "The struggle in Venezuela is between dictatorship and democracy," U.S. Vice President Pence said in Colombia. He was there to support Juan Guaidó, who has declared himself Venezuela's interim leader. 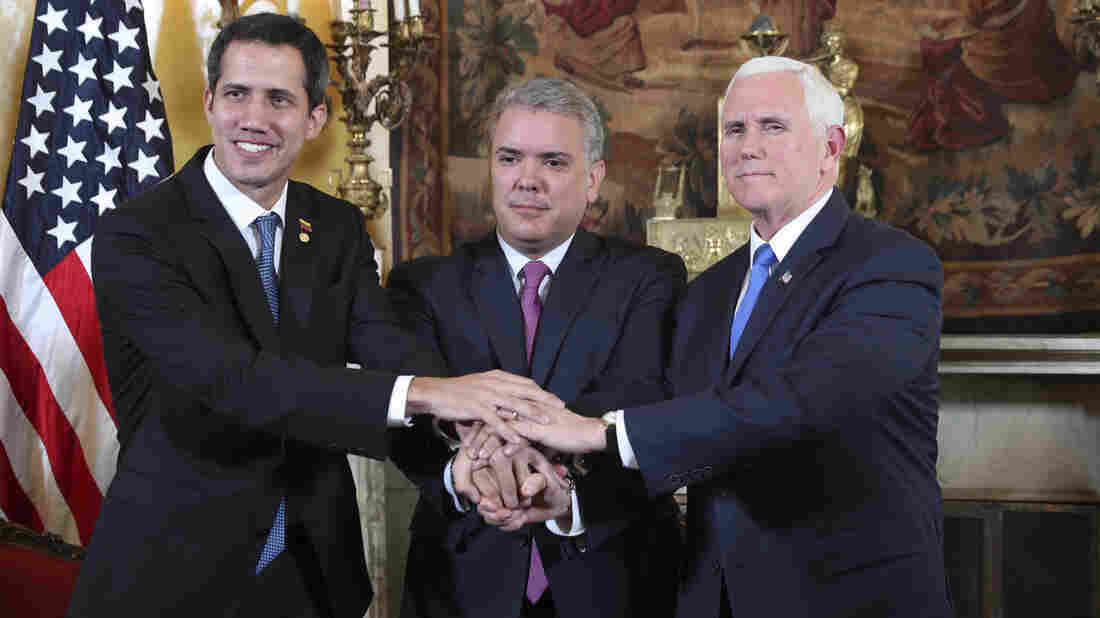 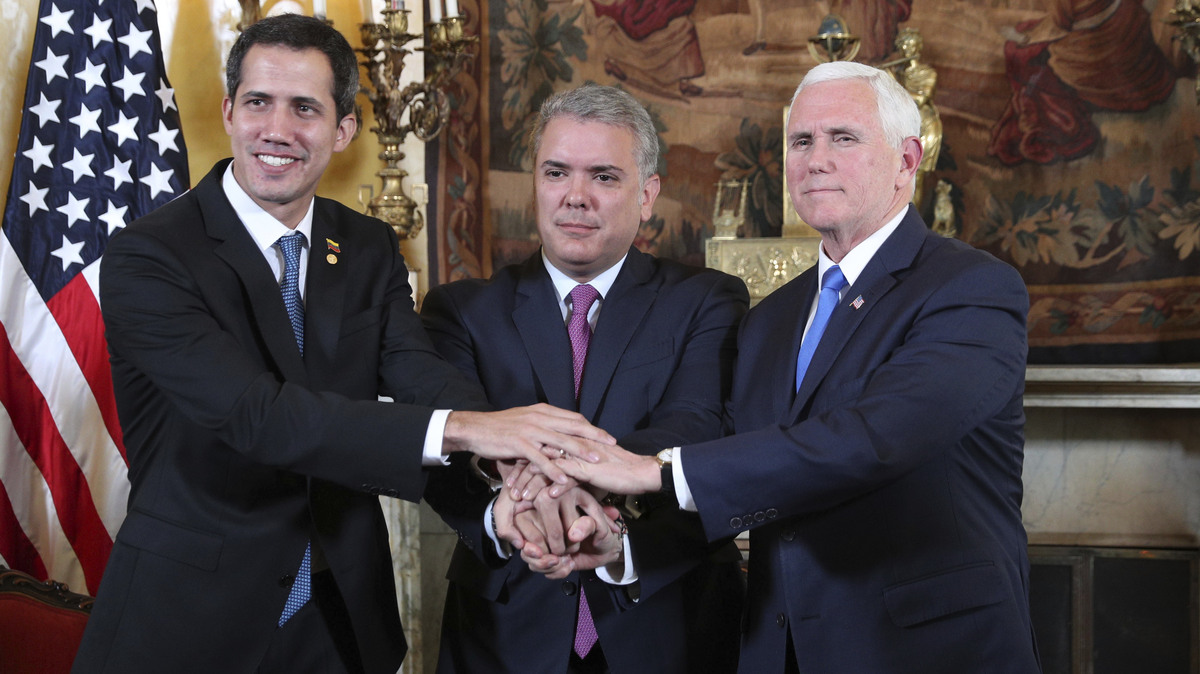 Vice President Pence traveled to Bogotá, Colombia, on Monday and urged regional leaders to support Juan Guaidó, the self-proclaimed interim president of Venezuela, vowing that the U.S. will stand with the opposition leader "until your libertad is restored."

Military forces have prevented most of the food and medicine from crossing the country's borders with Brazil and Colombia. Clashes with protesters and volunteers trying to unload truckloads of aid resulted in the deaths of least four people this weekend. Hundreds more were wounded.

Trucks carrying items were torched, amid tear gas fired by the military and attacks waged by paramilitary groups, as NPR has reported.

"Just days ago, as the world watched, the tyrant in Caracas danced as his henchmen burned truckloads of food and medicine, and murdered civilians," Pence said in remarks to members of the Lima Group, a coalition of nations formed to address the Venezuela turmoil.

Maduro's government, however, views the aid shipments as a pretext for foreign invasion.

Guaidó and other opposition leaders had hoped the aid would loosen Maduro's grip on the country. Under the socialist regime, the once prospering country has suffered massive inflation and well as shortages of food and medicine. Millions of desperate Venezuelans have fled the country.

If Maduro remains in charge of Venezuela, Pence said he expects it will result in two million more refugees.

Pence noted Monday that the U.S. has sent five military transport aircraft carrying 400 tons of food and medicine to Colombia and Brazil in the past two weeks — and that those efforts will only increase. New areas along Venezuela's borders, he said, are being identified to prepare for the delivery of additional aid.

The vice president said the U.S. has provided more than $139 million in aid to Venezuela's people, and will provide $56 million to support U.S. partners in the region.

In his speech, Pence also appealed to armed forces loyal to Maduro, echoing President Trump's recent warning that those who chose Maduro over Guaidó "will find no safe harbor, no easy exit and no way out. You will lose everything."

Nearly 200 members of the military have already defected, said Pence, who later met with dozens of families who had fled Venezuela.

He gave the Lima Group nations specific steps they should take to isolate and shun Maduro: immediately freeze the assets of PDVSA, Venezuela's state-owned oil company, and transfer ownership of Venezuelan assets from Maduro's government to Guaidó's.

The U.S. has already imposed sanctions on PDVSA and on officials with Maduro's government. The additional sanctions announced Monday, according to the Treasury Department, target "the Governors of four Venezuelan states involved in endemic corruption and in blocking the delivery of critical humanitarian aid, thereby exacerbating the ongoing humanitarian crisis caused by the illegitimate Maduro regime."

Pence said that "even stronger sanctions" will be announced in the days ahead "against the regime's corrupt financial networks." U.S. officials have repeatedly said that all options, including military action, are on the table to try to remove Maduro. 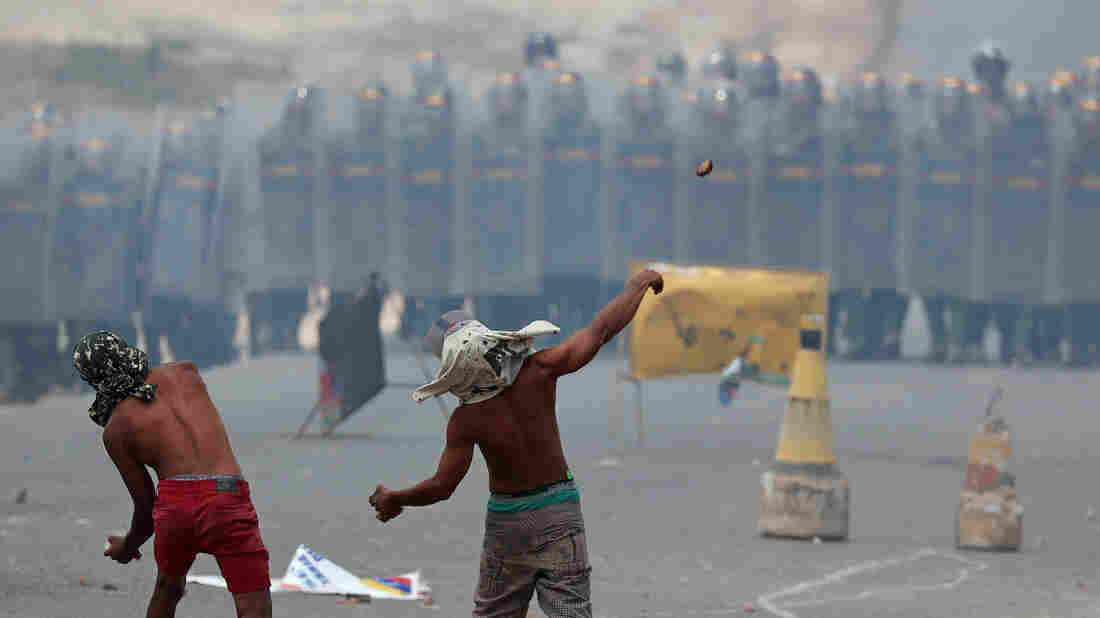 Demonstrators throw stones at a line of Venezuelan National Guard troops along Venezuela's border with Brazil, at the Brazilian city of Pacaraima on Sunday. Ricardo Moraes/Reuters hide caption 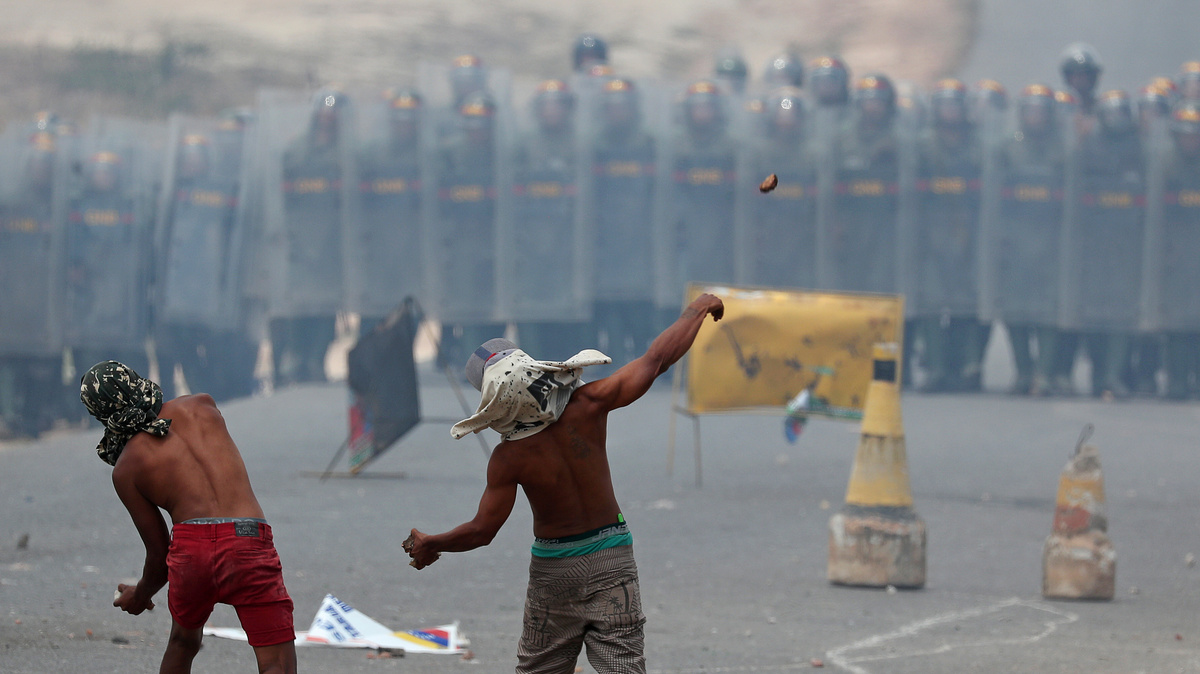 Demonstrators throw stones at a line of Venezuelan National Guard troops along Venezuela's border with Brazil, at the Brazilian city of Pacaraima on Sunday.

To attend Monday's meeting in Bogotá, Guaidó defied a travel ban that Maduro's government has imposed on him. He delivered a speech in which he thanked leaders for their support of Venezuela's democratic cause and humanitarian aid.

He then asked for a minute of silence to reflect on Saturday's brutality.

"You saw in one day how sadistic they were when they torched the medicines and food in front of people who are hungry, people in dire need of medicine. The entire world saw what Venezuela has been enduring for years," Guaidó said.

The 35-year-old opposition leader was recently elected head of Venezuela's National Assembly, and grabbed the world stage in January by taking the oath of office in Caracas and declaring himself interim president. His announcement was met by swift support from the United States and several other nations.

Maduro had recently been sworn in for a second term, and Guaidó argued that the presidential election was illegitimate, plagued by corruption and repression.

One local government worker told NPR that the unrest has left people tired and frustrated.

"If they tell us to be out on the streets for 30 days without eating to oust this government, we'd all be out there," said Carolina, who refused to give her last name for fear of losing her job. She added that impoverished Venezuelans have reached a breaking point but that the opposition was moving too slowly.