Accessibility links
'Separate' Is An Eye-Opening Journey Through Some Of America's Darkest Passages Author Steve Luxenberg repeatedly manages to tell us stories around Plessy v. Ferguson that capture both the hope and the hopelessness that has been central to America's long argument about race. 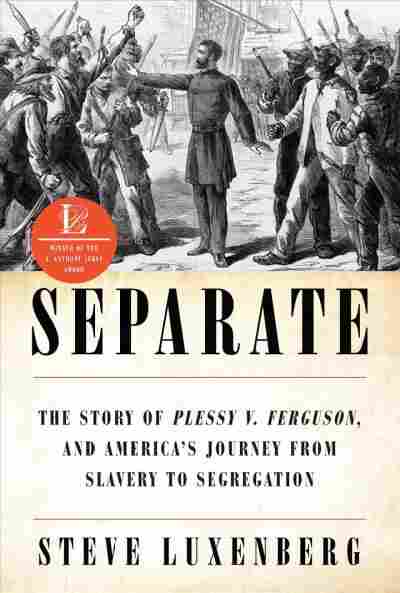 The Story of Plessy v. Ferguson, and America's Journey from Slavery to Segregation

Steve Luxenberg's storytelling mastery may be most evidenced by the fact that the big, sprawling swath of history he bites off in his new book — Separate: The Story of Plessy v. Ferguson, And America's Journey From Slavery to Segregation — does not read like a big, sprawling, swath of history.

The story feels neither distant nor lifeless, and Luxenberg's careful narrative choices creates a lucidity that saves save the book from ever feeling unwieldly, even at more than 600 pages.

The story is briskly told — and that is impressive, in part because this is not a biography with the advantage of a single protagonist to focus the narrative and drive the action. Instead, it is a book about a court decision, a landmark ruling of the Supreme Court, for sure, but one that was not at all surprising at the time. In many ways it is a story about defeat, and that is hard to make interesting on its own term.

But Separate lands as intimate, perfectly interlocking portraits of some of the men and women who lived through the abolitionist- and Reconstruction-era maelstrom, and it is a dazzlingly well-reported chronicle of an important period in our history.

Few of the key characters are well-known any more. There the novelist and civil rights crusader Albion W. Tourgée, who as the lead litigator in the Plessy case may have been a little over his head. But Luxenberg doesn't think the case was ever winnable. We meet Justice Henry Billings Brown, the Yalie who wrote the tortured 7-to-1 decision and Louis A. Martinet, head of the led the Citizens' Committee that led the effort to end the Separate Car Act. And, of course, Justice John Marshall Harlan, who wrote the foreboding dissent in Plessy.

The book is full of detail so rich that these players insist on their own veracity. We learn, for example, that John Harlan, who would go on to be the only dissenter in the case, got married at 9 p.m. two days before Christmas in 1856. He was 23 and his bride, Malvina "Mallie" Shanklin, was 17. He was from Kentucky, she from Indiana, and the couple honeymooned at her parents' house for several weeks before heading to Kentucky. Bad weather extended their stay, and sometime before they departed, Mallie's mother counseled her daughter on an approach to marriage. "You love this man well enough to marry him. Remember, now, his home is YOUR home; his people, YOUR people; his interests, YOUR interests — you must have no other." A singular kind of commitment.

But then Luxenberg writes: "Only upon Mallie's arrival at the Harlan homestead, did the full force of her mother's advice begin to register. She was presented with one more gift: her personal slave."

The gift of a slave in 1857 was from the family of the man who would stand alone in Plessy in 1896, chastising his fellow justices for their uncompromising embrace of white supremacy, in defiance of the Constitution. Some 40 years after his new bride got a slave as a present, Harlan wrote:

"In the eye of the law, there is in this country no superior, dominant, ruling class of citizens. There is no caste here. Our constitution is colorblind, and neither knows nor tolerates classes among citizens."

Luxenberg repeatedly manages to tell us stories that capture both the hope and the hopelessness that has been central to America's long argument about race.

Plessy remains a landmark piece of American jurisprudence and an important chapter in American history. Looked at from the vantage of 125 years hence, it stands as a mean-spirited, hollow, backward-looking event; intellectually dishonest and just plain wrong. Racist, would be a simple and accurate enough dismissal. In Plessy the Court ended up on the wrong side of history, and Harlan warned at the time that this would happen.

But Luxenberg sets himself the difficult task of making all that settled history interesting and new, and he pulls it off with distinction.

The story, in summary, is this: The Comité des Citoyens, a group of citizens in New Orleans led by editor Louis A. Martinet, engineered a challenge to Louisiana's Separate Car Act of 1890, which decreed that railroad companies must provide "equal but separate accommodations for white and colored races."

The Comité des Citoyens enlisted Homer Plessy as the ideal plaintiff to get arrested in 1892. He was by all outward appearances white — but was designated "colored" and, for the purpose of the case, was black enough to cause confusion, Luxenberg writes. The case reaches the Supreme Court and, in May of 1896, the court rules 7-1 that the Separate Car Act was constitutional, asserting that it did not violate either the 13th or 14th Amendments of the Constitution.

That decision laid the groundwork for a series of laws that would expand and preserve Jim Crow segregation throughout the American South for another 60 years, until it was reversed in public education by the ruling Brown v. Board of Education in 1954.

Today Plessy is routinely described as a landmark, and what we see in Separate is that it was more of a mile-marker; there is a long run-up and an equally long and consequential legacy.

The book ends in 1915, with the death of Henry Billings Brown, the Massachusetts-born, Yale-educated northerner, who wrote the majority opinion. And Luxenberg details how the case seeped into the American bloodstream leading in fits and starts to Brown v. Board.

But the better part of the book may be its chronicle of the 60 years leading up to Plessy, beginning with the fight to end railroad car segregation not in the slaveholding, or Reconstruction South, but in the North abolitionist stronghold of Massachusetts.

Plessy was a 7-1 ruling that never really had a chance of going the other way, but the loser that day would eventually triumph. Both the dissent and the dissenter are now held in much higher regard than the majority opinion or the Justice who wrote it: We remember Justice Harlan much more and much more kindly, than we do Justice Brown.

Still in Luxenberg's hands, Brown comes to life as a tentative, young man with poor eyesight, eager to please — at least his father — who grows into a man who worries about money and is plagued by eye problems all his life.

There is a moral clarity to Harlan that rings through the centuries:

"The thing to accomplish was, under the guise of giving equal accommodations for whites and blacks, to compel the latter to keep to themselves while traveling in railroad passenger coaches. No one would be so wanting in candor as to assert the contrary."

Then, as now, it is hard to have a direct and honest conversation about how race plays in our political and cultural lives.

There is a line in a T.S. Eliot poem that describes history as a kind of labyrinth: "History has many cunning passages, contrived corridors," Eliot wrote in Gerontion.

Separate is an eye-opening journey through some the darkest passages and haunting corridors of American history.