Accessibility links
Woman Unpacks Spotted Python In Scotland After Australia Trip The woman flew some 9,000 miles from Australia to Scotland to find her shoe was packed with a live spotted python inside, according to the Scottish SPCA.

Snake On A Plane: Unsuspecting Woman Traveling From Australia Brings A Passenger

Snake On A Plane: Unsuspecting Woman Traveling From Australia Brings A Passenger 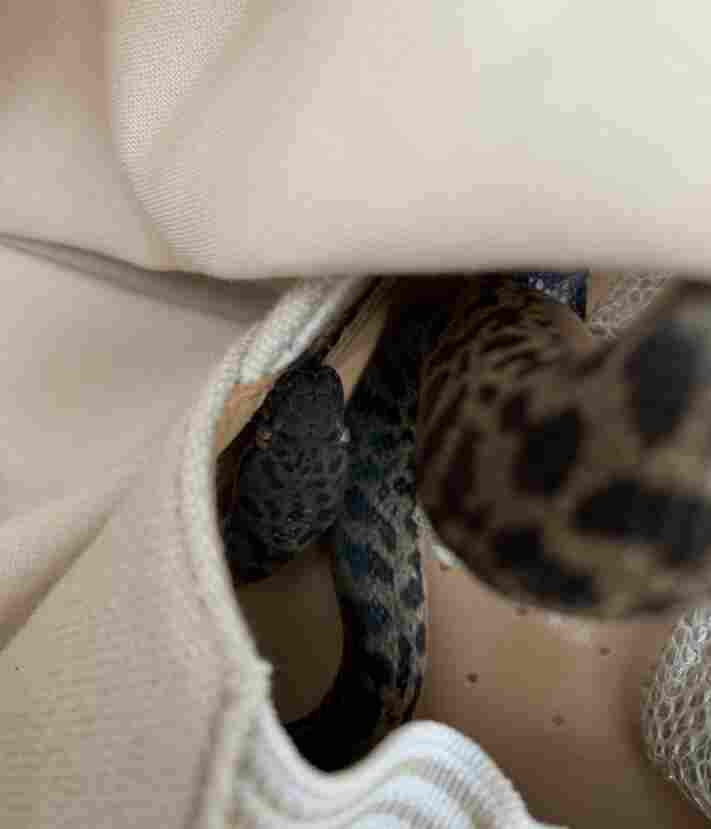 A woman unpacking in Scotland after vacationing in Australia found a snake inside her shoe. Scottish SPCA hide caption 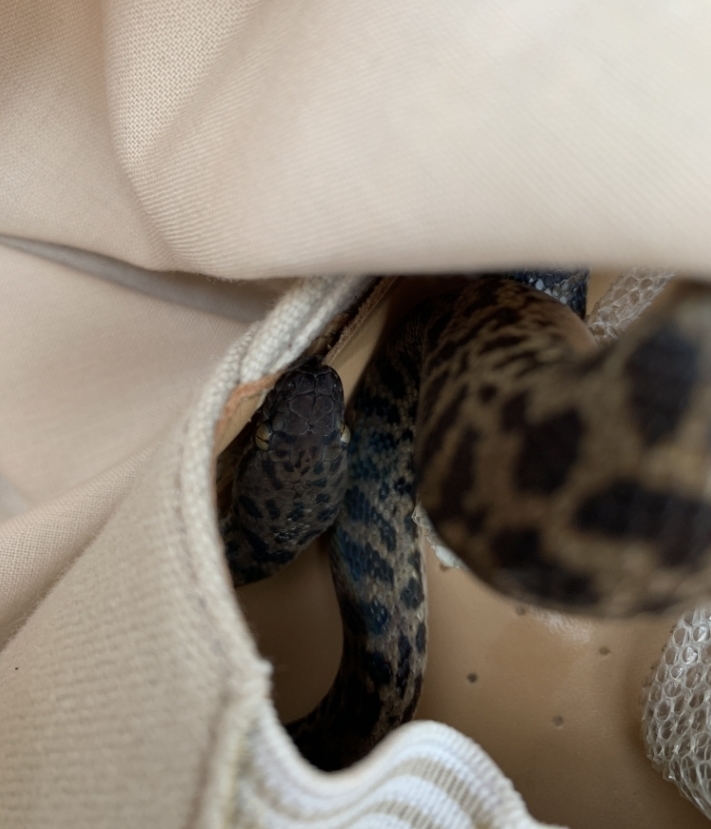 A woman unpacking in Scotland after vacationing in Australia found a snake inside her shoe.

A woman who had returned to Scotland after vacationing in Australia didn't know she had hauled home a serpentine stowaway, until she reached into her suitcase to unpack and encountered a snake coiled within a shoe, according to her family.

The Scottish SPCA, an animal welfare charity, confirmed to NPR in an email that one of its rescue officers recovered the snake at a property in Bridge of Allan, a town located about 30 miles northeast of Glasgow.

"When I arrived, the snake had been contained by the caller, so I safely removed the snake from the property," animal rescue officer Taylor Johnstone said in an emailed statement.

Upon examination, Johnstone said the snake was determined to be a spotted python, which is not venomous.

But how is it that the python wound up some 9,000 miles from its home down under?

Australia's ABC News spoke to the woman's son-in-law, Paul Airlie, who said she thought she had seen a snake slithering in her room in the middle of the night during a family visit in Mackay, a city on the east coast in Queensland, but a subsequent check yielded nothing.

A few days later, Airlie said, his wife, Sarah, helped her mother pack up, but little did they know the shoe placed in the suitcase contained an occupant to surprise the woman when she got home on Friday.

"She actually thought that Sarah and I had put a fake snake in her shoe to wind her up, so at first she thought it was a joke until she touched it and it moved," Airlie told the news outlet.

ABC News says the woman brought the shoe outside and covered it with a box until help showed up.

Australian Geographic calls Australia "a paradise for pythons," home to more than a dozen species. Spotted pythons are one of Australia's smallest pythons, notes the Australia Zoo, growing to a little more than 4 feet. They favor woodlands and shrubs as habitat. And despite their small size, they are known for ambush attacks on prey including small mammals, birds and lizards.

The Scottish SPCA says the Australian snake is now in quarantine at its animal re-homing center in Edinburgh.