Accessibility links
Interview: Boris Fishman, Author Of 'Savage Feast' Fishman's family came to the United States from Belarus in 1988; he writes that the hunger, terror and loss of World War II still shapes their attitudes towards food even after seven decades. 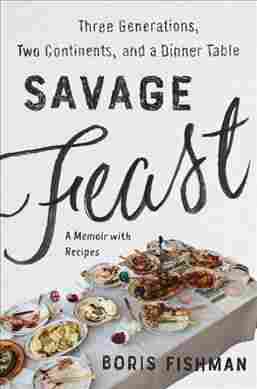 Boris Fishman was nine years old in 1988 when his family left Belarus for New York. As Jews in what was then the Soviet Union, their prospects were limited, and they lived under the constant threat of discrimination and violence. But his grandfather was resourceful, so, unlike other families, Fishman's did not lack for good food.

His new memoir, Savage Feast, layers family recipes into the stories; Fishman says his grandparents' attitudes toward food were shaped by the hunger and loss of World War II.

On his grandparents' experiences in the war

We're from Minsk; it was one of the first places invaded by the Nazis in June, 1941, and food disappeared. My grandmother was incarcerated in the Minsk ghetto for almost two years, she managed to escape right before it was liquidated and then spent two years wandering the swamps of Belarus, subsisting on potato peels, and that does something to a person's psyche ... I'm getting goose bumps right now thinking of it, even though I've thought of it a million times. The story of the first loaf of bread she saw after the war, she leapt on it like an animal, devoured it, and vomited it all back up. That is the formative food-related experience for me in New York in 2019, almost a century later ... it's amazing, 30 years after emigrating to the States, the degree to which we approach food as a resource that might vanish. We've not had to scrounge for a meal in over 70 years!

If American Airlines served things worthy of the palate, we perhaps wouldn't pack as many tin foil bundles as we do, but the fact is that they don't ... it all depends on what you cooked last night. Perhaps you went to the supermarket last night and they had some cod that was wild and properly sourced but also on sale, so you bought some of that. You might have taken a half hour to marinate it in some ungodly combination of spices, and then you just put it between two slices of bread, and then you just tin foil it up, and you grab a tomato that you can bite through like an apple, and you're good for at least 30 minutes that way.

On his grandfather's home aide, Oksana

She was the bridge, in every imaginable way. There are ways you can allow yourself to behave with family members that you cannot allow yourself to behave with people outside the family, and so I deferred to Oksana and listened to Oksana in ways that I was too young and too callow and too proud and too stubborn and too resentful — because I didn't feel understood by this man. She managed to understand that there would be a time when this man would not be a part of the world — which unfortunately is now — that I wasn't able to hear from him. And this is to say nothing about the meals that she put on the table between us. For the duration of those meals, our difficulties became harder to remember.

I, until a certain point in my life, had the same prejudice that many people do about ex-Soviet food, which is heavy, pale, spiceless — and then I ate from Oksana's table. And we're talking things like peppers marinated in buckwheat honey and garlic, duck stuffed with prunes and apricots, so many other things, so toothsome and not heavy at all, especially if prepared in the right way. But the one dish that sticks in my mind, I remember coming over to kind of an evening gathering in their home, and there was a pie in front of me, and I bit into it and it tasted like no other pie I'd ever tasted. And that's because it was filled not with cherries or strawberries but ground chicken liver. And nothing could possibly sound less interesting, except it was one of the most delicious things I've ever had, and every single person I've pressed it on has had the same exact reaction.

It's good, but you won't kiss anyone after.

3 heaping tablespoons flour (or less, if you like very thin crepes)

6 tablespoons corn or sunflower oil, plus additional for cooking the crepes

Kosher salt and pepper, to taste

1. Clean the livers — rinse, and cut off any film stuck to them — and pass the liver and onion through a meat grinder set to a fine grind, or pulse in a food processor until the mixture turns liquid.

2. Combine the liver mixture with the eggs, flour, oil, and salt and pepper. You're making batter for bliny, or crepes. "The first blin always comes out sideways," as Ukrainians say about far more than bliny. A little batter hides all our sins. — Oksana

3. Warm a small (8- to 9-inch) crepe pan or nonstick skillet over medium-low heat. Add a tiny amount of oil (or cooking spray), give it a little time to warm up, and roll it around so it covers the whole pan.

5. After three minutes or so (two if the crepe is thinner), the crepe should be sufficiently browned underneath and crisp around the edges for you to be able to use a spatula or a fine-tipped wooden skewer to lift it up. Now you have to flip to the other side; the difficult truth is that there's no better instrument than your fingers, if they can withstand the heat. If the crepe is a bit thicker, a spatula will do the job. (As in the recipe for whole chicken stuffed with crepes, don't worry if you tear the crepe: You can "darn" the hole — "reanimating," Oksana calls it, as if the crepe is a flatlined patient — by pouring a little new batter to fill it). After 2 minutes or so on the other side, flip again for a final 30 seconds, and set aside.

6. While the crepes are cooking, mix the mayonnaise, garlic, and most of the dill. (Save a little for garnish.) The creaminess of the mayonnaise works well with the tang of the garlic, the earthiness of the dill, and the taste of liver in the batter, but of course, the filling can include, or exclude, whatever you like.

7. Spread each liver pancake with the mayonnaise mix, layering the pancakes on top of one another until you have a stack you can cut into like a pie. (You may wish to make sure you have enough filling by laying out all the crepes and dolloping even amounts of filling onto each before proceeding with the stacking.) Decorate the uppermost layer generously with dill. Consistency and flavor are best after two hours in the fridge. Good both cold and warmed up.

This story was produced for radio by Catherine Whelan and Reena Advani, and adapted for the Web by Petra Mayer.