Accessibility links
United Methodist Church Votes To Keep Bans On Same-Sex Weddings, LGBTQ Clergy Delegates rejected change despite a Virginia pastor's warning: "You will be putting a virus into the American church that will make it very sick, and it will be sick quickly." 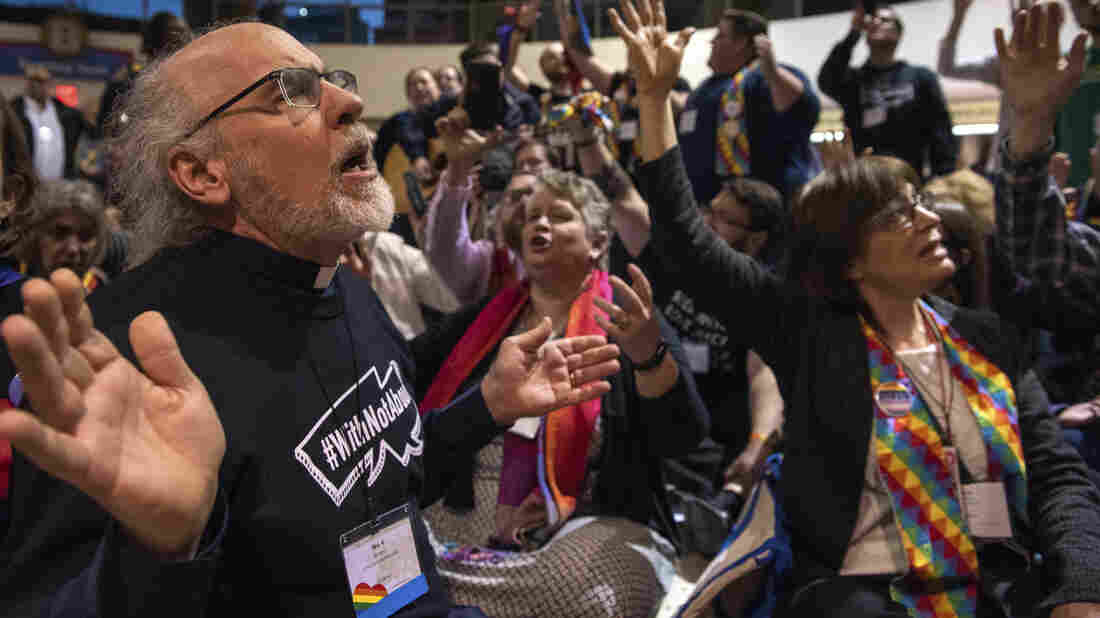 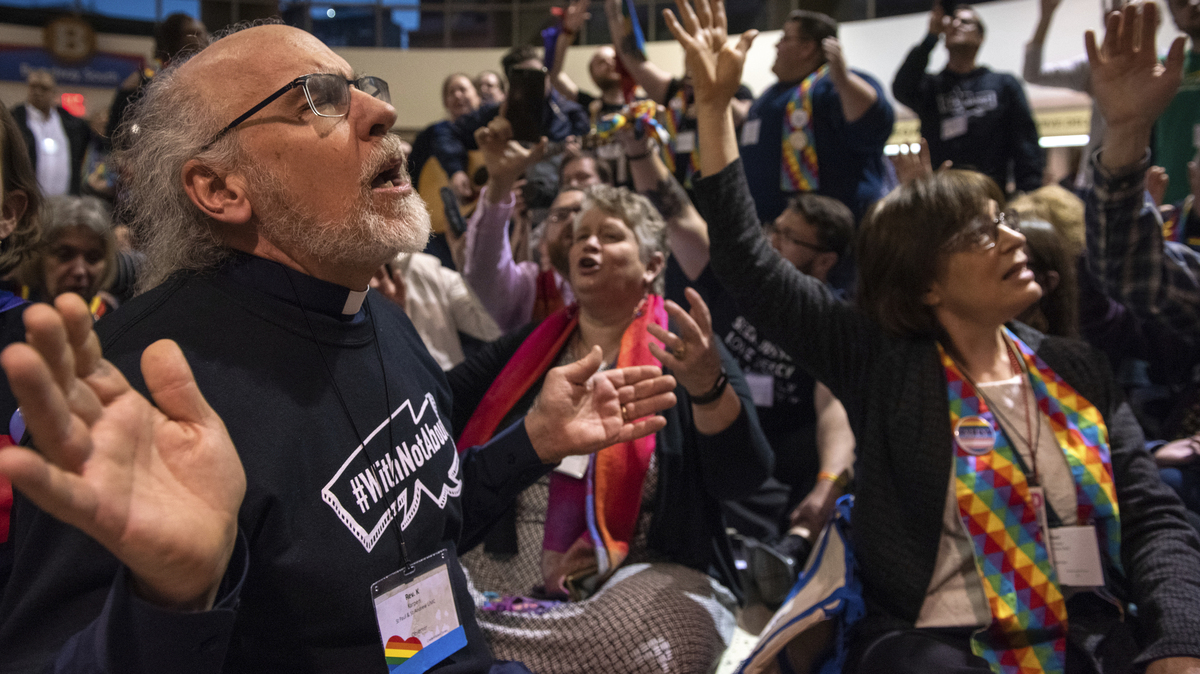 Protesters sing and pray outside the United Methodist Church's special session of the general conference in St. Louis on Tuesday. Delegates voted to maintain current rules against LGBTQ clergy and same-sex marriage.

Leaders of the United Methodist Church have rejected the One Church Plan, a measure that would have eased restrictions on LGBTQ clergy and same-sex marriages, with delegates voting against it at a special session of the church's General Conference.

On Tuesday afternoon, delegates from around the world voted 438 to 384 to pass what was called the Traditional Plan, which maintains the church's rules.

Earlier, delegates also had defeated the One Church Plan, which would have allowed individual churches to decide how they handle issues of same-sex weddings and the sexuality of their clergy.

The Traditional Plan prevailed, despite impassioned warnings from delegates such as the Rev. Tom Berlin of Virginia — who compared it to a virus that would cause a dire sickness in America's Methodist community.

The standoff over hotly contested aspects of church doctrine played out in St. Louis, where delegates were meeting for this week's special session of the General Conference. There, clergy and lay members of the church weighed how to respond to a 2018 report from a special church commission on revising the Methodists' guiding Book of Discipline.

When it formed the commission, the Council of Bishops said it had heard many criticisms that the Book of Discipline "contains language which is contradictory, unnecessarily hurtful, and inadequate for the variety of local, regional and global contexts."

The report focused on sexuality and ways to strengthen the unity of a religious body that's home to a wide variety of views. And as the conference has shown, there is a wide diversity of deeply held opinions about those views. The bishops had recommended endorsing the One Church Plan.

United #Methodist leaders gather to pray on the last day of their conference in St. Louis.

The conference was also taking place at a time when, as St. Louis Public Radio's Shahla Farzan has reported, an increasing number of Methodist clergy have come out as gay. Amid the discord over the rival plans, supporters of change are left considering whether to remain in the church — and what the result says about their institution.

Jeffrey Warren, a young gay delegate from the Upper New York Conference, told fellow conference attendees on Monday that he evangelizes on his college campus — and that he has success in reaching people for an important reason.

"They said they have not heard this message before," Warren said. "They didn't know God could love them, because their churches said God didn't."

For anyone who missed it. #GC2019 pic.twitter.com/2aHcw0CLL4

Trying to marshal support for the One Church initiative on Tuesday, Berlin of Virginia called it the "only shot at change" for people who want to lift blanket bans on same-sex couples who want to wed and on LGBTQ members of the church who want to be ordained.

"I doubt you're going to get a better offer today," Berlin said in his minority report speech, addressing delegates who might have withheld their vote because they felt the plan didn't go far enough.

"To those who would like to maintain the current Book of Discipline, you can still have it that way," Berlin said, adding that pastors would not be forced to perform same-sex weddings and churches wouldn't have to change their practices.

On the other hand, Berlin warned, there would be dire consequences if the Traditional Plan were to be embraced — particularly for Methodist churches in the U.S., where they represent the country's second-largest Protestant denomination.

"You will be putting a virus into the American church that will make it very sick, and it will be sick quickly," Berlin said, adding that however it's intended, the Traditional Plan will be perceived as an overt act against gay church members and others.

"Many of us have members who will leave," he said, adding that he had already gotten texts and other messages to that effect in the aftermath of Monday's initial vote.

"Many pastors are going to lead their church away from the connection. Some conferences will leave, I believe," Berlin said.

"Other people will stay and fight. And they will do weddings; they will break the Book of Discipline; there will be trials; it will be in the news," he said, adding that the focus will shift away from any good the church accomplishes.

"It's going to be about the people we don't serve," Berlin said, "and the disagreement that will continue."

Berlin, who is the lead pastor of Floris United Methodist Church in Herndon, Va., added that a "virus of conflict" would then cross from the U.S. into churches in other countries.

Berlin urged anyone who is against the minority report to abstain from voting or to reject the Traditional Plan so the church would maintain its current status quo.

"I'm asking you to wash your hands of this Traditional Plan today," Berlin said as his supporters applauded, "because it will bring that illness into our house."

That triggered a number of speeches for and against the idea.

In opposition, Cara Nicklas of Oklahoma faulted the way the impassioned debate has played out over the church's competing plans.

"By those advocating for the One Church Plan, I was either told explicitly that I am mean-spirited and unloving for holding to the church's doctrine on same-sex relationships, or the general tenor of the communications implied that I am unloving if I don't agree to change the church's Discipline. I don't love all, I am told."

"When that is the message — when gay persons become convinced I don't love them because I don't condone their behavior, it hurts my relationships with them," Nicklas said.

The way the plan has been discussed is harmful, she said.

"You surely don't want to be united with me, if I am as mean and unloving as I am accused," Nicklas said. "If the One Church Plan passes, I'm certain you will not stop trying to make me fit your idea of a loving person."

Nicklas called it "a false narrative" that the One Church Plan would end the crisis or allow free choice.

Also speaking against the plan was Nancy Denardo, a lay delegate of western Pennsylvania, who cited the Bible's mention of marriage as being between a man and woman in the Book of Matthew.

"The One Church Plan does not agree with the words of our savior," Denardo said, warning that it "deceives young persons into believing that same-gender marriage is OK with God — when clearly it is not."

"The word became flesh — not the flesh becomes the word," Denardo said. She added, "I'm truly sorry if the truth of the Gospel hurts anyone."

After those speeches, Rey Hernandez of the Philippines East delegation rose to speak in favor of the alternative plan, saying it embraces the diversity of today's church and would help spread the Gospel.

"The One Church Plan ... reflects reality, the reality that we're trying to reach," Hernandez said.

On Monday, the Rev. Byron Thomas of the North Georgia conference compared the dilemma to the church's earlier handling of race.

"In 1939, the UMC was trying to figure out what to do with black people. At that GC, the Central Jurisdiction was voted into being. The late Bishop Thomas wrote that the white folks stood up and clapped, and the black folks sat down and cried," Rev. Bryon Thomas of North Georgia

"In 1939, the UMC was trying to figure out what to do with black people," Thomas said, as quoted by the Iowa conference. "At that GC, the Central Jurisdiction was voted into being. The late Bishop Thomas wrote that the white folks stood up and clapped, and the black folks sat down and cried."

"I believe we are at another stand up and clap, sit down and cry moment," Thomas was quoted as saying Monday.