Accessibility links
Pakistan Says It's Holding Indian Pilot After Jet Shot Down In Cross-Border Airstrike Both sides claim to have shot down the others' warplanes in what amounts to a major escalation of tensions between the rival nuclear powers. 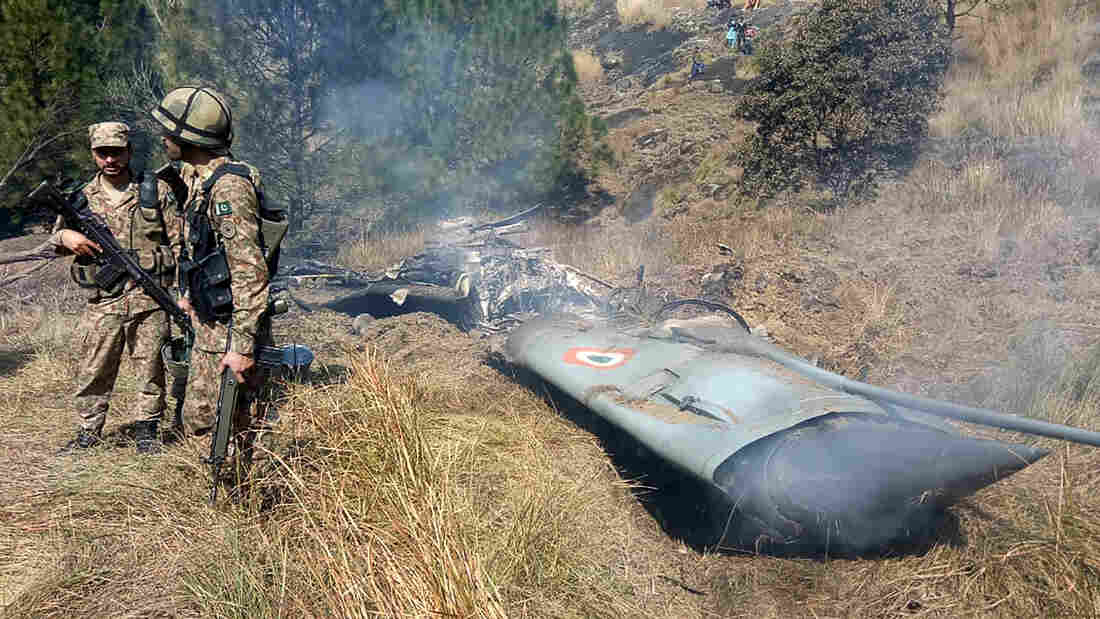 Pakistani soldiers stand next to what Pakistan says is the wreckage of an Indian fighter jet shot down in Pakistan-controlled Kashmir in the Bhimber district near the Line of Control on Wednesday. AFP/Getty Images hide caption 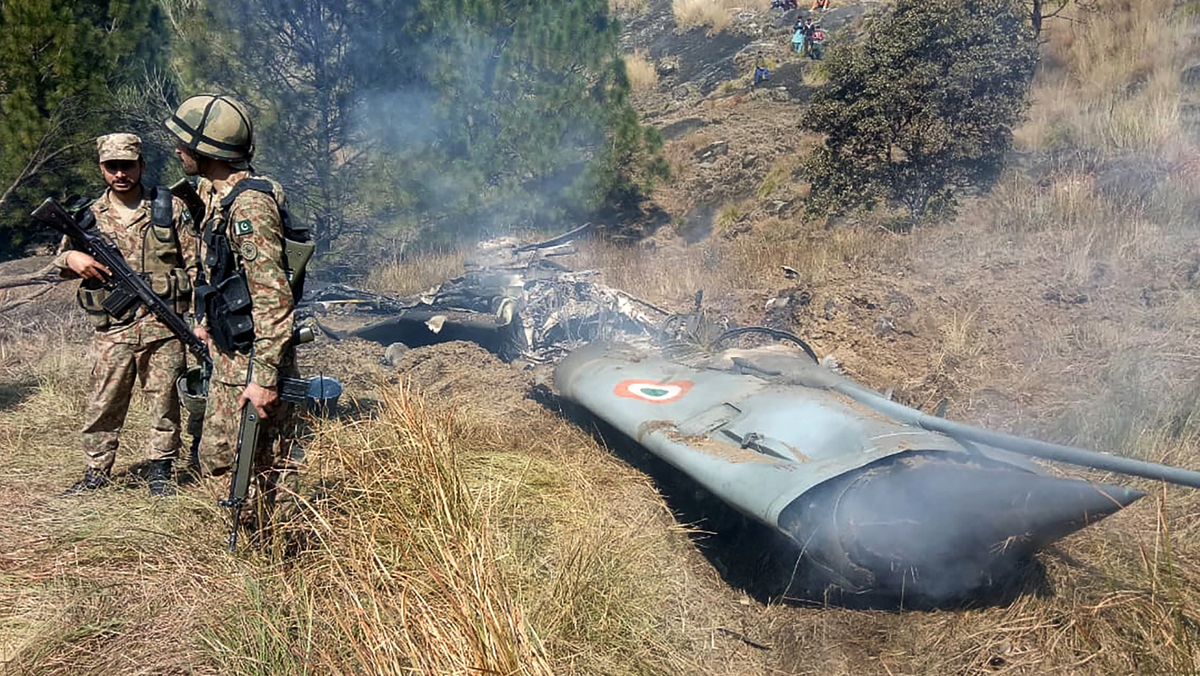 Pakistani soldiers stand next to what Pakistan says is the wreckage of an Indian fighter jet shot down in Pakistan-controlled Kashmir in the Bhimber district near the Line of Control on Wednesday.

In a dramatic escalation of violence over their shared Himalayan border, India and Pakistan both claimed Wednesday to have shot down each other's fighter jets, and video emerged of a bloodied, blindfolded Indian pilot in Pakistani custody.

Both countries accused the other of invading rival airspace. India confirmed the loss of one of its MiG-21 fighter jets in an "engagement" with Pakistani forces and acknowledged its pilot was missing.

On Tuesday, India responded with an airstrike on what it described as a militant training camp inside Pakistan, saying it had killed "a large number of terrorists." However, Islamabad disputed the claim, saying that while India's warplanes had entered Pakistani airspace, they were forced to drop their bombs in an empty field after Pakistan air force jets were scrambled to intercept them.

In video circulating on social media in both countries, a blindfolded man with a bloodied face identifies himself in English as Wing Commander "Abhinandan," and the camera pans to an Indian air force logo on his jacket. He reads aloud his military identification number and asks his captors if he is in the custody of the Pakistani army. NPR could not independently verify the video.

In another clip airing in Pakistani media, the pilot's blindfold is removed. He sips tea and says he's being treated well by the Pakistani military, calling his captors "thorough gentlemen." He refuses to answer questions about his hometown and exact job.

A spokesman for Pakistan's military also tweeted a photo of the same man in the tea clip, identifying him as "Abhi Nandan" and saying that he "is being treated as per the norms of military ethics." He also clarified that Pakistan was holding one pilot, not two, as it previously said.

In a text message sent to foreign correspondents in India, a spokesperson for India's Ministry of External Affairs called the videos "vulgar" and suggested they violate "all norms of international humanitarian law and the Geneva Convention." It said that India had summoned the acting high commissioner of Pakistan — the equivalent of an ambassador – to the Ministry of External Affairs in New Delhi to lodge a "strong protest" against the day's events.

"It is not in Pakistan's interest to let our land be used for terrorism. There is no dispute there," Khan said. "Yet, I had still feared that India would [ignore the offer and] still take action, and I had therefore warned India against aggression and said we will be compelled to respond because no sovereign country can allow that [violation of its sovereignty]."

In response to PAF strikes this morning as released by MoFA, IAF crossed LOC. PAF shot down two Indian aircrafts inside Pakistani airspace. One of the aircraft fell inside AJ&K while other fell inside IOK. One Indian pilot arrested by troops on ground while two in the area.

In a statement from Pakistan's Foreign Ministry released on Wednesday, officials said the air force "undertook strikes" across the unofficial demarcation that divides Kashmir between Indian and Pakistani areas of control.

The statement said that Pakistan had sought to "avoid human loss and collateral damage" and had conducted the strikes with the "[s]ole purpose being to demonstrate our right, will and capability for self defence."

We have no intention of escalation but are fully prepared to do so if forced into that paradigm," the statement said, adding that India's earlier strike had been aimed at "so-called terrorist backers without a shred of evidence."

Pakistan's ambassador to the United States, Asad Majeed Khan, told reporters in Washington Wednesday that the U.S. didn't condemn the Indian airstrike, and that was "construed and understood as an endorsement of the Indian position, and that is what emboldened them even more."