Accessibility links
Book Review: 'We Set The Dark On Fire,' By Tehlor Kay Mejia Tehlor Kay Mejia's debut novel We Set the Dark on Fire is set at a posh girls' school in a dystopian world where the students are being trained for lives as political consorts to powerful men. 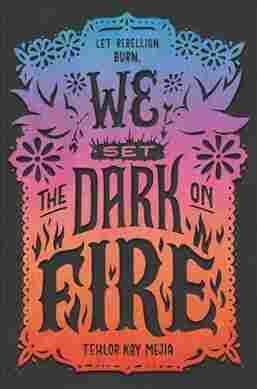 We Set the Dark on Fire

Tehlor Kay Mejia's debut novel We Set the Dark on Fire aims to burn it all down.

Daniela is graduating at the top of her class at the Medio School for Girls, an elite institution that trains girls to be wives. Divided into two groups — Primeras and Segundas, Dani and her classmates know that they will be offered in pairs to the rich young men whose families can afford to pay their dowries. Primeras like Dani are preparing to be skilled life-partners and social managers, while Segundas, like her nemesis Carmen, are destined to be objects of beauty and desire and bear children.

When Dani is chosen as Primera for the son of Medio's chief military strategist — who is rumored to be next in line for the presidency — she is fulfilling the destiny that she and her family have sacrificed so much to obtain. But instead of being elated, Dani is filled with dread. Two days before graduation, her deepest secret almost comes out: She was born on the wrong side of the wall that protects Medio from society's poor and disenfranchised, and was smuggled across illegally as a child. A resistance group saves her from discovery, but in exchange, they want her to spy on her new husband.

Torn between her desire to secure a comfortable future for her family and her burgeoning sense that spying for the resistance might be the right thing to do, Dani struggles to adapt to her new life. Making things even more complicated is the fact that Carmen, who spent years bullying her, is chosen as her Segunda. But as they spend more time together, their hatred turns to friendship, then blossoms into something deeper. No sooner has Dani chosen a side than she finds herself with another dilemma. What is she willing to sacrifice to protect a forbidden love that she never expected to have?

We Set the Dark on Fire is a book so timely it hurts. A girl smuggled across an unjust wall, forced to hide behind forged papers and live in fear for her family's safety is a painfully resonant image to anyone who watches the news. Mejia manages to walk a very tight line in evoking some of the injustices that are currently happening in America without being heavy-handed. The world she has created is its own place — it is not some dystopic near-future. But at the same time, it gives America's current "build a wall" rhetoric a very deliberate smackdown.

This is made all the more poignant by the fact that though this does not seem to be our world, Mejia has created a decidedly Latin American setting. People usually evoke the South American masters of magical realism when discussing new books trying for that genre, and We Set the Dark on Fire is not magical realism. But the setting reminds me a little of the work of Isabel Allende all the same, especially The House of the Spirits, which deals with post-colonial political upheaval in Chile.

Mejia manages to walk a very tight line in evoking some of the injustices that are currently happening in America without being heavy-handed.

Another book that inevitably that comes to mind - they're actually calling it out it in the marketing materials - is The Handmaid's Tale. While the comparison is fair, We Set the Dark on Fire is definitely written for young adults in a way that The Handmaid's Tale is not, resulting in a book that feels less cynical. There's something very powerful about centering Dani and Carmen's queer, Latina love story and making it defiantly sensual and romantic in the midst of all of this world's sexism and prejudice. This isn't a story about a woman having her privilege stripped away until she understands subjugation and finds her defiance. It's about a girl who knows she has privilege because she spent her childhood without it, and who knows exactly what fighting will cost her. She must decide what to do with the power she has worked for.

This talk of resistance and privilege might make it seem like We Set the Dark on Fire is a grim, politics-driven screed, but that could not be further from the truth. It's a gripping book, easy to race through despite the difficult and timely issues at its core. I felt lifted up by the joy of Dani and Carmen discovering each other and their own capacity for happiness — a lesson we would do well to carry in our hearts through the hard work that lies ahead in our own world. While there are some slight debut novel imperfections in the flow of the plot and climactic build, We Set the Dark on Fire burns bright, and I hope it will light the way for a new generation of rebels and lovers.