Accessibility links
Women Show The Faces Of War In 'The Huntress' Kate Quinn's new thriller puts women's experiences front and center in the story of a former Soviet "Night Witch" pilot chasing down an escaped Nazi known as The Huntress in the years after the war. 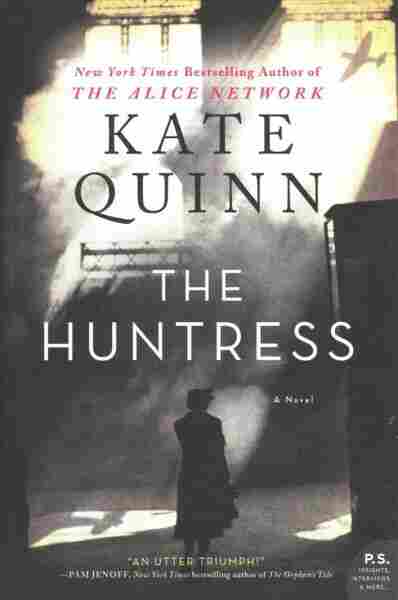 Kate Quinn's The Huntress runs on a bit too long, but once you've read her Author's Note and understand that many of her characters are based on real people, real people who include the craven and the heroic, you'll understand why Quinn has stuffed her book with plot.

You'll also see, I hope, that The Huntress reads like the best World War II fiction, stories in which that war means many people had to inhabit gray areas even after it was over. What works best here is Quinn's juxtaposition of a Nazi war criminal known as Die Jägerin (The Huntress), and a Russian "Night Witch" pilot who considers herself a true huntress — one who stalks prey as part of her very nature. These women show two faces of war, two bleak faces, and when was the last time you saw that in fiction? Quite often, even when they are brave, their experiences important, war fiction relegates women to the home front, the sidelines, the shadowlands. Quinn discovers and portrays women whose actions mirror those of the men more frequently given space in these books. (The Huntress herself is based on two real women, one a female camp guard named Hermine Braunsteiner, the other an SS officer's wife named Erna Petri; more on both of them in Quinn's Author's Note, as well.)

The plot unspools slowly, over several different timelines: Pre-war Siberia, the wartime Eastern Front, and in late 1940s and early 1950s Boston. In the first, a neglected and abused teenaged girl named Nina Borisovna escapes to Moscow and discovers her passion for flight, eventually training to be a pilot with the other Night Witches — so named by the Germans because they flew their ancient wooden biplanes by night to drop bombs on enemy encampments.

Two men, the British Ian Graham and the American Tony Rodomovsky, first meet in postwar Boston. Their shabby, ragtag office of war-crime hunters remains essential to them both for different reasons: Ian's beloved younger brother died behind German lines, and polyglot Tony wants to avenge his lost Jewish relatives. Capturing Die Jägerin, who was known to have murdered six Polish children (among other crimes), remains their goal.

We know that Nina, Ian, and Tony will eventually wind up in Boston, because we've already met 17-year-old Jordan MacBride, a budding photographer whose widowed father Dan has just brought home a new love named Anneliese Weber, who has a sweet four-year-old daughter named Ruth. Anneliese, who is always bandbox-perfect and cooks a mean schnitzel, doesn't like to talk about The War. No wonder, since Jordan (who has glimpsed, through her lens, a certain cruelty on her stepmother's face) soon discovers a swastika-bedecked medal hidden in "Anna's" bridal bouquet and a suspicious photo hiding in her Bible.

When Anna accuses Jordan of searching her room and Jordan confesses, a certain amount of truth comes out. Dan believes his impeccable new wife's story of marriage to an SS officer and her struggle to get to the United States. It won't be until several years later that Jordan and Anna spar over the story again, by which time Jordan knows that Anna is no ordinary German.

The hunt's the thing, and Quinn lays plenty of traps for her villain

We all know. The hunt's the thing, and Quinn lays plenty of traps for her villain. Strangely, Anna seems to believe she's covered all her tracks, despite Jordan's finds. But history puts paid to my skepticism; all too many former Nazi criminals believed themselves safe and anonymous in new lives around the globe. Anna relaxes into her new life, thinking no one cares any more.

That's what makes Ian my favorite character in The Huntress. Not only does he care, he is adamant that perpetrators like Anna not be killed, but brought to justice alive. He admonishes Tony not to hurt a quarry: "The weight of his sins caught up to him, not my fist." Tony and Nina argue with and tease him about his rigid moral code, but it was and is characters like Ian who put war criminals before tribunals. Ian, the product of an upper-class British upbringing who eschews his father's traditional ways — yet uses them when he needs to — may not be as lustily alive as Tony or as kind and decent as Dan MacBride. He's something different, more than a witness, less than a judge.

And Nina, his twin as tentpole in this book, is also something different: A survivor whose scruples (or lack thereof) differ from Ian's, but whose word is just as trustworthy. If I could choose my own version of The Huntress, I'd untangle Nina's history as a Night Witch from all the rest — but that's why I'm not Kate Quinn. As she also mentions in her Author's Note, the plot hinges on Nina as Night Witch. So a bit long it may be. It's still engrossing, suspenseful, and authentic, a book to give you a new perspective on women, war, and the wheels of justice.