Accessibility links
Journalists Who Covered Cardinal Pell's Sex Abuse Trial May Face Charges More than 100 notices have been sent to reporters and media organizations for breaching a judge's suppression order in the trial of Australian Cardinal George Pell. 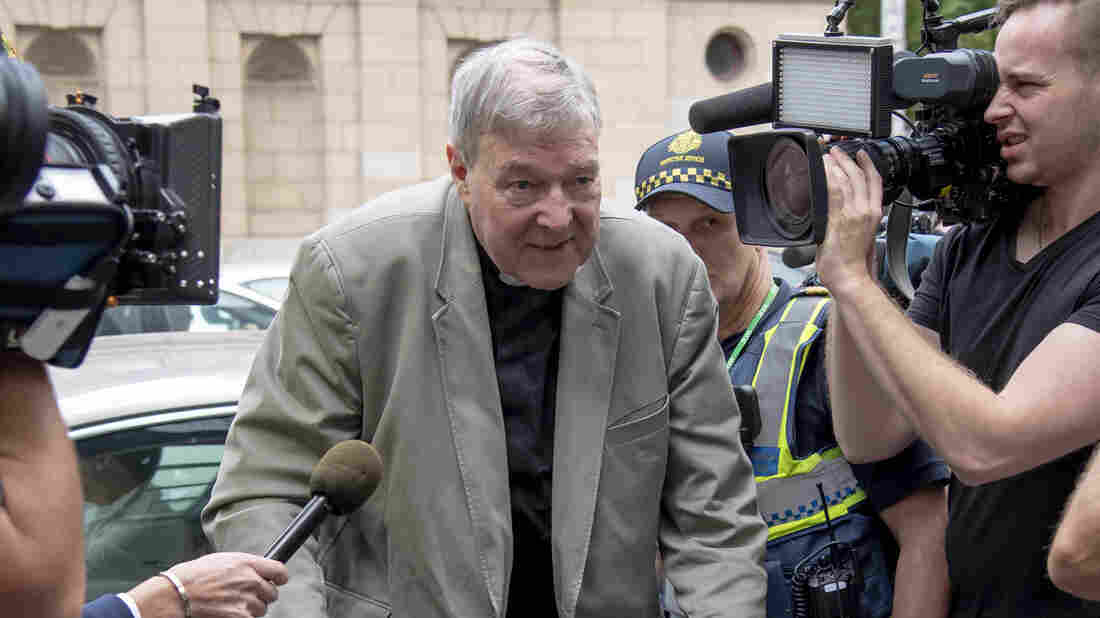 Cardinal George Pell at the County Court of Victoria in Melbourne, Australia, on Tuesday. He was convicted of child sex abuse, but journalists who reported on the case could face jail time for disobeying a gag order. Andy Brownbill/AP hide caption 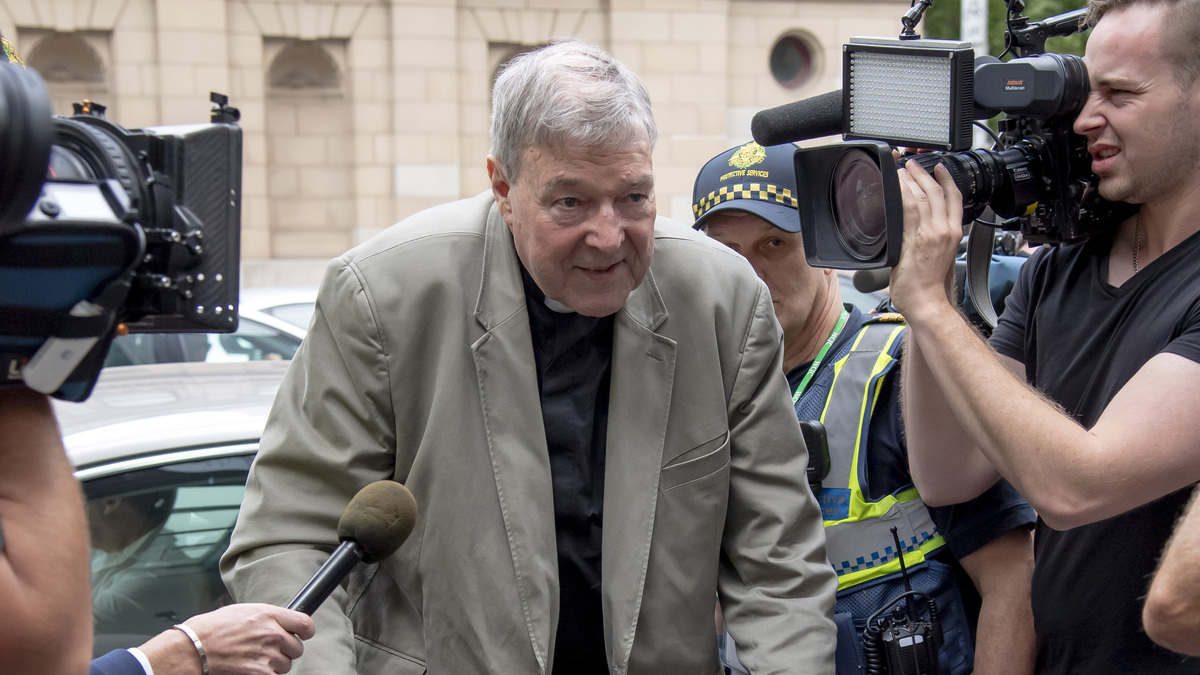 Cardinal George Pell at the County Court of Victoria in Melbourne, Australia, on Tuesday. He was convicted of child sex abuse, but journalists who reported on the case could face jail time for disobeying a gag order.

Dozens of journalists and media outlets that reported on the sex abuse conviction of the world's most high-ranking Catholic cleric ever charged with such crimes could face fines or jail time for breaching a gag order.

In December, a jury convicted Australian Cardinal George Pell, 77, of sexually abusing two 13-year-old choirboys decades ago. But before the verdict was handed down, Judge Peter Kidd in Melbourne's County Court of Victoria forbade details of the trial to be published, out of concern that it could influence the jury in a second trial awaiting Pell.

Not only could reporters not publish their coverage of Pell's trial but a blanket ban prevented them from even reporting that a suppression order existed, Jason Bosland, the deputy director of the Center for Media and Communications Law at Melbourne University, tells NPR.

As journalists walked into the open court for the proceedings, they were met at the door with a copy of the suppression rules, according to Reuters.

This week, after additional charges going back to the 1970s were dropped in the second trial, the gag order was lifted.

But now, more than 100 notices have been sent to journalists, bloggers and media organizations, Bosland tells NPR from Australia. Kerri Judd, director of public prosecutions in Victoria state, notified recipients of an intent to charge them with offenses for their coverage of the trial.

Bosland described the charges as not just violating the suppression order but aiding and abetting gag order breaches in international media, scandalizing the court, and sub judice contempt.

"This is a pretty unique situation," Bosland says. "There is some measure of surprise on behalf of the Australian media. I think they thought they were complying with the strict terms of the order."

Some publications tried to work around the suppression order. The Herald Sun featured a nearly solid black front page with the headline "CENSORED" and a short statement that it was being prevented from publishing important news. The Age reported that "a very high-profile figure" was convicted of a serious crime, but "we are unable to report their identity due to a suppression order."

International outlets such as the New York Times heeded the judge's order by refraining from publishing Pell's case online and didn't deliver one day's print edition to Australian readers. "Two Times journalists who have been covering the case would be at risk," the newspaper reported, adding that journalists charged in contempt of court could face up to five years in prison.

NPR's report on the conviction and gag order at the time focused mostly on how Australian news outlets were "grappling with how to handle one of the country's biggest news stories of the year."

The Washington Post, and publications without staff in Australia, chose to report on Pell's conviction. They saw their work spread on social media.

Bosland said he was not sure whether publications outside Australia had received notices. But Australia's media have "already been chilled by so many suppression orders being granted," he added.

Judges in Australia, as well as other countries, have been known to issue gag orders. Courts in the state of Victoria have issued hundreds of suppression orders each year.

The restriction can prevent prejudicing jurors and protect victims, witnesses and national security. But the Internet has presented new challenges by making geographical borders obsolete for media consumption.

The gag order in Pell's case was requested by the prosecution with backing from the defense, according to Reuters.

Melbourne lawyer Justin Quill is acting for a group of newspapers and TV outlets that plan to defend themselves against the charges, The Guardian reports.

Before the trial started, Pell denied the allegations. His lawyers said he had been scapegoated for the church's poor handling of clerical sexual abuse. Pell's lawyers will appeal the verdict.

One of his lawyers, Robert Richter, recently offered an apology after saying in court that Pell's crimes were "no more than a plain vanilla sexual penetration case." He apologized by describing the remark as a "terrible choice of phrase."

Earlier this month, the Vatican defrocked Theodore McCarrick, a former cardinal and archbishop of Washington, D.C., expelling him from the priesthood. A church tribunal found him guilty of sexually abusing both minors and adults.

Bosland says the gag order imposed on Pell's trial raises questions about the faith Australians put in jurors and their ability to separate information from prejudice. "One of the difficulties we have is we don't know how jurors come to their decisions in Australia," he says.

"There is a statutory prohibition that prevents media from soliciting interviews with jurors after a trial," Bosland says. And jurors "could potentially be liable for criminal offenses for talking about what goes on in the jury room."