Accessibility links
Frans de Waal's New Book 'Mama's Last Hug' Makes Case That Animals Have Emotions In his new book, primate behavior researcher Frans de Waal writes that "emotions are everywhere in the animal kingdom, from fish to birds to insects and even in brainy mollusks such as the octopus." 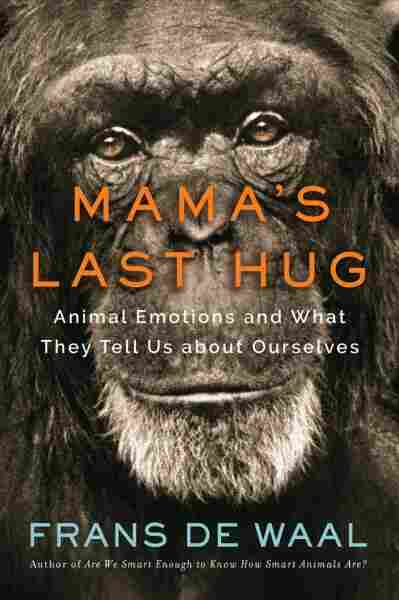 Animal Emotions and What They Tell Us about Ourselves

Rats' faces express joy when the animals are tickled.

Fairness matters to monkeys; when food offered to their social partners is of higher quality than what they themselves receive, they become highly agitated.

Pigs experience hope, which we know because if raised in decent conditions they anticipate that pleasurable things will happen to them.

As primate behavior researcher Frans de Waal writes in his new book Mama's Last Hug, publishing in early March, "emotions are everywhere in the animal kingdom, from fish to birds to insects and even in brainy mollusks such as the octopus." Through colorful stories and riveting prose, de Waal firmly puts to rest the stubborn notion that humans alone in the animal kingdom experience a broad array of emotions.

Mama, the animal of the book's title, was the matriarch of the chimpanzee colony at Burgers Zoo in Arnhem, the Netherlands. A skilled negotiator who exerted immense influence over the other chimpanzees in her group, Mama was an individual for whom de Waal felt enormous respect and affection: "I had never sensed such wisdom and poise in any species other than my own." (Thirty-seven years ago, Mama was already a memorable figure in de Waal's first book, Chimpanzee Politics.)

In 2016, at almost 59 years of age, Mama was near death. An elderly friend whom she had known for four decades but had not recently seen, biology professor Jan van Hooff, visited her to say goodbye.

As van Hooff crouches down towards the ailing chimpanzee, Mama reaches for his head. "She gently strokes his hair," de Waal recounts, and pulls him closer. "Her fingers rhythmically pat the back of his head and neck," reassuring her friend that it is okay to be so close. (Given chimpanzees' immense strength and sometimes volatile personalities, ordinarily it's quite dangerous for humans to approach them in this way. This encounter was a rare exception that occurred only owing to Mama's weakened state.)

A video of their encounter later went viral.

Mama is the hook for de Waal's broader argument, in which he chips away, example by example, at any notion of human exceptionalism in the emotional realm. A young chimpanzee habitually carries around the corpse of a dead rat and places it atop another ape who is asleep; the victim of this prank awakes and reacts with disgust, "loudly screaming and wildly shaking her body to get this ugly thing off her," he writes. Animals including coyotes and crabs, and our companion dogs and cats, scrap with others then celebrate their successes when things go their way: "pride [has] a long evolutionary heritage."

De Waal has never seen an ape ashamed of her mother or an elephant worried about his weight — our emotions, in other words, may be expressed in uniquely human contexts. Yet the claim that any human emotion is "fundamentally new" is false; our emotions originated in other species and then elaborated from there.

De Waal has no patience for accusations of anthropomorphism, the idea that we merely project our emotions onto other species; it's anthropodenial that worries him, a refusal to recognize the similarity between ourselves and other animals. In this regard, what de Waal does for animal emotion in Mama's Last Hug mirrors his treatment of the breadth and depth of cognition on display in the animal world in his previous volume, Are We Smart Enough to Know How Smart Animals Are?

No strict dichotomy exists between emotion and thought, however. In fact, as de Waal puts it, "Perhaps the greatest misunderstanding about emotions is that they are the opposite of cognition." Emotions guide organisms at every step as they evaluate what to do in any given circumstance.

One binary, de Waal does embrace: emotions versus feelings. Emotions are "bodily and mental states" detectable by others. Feelings, by contrast are "internal subjective states"; they are conscious experiences unknowable to others. "Anyone who claims to know what animals feel," de Waal says flatly, "doesn't have science on their side."

Yet de Waal himself has trouble adhering to that strict distinction. In describing Mama's last hug with van Hooff, he asserts, "She was happy to see him." That's claiming to know what an animal feels, and I don't see a thing wrong with that sentence. Like many other nonhuman animals, Mama is surely a self-aware being with access to her own subjective feelings. De Waal notes, after all, that animals who are able to consciously probe their own memories "also have the capacity to explicitly recognize the bodily upheavals that we call emotions."

Occasionally, de Waal overgeneralizes. It's startling to encounter this kind of gender stereotype: "Attractive women, especially those of childbearing age, are perceived as rivals by other women, which makes it hard for them to get their vote." De Waal even hints that John McCain's choice of Sarah Palin as his vice-presidential running mate in 2008 cost him the election because "male enthusiasm" for Palin harmed her standing among women.

De Waal is also more sanguine about the well-being of animals in zoos than I think is warranted. He acknowledges, though, that fish feel pain; decries the "dairy industry's horrific practice of separating calves from their mothers right after birth," and praises the "plant-based food revolution" already underway.

Through these powerful statements coupled with his convincing descriptions of animal emotions, de Waal contributes immensely to an ethical sea change for animals.