Accessibility links
Opinion: Trump's Failed North Korea Talks Could Lead To Real Deal The breakdown in talks between President Trump and North Korea's leader Kim Jong Un may turn out to be a blessing in disguise, writes Gary Samore, an experienced negotiator with North Korea.

Opinion: Why The Hanoi Summit Failure Could Lead To A Real Deal

Opinion: Why The Hanoi Summit Failure Could Lead To A Real Deal 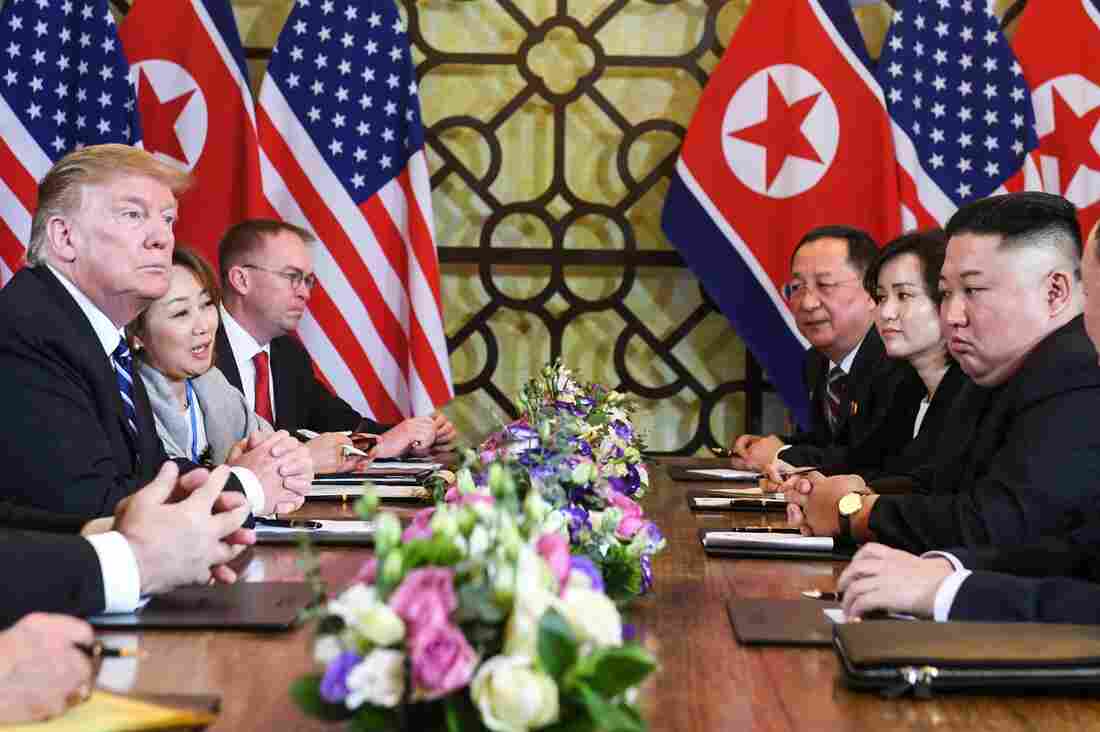 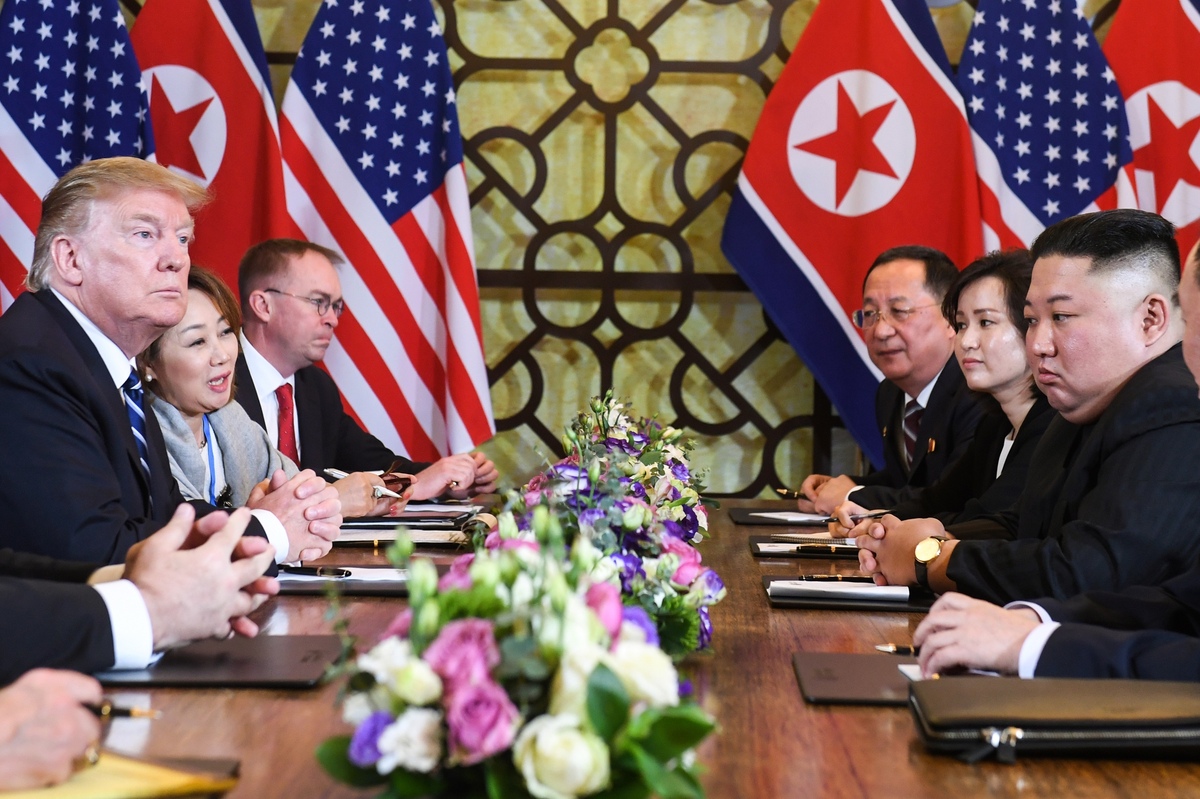 Gary Samore is a professor of the practice of politics at Brandeis University and the senior executive director of the Crown Center for Middle East Studies. He has participated in face-to-face U.S. talks with North Korea for over 25 years and is a former senior adviser on weapons of mass destruction to Presidents Barack Obama and Bill Clinton.

The failure to reach a deal on denuclearization at this week's summit in Hanoi, Vietnam, may turn out to be a blessing in disguise.

For President Trump, the failure demonstrates that his personal rapport with North Korean leader Kim Jong Un is no substitute for adequate preparations to resolve the difficult and complex issues involved in stopping the North's nuclear weapons program. To avoid another embarrassment, Trump is unlikely to agree to a third summit unless a deal has been precooked so that he is certain of enjoying a successful signing ceremony.

For Kim, the failure shows that he cannot bypass the U.S. government to get a sweetheart deal directly from President Trump. To the extent that the Singapore summit last year led Kim to believe that Trump is a soft mark, Trump's decision to walk away from Hanoi leaves Kim with little choice but to engage in traditional tough negotiations at the working level to get the sanctions relief he seeks.

Why Talks Between The U.S. And North Korea Abruptly Ended

Why Talks Between The U.S. And North Korea Abruptly Ended

What will happen next? While walking away from the table in Hanoi, Trump kept the door open to continue negotiations. He made clear that he is prepared (indeed eager) to continue the freeze on major joint U.S.-South Korean military exercises and meet with Kim for another summit if it would be productive. In fact, the United States had been pressing North Korea for working-level negotiations between Special Representative Steve Biegun and his counterpart Ambassador Kim Hyok Chol in the runup to Hanoi, but the North Koreans resisted until the last minute.

The failure to reach a deal on denuclearization at this week's summit in Hanoi may turn out to be a blessing in disguise.

There are two reasons to believe that Kim Jong Un will not abandon negotiations and will not resume nuclear and missile testing. First, North Korea has already made sufficient progress toward the development of thermonuclear weapons and long-range missiles so that a continuation of the moratorium on testing does not impose a significant technical price. Second, North Korea's economic duress is not urgent. Since Kim halted his testing campaign and shifted to a diplomatic campaign last year, North Korea has enjoyed substantial de facto sanctions relief as China and Russia have relaxed sanctions enforcement. A resumption of testing might provoke Beijing and Moscow to once again join Washington's campaign of "maximum pressure."

If North Korea agrees to resume working-level talks, three issues will dominate. First, both Washington and Pyongyang agree that the next significant step toward denuclearization requires constraints on North Korea's production of fissile material needed for a nuclear weapon, but they disagree on the extent of those constraints. North Korea has offered to "permanently dismantle" its nuclear facilities at the Yongbyon nuclear center. This would reduce the rate of production, but not halt production of fissile material because North Korea could continue to operate undeclared enrichment facilities outside Yongbyon. In contrast, the U.S. is seeking a comprehensive halt to fissile material production, which would require dismantlement of all such facilities, whether located within Yongbyon or elsewhere. The U.S. proposal would also require that North Korea allow international access to its secret nuclear facilities outside Yongbyon to verify that the facilities have been shut down and dismantled.

The second contentious issue is U.S. reciprocity. Both sides agree that the U.S. will take "corresponding measures" (in North Korean parlance) or "simultaneous and parallel" actions (in American parlance), but they disagree on the nature and magnitude of the U.S. steps. The U.S. has discussed proposals such as issuing a peace declaration formally ending the Korean War and establishing liaison offices in Washington and Pyongyang. What North Korea really wants is sanctions relief. As President Trump revealed in his Hanoi news conference after talks collapsed Thursday, the North Koreans demanded an extravagantly high price in terms of extensive sanctions relief in exchange for the modest step of dismantling Yongbyon. Naturally, the U.S. wants to expend as little leverage as possible for partial denuclearization steps, while retaining its biggest bargaining chips for the far more difficult challenges of reducing and eventually eliminating North Korea's nuclear and missile programs.

The third tough issue, as Secretary of State Mike Pompeo alluded to in Hanoi, is sequencing. North Korea wants to get paid upfront before the process of dismantlement is completed, while the U.S. wants to withhold payment until North Korea delivers on its commitments. Inevitably, any deal will require a complicated choreography of steps toward dismantlement matched by reciprocal actions by the U.S. and its allies, principally South Korea, which is eager to pursue economic projects with the North on generous financial terms. The details of such an arrangement can only be hammered out in lengthy negotiations between diplomats and experts from both sides.

Opinion: Trump Just Walked Away From The Best North Korea Deal He'll Ever Get

After the failure in Hanoi, the ball is in Kim's court to decide whether to abandon hopes of a quick and easy deal and authorize serious working-level negotiations to complete an agreement that he and Trump can sign at a third summit. The bet here is that he will. Whether Biegun and Ambassador Kim can work out an agreement within the limited time remaining in President Trump's first term is uncertain, but it's worth the effort.