Accessibility links
Federal Oversight Begins Friday For Chicago's Embattled Police Dept. The Chicago Police Department, under fire for years over its use-of-force policies, will try to establish trust in communities that have complained about treatment by officers. 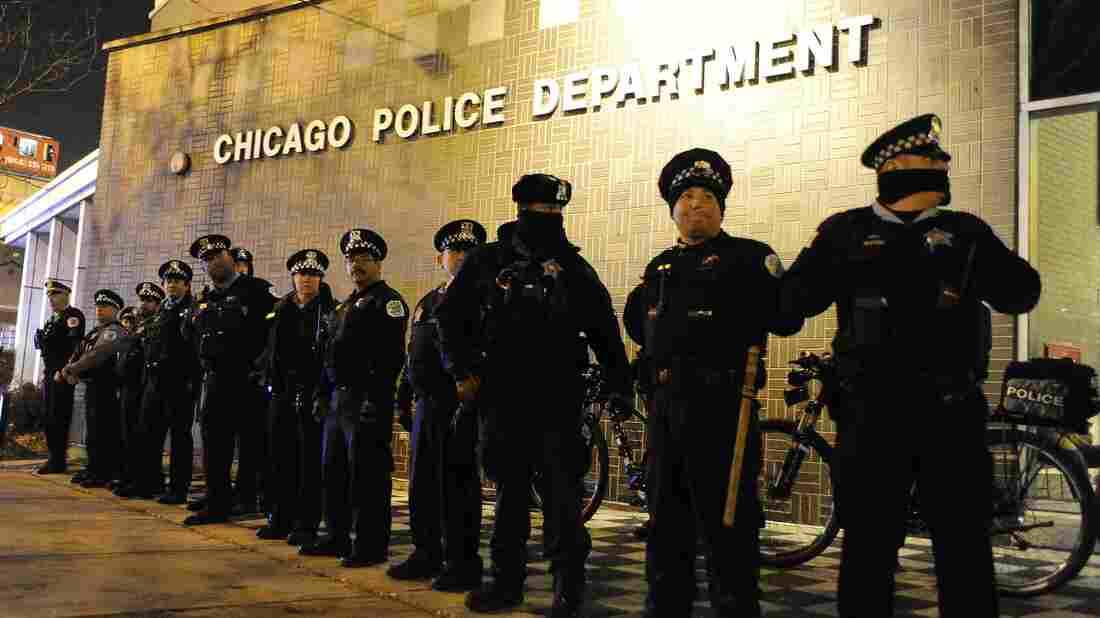 Chicago police officers line up outside the District 1 central headquarters during a protest of the police shooting of 17-year-old Laquan McDonald. The shooting death became a rallying cry for activists calling for police reform. Paul Beaty/AP hide caption 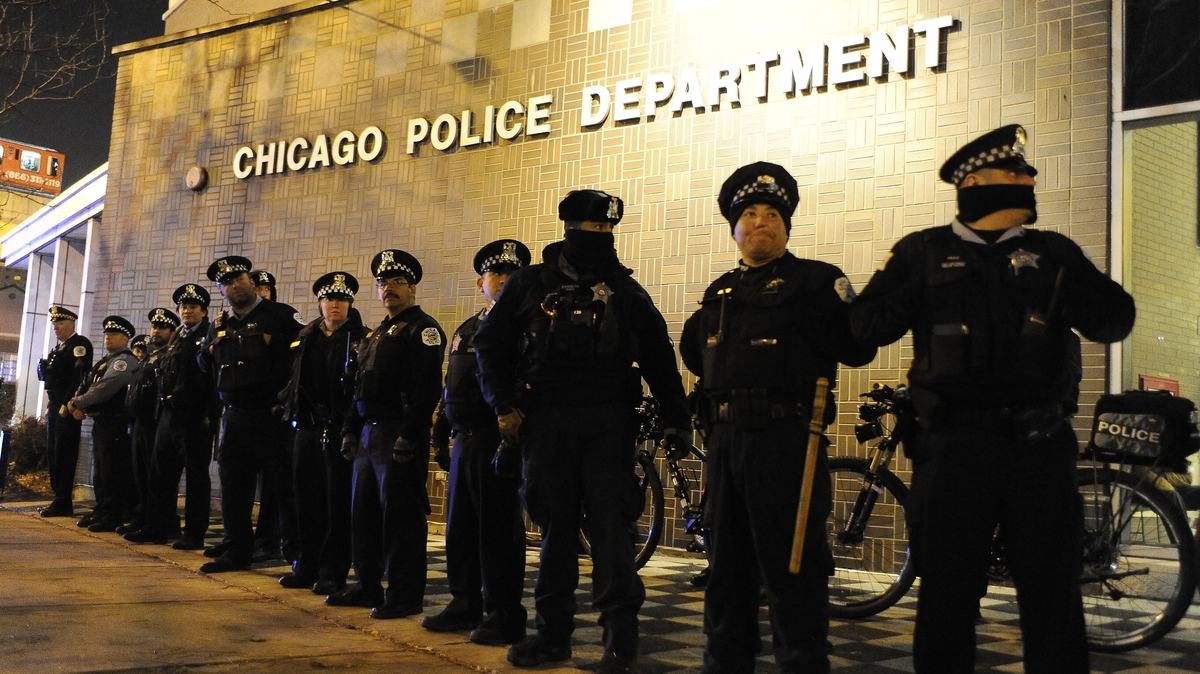 Chicago police officers line up outside the District 1 central headquarters during a protest of the police shooting of 17-year-old Laquan McDonald. The shooting death became a rallying cry for activists calling for police reform.

For many in Latino and Black neighborhoods, trust in the Chicago Police Department simply doesn't exist. Years of policies detailed in a blistering Department of Justice report explains why.

Many hope the formal events on Friday, Mar. 1, will help restore, or in some cases establish, a sense of trust in communities that have long felt neglected or abused.

Chicago police are now under federal oversight as the department officially begins its overhaul. A federal judge and independent monitor, named today, will oversee the changes to make sure they comply with agreed-to guidelines.

We say bring it on and let's get down to business.

"We've known about this consent decree for the last 2 years, so we're prepared mentally to have to deal with it," Johnson said. "Matter of fact, the consent decree will make us better. We say bring it on and let's get down to business."

Nearly four years ago, the city was embroiled in controversy over a police video. That video, withheld from the public for more than a year, was released and shows a white police officer fatally shooting 17-year-old Laquan McDonald, who is black. McDonald, a knife in his hand, appeared to be walking away from police.

The 2014 shooting and handling of the case became a rallying cry for activists. It also led to the trial and conviction of Jason Van Dyke, the officer who shot McDonald.

Between the shooting and the Department of Justice report, the department knew change would come. The withering DOJ report — issued in January of 2017 — called the Chicago Police Department's use of force excessive and racially discriminatory. Soon afterward, Chicago police issued a new use-of-force policy emphasizing the "sanctity of life," and started holding training sessions for officers.

Under the consent decree, there are many more changes in store. For example, the Department must produce a monthly report about use of force incidents; it bans police from using Tasers on people who are simply running away. The agreement also expands mental health services for police, including a initiative for suicide prevention — a big concern recently after a rash of police suicides.

"On a day when we marked a 44 percent decrease in homicides and a 24 percent reduction in shootings, today's data and today's agreement capture the new direction of the Chicago Police Department," Mayor Rahm Emanuel said in a statement. "This agreement, which is the result of the changes we sought and agreed to, will ensure a better city, a better CPD, and safer streets."

Chicago is among 14 other law enforcement agencies in the country under federal oversight. Among them, the police department in Ferguson, Mo. A fatal police shooting there sparked nationwide protests and helped spur the Black Lives Matter movement.

"You know, I'm going to have to say, that I've seen some incidents of improvement," Pulliam said. "There's a lot of resistance to a new practice of policing, a new way of policing the community from some police officers."

It's a different story for Seattle, says Mayor Jenny Durkan. After six and a half years of oversight, a federal judge said, in January, that Seattle's police department was in compliance.

"We still have a disproportionate amount of force being used against people of color that we feel we need to look at more carefully, but there has been a sea and cultural change," Durkan said.

Richard O'Neil, with Seattle's police union, remains critical of the decree and says it has damaged morale.

"Well, It was very frustrating from the beginning," he said. "The incentive to get out and be a proactive officer I think has been damaged and, something the city can't deny anymore, that we have [taken] a real hit in recruiting, retaining officers."

There are very specific ways that police in Chicago abuse their power.

Recruitment is a problem nationwide, even in departments without decrees. But the feelings of mistrust is something Chicago will have to deal with. Chicago officials and community activists say they've studied the consent decrees in other cities.

Sheila Bedi is an attorney with the MacArthur Justice Center. She represented activists and community groups in a successful fight to allow them to have a direct say in overseeing the court ordered reforms. She says that's different from other consent decrees: "There are very specific ways that police in Chicago abuse their power," Bedi said, "and it was critical that this consent decree couldn't just be imported from Seattle, for example. That it really addressed the particular harm that Chicago communities face."

The federal judge overseeing Chicago's police reform plan, Robert Dow Jr., says it's an important step in the city's ongoing effort to repair the damaged relationship between police and residents. Dow appointed a team of monitors on Friay who will ensure the department meets certain benchmarks.

He says the overall effort is no magic wand, but it is a beginning.